Bush plays naughty boy to the queen at his not-so-royal state dinner. But all those white ties couldn't hide his low poll numbers. 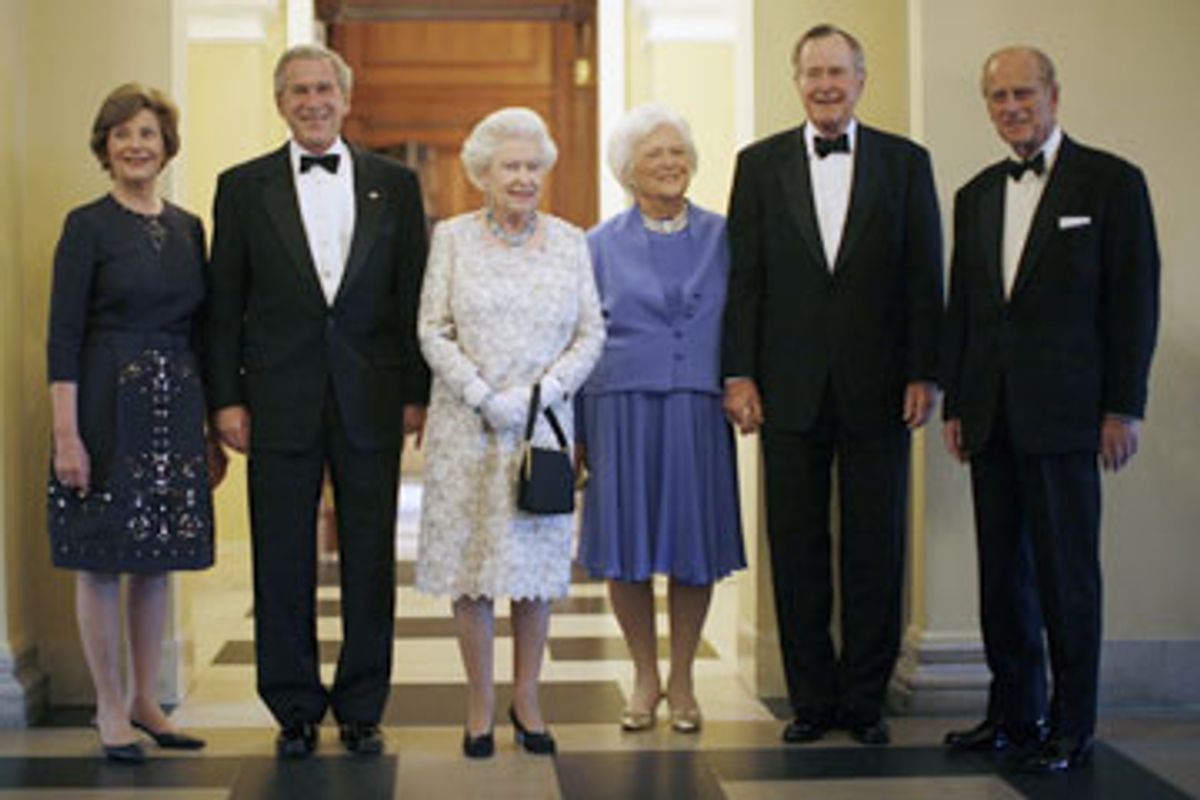 President Bush greeted Queen Elizabeth in Washington on Monday as a royal distraction from polls showing him as the most unpopular president since Richard Nixon resigned in disgrace. Bush has held the fewest number of state dinners of recent presidents, only four previous ones, but for the queen he staged a white-tie affair and even forced himself to stay up past his usual 9 o'clock bedtime.

The queen's events began with a welcoming ceremony on the South Lawn of the White House. "You've dined with 10 presidents," Bush read from his speech. "You helped our nation celebrate its bicentennial in 17 -- in 1976," he said, quickly recovering. He turned to the queen, smirked, winked, paused and then said to the crowd, "She gave me a look that only a mother could give a child."

Confronted with a dignified white-haired woman failing to participate in his shenanigans, Bush instantly equated her with his mother and her silence with disapproval. In his experience the most common look that a mother gives a child is censorious. The queen's presence instinctively prompted him to declare himself a naughty little boy.

Indeed, the queen and the president have had a mother-and-child-like history. During the queen's 1991 visit, then first lady Barbara Bush, anxious about her ne'er-do-well eldest son, instructed him not to speak to the queen. "The family never knows what he'll say in polite society," the Washington Post commented at the time. "Are you the black sheep of the family?" Queen Elizabeth asked him. "I guess that might be true," he said. "Well, I guess all families have one," she replied. He asked her who the black sheep was in her family. "Appearing from out of nowhere," the Post reported, Barbara Bush swooped from across the room to save the queen, shouting, "Don't answer that!" The queen maintained her regal silence and walked away from the impertinent prince. (The New York Times tells a slightly different version of that 1991 story.)

After presiding at a lunch for the queen at Blair House, across Pennsylvania Avenue, President Bush, walking back, heckled a Newsweek photographer, demanding that he admit it was "a special day" at the White House, and then berating him, "Then why didn't you wear something other than hand-me-down clothes?" The photographer, however, had not received the white-tie invitation.

That afternoon, the queen attended a garden party at the British Embassy for several hundred guests. Knots of neoconservatives surged toward the canapés. Neocon New York Times columnist David Brooks, in his best imitation of Uriah Heep, wrote of the event, "Although as a child I had turtles named Disraeli and Gladstone, I was never invited to sip Champagne with the queen until yesterday." Around a tent pole clustered the remnants of the Georgetown set that had once dominated Washington. Queen Elizabeth, attired in salmon from hat to shoes, slowly parted the sea of notables, stopping to speak to a very short elderly man, his jacket bedecked with medals -- Mickey Rooney. "What does one say upon being introduced to Mickey Rooney?" I wondered to one of the old Georgetowners standing near me. "How was Ava Gardner?" he replied.

Laura Bush, a former librarian, who has made reading her special cause, invited not a single American writer. Perhaps she feared that men and women of letters might use the occasion to protest the Iraq war. (On April 25, she remarked about the war, "No one suffers more than their president and I do when we watch this.") Also absent from the guest list were American artists, filmmakers and musicians, except violinist Itzhak Perlman, who performed after dinner.

Instead, Calvin Borel, the jockey who had just won the Kentucky Derby, 78-year-old golfer Arnold Palmer, football quarterback Peyton Manning (not related to British ambassador David Manning) and retired football player Gene Washington (Condoleezza Rice's escort) were summoned to embody American culture. The Washington Post, without the slightest ironic tone, described the dinner as the "most elegant Washington evening in a decade," or at least since Warren G. Harding played poker.