Thanks to George W. Bush, the man who was supposed to reinvent the Labor Party leaves office with more friends in America than in the U.K. 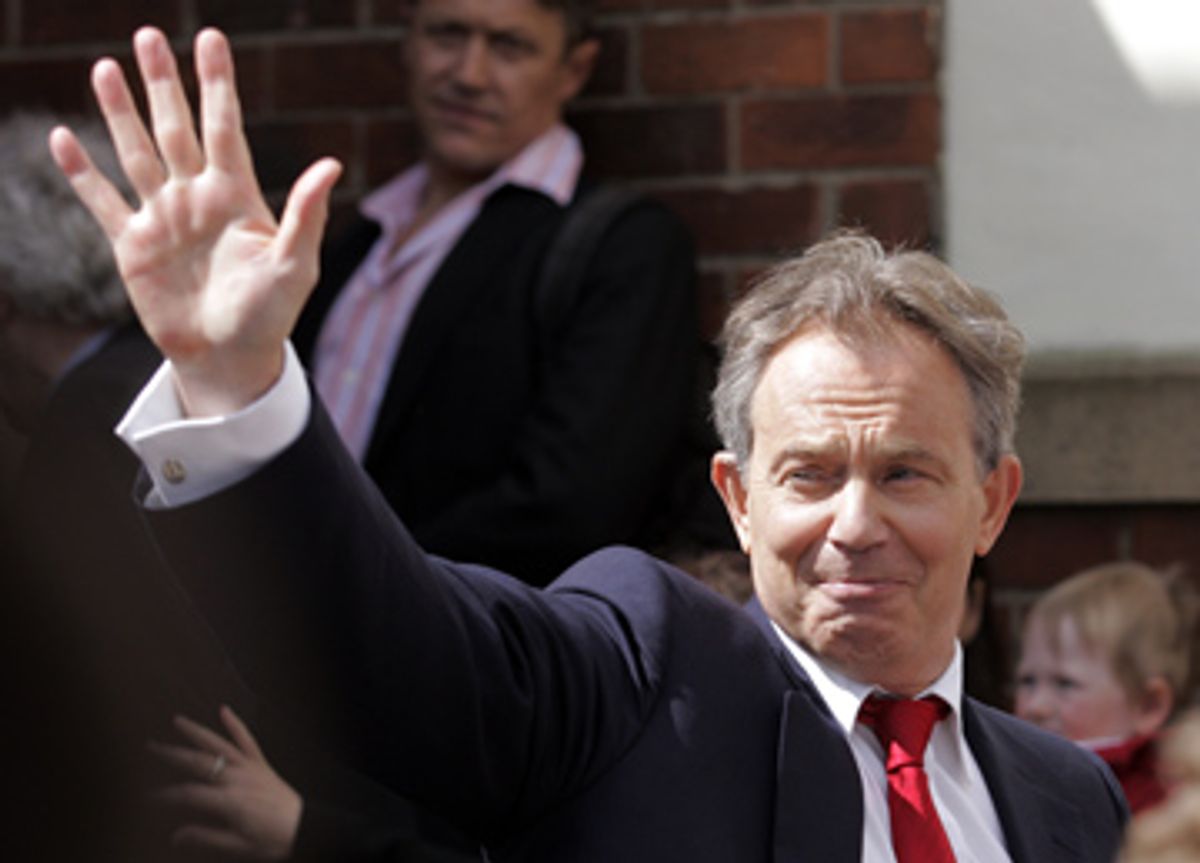 Tony Blair does not depart as hated as Margaret Thatcher was when she left 10 Downing St. It's not clear whether this is a measure of his success or of his failure. But the two prime ministers are profoundly linked. Both of them confronted Britain with necessary, uncomfortable truths about our diminished status in the world. And without her, Blair could never have amassed the enormous majority of his first election, even though she had been gone from office for six years.

At this distance the huge wave of popular revulsion toward the memory of the Thatcher government and all its works seems as unreal as the Diana hysteria, but election night in 1997 had an atmosphere of national vindication that I can only otherwise remember from global sporting events. "Were You Still Up for Portillo?" was the title of one book on the election, referring to the question people asked one another the next morning about the symbolic defeat of one of the most loathed and Thatcherite Conservative ministers.

For the first six or seven years of Blair's governments, it was literally unthinkable to elect the main opposition party, as the Tories continued to rip themselves apart in the aftermath of defeat. Now Blair has helped revive the Tories as a viable opposition, just as surely as Thatcher once helped reanimate Labor. He will also be emulating her in her post-government career. Both Thatcher and Blair believed Britain's fortunes lay in becoming a junior partner in the American empire. Having lost his job and squandered his reputation by hewing too closely to the imperial schemes of President Bush, Blair, like Thatcher, will most likely soon be earning much of his living on the other side of Atlantic.

Prior to the debacle in Iraq, for a long time, we trusted Tony Blair. The only segments of the population to regard him as wholly untrustworthy were tiny minorities: traditionalist Tories, outraged by his dealings in Northern Ireland and his ban on fox-hunting; journalists, who had to deal with the arrogant mendacity of his staff; and the small group around the chancellor (or finance minister), Gordon Brown, the man now most likely to take Blair's place as prime minister when he steps down on June 27. This is a pity because the chancellor was also his closest colleague.

The two men had been friends as well until 1994, when they decided -- as Brown believed -- that Blair would have a clear run for the leadership of the party, in exchange for a commitment to step down and let Brown have his turn. But the moment for hand-over kept getting postponed as Blair found more to do in the world, and might have been postponed indefinitely had it not been for Iraq.

Along with personal tensions caused by simple ambition, there were profound differences in their attitudes to the Labor Party. Brown was a true tribal loyalist who knew the party well and cared for it. Blair disdained the old party. He was first elected almost as a third-party candidate who would be neither Conservative nor Labor. Instead, he represented something he and his acolytes called "New Labor" -- a party, it was understood, that had nothing much in common with the one that Thatcher had defeated. Brown believed in New Labor, of course. He was one of its inventors. But he did not despise old Labor as Blair did, and it did not despise him.

But both men are devout Christians, something deeply unfashionable in Britain, and something that has been concealed, so far as possible, from the electorate. One of the most damaging questions ever asked of Blair in a television interview is whether he had prayed with President Bush -- to have answered "yes" would have made him look like a dangerous loony in the eyes of most of the electorate.

Both men, too, shared the belief that America, and the American model of globalization, were the unavoidable future. This may be the greatest casualty of Blair's time in office, though it's not at all clear what can replace it, either. To look at Blair's relationship to America is also, I think, to understand precisely how he continued Thatcher's attack on the traditional British state.

Until Thatcher, the British Isles were governed by a recognizably imperial system. The empire had gone, but the sort of people who had run it were still running Britain. This is of course the class that Blair belongs to. Under the old British class system money was important, but military prowess, or imperial service, mattered just as much. Traces of this still linger: The fact that Prince Harry is being sent to serve as a junior officer in Iraq is the most vivid illustration of the way in which position in British society is still validated by military prowess.

On the other hand, the British army has not been a serious instrument of national policy since Suez, the defining foreign policy disaster for the postwar generation. The Suez invasion in 1956 established that Britain (and France) could not fight a war without American support even in a country that had been part of our own colonial backyard.

If power in the new, post-imperial Britain did not grow from the barrel of a gun, then it could only arise from money. This was Thatcher's great insight. She turned on the traditional civil service, believing that business was always more efficient. Blair and Brown carried on her tradition of privatization and the gutting of the civil service. "Special advisors" and P.R. people fanned out across Whitehall to ensure that power would be concentrated in political hands; the traditional administrative caste was sidelined. Shortly before the outbreak of the Iraq war, I interviewed Douglas Hurd, who had been Thatcher's foreign secretary, and indeed a failed candidate for the leader of the Conservative Party, who lost because he was seen as too posh. He was certainly part of the old establishment, and he was horrified by the thought of the war, and said so. So were people like him throughout Whitehall and in the upper reaches of the army. All of that institutional wisdom was discarded by Blair because, like Thatcher, he had concluded that the only empire that made sense in the modern world was the American one.

"Get up the arse of the White House and stay there," he instructed an ambassador newly sent out to Washington.

This turned out to be a monumental misjudgment, as we know, but it is one that almost anyone might have made who could have been elected in this country. To look coolly at our own powerlessness produces a kind of despair that any British electorate will reject. Much better to suppose that we are in some ways participants in the American political process and have a share in American power.

In many ways, any British prime minister now is a tributary king, of the sort that we used to install in India and, before us, the Romans had on the fringes of their empire. The British army and air force use American weapons. Our navy has American nuclear missiles, and the fingers on their buttons are American. No British politician believes he or she could be elected without the support of the Murdoch press, owned by an American. But what's a barbarian king to do when the emperor is mad?

Blair's enthusiasm for the Iraq war may have come about because he believed in the power of the British army as a force for good in the world, but in a post-Suez, post-Falklands war, this power was entirely dependent on American goodwill. Before the invasion of Iraq he had already fought two and a half wars -- the Kosovo campaign, a peacekeeping intervention in Sierra Leone and the "Desert Fox" bombing campaign against Saddam Hussein.

Whether he actually believed the lies his own government told about the danger posed by Saddam Hussein is impossible at this distance for anyone to tell. Probably he himself could not answer the question. In the manner of great salesmen everywhere, he appears entirely to believe whatever he is saying as he says it. But in any case, he had no choice. Given that he knew the Americans were determined to invade, with or without British support, he seems to have believed that allowing them to be defeated on their own, and retreat into a snarling Weimar-ish despair, was the worst possible outcome. If the war had been won, Britain would have been on the winning side.

Perhaps no other prime minister, confronted with those choices, could have chosen differently. Britain is now too small and insignificant to make its way except as part of a larger political union. If you do not believe in the European Union -- and the British people don't -- then the only larger body available is the American empire. On the other hand, the empire doesn't care for us at all. No British prime minister except Thatcher and Winston Churchill can have been so much admired in America. Yet it is impossible to think of a single issue on which Blair has changed American policy.

Out of office, Tony Blair is likely to reinvent himself, or at least to confirm some things that we in Britain had long assumed. An Episcopalian, or Anglican, married to a Roman Catholic, he has been a Catholic in all but name for years now. He has long attended a Catholic church with his family. Persistent and very well sourced reports say that he will be formally received into the church soon after he steps down, and that the only thing to have held him back so far was the thought of the impact such a conversion would have in Northern Ireland.

And now he also goes off to his expected American reward. First, perhaps, he'll make a quick fortune on the U.S. lecture circuit, and then maybe he'll take a useful but not too demanding job in the service of the liberal wing of American foreign policy. Just like Margaret Thatcher, he will always be better regarded abroad than at home; just like her, it may turn out that his lasting domestic legacy was to make the opposition party electable.