How professional political operatives secretly control the news you read about the 2008 campaign. Hint: It involves the Drudge Report. 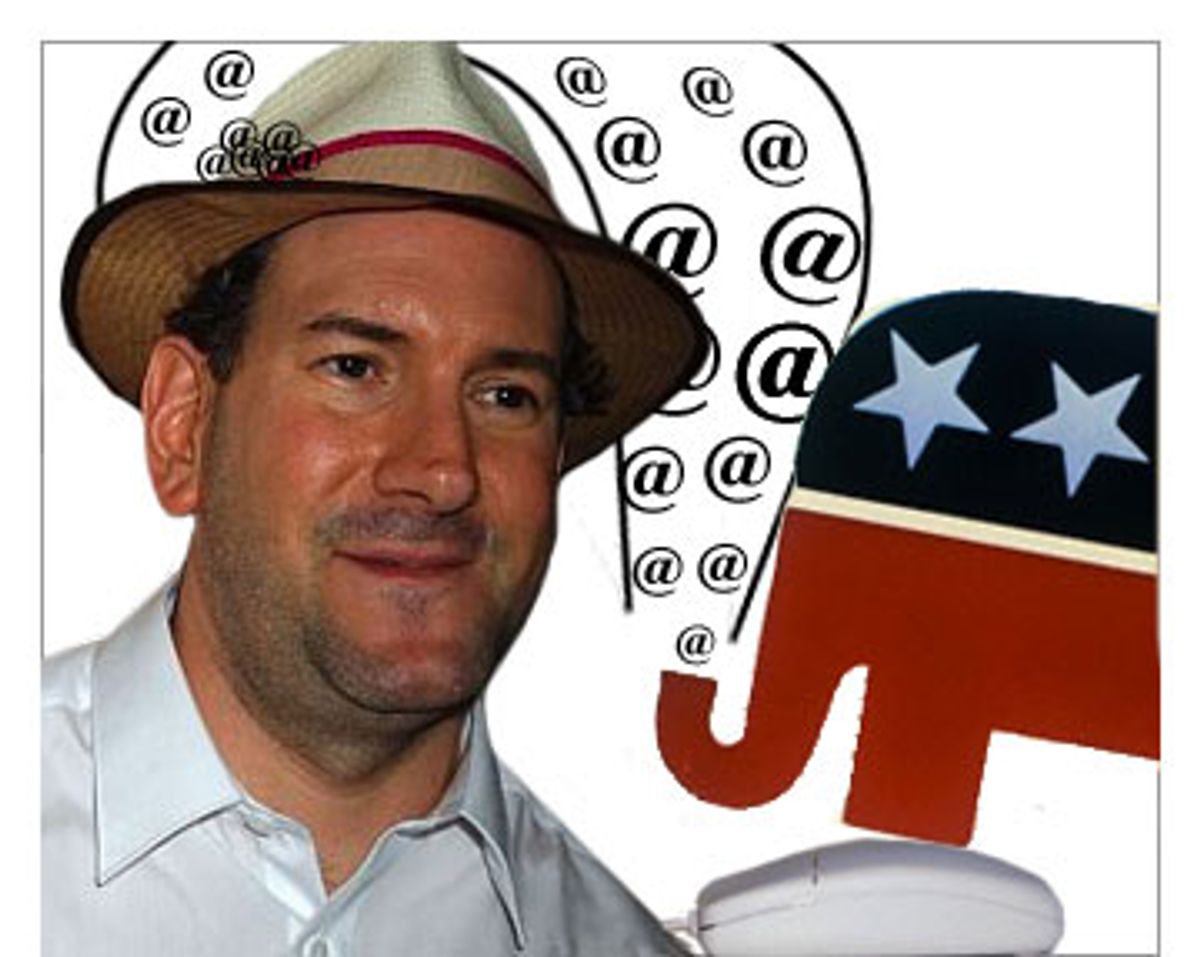 The reporters covering the Murrells Inlet, S.C., rally last month, where McCain jokingly parodied the old Beach Boys song "Barbara Ann" with the words "Bomb Iran," didn't think the joke was news. Only one writer, Scott Harper, from the local Georgetown Times, mentioned it in his story, and he relegated it to the 17th paragraph. "I didn't think Jay Leno would be talking about it," he said.

The Associated Press reporter on-site ignored the joke altogether, and focused his story on McCain's pledge to brief the public about Iraq on a biweekly basis if elected president. The reporter for the Sun-News, a local Myrtle Beach newspaper, also led with the press conference pledge and left out the joke. But then someone -- we don't know who, exactly -- sent a carefully edited video of the joke to Matt Drudge, who runs the most popular news blog in America and the premier outlet for anonymous political leaks from Republican insiders.

The next day, the Drudge Report headline blared, "McCain Sings: 'Bomb Bomb Bomb, Bomb Bomb Iran.'" Hours later, the Associated Press echoed Drudge by sending a new story over the wire, headlined "McCain Jokes About Bombing." By then the news was everywhere. Leno, Jon Stewart, each major television network and the big newspapers eventually mentioned the clip. That afternoon, McCain was caught on defense at a campaign appearance in Las Vegas, telling reporters to "lighten up and get a life."

As news events go, the "Bomb Iran" episode was surprisingly typical for the 2008 campaign. It resulted from an anonymous leak, most likely from a rival campaign, rather than the shoe-leather reporting of independent journalists. It was, in the lingo of the campaign trail, an "oppo dump," apparently compiled with the help of one of the vast, secretive propaganda machines housed in each of the major campaigns. In recent months, such invisible releases of information have often dominated the news cycle and have become ubiquitous for reporters covering the candidates. Official e-mails from campaigns regularly arrive in reporter in boxes with subject lines like "n/a," or "not for attribution." Unsigned white papers are delivered with damning facts about opponents' fundraising reports. Information is passed along by senior campaign officials in hushed tones on the telephone, only after the reporter has sworn never to reveal the source.

Both reporters and the campaigns benefit from this thriving black market of information, as does the public, in many cases, because noteworthy facts about the candidates are widely disseminated. But the growing profusion of campaign-driven stories has also sidelined traditional on-the-ground journalism, while at the same time misleading the public about the true source of information. Though reporters, and blogs like the Drudge Report, take credit for scoops, the news of the day is more often than not produced by the invisible hand of one campaign or another. Journalists long ago learned how to play the game. "Reporters will often call and ask proactively, 'What kind of dirt do you have for me?'" said one senior official at a presidential campaign who asked not to be identified.

Most of the time, the fingerprints of opposition research shops are untraceable. The first reporter to note the $400 haircuts of John Edwards, the Politico's Ben Smith, would not reveal to Salon whether he uncovered the fact himself from financial filings or had received a leak from a rival campaign. Similarly, Rick Klein, the senior political reporter for ABC News, declined a request to reveal how he uncovered last week the 13-year-old Planned Parenthood contributions of Mitt Romney's wife. Both stories may have resulted from impressive investigative reporting or from oppo dumps selectively leaked as a package of facts, gift-wrapped and tied with a bow.

In other cases, reporters do attempt to disclose the behind-the-scenes machinations that lead to news. When the Politico's Jonathan Martin reported last week that Rudy Giuliani had given money to a pro-choice group in the 1990s, he noted that the information had come from "aides to a rival campaign." Similarly, when the Hill reported last month that Mitt Romney had spent more than $1 million on early television advertising, the reporter admitted he had not directly asked television stations for the size of the ad buy. "A rival campaign compiled the data from the stations and provided it to the Hill," wrote the reporter, Alexander Bolton.

Of course, such leaks of prepackaged stories are not new. Throughout modern American political history, presidential campaigns have spent significant amounts of money on organized efforts to dig up dirt on their rivals and shape media coverage. What has changed is the pace and profusion of stories based on opposition research, especially this early in the campaign cycle. There are now more outlets clamoring for the information than ever before, and more competition from reporters for the latest "scoop." "I think you have to recognize that there is an extraordinary amount of media interest in this campaign," said Kevin Madden, the spokesman for the Romney campaign. "You have to recognize that there is a lot of competitiveness among the media organizations."

In the past, the major networks, newspapers and magazines were the primary outlets for opposition research, but the Internet has changed the game. Reporters like Marc Ambinder at Hotline on Call and Chris Cillizza at Washingtonpost.com, not to mention the campaign bloggers at the Politico, are often the first to break small pieces of opposition research, like a YouTube video or an embarrassing quote, that would not normally be enough to merit a story in a major newspaper or on a network news show.

By contrast, some of the major papers continue to treat oppo dumps with healthy skepticism. Adam Nagourney, the New York Times' top political reporter on the 2008 campaign, says his employer still maintains relatively strict rules about disclosing opposition research when it is used in a story. "When you get information from a rival campaign," he said, "you are supposed to say you get it from a rival campaign." In 2004, Nagourney caused a stir when he reported on a mass e-mail attacking Howard Dean from Stephanie Cutter, the spokeswoman for John Kerry's campaign, which she had sent to reporters on "background," meaning not for attribution. "If you want to send out something not for attribution, you have to negotiate it with me first," Nagourney said. But he sees no problem with a reporter tapping the vast resources of a campaign for unattributable information about rivals, especially historical details on "quotes and votes," an age-old practice for reporters.

By far the biggest prize in the oppo game, especially for Republicans, is a banner headline on the Drudge Report. Now based in Miami, Matt Drudge's Web site first became prominent a decade ago with two big scoops from GOP leaks -- the identity of Bob Dole's running mate in 1996 and the existence of a certain stained blue dress less than two years later. Drudge played a major role in the 2004 campaign by peddling opposition research, both true and false, about Democratic candidate John Kerry. This year, with no clear GOP front-runner, the major Republican campaigns have spent considerable energy trying to cultivate a relationship with Drudge. "The mainstream media prides itself on being objective, yet they often run like lemmings to whatever is up on Drudge," said a senior Republican campaign aide, who asked to remain anonymous.

In addition to the "Bomb Iran" video, Drudge was one of the first to post links to a 1989 video clip of Giuliani declaring "there must be public funding for abortions for poor women." In April, he posted a story suggesting that a blotch on McCain's head (caused from a bump) was in fact a new case of skin cancer, a false rumor apparently intended to fan concern over McCain's age. Drudge has also posted embargoed text of Romney's presidential announcement speech in February. On May 10, he posted the first excerpts of Romney's May 13 interview on "60 Minutes."

Some campaign aides have suggested that Drudge's personal relationships have played a role in what oppo leaks he posts on the site. "I think it's clear that Romney has gotten fairer treatment from Matt Drudge than any other candidate. There is a lot less negative Romney stuff," said the senior Republican campaign aide. "It stems back to what many people believe is a very good relationship between the Romney team and Matt Drudge."

In particular, Matt Rhoades, Romney's communications director, has a long history as the source for Drudge headlines, having previously served as the research director for the Republican National Committee during the 2006 campaign. In their book "The Way to Win," Time's Mark Halperin and the Politico's John Harris recount that Rhoades traveled to Florida for a friendly steakhouse dinner with Drudge when he took the research director job in 2005. Attempts by e-mail and telephone to ask Drudge about the allegations of favoritism were not successful.

According to Alexa, an Amazon ranking of Web traffic, the Drudge Report is the 86th most trafficked site in the United States and the seventh most popular site for news. Just by linking to a news story or blog item, Drudge can drive more than 100,000 unique visitors to a Web site. For small news organizations or independent bloggers, which sustain themselves on advertising revenue, a link on Drudge can mean money in the bank, upping the incentive for reporters to post opposition research.

Sometimes in the rush to make a splash, the truth can be lost along the way. Drudge's April headline "McCain Sings: 'Bomb Bomb Bomb, Bomb Bomb Iran'" was a quote taken from Harper's Georgetown Times news story. But as the accompanying video showed, McCain never uttered those exact words. As the Associated Press correctly reported, he said the following, before declining to directly answer a question about whether he would attack Iran: "That old, eh, that old Beach Boys song, 'Bomb Iran.'" Then he sang, "Bomb Bomb Bomb Bomb, anyway, ah ..." And he trailed off.

It didn't matter, of course. The oppo had done its job. The world believed what the Drudge headline declared. It was just another day in the 2008 campaign.