What the Republicans really meant to say

Will Tommy Thompson make more gaffes -- and will Rudy Giuliani keep tacking back to the left on abortion -- at the second GOP debate tonight? 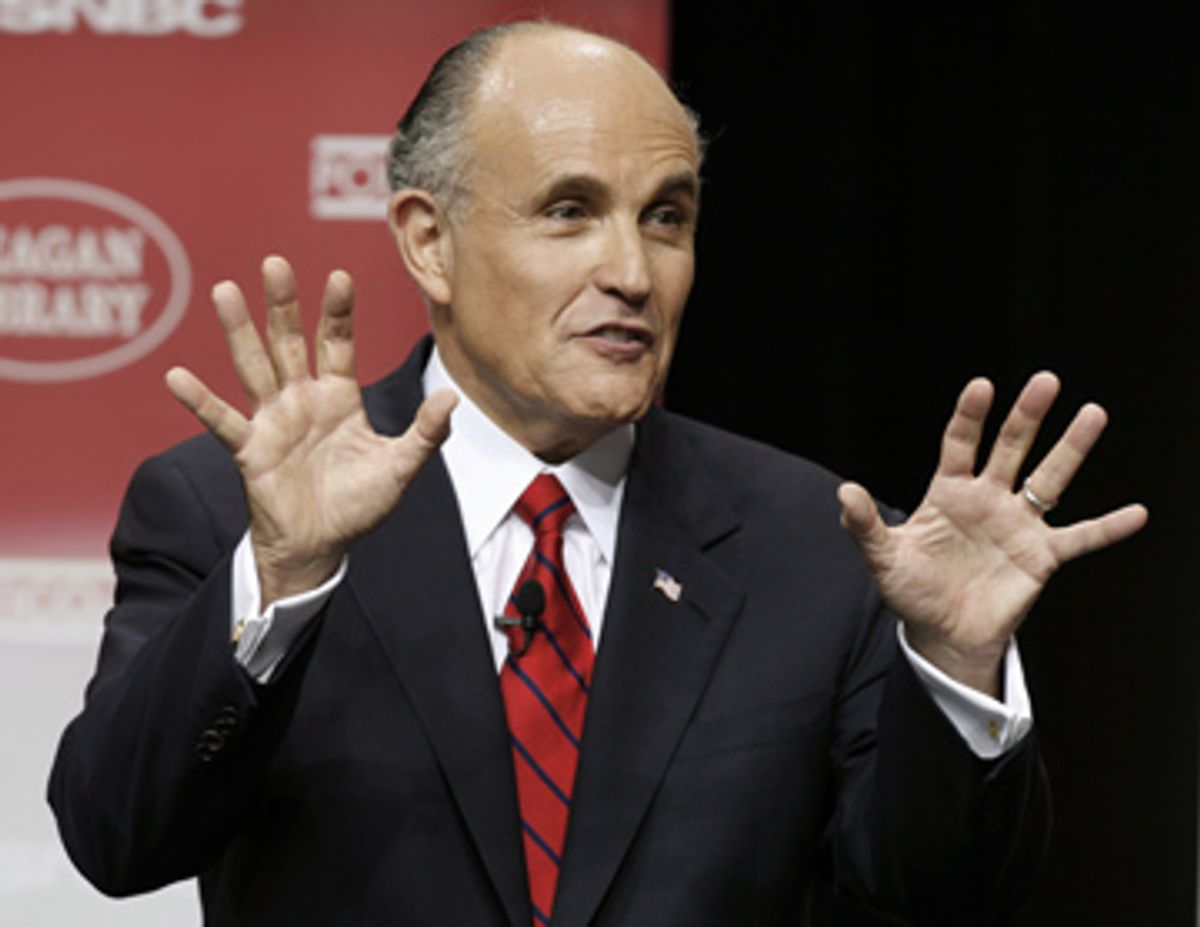 Tonight is do-over time for the Republicans. In South Carolina, Fox News hosts the second debate of the GOP presidential season before many of the self-inflicted wounds from the initial May 3 face-off at the Reagan Library in California have healed.

Former Wisconsin Gov. Tommy Thompson -- who is trailing even among his fellow Republican no-hope dreamers -- has carried candidate candor to a new level as he piled on apologies and excuses for an intolerant debate answer about job discrimination against gays. Not only had Thompson been suffering from bronchitis and the death of his hearing-aid battery mid-debate, but he also told reporters, "I could not wait until the debate got off so I could go to the bathroom."

More important, Rudy Giuliani has been working overtime at offering clarifications, though he is too much the tough guy to say he's sorry. As the Republican presidential candidate with the greatest potential to either self-destruct or break out of the pack, Giuliani badly blundered in the first debate when handed an easy-to-anticipate question on abortion. But Giuliani's comeback strategy has ended up as a bold challenge to Republican orthodoxy -- and it serves as reminder that his candidacy is the explosive wild card in 2008 politics."

Asked during the first debate about reversing Roe v. Wade, Giuliani -- a longtime supporter of abortion rights -- tepidly said, "It would be OK." Then, seconds later, Giuliani reversed field and added that he could also live with the Supreme Court upholding the 1973 decision. Giuliani, who tops the national Republican polls because of his reputation for decisive leadership, answered the hot-button abortion question with all the passion of a busy man choosing a tube of toothpaste at an airport convenience store.

It was a lose-lose moment for the former New York City mayor. For social conservatives, Giuliani's waffling on abortion stood in vivid contrast to the nine other Republican debaters, who denounced Roe v. Wade with the lockstep unanimity of a Soviet election. For other GOP voters, more concerned with terrorism and taxes than the termination of a pregnancy, the shiftiness of the answer made Giuliani look inauthentic and politically calculating.

Giuliani tried a few post-debate attempts at what-I-meant-to-say damage control, but he bristled when his appearance on Laura Ingraham's radio show on Tuesday revolved around abortion, telling the conservative host as he went off the air, "I would love to come back, but you're going to have to ask me about the war on terror and what we do about the economy, which is after all what most citizens ask me about."

It took more than a week after the Reagan Library debate for Giuliani to finally figure out how to make a virtue out of a necessity. In a speech at Houston Baptist University on Friday, Giuliani combined a restatement of his personal opposition to abortion with a plea for tolerance and understanding for women who choose to abort a pregnancy. "Even if you disagree," Giuliani said, "you have to respect the fact that their conscience is as strong as yours is about this and they're the ones that are most affected by it. So therefore I would grant women the right to make that choice."

But Giuliani did not stop there -- he also offered a vision of a big-tent Republican Party at odds with Karl Rove's pander-to-the-base theory of narrowcasting. Warning of looming electoral defeat, Giuliani said, "We cannot go into the next election the same way that we went into the last two. We can't go into the election giving away huge numbers of states where we have no chance to compete and then have it come down to one state."

While Giuliani had expressed similar sentiments before, his blunt talk in Houston may have signaled a strategic shift in the presidential campaign of an unorthodox candidate who had repeatedly run for New York City mayor not only as a Republican but also as the nominee of the -- gasp! -- Liberal Party. Much like the John McCain of the 2000 primaries, who talked fervently about remaking the Republican Party in the image of Teddy Roosevelt, Giuliani is arguing that writing off California and the Northeast is a political death wish.

Tough on terrorism and soft on social issues could indeed be a winning strategy for the post-Bush-era Republicans in a general election. But it is questionable whether a presidential candidate who harks back to the Good Old Days of the GOP can win the nomination. The Republicans these days have so many litmus-test issues that they should hand out chemistry sets at the debates. And Giuliani is on the wrong side of most of them -- remember that Rudy, as mayor, moved in with a gay couple when his second wife kicked him out of Gracie Mansion in the waning days of their marriage.

Abortion is the prime single-issue example, since opposition to Roe v. Wade has been enshrined in the Republican Party platform since the coming of Ronald Reagan. A multiple-choice question in a CBS News poll conducted in January found that only 21 percent of Republicans favor abortion without restrictions, while 58 percent gave answers that would be classified as antiabortion. Talking with reporters in the "spin room" after the Reagan Library debate, Giuliani pollster Ed Goeas casually estimated that fewer than one-quarter of Republican voters are motivated by their opposition to abortion in choosing a candidate.

National polls may prove to be far less of a bellwether than the sentiments of Republicans in the three early caucus and primary states -- Iowa, New Hampshire and South Carolina. In Iowa, in particular, conservative activists have been major players in the caucuses since 1988 when Pat Robertson (yes, that Pat Robertson) finished second with 25 percent support. South Carolina is another state where taking the liberal side on social issues has traditionally been an easy way for a candidate to ensure that he will be reading a concession speech to an empty ballroom on primary night.

But Giuliani, especially if he can get away with harking back to Sept. 11 in every answer, is a candidate seemingly impervious to the iron laws of Republican politics. The former mayor is selling one product -- himself as a leader -- and trimming on the issues is a guaranteed way to undermine this image. That is why, in political terms, Giuliani was right to embrace, however belatedly, his unorthodox-for-a-national-Republican position on abortion.

Republican strategist Rich Galen, who is not affiliated with any presidential candidate, said of Giuliani's restatement of his support for abortion rights, "That's what they should have done in the first place. They should never have gotten away from it. Everyone in the U.S. over the age of 19 has a position on abortion -- and they won't budge from it. Abortion is not the kind of issue that you can finesse."

But debates, especially those with a draconian time limit of 60-second answers, can offer continual opportunities for pratfalls for candidates uncomfortable with their own records and how they have positioned themselves on divisive issues. For any Republican presidential contender, the temptation will always be there to repackage himself (as Mitt Romney has done) as a born-again social conservative. That is why another two-faced Giuliani answer to tonight's inevitable abortion question could do more harm to his candidacy and his political character than any revelation about his personal life.