The former TV star recalls the trauma of being called gay by the conservative preacher. 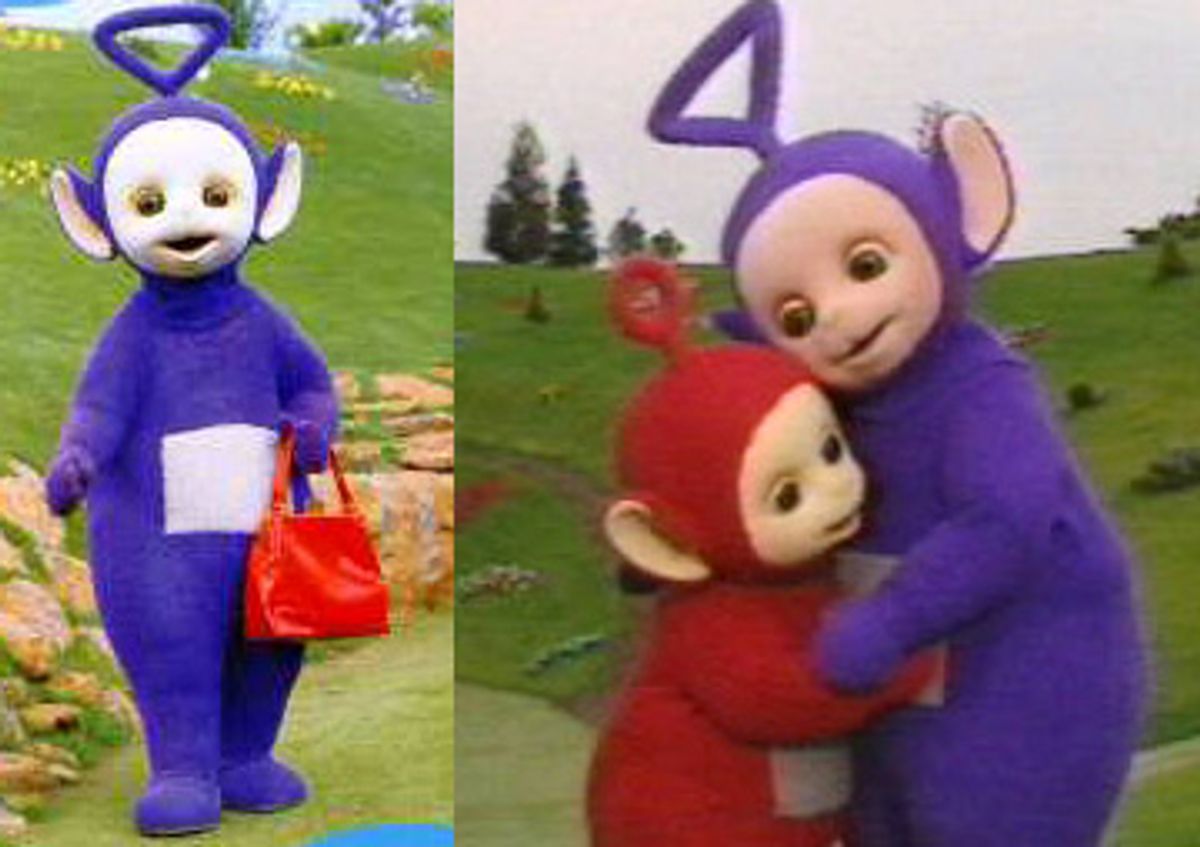 Eight years ago the Rev. Jerry Falwell warned parents that BBC children's television star Tinky Winky was a hidden symbol of homosexuality. Falwell died Tuesday at 73, and the world wanted to talk to Tinky Winky.

"They're calling again, again, again," he said by phone from his home in Islington, in London. A spokesman said the former "Teletubbies" costar got more than 100 calls from reporters in the hour following news of Falwell's death.

"Oh dear, it's easy to say the wrong thing here," he said. "Tinky Winky sad whenever someone dies, but ..." He left it hanging there.

In a 1999 article in his National Liberty Journal headlined "Tinky Winky Comes Out of the Closet," Falwell pointed out that Winky could be taken as representing gays.

"He is purple -- the gay pride color, and his antenna is shaped like a triangle -- the gay pride symbol," Falwell wrote. "The character, whose voice is that of a boy, has been found carrying a red purse in many episodes and has become a favorite character among gay groups worldwide."

In the resulting media firestorm, gay-rights activists called for Winky to come out while Christian groups demanded the BBC fire him so that he couldn't, in Falwell's words, "role-model the gay lifestyle."

"It was traumatizing, really," says Winky, who now owns a holistic healing center and makes occasional appearances on British TV. "I'm a very private Teletubby. I just wanted to get away, go over the hills and far away. But when you're 7 feet tall and purple with an antenna on your head and a TV screen in your belly, where are you going to go?"

Winky says he tried to contact Falwell after the article came out, but the evangelist wouldn't take his calls.

"I wanted to know why he didn't talk to me first," Winky says. "It's not like I'm hard to reach. Have the pinwheel call me. But really I just wanted to clap him on the head with Tinky Winky bag."

The star never has clarified his sexual orientation, insisting on his privacy and denying rumors over the years that he had affairs with two of his costars on the 1997-2001 show, the male Dipsy and the female Po.

"We love each other very much," he says. "Big hug. But it's not like that. It was a kids show, know what I mean? And this Falwell guy and his followers wanted to turn us into something else. We weren't modeling a gay lifestyle and we weren't trying to corrupt anyone's kids. We were just kids ourselves, really. Give us a little Tubby toast or custard and a film of some kids washing clothes or something, that's all we needed. We didn't give a shit about modeling a lifestyle."

"I'm just practicing my craft, working for the kids, and all at once the tabloids are everywhere on me," he says. "I couldn't even go out. Was it a gay club? Was I talking to a woman? It was bollocks."

Winky chuckles. "I must say, though," he says, "without getting into too many details, we had a girl in the group who ran around this kids show yelling, 'Cooter! Cooter!' And I'm the gay one? Do me a favor."

Through a spokeswoman, Po declined to comment for this article.

Winky says the Teletubbies stay in touch, and he remains friends with both Dipsy, who owns a nightclub in West London where Winky is often seen, and Po. Winky says he and Laa-Laa never really got along during the show's run, but, "We're fine now. We've come to appreciate each other."

"I'm not going to pretend I'm sadder than I am," he says. "There were late nights during the dark times when I wished to hear news like this. I'd be lying if I denied that. I don't feel that way anymore. I like to think I've grown over the years, gotten past all that pain.

"But at the end of the day, I'm not terribly sad, and I think a lot of people feel the same way. Jerry Falwell was a divisive person, a hateful person, and what I've tried to be all about, in the Teletubbies days and since then, has been love. I've got to keep it that way. I don't want anybody feeling good about it when it's my time for Tubby bye-bye."