Lorelai, Rory and Stars Hollow bid a final farewell wearing a homemade sash and subtext on their sleeve. 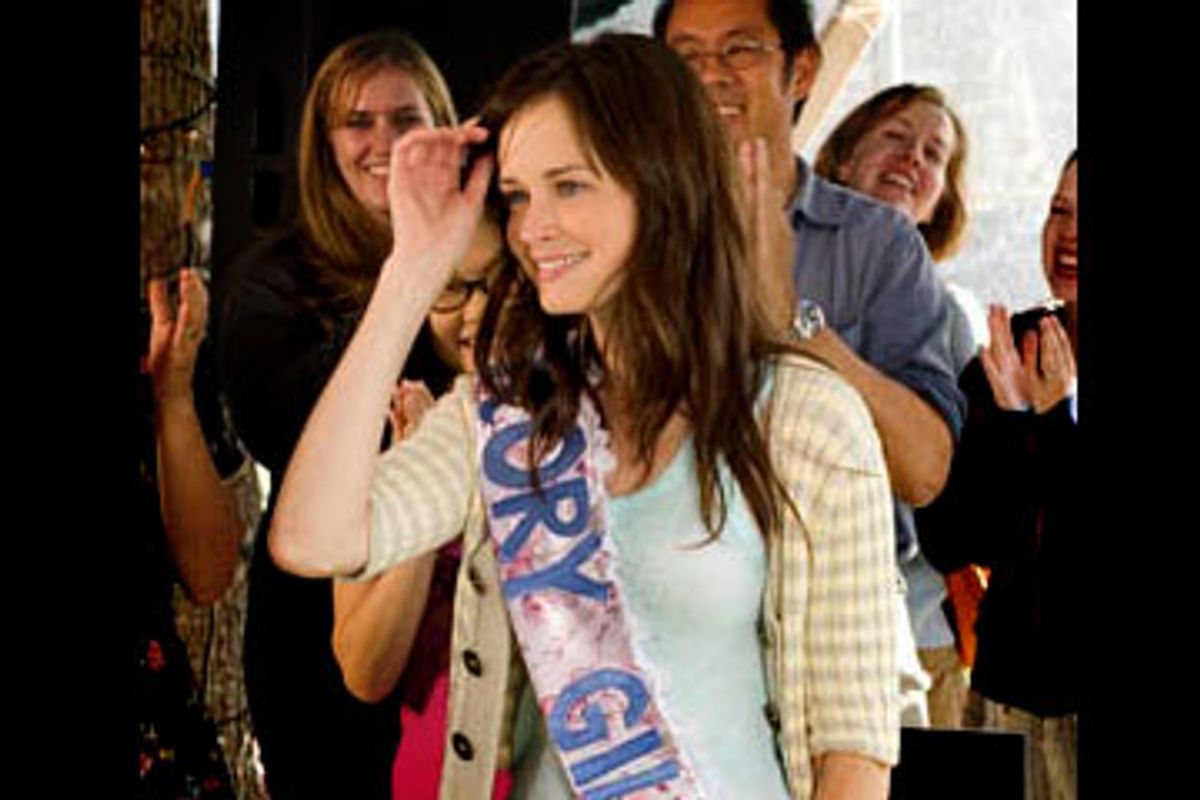 I used to have imaginary arguments with people about "Gilmore Girls." Isn't it kind of cutesy? they'd ask, these fantasy combatants of mine. Why do all the characters babble incessantly, cramming hundreds of unfeasibly long words into every frame? And doesn't that wispy Sam Phillips music woven through the show like cotton candy get on your nerves?

In response, I'd mount an impassioned defense of the series' many charms, among them its, well, charm; its witty, brainiac female characters and their emotionally complex relationships; hypercaffeinated repartee worthy of Hepburn and Tracy; and a pop-culture literacy that revealed itself in tiny, often hilarious (if you got the joke) ways. Not to mention the invention of a small-town idyll -- Stars Hollow -- that made even those of us who have no desire to live in a perfect little small town sigh with pleasure. Star's Hollow was a wishful-thinking kind of place, classless and integrated, where everyone worked hard at their little mom and pop businesses but no one really struggled. Where Luke's diner reigned rather than Starbucks, everybody showed up for the town meetings, and an eccentric like Kirk could find endless employment opportunities. In Stars Hollow, "Gilmore Girls" creator Amy Sherman-Palladino once told me, Al Gore was president.

But how long could that fantasy hold out? Somewhere around season 5, the show lost momentum. The long-simmering flirtation between single mom Lorelai and her cantankerous best friend, Luke, had always served as the show's binding tension, and the consummation of their endlessly deferred ardor signaled disaster, harking back to classic TV series (most famously "Cheers" and "Frasier") sunk by the release of sexual tension between key characters. On top of that, the other key love affair in "Gilmore Girls" -- between Lorelai and her daughter, Rory -- hit a speed bump when Rory toddled off to Yale, forcing the duo to perform their trademark banter via cellphone. Finally, the whole project was shot to hell when Sherman-Palladino and her husband/co-writer, Daniel Palladino, left the show.

This last season has been eerie, like watching familiar bodies occupied by foreign spirits. All of the relationships felt irreparably strained. The scripts were full of filler, as if writers who didn't understand how the show worked tried to spin out clever conversations based on random objects with no resonance. ("Do I really want to be known as the back-support thingie girl?" Rory quipped pointlessly in the final episode.)

The hip references petered out as Rory -- smug yet earnest -- focused on her career goals (journalism) and her boyfriend (wealthy newspaper scion Logan). Her irrepressibly vivacious best friend, Lane, found herself the mother of twins, which meant forsaking her dream of stardom as a drummer in an indie-rock band. Lorelai vaulted over the shark and then ate it when she performed a karaoke version of Whitney Houston's "I Will Always Love You" while making meaningful eye contact with Luke. And even Kirk, the visual comedy genius of many episodes past, was more or less put out to pasture, as if the writers could no longer imagine a world kooky enough to contain him.

So the final episode, which aired Tuesday night on the CW, came as something of a relief. Ever self-conscious, it wore its subtext on its sleeve by making it clear, in any number of ways, that the show was over. The chatter, which still moved at a million words per minute, was largely devoid of content, entangling us in monologues about just how over it really was. Rory, who had taken a job covering the Barack Obama campaign for an online magazine, burbled to her mom with nary a pause: "In three days I'll be leaving for who knows how long. It could be two months, it could be two years if Barack does well, and what does that mean? b

But as ever, Stars Hollow beckoned, rescuing the series finale from gauche banality. Sure, the giant surprise farewell party the whole town threw Rory and Lorelai wasn't exactly believable. (Luke stayed up all night sewing together all the neighbors' tarps to make a giant rain-proof tent, eh?) But that's not the point: When Kirk presented Rory with a sash made of his mother's nightgown, it was hard to suppress a wistful sigh. And the very last image, through the diner window, of mother and daughter sharing a farewell coffee and bittersweet banter -- Luke bustling purposefully behind the counter -- was framed by softly glowing lights, like a postcard from a better, sweeter world.