What you missed while watching "Dancing With the Stars"

Salon watches the second Republican debate so you don't have to. 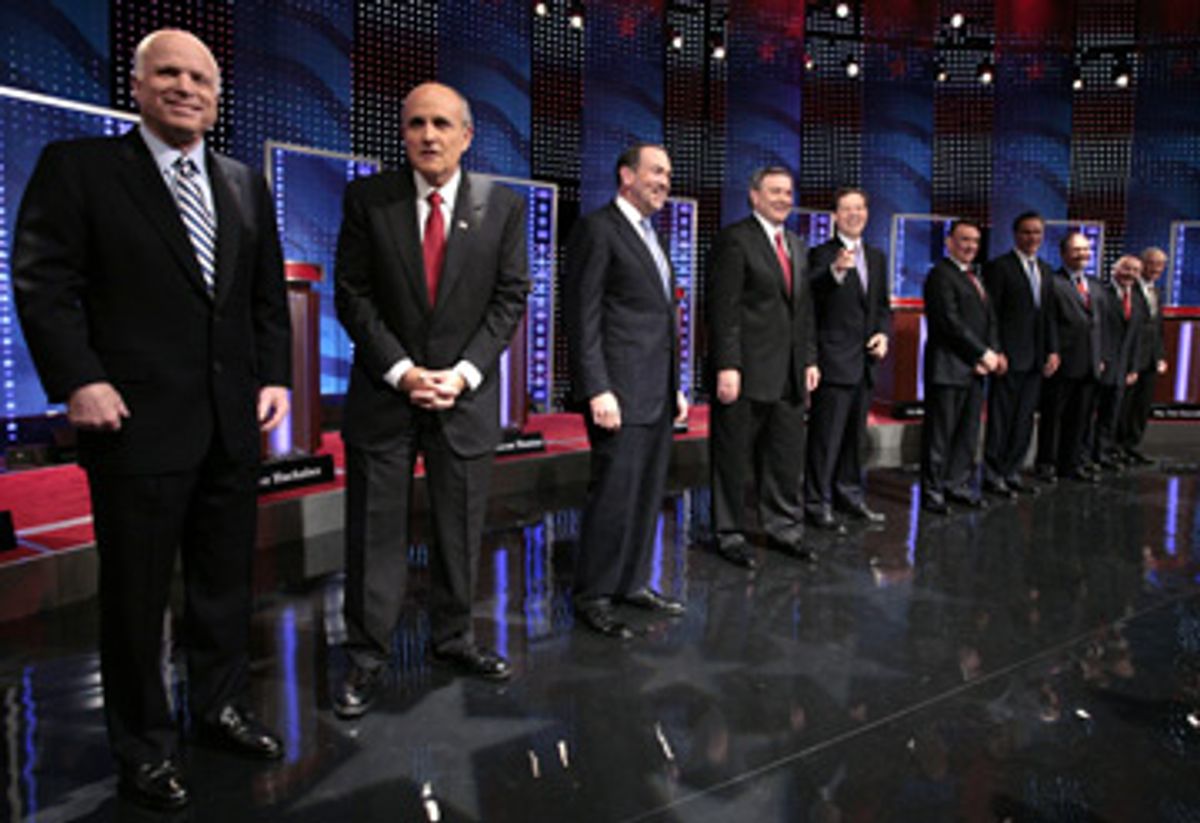 0 minutes. Fox News opens its debate by introducing each of the 10 GOP presidential candidates with an info-graphic. But there is only so much space on the screen, so choices must be made. For instance, next to former New York Mayor Rudy Giuliani, the graphic mentions his wife and kids, but does not mention the fact that his kids don't like his wife, or him. Next to John McCain it says "Episcopalian." Next to Texas Rep. Ron Paul it says "Protestant." Next to Former Massachusetts Gov. Mitt Romney it says "Mormon." That's right. Mormon.

1 minute. Host Brit Hume says all the candidates have expressed condolences over the passing of Jerry Falwell. So now no one has to talk about him.

10 minutes. Kansas Sen. Sam Brownback is asked a tough question. "You said that you wanted to find a way for Republicans and Democrats to work together," asks Fox's Chris Wallace. "Is that any way to fight and win a war, to look for consensus among the politicians in Washington?" Brownback does the only reasonable thing -- attack Democrats. "I condemn the statements of Harry Reid, the majority leader of the Senate, saying we've already lost," says Brownback, assuring GOP voters that he is, in fact, not very bipartisan after all.

11 minutes. In answering a national security question, Giuliani says, "I think Sen. McCain is correct." Perhaps all the candidates are going to be nice to one another. They are all Republicans, after all. Can't they get along?

16 minutes. The answer is no. California Rep. Duncan Hunter attacks the other candidates, questioning their patriotism. "I served in uniform in Vietnam. Didn't do anything special, but I served. My son has done two tours in Iraq. I can look at the American people and say, we are in this together. And I think the other guys ought to lay out their credentials to be commander in chief." Snap!

21 minutes. McCain makes the first joke of the night, a sure crowd pleaser that he tells at every campaign stop. Republicans lost their way in Washington, he says. "Government changed us. We let spending go out of control. We spent money like a drunken sailor. Although I never knew a sailor drunk or sober with the imagination of my colleagues." The crowd likes it, laughs.

22 minutes. Former Arkansas Gov. Mike Huckabee will not let McCain be the funniest guy in the room. "We've had a Congress that's spent money like John Edwards at a beauty shop," he says. The crowd loves it. The laughter is louder. Huckabee wins the joke contest.

32 minutes. Colorado Rep. Tom Tancredo is talking about the budget deficit. His face is pasty. He must be wearing pancake makeup. Either that, or he has been bleeding heavily.

33 minutes. Hume says we are going to take a break for commercials. Commercials? MSNBC didn't do commercials for the first two debates. But this is Fox News. Rupert Murdoch wants to own the Wall Street Journal. Capitalism and all that. Democracy is brought to you by Health Mart Pharmacies. Smart Balance Buttery Spread. Days Inn. Plavix.

36 minutes. OK, we're back. First question goes to former Virginia Gov. Jim Gilmore. He goes on the attack, says Huckabee raised taxes, Romney supports government healthcare and Giuliani wants to abort babies. But he fumbles the delivery. "We've got one candidate here on the stage who in this campaign has said that he is against federal funding of abortions," Gilmore says. Oops. "That he is in favor of federal financing of abortions." Quick recovery.

38 minutes. Wallace turns the questions to Giuliani, unleashes the rhetorical equivalent of a Gatling-gun blast. "You're pro-choice, you're pro-gay rights, you're pro-gun control. You supported Mario Cuomo for governor over a Republican. Are those the stands of a conservative?" Giuliani takes the question in stride and does the only logical thing. He attacks Hillary Clinton. "We're looking at a race here in which the leading Democratic candidate for president of the United States has said that the unfettered free market is the most disastrous thing in modern America." Can that be true? It doesn't really matter. This is a Republican crowd. If Giuliani claimed Clinton was born on the planet Zorg, no one would bat an eye.

40 minutes. McCain has broad shoulders, robotic movements. He does not appear as caffeinated as during the first debate, but he has trouble saying the word "transcendental."

43 minutes. Romney tells a joke that is not funny. "Have you ever bought a suit and look at it and you can't tell if it is blue or black?" he says. "That's how blue Massachusetts is." The message: I am rich. Unlike you, I own lots of suits.

46 minutes. Former Wisconsin Gov. Tommy Thompson has had a rough few weeks. He needed a potty break at the last debate. His hearing aid has been failing. When he talks, he sounds like a Muppet. And his hair flops across his forehead like a small dead animal. But when he gets a question about embryonic stem cells, he hits it out of the park. He easily uses words like "pluripotency," "cord blood" and "amniotic fluid."

53 minutes. Tancredo gets a question about whether the other candidates are soft on immigration. This is his issue. He is ready to answer. But just as he does, something goes wrong with one of the Fox cameras. The screen gets a red haze over it. With his pasty face, the red light makes Tancredo look for a moment like Satan. Then the camera cuts away.

57 minutes. Romney pulls out the big guns and aims them at McCain. He mentions two bills McCain has sponsored with Democrats. "My fear is that McCain-Kennedy would do to immigration what McCain-Feingold has done to campaign finance and money in politics, and that's bad," says Romney. Snap! It's the political equivalent of a yo-momma joke.

58 minutes. McCain is prepared with a comeback for the flip-flopper from Massachusetts. "I have kept a consistent position on right to life. And I haven't changed my position in even-numbered years or haven't changed because of the different offices that I may be running for," McCain says. Wow! This is the just the beginning for these two kids. It's a long campaign.

64 minutes. Giuliani suddenly springs to life, staking out his turf as censor in chief. He interrupts Paul, who has been explaining that al-Qaida attacked New York and Washington in part because U.S. military forces were based in the Middle East. "That's really an extraordinary statement," Giuliani interrupts. "That's an extraordinary statement, as someone who lived through the attack of September 11, that we invited the attack because we were attacking Iraq." The crowd loves it, starts applauding. "I would ask the congressman to withdraw that comment and tell us that he didn't really mean that." Paul does no such thing.

69 minutes. Pasty-faced, once-devil-lit Tancredo is asked a question about global warming, and says there are scientists stacked up on all sides of the issue. Then he changes the subject. He wants to talk about al-Qaida again. They are trying to kill us, he says, "because it is a dictate of their religion, at least a part of it." There goes the Muslim vote for Tancredo.

70 minutes. Another commercial break. AARP. Franklin Templeton Investments. Doubletree Hotels. E-Loan. Then Fox's Sean Hannity appears on-screen, doing his best interpretation of Ryan Seacrest. Viewers can text the number on the screen, he says, to vote for which candidate they think won the debate.

74 minutes. We're back. "The questions in this round will be premised on a fiction," says Hume. No news there. Hume wants to do a role-playing game. Three shopping centers near American cities have been hit by suicide bombers. Hundreds are dead, thousands injured. A fourth attacker is apprehended and may have information about more attacks to come. The question goes to McCain. "How aggressively would you interrogate those being held at Guantánamo Bay for information about where the next attack might be?"

75 minutes. McCain answers emotionally, convincingly. "We do not torture people. When I was in Vietnam, one of the things that sustained us as we underwent torture ourselves is the knowledge that if we had our positions reversed and we were the captors, we would not impose that kind of treatment on them."

76 minutes. Giuliani tries to appear tougher than McCain. "I would tell the people who had to do the interrogation to use every method they could think of. Shouldn't be torture, but every method they can think of." It's unclear what he means, but it sounds a lot like torture. The crowd likes it. Applause.

79 minutes. Now Brownback sounds as if he is endorsing torture. "I'm going to do everything within my power to protect U.S. lives, period," he says. No applause for Brownback. The crowd is tired of cheering harsh interrogation.

80 minutes. It's Hunter's turn to sound like he's endorsing torture. "I would say to SecDef, in terms of getting information that would save American lives even if it involves very high-pressure techniques, one sentence: Get the information," he says. "SecDef" is tough talk for the secretary of defense.

81 minutes. The microphone returns to McCain, the only man on the stage who actually knows anything firsthand about torture. "Virtually every senior officer, retired or active duty, starting with Colin Powell, General [John] Vessey and everyone else, agreed with my position that we should not torture people," he says. Now he gets applause.

86 minutes. Pasty-faced Tancredo tries to outdo everyone else with his full-throttle endorsement of torture. "I'm looking for Jack Bauer at that time, let me tell you," he says. "And there is nothing -- if you are talking about -- I mean, we are the last, best hope of Western civilization." This sounds weird. Tancredo is saying torture will preserve the values of Western civilization. He seems to mean it. So be it. No blood has pooled at his feet. It must have been the makeup.

90 minutes. Hume calls the debate to a close and tells everyone to stay tuned for "Hannity & Colmes."