Irish boy meets Czech girl on the streets of Dublin, and together, they make beautiful music -- and one sweet film. 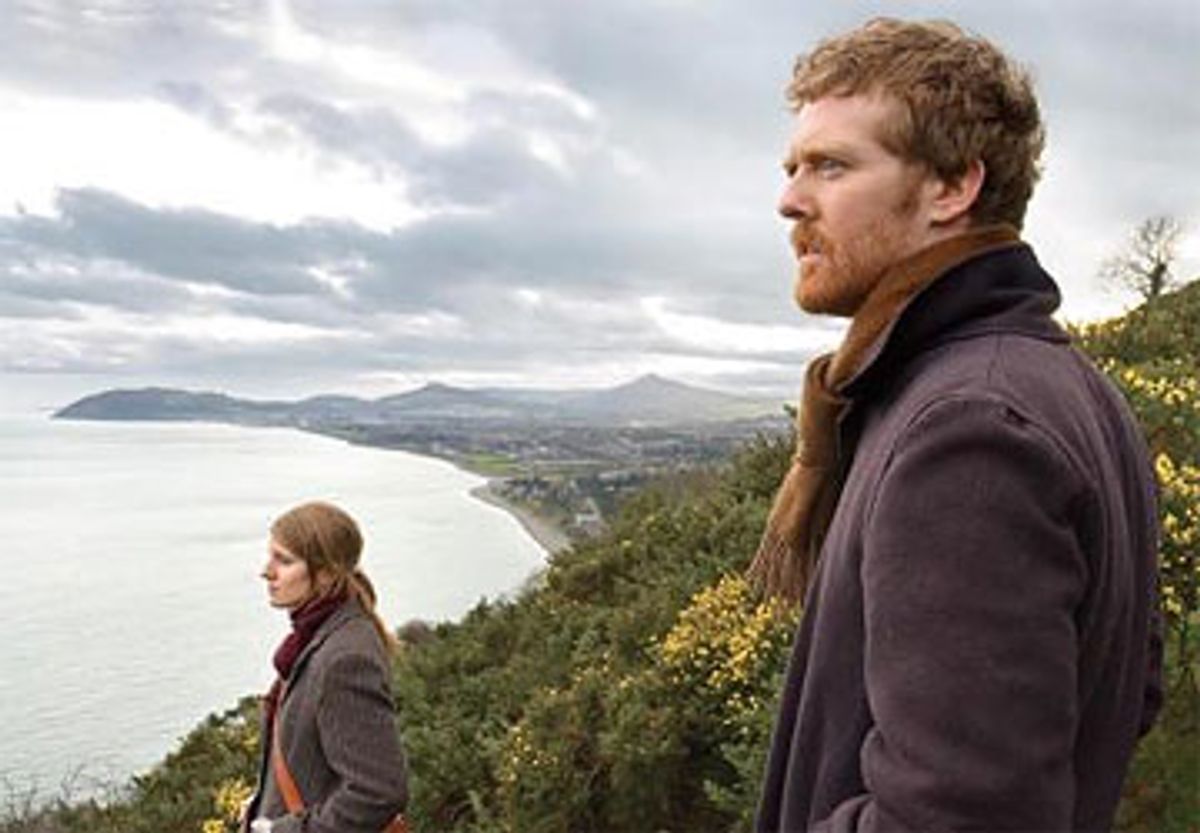 Writing about a movie like "Once" almost feels like a betrayal: It's such a modest, unassuming picture that you fear you might crush it by putting too many words around it. This is a love story between an Irish guy and a Czech girl -- we never learn their names, which makes their story both more universal and more intimate -- who meet on the streets of Dublin. He's a singer-songwriter and busker, with an absentee girlfriend; he also works in his dad's vacuum-cleaner-repair shop. (The guy is played by a real singer-songwriter, Glen Hansard, of the Irish band the Frames.) The girl is a sort of mystery woman, but not the femme-fatale type: The details of her life emerge gradually, but we do learn, early on, that this young woman -- played by 19-year-old Czech musician and songwriter Markéta Irglová, in her first acting role -- is a pianist with no piano. As the two wander the city together, she leads him to a music store where the friendly proprietor regularly lets her practice on the merchandise. The busker listens to her play, and later, he gives her some of the music he's working on: Together, they build a song.

The guy and the girl exchange little more than a kiss on the cheek during the course of "Once," but the romance -- and the erotic charge -- between them runs deep. "Once" was written and directed by the Irish filmmaker John Carney, who has called the picture a musical, and it is: But the music is so organic, so essential to the story, that even members of the "I Hate Musicals" brigade would be foolish to give the movie a pass. ("Once" has about as much in common with the community-theater shriekfest "Rent" as Coltrane has with Kenny G.) The songs in "Once" are delicate but vibrant, with none of that damned singer-songwriter preciousness.

Carney and his cinematographer Tim Fleming use both music and visuals to suggest the at first fragile but rapidly intensifying connection between the characters: In an early scene, after the girl has played for the guy on one of the store pianos, he takes out his own guitar and gives her a piece of his music. It's a ballad, and they play it together, at first haltingly -- she's learning it on the fly, after all -- then confidently, as they slip into each other's rhythms. (Hansard and Irglová collaborated on the 2006 album "The Swell Season"; several of the songs appear in the film.) The camera lingers on the couple's faces as the song's intensity grows. These people are both performers, but this is the first time they're performing for each other, and we can see and hear both their shyness and their confidence, a sight-and-sound metaphor for the thrill and terror of early courtship.

The idea that a movie should be in sync with its characters (and its actors) may sound kindergarten-rudimentary, but I'm always surprised how many movies seem weirdly disconnected from the people who populate them: Sometimes a film can be very well structured and nicely filmed, and yet still feel like a ghost-town housing development where no one wants to live. "Once" is constructed simply and beautifully, with the feel of something made by a human being, not by a film-school grad obsessed with camera angles. Carney allows his actors -- their faces and their voices -- to guide the picture's gently shifting moods. Hansard (who played Outspan in Alan Parker's "The Commitments") is a sandy redhead with mischief-maker's eyes; his charm is the rumpled, easygoing kind. And Irglová gives a wonderful, delicate performance, bringing to her character just the right balance of vulnerability and determination. Her character is an immigrant who makes her way doing whatever jobs she can find -- she's delighted when she gets a regular cleaning job. She lives with her mother (who speaks no English, and who's played with understated good humor by Danuse Ktrestova) and her 2-year-old daughter. She's younger than the busker, but she has weightier responsibilities. "Once" reminds us -- particularly those of us over 40 -- how complicated young people's lives can be: When most of your life is still ahead of you, the fear of making the wrong choices can be a burden, even more so when you have a child.

Although there's plenty of music, and plenty of joy, in "Once," it's ultimately a quiet, wistful picture: In its tone and mood, in the way it shows us young lovers wandering through a city and making it part of their story, it reminds me very much of Richard Linklater's quiet masterpiece "Before Sunrise." "Once" has a rare and buoyant generosity of spirit: The guy's elderly dad (played, wonderfully, by Bill Hodnett) doesn't look like much of a pop-music fan, but when his son plays him a tape of his music, he beams with pride, assuring his son how great it sounds. The guy and the girl want to record some songs for a demo, but they don't have a band: They approach a skiffle band, playing on the street, to ask them if they're interested. "We only do Lizzy, really," says one of the band members, puzzled but also clearly flattered. When the guy and the girl bring the whole band to the guy's house for a rehearsal, Dad shows up with a tea tray when it's time for them to take a break. Later, the sound engineer at the studio they've booked (he's played by Geoff Minogue) at first grumbles about having to work the weekend while these wankers make a record. But once he hears them play, he becomes part of their story instead of shutting himself out of it. Later, they thank him. "I just pressed the buttons," he says.

Telling the story of two people falling in love should be the simplest kind of story to tell, but it's also, perhaps, the easiest to botch. Everything about "Once" feels unforced and natural: The way the girl first finds the guy playing to no one, in a city square filled with town stores. Later, they play music together; they hang out together. He borrows his dad's beloved motorbike and takes her for a ride. They stop for a walk by a lake, and he quizzes her about her personal life, just as she's already angled for clues about his girlfriend. In one magnificent little scene, she settles into her room at night, her daughter sleeping in the crib nearby, looking forward to listening to some unfinished songs the guy has given her. He's lent her a Discman for the purpose (this is a movie where iPods, and the money they cost, don't feature), but the batteries have run down. She empties her daughter's piggy bank, promising to pay her back, and puts a coat on over her PJs, trekking out into the night to go down to the corner store. After getting her equipment back in working order, she walks back to the flat with music in her ears, making new lyrics for the busker's melody. What we're seeing, and hearing, is an act of creation, and of love, a sweet, miniature echo of the spirit of the movie around it.