Battling ennui from the worst season yet, Tyra Banks whips out some extra-large fake eyelashes and crowns a winner! 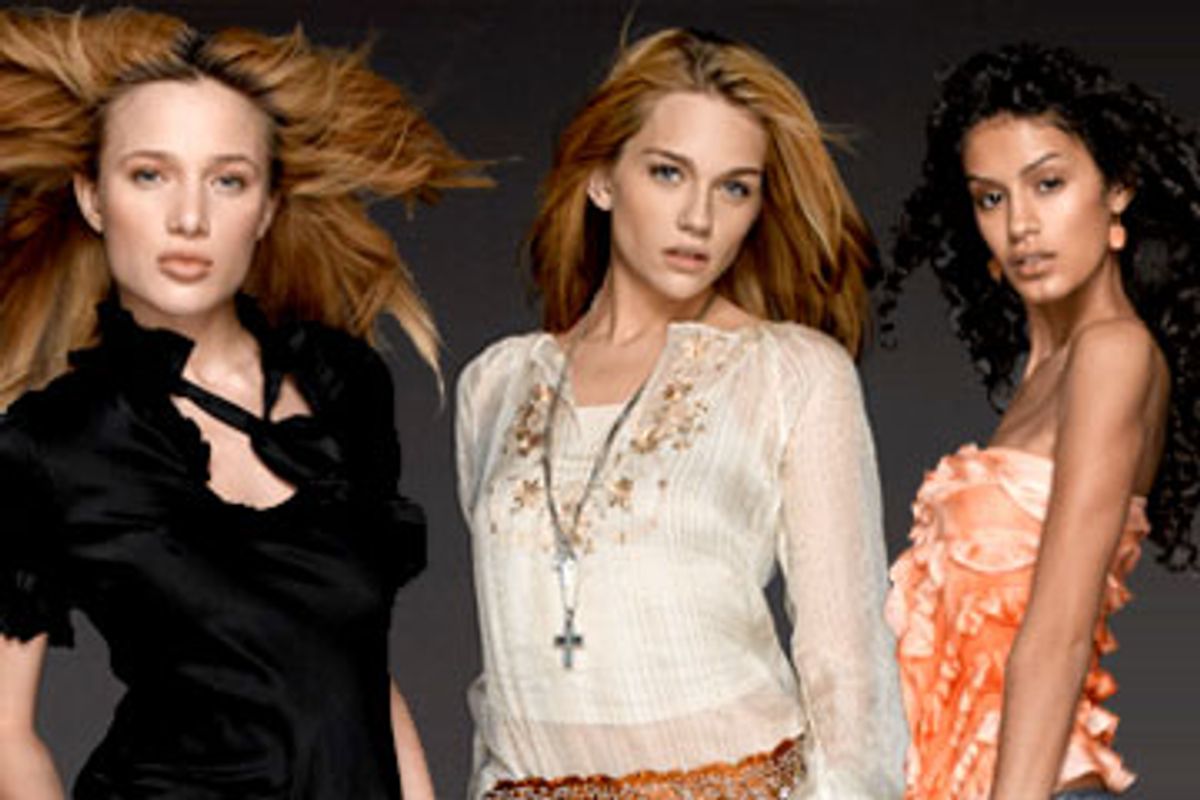 Sometimes you just have to model through it. That's the advice Tyra Banks once gave the girls about a particularly tough photo shoot, but it applies to every one of life's little challenges, whether it be conflict in the workplace, head lice or a particularly crappy season finale of "America's Next Top Model."

During the eighth cycle of the show, which ended on Wednesday night, Tyra and her staff seemed to be modeling through it most of the time. The judging discussions weren't heated or contentious, the photo shoots lacked flair, and the aspiring models were missing brains but they were never humiliated (a "Top Model" tradition) or called to task by Mama Tyra for their bad behavior. Even when Jael harassed 50 Cent at a "glamorous Hollywood party" until he threw her into the pool, and then mumbled her typical consonant-free, garbled excuse, the judges could barely work up the indignation to scold her. And that's not to mention Brittany, who threw a big, ugly temper tantrum and blamed her taxi driver when she was disqualified from the go-see competition for being late. Where was finger-pointing Tyra, who so memorably berated Tiffany for having the audacity not to weep big salty tears when she was eliminated during cycle four? Who knew we'd miss that woman? Tyra's patience has grown with the length of her enormous fake eyelashes, and the show is much worse for it.

Wednesday night's finale really could've used a sadistic photo shoot or an egotistical outburst to liven things up. The three finalists seemed to be picked for entertainment value alone, since the judges and staff lost their religion weeks ago: There was amusing Russian immigrant Natasha, who often appeared confused and awkward but made overconfident announcements that she was "the best competition" and if the other girls didn't like her -- you guessed it -- they were just jealous. (It had nothing to do with the fact that she appeared to have phone sex with her husband in the same room with them, just for example.) There was Renee, who took good photos but was also roundly hated by the others, so much so that during the regular "Let's talk about our feelings" session with the girls, Tyra encouraged everyone to tell "Nene" what they couldn't stand about her -- you know, out of love. And there was Jaslene, a rabidly enthusiastic Tyra worshiper who sometimes looked fantastic in photos and other times looked like a victim of a bad Glamour Shots session at the mall.

The less-than-festive festivities began with the traditional season-ending Cover Girl commercial. Enter CariDee, last cycle's winner, to coach the girls through their shoots. (Why are former winners so strange and creepy? It's as if they've been run through the professional-image machine until every ounce of soul is wrung from their limbs.)

The girls are asked to ad-lib a commercial. Renee begins hers by saying, "I had a baby nine months ago and I thought that my life was over!" Oh, yeah. That's the perfect Cover Girl opener, right up there with "Last week my boyfriend dumped me for my best friend, and I thought I would never get out of bed!" and "I have this itchy sore on my inner thigh that really concerns me, and my lab test results aren't due back until Friday!"

Jay Manuel interrupts Renee immediately. "It's like, you want to talk about things in a positive way?" he instructs in his helpful, questioning tone. So Renee whips out her best CariDee impression.

It was? Really? Afterward, Renee is feeling appropriately overconfident: "I think it's just going to be up to the judges," she says, sounding uncharacteristically diplomatic. "But I would hope that they don't let Natasha do the final runway, because she walks like a pigeon-toed duck with a piece of poop hanging out of her ass." Ah, there's the Renee we all know and hate.

Later, though, the judges agree that that "little old Renee" looks a little too old in pictures, so they cut her. Renee appears completely shocked and angry that the judges would choose a pigeon-toed duck with a piece of poop hanging out of her ass over her. Her final comments are less than gracious: "Apparently I look old?" she tells the camera. "OK, that's fine. I would rather have wisdom in my eyes and knowledge in my head than just be blank and stupid and not have anything there."

She makes a good point, but no one cares because it's time for the Big Fashion Show. Clearly being prompted to express strong emotions by some stooge behind the camera, Jaslene says, "I'm definitely surprised that Natasha's here and Renee's not." That's not dramatic enough for them, so she adds with a smile, "If Natasha wins this competition, I'm-a pull off all her hair!" OK, we've picked our winner.

"I feel like I'm doing this for myself, but I also do it for my baby," Natasha says. "If I win I'm gonna be happy, and of course my babies don't want unhappy woman to be raising them."

Yes, and we don't want unhappy woman to be hosting this show. Why does Tyra seem so blah? Is she just tired from working on her talk show, or from applying those foot-long fake eyelashes?

The final fashion show has an "evolution" theme, which is a little bit better than last season's abominable horror-themed costume drama, but it means that Natasha and Jaslene have to dress like Betty and Wilma from "The Flintstones" and act like backup dancers in Michael Jackson's "Thriller" video. They look equally ridiculous, crouching and looking around dramatically, as if they're being stalked by saber-toothed tigers.

When they can finally stand upright, though, they both look reasonably good walking down the runway. No stumbles, no mistakes, just professional model behavior. Natasha's skirt falls off, but instead of reacting, she just steps out of it and moves on.

"I did better than anybody else on the runway," Natasha proclaims afterward, giving us another taste of her humility.

"I think I bring fierceness on the runway," said Jaslene, who seems to be reading off Tyra's cue cards by accident.

At the final judging, Jaslene, Natasha and Tyra are all dressed like extras from Cleopatra's palace in "Rome." Miss Jay appears to have stolen the ruffles from several circus dogs, and now he's wearing them all around his neck in a great big pile. (Each ruffle represents a dismissed model.)

"When you came out as the animalistic early-woman stuff, you were beautiful," says Tyra to Natasha, demonstrating that top models really don't need to string a coherent sentence together to be rich and famous. Nigel calls Jaslene Bond-esque. Twiggy blinks sweetly. Can somebody wheel the coffee cart in here? Attempting to stir up a little good old-fashioned ethnic clash, Tyra pronounces this "the battle of the accents."

We look back at Natasha and Jaslene's photos, but for some reason stop short of the shots from the last few episodes, which included what had to be the lamest photo shoot in "ANTM" history, in which the girls huddled against the wind and rain with some sorry-looking aboriginals in a scrubby clearing in Australia that looked about as exotic and visually appealing as a state campground in West Virginia.

Finally, the judges struggle with their decision: Natasha is hotter, but she talks like she's from Mars. Jaslene is really sweet, plus she might kill herself if she doesn't win.

In the end, they do the merciful thing and pick Jaslene. Natasha, of course, acts like she'd really prefer it that way: "Now I'm just so happy to go back to my home and see my family."

"Every little girl has a dream to be something," Jaslene says, already rehearsing her first Cover Girl TV spot. "To be here, I've overcame so much. I didn't make it the first time, but now look at me, I'm America's Next Top Model! I'm a Cover Girl! And I think that shows, so all young woman, if you have a drive, keep going!" OK, I'm sure they can fix that in post. That's a wrap! Way to model through it, Jaslene.