With a couple of keystrokes, you too can read the hidden history of the Coalition Provisional Authority, America's late, unlamented occupation government in Iraq. 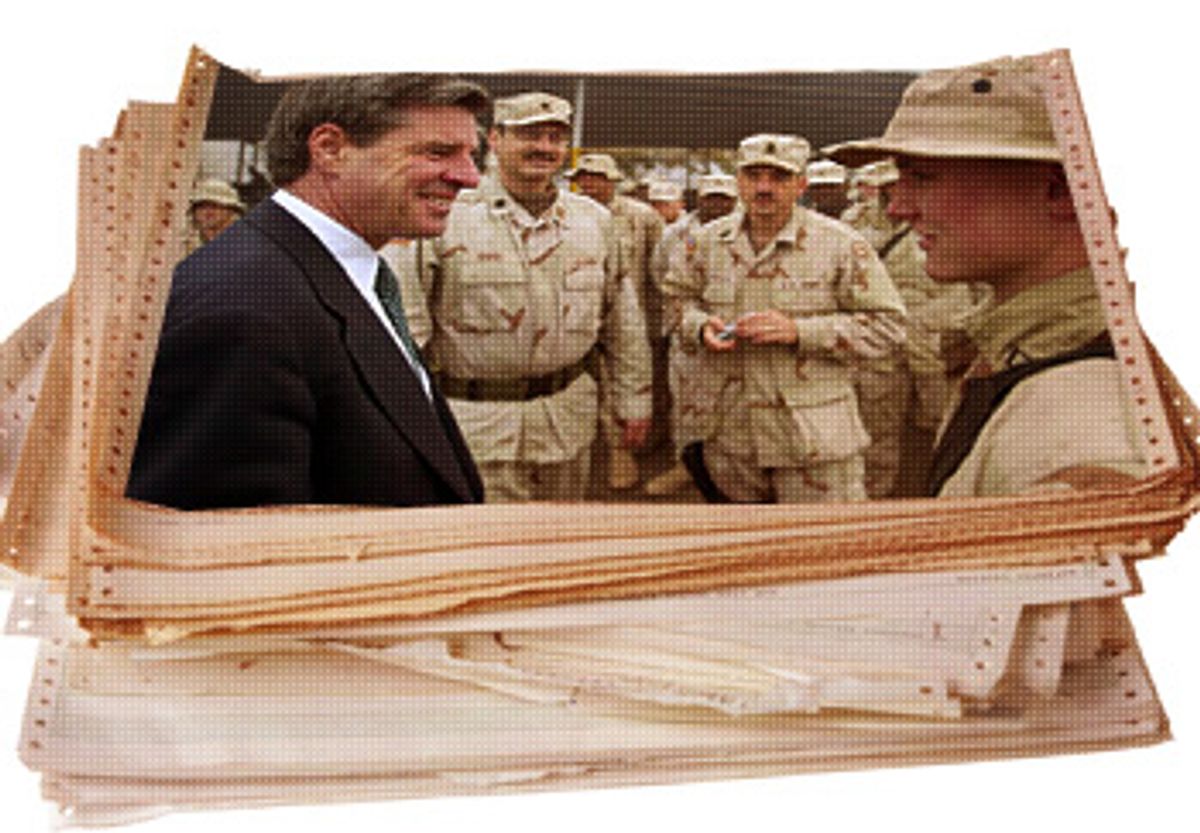 I'm a political scientist, and I've spent many hours rooting through documents to study the bureaucracies that once, not so long ago, ran various British colonial outposts in the Middle East. Back in the days when occupation governments dealt in paper, there was always a chance that you'd find a surprise in these cobwebbed mountains of folders, ledgers and official reports. There were sometimes notes scribbled in pencil in the margins of books, and it was not unheard of to open a dusty old volume and have a personal letter fall out. Through such fortunate mistakes researchers could piece together the unofficial, off-the-record history of empire.

When I started studying the massive archive of the Coalition Provisional Authority, the American occupation government that ruled Iraq from April 21, 2003, to June 28, 2004, I expected my experience to be different. I didn't think any letters would fall in my lap, because the archive is paperless. The first archive of occupation created during the IT era, the CPA's virtual history can be found online at www.cpa-iraq.org, on thousands of pages that each begin "Long live the new Iraq!"

But I forgot to factor in the ubiquity of human error, and of Microsoft Word. It turns out the IT era really is different, after all. It took my 8-year-old son just a few seconds to shake loose some hidden history from within the official transcript of the CPA.

My son made his discovery while impatiently waiting to play a computer game on my laptop. As part of a research project, I had downloaded 45 documents from a section of the CPA Web site known as Consolidated Weekly Reports. All but three of the documents were Microsoft Word. I had one of the Word documents up on my screen when my son starting toying with the computer mouse. Somehow, inadvertently, he managed to pull down the "View" menu at the top of the screen and select the "Mark up" option. If you are in a Word document where "Track changes" has been turned on, hitting "Mark up" will reveal all the deletions and insertions ever made in the document, complete with times, dates and (sometimes) the initials of the editors. When my son did it, all the deleted passages in a document with the innocuous name "Administrator's Weekly Economic Report" suddenly appeared in blue and purple. It was the electronic equivalent of seeing every draft of an author's paper manuscript and all the penciled changes made by the editors. I soon figured out that with a few keystrokes I could see the deleted passages in 20 of the 42 Word documents I'd downloaded. For an academic like myself it was a small treasure trove, and after I'd stopped hooting and hollering it took some time before I could convince my startled son that he hadn't done anything wrong.

Posting sloppily edited documents on an official Web site pales in comparison to some of the CPA's other mistakes. Its worst miscalculation was probably dissolving the Iraqi military on May 16, 2003, which jump-started the insurgency by sending 400,000 trained soldiers into the streets without jobs. In one of the best deconstructions of the CPA yet written, "Imperial Life in the Emerald City," the Washington Post's Rajiv Chandrasekaran's describes the enchanted, ideologically blinkered world of the CPA workers in the Green Zone, and recounts how their bubble began to deflate as the insurgency mounted and as the harsh reality outside the high walls of the Zone began to intrude. A close look at the deletions in just one of the improperly redacted Word documents from the waning days of the CPA reveals how the enchanted mind-set worked, just before the spell wore off.

The document that my son accidentally undeleted, Administrator's Weekly Economic Report, was dated March 28, 2004. Its content is dry and unremarkable -- it charts the value of the new Iraqi dinar, for example, and summarizes public-sector economic reforms. The only truly interesting parts of it, in fact, are the deletions, which are on another topic altogether.

Presumably, staffers at the CPA's Information Management Unit, which produced the weekly reports, were cutting and pasting large sections of text into the reports and then eliminating all but the few short passages they needed. Much of the material they were cribbing seems to have come from the kind of sensitive, security-related documents that were never meant to be available to the public. In fact, about half of the 20 improperly redacted documents I downloaded, including the March 28 report, contain deleted portions that all seem to come from one single, 1,000-word security memo. The editors kept pulling text from a document titled "Why Are the Attacks Down in Al-Anbar Province -- Several Theories." (The security memo and the last page of the March 28 report can be seen here, along with several other CPA documents that can be downloaded.)

Microsoft Word's "Mark up" feature shows the time and date of the deletion and the identity of the person doing the deleting, but it doesn't give the original author of the passage or when it was written. The title and hints in the text point to a memo written by one person in December 2003 or January 2004, when daily attacks on coalition forces in Anbar, the heavily Sunni province west of Baghdad that is the heartland of the insurgency, were the lowest in many months. These were the CPA's salad days. Prior to the al-Sadr uprising and the Abu Ghraib scandal and the failed siege of Fallujah later in 2004, the CPA believed that it was succeeding in reshaping Iraq. In his book "The Assassins' Gate," George Packer depicts late 2003 and early 2004 as the last phase of quiet isolation for the CPA, before the facts on the ground began to impinge on its Green Zone idyll. "Why Are the Attacks Down" shows the CPA on the cusp, as the author gives a half-dozen different theories for the short-term decline in violence.

One explanation given for the downturn is called "Rounding Up the Bums." It suggests that the U.S. military might have successfully quelled the insurgency. Maj. Gen. Charles H. Swannack, who commanded the 82nd Airborne in Iraq until May 2004, was well known for using aggressive tactics. The memo describes Swannack and other generals as believing that American raids on suspected insurgents were driving the bad guys "underground." The memo acknowledges collateral damage, but is blithely unaware of the implications. "Most raids also leave in their wake a number of innocents who were either rounded up and detained or had their houses busted up ... But there appears to be sufficient care in how the attacks are carried out, adequate information in the community about the mild reality of detention, and sufficient civil affairs clean up afterwards that this has not been a major factor." By April 2004, the infamous Abu Ghraib pictures had begun to surface, visual evidence of how the military had been alienating the Iraqi civilian population.

A second explanation hinges explicitly on an old ethnic stereotype about how Arabs only understand force. The "Crossed the Line" argument insists that violence is intrinsic to Arab culture: "[It] is a form of political discourse as well as being culturally acceptable for settling disputes and scores." The memo then argues that the violence in Anbar was quelled once the Americans proved they could be more violent. The Americans brought out a bigger stick, namely Gen. Abizaid's threat to "some 70 Sheikhs and community leaders" in Anbar "to unleash hell," twinned with the U.S. Air Force dropping some timely Joint Direct Action Munitions on the province.

A third explanation, "Occupation Ending," says that the insurgents are backing off because they think the U.S. is about to depart. "What they" -- meaning the Iraqis -- "have gotten wrong," says the memo's author, "is the idea that the military will be leaving Iraq in June, which one individual said he was sure was a major factor in the diminishing attacks. Oh well, this is one time it might be best that folks don't fully understand things." Supposedly, the CPA's June 2004 deadline for handing over sovereignty to the Iraqis was misread by some locals as implying the withdrawal of American troops, and thus caused the number of insurgent attacks to decrease. (Four years later, the Bush administration often says any deadline for troop withdrawal would increase attacks.)

A fourth argument, "Project Money Flowing," embraces an enduring pillar of American foreign policy in the Middle East. Economic development and free trade, according to the money theory, would solve political disputes. American cash was coming to Anbar, and violence was abating. "While the amounts of money are still modest, especially in Fallujah, there are a number of visible projects ongoing that have employed some people and given the appearance that help is on the way." If the violence was going down in Iraq, according to this theory, it must have been because the CPA's various development projects were paying off. In 2007, few would argue that there are many signs of economic development anywhere in Iraq, or that billions in U.S. aid has mitigated opposition to the American presence.

A fifth theory, "Engagement," says that Iraqis have begun to have hope thanks to sustained contact with Americans. "We'll take some credit here. We have been engaging widely with ... ex-Baathists, ex-Army. While many are tiring of the refrain that if you stay with us things will get better, for some they actually have improved and that many have given hope to entire groups." The author calls these people "the various groups of losers in the New Iraq."

A final argument for the downturn in attacks offers what briefly looks like a flash of reality. The "Operational Pause" theory surmises that reduced attacks may be a statistical blip. They may increase again as "terrorists" regroup for future fights against the Americans and "other Iraqis." But then the author calls this "a boring theory," and notes, "There are very few persons we have met who subscribe to this."

Nowhere in any of these theories, including the "boring" one, does the author address the dissolution of the Iraqi Army as a major contributor to the violence. Nowhere, in fact, does the author seem to know which "bums" or "losers" are attacking the Americans or why. Indeed, the most remarkable passage in the entire deletion is a simple statement by an Iraqi businessman, whom the writer quotes in passing while explaining why American-induced economic prosperity will end the fighting. "It is nothing personal," the Iraqi says. "I like you and believe you could be bringing us a better future, but I still sympathize with those who attack the coalition because it is not right for Iraq to be occupied by foreign military forces." In the world of the CPA circa 2004, first one American glosses over this Iraqi's prophetic words, and then another tries -- unsuccessfully, as it turns out -- to delete them.

Pete Moore is an associate professor of political science at Case Western Reserve University and the author of "Doing Business in the Middle East: Politics and Economic Crisis in Jordan and Kuwait."