With so much misery and defeat and no one left to sleep with, has this show's golden goose been cooked? 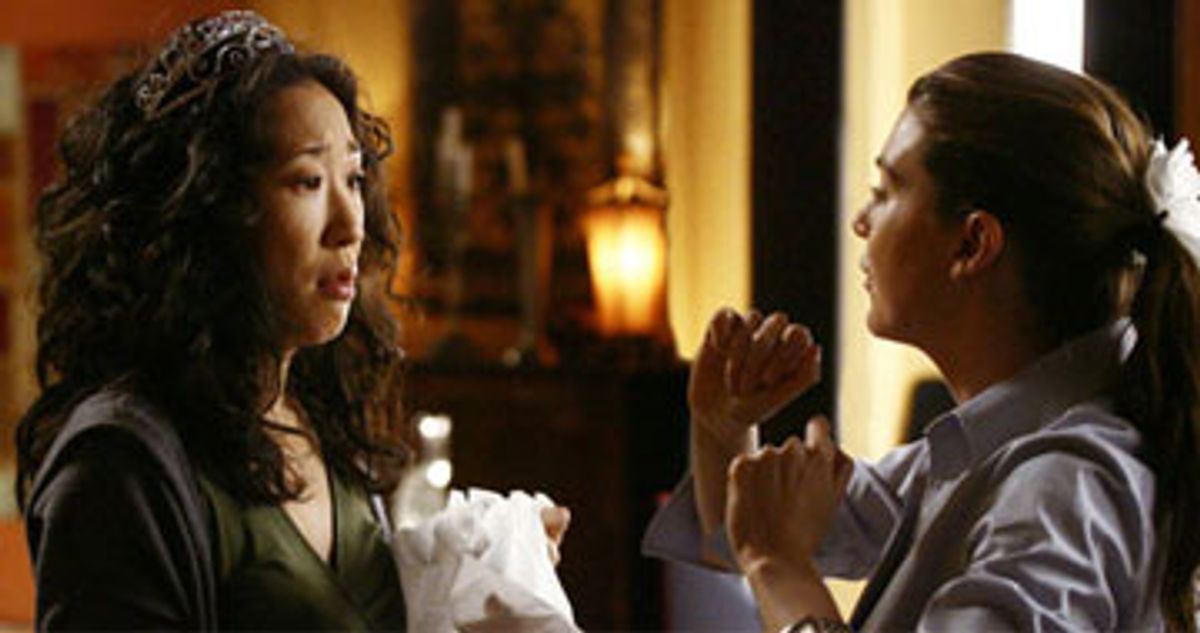 Cristina Yang does not look good without eyebrows. This is what we learned in Thursday night's "Grey's Anatomy" finale, along with a few other important life lessons: 1) Never put your (seemingly) dying climbing buddy out of his misery with an ax to the head; 2) don't have a baby with your wife if you're in love with your best friend; 3) study hard for your intern exam unless you want to repeat your internship; 4) if the thought of your upcoming wedding makes you ill, you might be making a mistake; and 5) if the thought of your friend's upcoming nuptials makes you ill, you might want to consider going back to therapy.

But those wacky kids on ABC's "Grey's Anatomy" don't learn important life lessons very easily, or if they do, they forget them by the next episode. That's why we find Meredith (Ellen Pompeo) going all wishy-washy on us over Cristina Yang's (Sandra Oh) wedding: When there isn't a boulder about to fall on Meredith's head (and there usually is, let's face it), she'll invent one.

Meredith: You marrying Burke restores my faith in me.

Cristina: Oh, I get it. My wedding's about you.

Not to nit-pick a show whose joys lie in being a big, soapy mess of heartfelt confessions and romantic longings and emotionally brutal twists, but is it really fair to pound home the idea that Meredith is hopelessly self-involved right now, when her mom just died, her stepmom just died, and her long-lost daddy just got drunk and slapped her in the face and blamed her for her stepmom's death? For that matter, is this really the time for Derek (Patrick Dempsey) to lay down the law with Meredith, threatening to dump her and date a pretty girl he met in a bar? Why not dump her the million or so other times that she has wavered and flaked out and second-guessed their love? Why now, when she's (not so clearly) reeling in the wake of a few major disasters?

And then we find out that the pretty girl is a new intern at Seattle Grace who's probably related to Meredith, since her last name is Grey -- another twist that's not all that easy to care about, really, since we've already uncovered a few of Meredith's long-lost relatives and they've all been pretty disappointing. On the other hand, Meredith is at her best when she's pining away, and what better way to pine than over McDreamy dating a hopelessly pretty second cousin or illegitimate sister?

But can we really get invested in another season of pining away?

"Grey's Anatomy" has countless charms -- snappy yet moving dialogue, nice-looking humans, fast-moving story lines. But lately one of those strengths -- those hurtling plotlines -- seems to be killing creator Shonda Rhimes' golden goose. Once Alex (Justin Chambers) has been romantically involved with Izzie (Katherine Heigl), Addison (Kate Walsh) and an amnesiac; George (T.R. Knight) has been in love with Meredith, Callie (Sara Ramirez) and Izzie; Derek has been with Addison and Meredith; Addison has been with Derek, McSteamy (Eric Dane) and Alex, why would we take any of these romances seriously? And, on the other hand, we're supposed to believe that Meredith and McDreamy are the Love of Each Other's Lives, so when either of them hems and haws, it just feels like filibustering.

Similarly, it was clear before Thursday night's finale that Cristina didn't want to marry Burke (Isaiah Washington) -- we've seen way too many examples of how she has surrendered her true self to the relationship and how she's in conflict over settling down in general. So why should we be too bent out of shape if she ends up leaving him at the altar? The promos for the show's finale might as well have blared, "Tune in for the moment when Cristina leaves Burke at the altar!" The only scene that complicated this outcome -- in high "Grey's" style -- was one in which Burke rehearsed his vows in the operating room to Izzie and Addison (which, of course, tipped off that he'd never deliver them):

Burke: I am not optimistic, I am not full of hope. I am sure. I am steady. And I know that I'm a heart man. I take them apart, I put them back together, I hold them in my hands. I am a heart man. So of this, I am sure. You are my partner, my lover, my very best friend. My heart beats for you. And on this day, the day of our wedding, I promise you this: I promise you to lay my heart in the palm of your hands. I promise you me."

As the female doctors and nurses in the room gasp, Burke looks around, then asks, "Too trite? Because I can rewrite it." Finally Addison says, "I think I speak for every woman in this room when I say dump her. Dump Yang, and marry me."

Walsh's crappy spinoff almost made us forget what excellent comic timing she has. Hopefully, if "Private Practice" fails, she can return to Seattle Grace and to the frank demeanor and wry asides that make her scenes a highlight of "Grey's."

Sandra Oh is another highlight. She's fantastic and believable as Cristina, even if, without eyebrows, she looks just like a creature from "Pan's Labyrinth." Her angry deadpan is great for scenes like the one where her mother tells her, "I always feared you were too emotionally stunted to settle down!" It's a testament to Oh's appeal that when Cristina is stalling at the church and Meredith tells her, sternly, to go get her happy ending, we almost want her to march down that aisle, even though we saw this coming for months and we know that getting married will be wrong for her in the long term.

The best scene of the finale was Cristina's unpredictable, manic, half-relieved, half-devastated breakdown post-failed wedding, when she goes home to find Burke gone and then, after screaming at Meredith to help her get out of her binding wedding dress, breaks down sobbing. "Grey's Anatomy" has a deft hand with hard cases -- Cristina, Alex, McSteamy, Bailey, Burke. We care about them, even though we can see they're going to mess up and push people away, over and over again.

But then again, the softies (Izzie, Callie, Meredith, George) are pushing people away, too. In fact, maybe that's the problem here, a pattern that repeats itself in every story we see: Unrequited longing, rising sexual tension, teary-jerky confessional outburst, lonely montage of heartbroken gazing into middle distance while strummy Lilith Fair music plays, confessional outburst No. 2, all of it wrapping up with the Big Breakup or the Big Sexy Reconciliation. Next week, repeat steps one through six and call me in the morning.

"Grey's Anatomy" will offer up a charming, enjoyable diversion even if it stays on its current repetitive course and rides that pony into the sunset. But if Meredith and her friends want their happy ending, then this pony better learn a few new tricks.