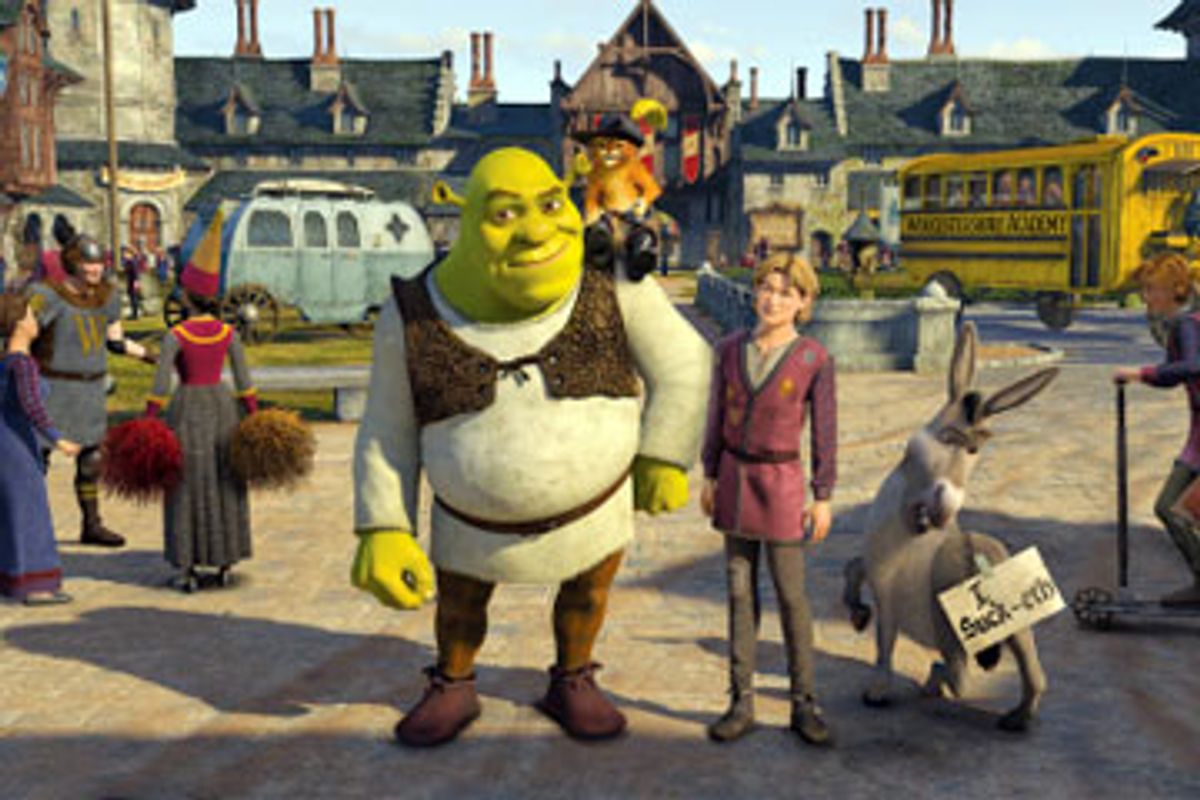 By now we all know that the Shrek movies, bedecked and bejeweled with pop-culture references that only grown-ups could get, are designed to appeal as much to adults as to kids: The 2004 "Shrek" had plenty of kid-friendly gross-out humor, but it also found room for an intelligent use of John Cale's version of Leonard Cohen's anthem of despair "Hallelujah." And "Shrek 2," the better of the two pictures by far, addressed the idea of marriage (or longtime partnership) as the dangerous adventure that it is, and even explored, in strictly PG-rated terms, the unpredictability of sexual attraction. All that, and good poo-poo jokes. No wonder the first two "Shrek" pictures made so much money.

But with "Shrek the Third," the knowing, self-referential quality of the first two movies (which was annoying enough, although mostly tolerable) kicks into high gear. "Shrek the Third" brings back the characters you may have loved, as I did, in the earlier movies: My particular faves are Antonio Banderas' poon-hound Puss-in-Boots and the grumpy gingerbread guy (voiced by Conrad Vernon), who has wriggly frosting "scars" where his legs have been reattached. Even though the hyper-realistic computer-animation of the "Shrek" movies gives me the willies, there's no denying that the filmmaking teams behind these pictures have a knack for clever visual touches, and "Shrek the Third" is no exception: There's some cute stuff here, most notably a gaggle of fuzzy, winged donkey-dragon babies, the offspring of Eddie Murphy's Donkey and his doe-eyed dragon lady friend.

But with "Shrek the Third," the Shrek idea team seems to have become completely lost in the forest. (The director is Chris Miller, making his feature debut. The writers are an ampersand-loaded jumble consisting of Jeffrey Price, Peter S. Seaman, Miller and Aron Warner, working from a story by Andrew Adamson, director of "Shrek 2.") In "Shrek the Third," Shrek (Mike Myers) and Fiona (Cameron Diaz) have reluctantly assumed the royal duties of the Frog King of Far, Far Away (John Cleese), who has been taken ill. They don't like this gig: All they want is to return to their beloved swamp home, and Fiona hints that the pitter-patter of little ogre feet may soon become a reality. Then the Frog King croaks. (His funeral song is a truncated version of Wings' "Live and Let Die," the first of the movie's hundred-zillion pop-culture references designed to tickle baby boomers.) But before he does, he reveals that the other heir to his throne, besides Shrek, is someone named Arthur. Shrek, who has no desire to be king, locates this Arthur fellow (he's actually an awkward teenager named Artie, and his voice belongs to Justin Timberlake) and drags him back to Far, Far Away to train for king duty.

Of course, the evil Prince Charming (Rupert Everett) wants the crown for himself, and to that end, he's marshaled every disenfranchised fairy-tale villain he can find. (He rounds them up at the local honky-tonk, where a wicked witch croons a heartfelt version of the '70s self-pity, self-empowerment ballad "I've Never Been to Me.") Amassed, they storm the gates of Far, Far Away and hatch a plan to do away with Shrek; and when Prince Charming realizes Artie is the real enemy here, the kid is endangered too.

"Shrek the Third," like its most recent predecessor, attempts to deal with some real-life grown-up issues, most notably the fears of parents-to-be: Shrek has a nightmare in which he's surrounded by hundreds of infant ogres, all wriggling just out of his reach as they play with knives and crawl toward broken glass. But "Shrek the Third" just feels sluggish and tired; its relentless, not-so-great gags hit with the soft thud of stone-hard bread crumbs. And the pop-culture references, presented with an affected casualness that's really its own kind of winking and nudging, become nearly unbearable by the last half of this exhausting 85 minutes: At a medieval high school, a couple of stoners emerge coughing and giggling from a smoke-filled fairy-tale "van." (In the school's assembly hall, there's also a banner proclaiming "Just Say Nay!") Merlin (Eric Idle), of Arthurian legend, appears as an addled aged hippie who wears socks with his Birkenstocks. The whole affair stinks of boomeritis -- an insistence that even with all this newfangled technology, our generation was really where it was at, man.

Even though many people are waiting longer to have children, the majority of parents with children of an age to appreciate the Shrek movies were, in their own youth, probably more into Sebadoh and Dinosaur Jr. than Canned Heat, but never mind that. Just when I realized, gratefully, that "Shrek the Third" was rounding its way toward "And they lived happily ever after" (at least, thank God, for now), I was hit with a closing-credits sequence featuring Donkey and Puss-in-Boots wrigglin', jigglin' and generally gettin' down to their own version of Sly and the Family Stone's "Thank You (Falettinme Be Mice Elf Agin)."

I'm not lamenting that the ideals and artistry of the 1960s have been co-opted for crass commercial purposes: To do that, I'd have to believe in the unequivocal purity of '60s culture, and I don't. Plus, the art -- that is to say, the music -- that speaks most to us is of course going to be the very thing giant corporations seize for their car commercials, their fast-food spots, their latest laptop campaign. Why not use the Rolling Stones to sell Volkswagens, or Bob Dylan to sell lacy bras? As the cultural critic Greil Marcus has noted, a good song can survive that kind of commercial recontextualization.

But maybe there's a difference between recontextualization and uncontextualization. The use of "Hallelujah," in "Shrek," was an example of the former, a way of harnessing a song's mood and power for a specific dramatic effect. But the reckless banditry of "Thank You" is the latter, a feel-good, booty-shaking, empty-headed cover that smears this exhilarating, celebratory, but only cautiously triumphant song, a song that blasted into the culture in late 1969, exploding -- or possibly collapsing -- the space between the Civil Rights movement and the Age of Aquarius. Of course, we can't expect a movie like "Shrek the Third" to parse the meaning or significance of a great song. But when it attempts to reduce a great song to a hollow backing track for the sound of movie patrons' filing out of the theater, trampling popcorn boxes and soda cups along the way, we don't have to dig it. We can, and we should, just say nay.