The tortuous road to Tehran

From Cheney's bellicosity to Rice's coy diplomacy, the U.S. approach to Iran has seemed schizophrenic -- and may have unexpected consequences. 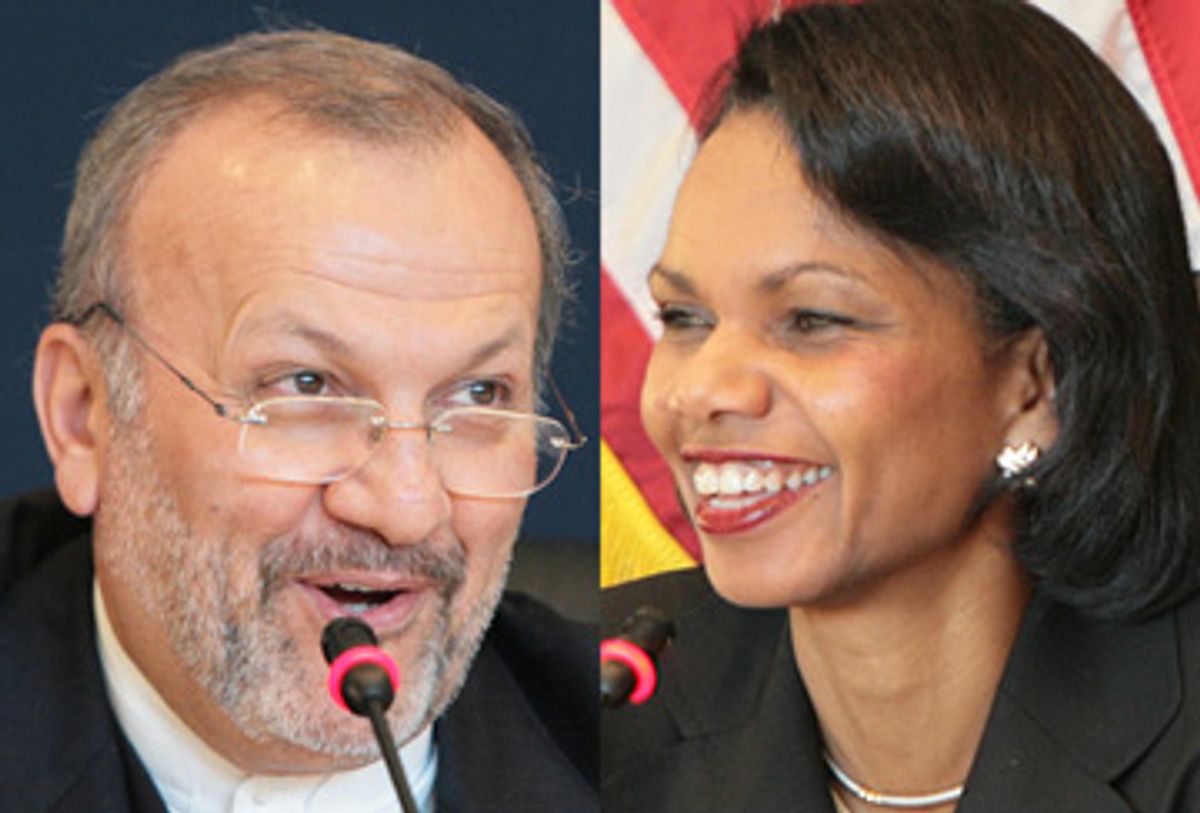 Lately, it has been easy to wonder whether the Bush administration has fallen into complete disarray when it comes to its Iran policy. Judging by its actions in recent months, it is difficult to see whether the White House truly wants war or wants détente with Iran, a card-carrying member of George W. Bush's "axis of evil" and more than ever a linchpin of the Middle East. On the one hand we have the provocative roundup of Iranians inside Iraq and further bellicosity from Vice President Dick Cheney. On the other, we have diplomatic meetings between the U.S. and Iranian officials not seen in decades, important if not critical to shoring up the mess in Iraq.

Whether or not this seemingly schizophrenic approach is intentional, and I suspect it is not, it will produce some interesting consequences of its own. The irony is that the apparent disarray in and mixed messages from Washington may be quite effective toward Bush's apparent goal of weakening the Iranian leadership. A vacillation between threats of war and diplomatic engagement may hurt the government of President Mahmoud Ahmadinejad because it helps preserve a stagnant political status quo inside Iran -- and that leaves Ahmadinejad's citizens, who are suffering from a sharp economic decline under his leadership, increasingly restless. Inside Iran there has been talk of imminent war with the United States for at least two years now. But war has not come, and at some point the distraction from other concerns wears thin, allowing day-to-day problems, such as the soaring price of tomatoes, vegetables and other commodities to take over.

Meanwhile, a decisive move at this point in the direction of either war or détente could play directly into the hands of the most reactionary and right-wing elements in the Iranian power structure. If the U.S. managed to coax Iran to the negotiating table -- apparently able to do so only from a position of relative weakness and with the help of Shiite leaders in Iraq -- it would lend legitimacy and credibility to a government (or "regime," if you prefer) that the U.S. has spent the past three decades demonizing as undeserving of recognition. It also might be the only way to reach a face-saving solution to the nuclear crisis. It would lift sanctions and give a dramatic boost to the Iranian economy by jump-starting foreign investment, allowing Ahmadinejad to take credit for the single most important foreign policy breakthrough since the Islamic Revolution. Further, if normalized relations with the U.S. ensued, it would represent a grand success that the more moderate-minded reformers in power in the late 1990s and early 2000s were unable to achieve, and thereby cement the conservatives' claim to power.

If, on the other hand, the Bush White House continues with the neoconservative wet dream, taking a military road to Tehran and regime change, then the Iranian hard-line politicians and clerics will claim to have been proved entirely right in their distrust of the great superpower, or "Global Arrogance," as they have taken to calling the United States of late (an updating of "Great Satan" in line with current worldwide sentiments about the nation under Bush). They would undoubtedly be able to rally the Iranian military and people to their side, most political and military experts agree, and inflict great harm on U.S. interests -- another way in which to cement their domination of Iranian politics for years to come. In either scenario, Ahmadinejad and his ilk would stand to benefit politically; if neither materializes, they will continue to suffer politically as they have been.

Condoleezza Rice, who told reporters at a summit in Sharm el-Sheikh, Egypt, in early May, "I'm not given to chasing anyone," played a coquettish secretary of state, fawning after Manouchehr Mottaki, Iran's foreign minister. Even President Bush, who has always insisted that the United States does not negotiate with terrorists or their state sponsors, suggested that since Rice was "polite," she was well suited for the diplomatic endeavor.

But Mottaki's avoidance of a full-fledged conversation with Rice at the conference, which was widely covered by Iranian media, was put into further perspective when he later said that Iran was not interested in "chance" meetings with the U.S. involving casual conversation or small talk. (Mottaki had dodged a dinner with Rice ostensibly because it included a performance by a violinist clad in a Western-style dress, offensive to conservative Islamic sensibilities. But as the event was arranged by Arabs, one has to wonder whether some Sunni Arab leaders fear a U.S.-Iranian reconciliation even more than the neocons -- for they most certainly know the rules of Iranian diplomacy, which pointedly do not include parties with female dancers, singers or performers wearing anything less than the hijab.) Iran, he emphasized, would meet with the U.S. if and when a formal request was made (apparently having occurred since, leading to another diplomatic meeting in Baghdad, Iraq), along with a proposal for a definitive agenda. Mottaki, it seems, was not looking to be "chased" by Condi Rice in Egypt, but if he ends up one day in a chat with her over a nice cup of tea, Iran will claim that it was she who came begging and her government that capitulated to the mighty Islamic republic.

But in the meantime, the nuclear issue appears to be taking on new urgency, with International Atomic Energy Agency leader Mohamed ElBaradei -- who is hardly a Bush booster -- warning in mid-May that the Iranians have advanced their ability to enrich uranium. And only a week after Rice's relatively polite outreach to Mottaki, Cheney, the rather impolite gunslinger of the Bush administration, appeared on one of the two U.S. aircraft carriers within spying and striking distance of Iranian shores to once again put Tehran on notice.

Speak loudly, and carry a big stick; speak softly, and ask for help getting your stick out of Iraq -- ordinary Iranians watching in Tehran must really be starting to wonder what the deal is.

Yet while support for Ahmadinejad's government continues to erode among even conservative Iranian citizens, it is important to recognize a distinctly different Iranian perspective on the grand chess game between Washington and Tehran. The recent arrests in Iran of a former senior nuclear negotiator, Hossein Moussavian, who worked for the Mohammad Khatami government, along with the imprisonment of high-profile Iranian-American academic Haleh Esfandiary, affiliated with the Woodrow Wilson Center in Washington, appear to many to be part of a rising internecine political battle between supporters of former moderate President Akbar Hashemi Rafsanjani and reformist President Khatami and those of Ahmadinejad.

But there is also continuing paranoia about the true intentions of the Bush administration: Many Iranians are still inclined to oblige Dick Cheney and believe that the regime in Washington will in fact decide to go for broke in its quest to recast the Middle East in the name of democracy. Thus, spies may be lurking. In the United States, we may have a certain affection for hyphenated citizens, but there is no such love in Iran, a country that not only doesn't recognize dual citizenship but has long considered the acquisition of another nationality (even under the shahs) to be treasonous. Under Iranian law, an Iranian cannot become the citizen of another country unless he or she abandons Iranian citizenship. The catch is that also under Iranian law, if one abandons Iranian citizenship, then one is forever prohibited from entering Iranian territory on another passport. This means that Iranians who have American passports always travel home, if they travel there at all, on Iranian passports and maintain the myth, at least officially, that they have but one nationality.

American commentators have suggested recently that the high-profile Iranian-Americans under arrest in Iran are "soft hostages," but that is erroneous: Iran considers them Iranians and is not looking to send a message to the U.S., or to extract any concessions in order to release them. Rather, the message is to Iranian exiles: As long as Iran is under threat of a military attack by the U.S. (one it can indeed play up with Cheney's renewed help), its government considers any Iranian who works for the U.S. government (as in the case of one Radio Farda employee who has not been allowed to leave the country) or even an independent American think tank (such as the one Esfandiary works for) under automatic suspicion of being a spy. At the very least these Iranians might be seen as beneficiaries of the State Department's largess in agitating for democratic reform or a "velvet revolution" in Iran, as Iranian authorities have claimed in Esfandiary's case. Notably, inside Iran, those who normally protest the detentions of reformists or activists have been silent on the issue of the Iranian-American detainees, a privileged bunch who have for years avoided the kind of harassment that those who are politically active inside Iran face constantly.

With the prospect of a third round of United Nations sanctions in the coming weeks over Iran's refusal to suspend uranium enrichment, Ahmadinejad's government will continue to look for ways to divert attention from the harmful stagnation of its policies. Since Ahmadinejad was elected in 2005, Iranians have had to suffer worsening unemployment, inflation and a sputtering economy. They have been told they may have to suffer further sanctions in the name of unity and nuclear pride, but at the same time they now see the U.S. reaching out to their government, albeit while making a fist with the other hand. They are not necessarily willing to have improved relations with the West at any cost, but impatience with Ahmadinejad is growing by the day, and average Iranians want the matter settled, one way or another, sooner rather than later, so they and their government can get back to improving their lives.