Jack saves a teenager, but doesn't save the world, and then everyone says sorry. 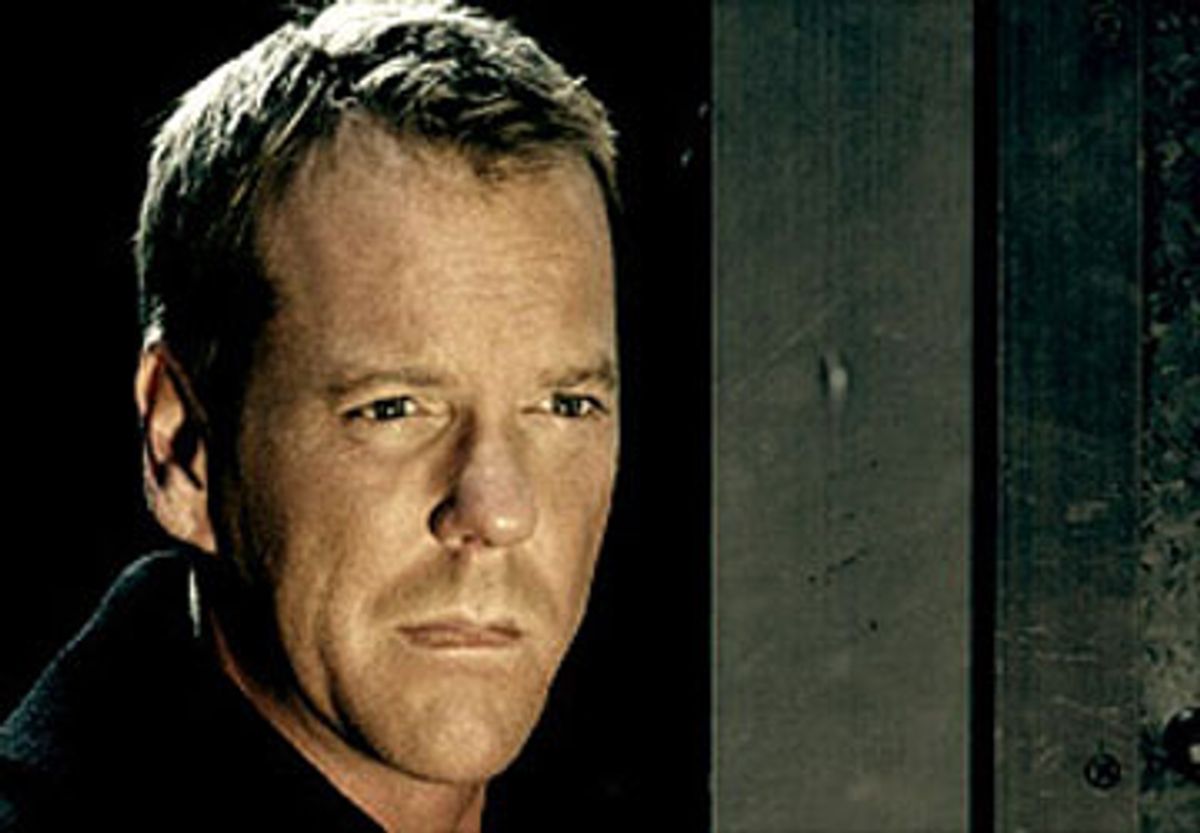 On Monday night, Fox concluded "24" with the only kind of finale that could do justice to this sixth season of the show: one that sucked, big time.

For most of the first hour of the two-hour finale, Counter Terrorism Unit agent Mike Doyle and Jack's nephew, Josh Bauer, sit at a picnic table by the beach, waiting for Grandpa Bauer to pick up Josh and drop off the sought-after circuit board, which Russian President Suvarov is ready to start a war over. Jack tells anyone who'll listen that the exchange is a crappy idea because his dad is a total dick who'll figure out some way to get the kid and the component. Sadly, everyone thinks that Jack just needs to work through his feelings for his father in therapy.

Only Karen Hayes believes Jack! Hayes, who fired her own husband to save her career earlier in the day, is suddenly willing to put her neck on the line for Jack Bauer, Chloe style (which Chloe can't do because she's having fainting spells, probably because Milo was a mole and Milo's "brother" just slipped her a brain-melting spy roofie). Hayes calls her husband, Bill Buchanan, who sounds a little sore, maybe because FBI agents are rifling through his personal effects as they speak. Hayes sends Buchanan to spring Jack from CTU custody so they can stop the ill-fated exchange from taking place.

But it's already too late! A motorized raft pulls up onto the beach: Doyle tells Lil' Bauer to stay put. A man dressed like a clown (OK, he's wearing all black) runs onto the beach and says "Pull my finger" (OK, he says "Send the kid down now!"). Doyle, pretending he has some leverage when, in fact, he's all alone without backup, says, "Show the subcircuit board first. I need to verify it." The clown puts a big gift box onto the beach (OK, it's a little metal box). Doyle opens the lid and b

Jack runs up just as Lil' Bauer is being spirited away. He can't get a clear shot! The boat takes off, probably to go to an offshore oil rig owned by Grandpa Bauer, Jack says. Doyle is badly injured!

"Get the kid! Get the kid, Jack!" Doyle yells as he's carried away on a stretcher. Jack says he will, but then he learns that Vice President Daniels has ordered a strike on the oil rig where the kid has been taken. Jack eyes a nearby helicopter. "Jack, don't even think about it," Buchanan says. But Jack tells Buchanan that he's not going to let that kid die. "It's wrong!" he says, apparently not referring to the 20 or 30 humans he kills over the course of his average workday. So Buchanan hijacks the helicopter with Jack, saying, "I don't want to live with this one either!"

Keep in mind that right now, on the finale of "Heroes," they're saving New York City from a nuclear holocaust (or not -- how would we know?). But on the "24" finale? They're saving a teenager with a bowl haircut because it's totally no fair for him to die. Way to raise those stakes in the sixth season, boys.

Nadia tells Jack she should've listened to him all along. Daniels admits that not trusting Karen Hayes was a big mistake, even though he just told her a few minutes earlier that she had blood on her hands for this. Not only that, but the V.P. says that President Wayne Palmer was a totally good guy whom he never should've doubted. (Really? Because we doubted Wayne a few times, like, just for example, when he ignored his doctor's warnings and then played an international game of chicken with that small, unnamed country in the Middle East.) "It's easy to think you've got all the answers when none of the ultimate responsibility lies with you," says Daniels. "But until you sit in this chair, you don't know anything." OK, we get it. This is Fox. And look, it's true: No one out there knows what it's like to be forced to make big ol' presidential decisions when you have a brain the size of a walnut.

On the oil rig, Josh attacks Grandpa. "You have to learn to control your emotions," Grandpa says. "You must never let them control you, do you understand?" Hmm. We're learning a lot about Jack Bauer in this scene. Maybe Audrey should watch this, once she snaps out of that catatonic state.

Josh knocks Grandpa in the head and grabs his gun. Grandpa says, "You're not gonna shoot me, give me the gun." And then, "You're the reason I'm doing all of this. I love you, Josh!" Blam! Josh shoots him. He wants to finish him off, but Jack shows up and tells the kid not to kill his grandpa because then he'll have to feel all weird about having killed his grandpa. So Josh runs to the helicopter, and Jack tells his dad that he's going to be held accountable for all of his evil deeds. Grandpa Bauer says something like, "No, I'm not! I'm going to die here! Muhahaha!" This bothers Jack, and he wishes he had time to torture his dad a little before the oil rig blows sky high, but he doesn't. Buchanan swings the helicopter around and Jack leaps onto a ladder hanging from it just as the oil rig bursts into flames.

Learning that the circuit board has been destroyed, Russian President Suvarov apologizes for the ugly tone he took with Vice President Daniels earlier. Daniels says he wishes that they could sometimes talk when they weren't totally mad at each other.

Chloe hasn't been drugged by a spy after all. She's pregnant! She tells Morris, who says that he totally didn't mean it earlier when he said they were through and she could go screw herself. Chloe says, "You know, this is a nice moment. Let's not ruin it by saying something stupid." Something stupid like "I love you"? Or something like "You just armed a bomb that could've killed millions of people"? Either way, you can't really blame her for being cautious, even if this is the least romantic scene to ever air on national television.

Lennox springs Hayes from the White House dungeon and tells her that her husband has been pardoned as well. Karen smiles and gets excited about redecorating their vacation home in Vermont.

Jack lets go of the hanging ladder, drops into the ocean and swims to shore, then waves Buchanan away. Then he shows up a few minutes later at James Heller's house, which is apparently just a short stroll away.

Jack points a gun at his former boss's head and asks, "Why didn't you try to get me out of China?"

"You're right, Jack. It wasn't fair for me to blame you for what happened to Audrey."

Then Heller, who earlier in the day ordered Jack to stay away from his daughter, takes Jack to a back room, where his daughter is sleeping. Jack apologizes to Audrey for not taking care of her and not being able to give her the kind of life she deserves. He also says he's sorry that her new show got canceled, and that this season on "24," all she got to do was stumble around, all dirty and mumbling. Audrey is asleep, but you can tell that if she were awake, she'd have something to apologize for, too.

Then Jack turns to the camera and apologizes for wasting our time with this season of "24." OK, he didn't really do that. He didn't need to. Fox Entertainment president Peter Liguori already did it for him last week.