"The donkey in the room"

As Al Gore promotes his new book in California, audience members are asked not to ask that inconvenient question. 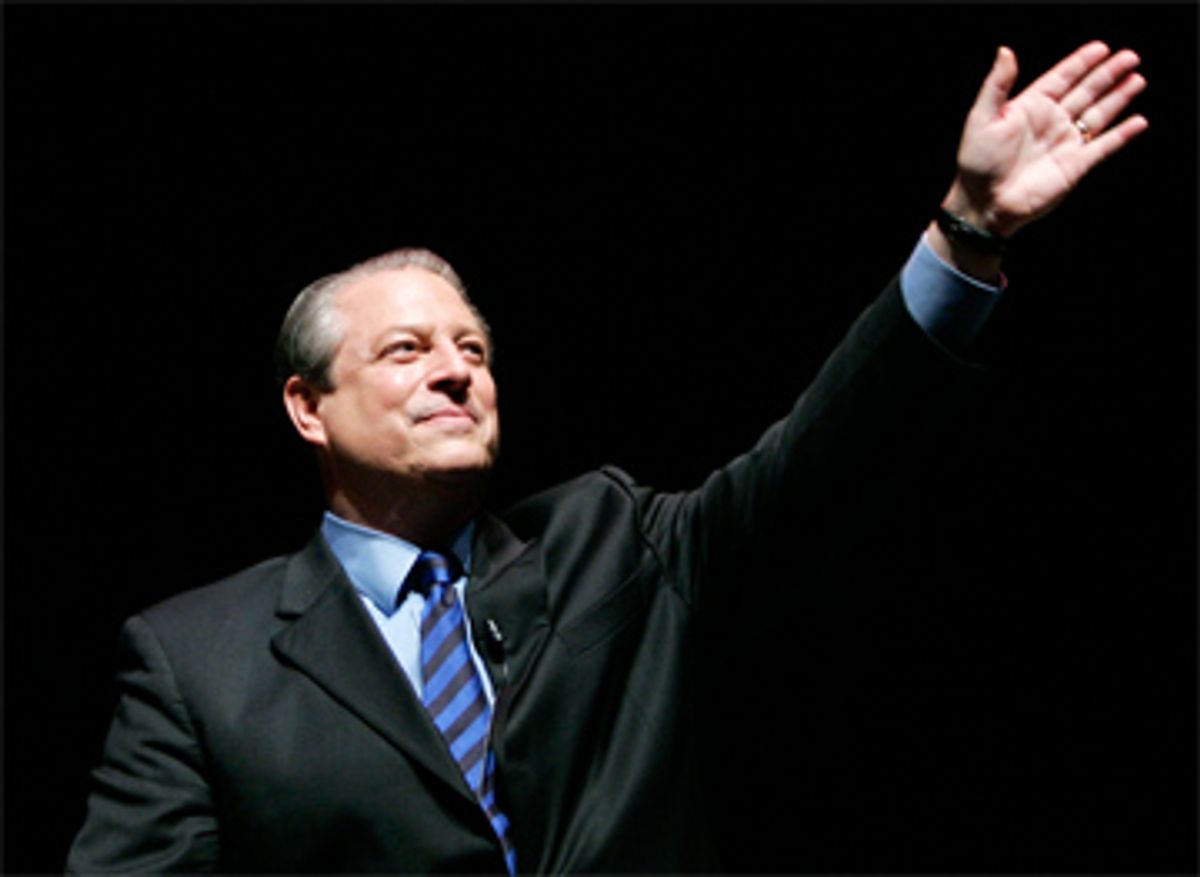 Last night, there was hybrid-car gridlock in the parking lot of the Marin Veterans' Memorial Auditorium. Hundreds of Toyota Priuses were haphazardly parked in red zones and on a nearby lawn. The most ecologically responsible drivers in the Bay Area had converged on this suburb north of San Francisco to hear vice president turned environmental crusader Al Gore talk about his new book.

The affluent, largely middle-aged liberals who had sold out the 2,000-seat venue, men in silk tropical shirts and khakis, women in strappy sandals, were there to celebrate an environmental hero, Nobel nominee and Academy Award winner and get a signed copy of "Assault on Reason." But "Assault on Reason," officially released on Tuesday, is also an assault on the current state of American politics, and the subtext of the evening was whether the erstwhile Democratic presidential nominee might be weighing another run for the White House.

Just outside the building, 29-year-old Chris Vallone, organizer of San Francisco for Al Gore in 2008, certainly hoped so. He had set up a table to sell Gore in '08 buttons for a dollar. "I think it's more likely that he'll run each passing day ... He can afford to enter late and getting in the race early isn't ever beneficial."

Inside the auditorium, other Gore supporters wore T-shirts and buttons and passed out fliers. And as soon as the former vice president's name was announced, before he even set foot onstage, the audience jumped to their feet, clapping and cheering. They kept applauding for close to a minute after Gore appeared, dressed all in black, pressed his hands together and bowed.

Gore did not begin his lecture with the Bush bashing the crowd clearly craved, though "Assault on Reason" contains a vigorous indictment of the current administration. Instead he led with a professorial history of mass communications, occasionally stumbling over his words as though he had too many ideas coming at him too fast.

The book, he explained, was meant to answer a simple question: "Why was our beloved country so shockingly vulnerable to such crass manipulation?" His answer, in part, seems to be our "new information ecosystem," in which television is the major medium of communication. In his book, he scolds the average American for spending a whopping four hours and 35 minutes watching TV each day and takes shots at our obsession with the celeb-sagas of O.J. Simpson and Anna Nicole Smith. Aside from the occasional applause line about the 24-hour-news networks, his condemnatory sermon about the current American cultural landscape met with approval but not hosannas.

But then he finally began serving the crowd what they'd been waiting for. He started talking about the current administration, but playfully, without using any proper names at first. "Millions of Americans in recent years, and I'm among them, have had the uneasy and growing feeling that something has gone basically wrong in the United States," he said. The audience erupted. "And it's been hard, hasn't it, to put your finger on ... exactly what it is," he continued. There was riotous, satisfied laughter from the crowd. Like a practiced performer, Gore brought the laughter to a halt, throwing up his hands and saying, "I mean that in all seriousness!" He continued, "Let me give you an example: George Bush and Dick Cheney" -- the audience hissed wildly -- "consistently conveyed the false impression that the person responsible for attacking us on 9/11 was Saddam Hussein. That was horribly wrong."

He seemed wary of fanning the flames of anger -- in that sense, he's utterly loyal to the credo of his new book. More than anything, he believes that having been blinded by fear and emotion, we need to return to a basic respect for reason. But his book is still fiery in its own right. He argues that the Bush administration had clear warnings about the 9/11 terrorist attacks and could have prevented them; he details widespread, institutionalized corruption in the administration; and he describes a fundamental disrespect for science, logic and the rule of reason.

And for all his oratory caution, he does seem to have been revivified. As Chris Vallone would have it, he has become "Al Gore: Unplugged." No longer hemmed in by political handlers or a focus-grouped message, he is looser and more natural in his role as unalloyed advocate and public intellectual. He roamed the stage, deadpanning one-liners, comfortable in his own un-Shrummed skin.

But what everyone wants to know is just how comfortable he is with the idea of reentering the brutal arena of electoral politics. Though he has said outright, more than once, that he isn't thinking about the White House at the moment, all his actions get interpreted as evidence for or against a possible presidential run. Even his recent weight loss is seen as proof he's running, rather than the desire of a 59-year-old man to stay healthy. But Gore himself has contributed to the rampant speculation. Tuesday night on "Larry King Live," he implied that he might join the fray at some later date. "I'm one of those who doesn't like to see the Christmas goods put in the stores right after Halloween. I don't think Americans are well served by having an endless campaign."

His book tour only feeds the presidential buzz. After he finished Wednesday night's speech, he said, smirking, "I was supposed to just speak for 15 minutes." He had spoken for 50. Then he took questions from the audience, but only certain questions. The queries had been submitted on index cards, and then screened. "We're gonna disregard the donkey in the room," teased the moderator of the Q-and-A, "and we're not gonna ask that question." More laughter, and another coy smile from Gore. Immediately, a bright yellow sign shot up in the audience, reading, "Run Al Run!"