"I'm so tired of America"

Rufus Wainwright on his new record, its sometimes apocalyptic vision, and the lyric that's causing a commotion. 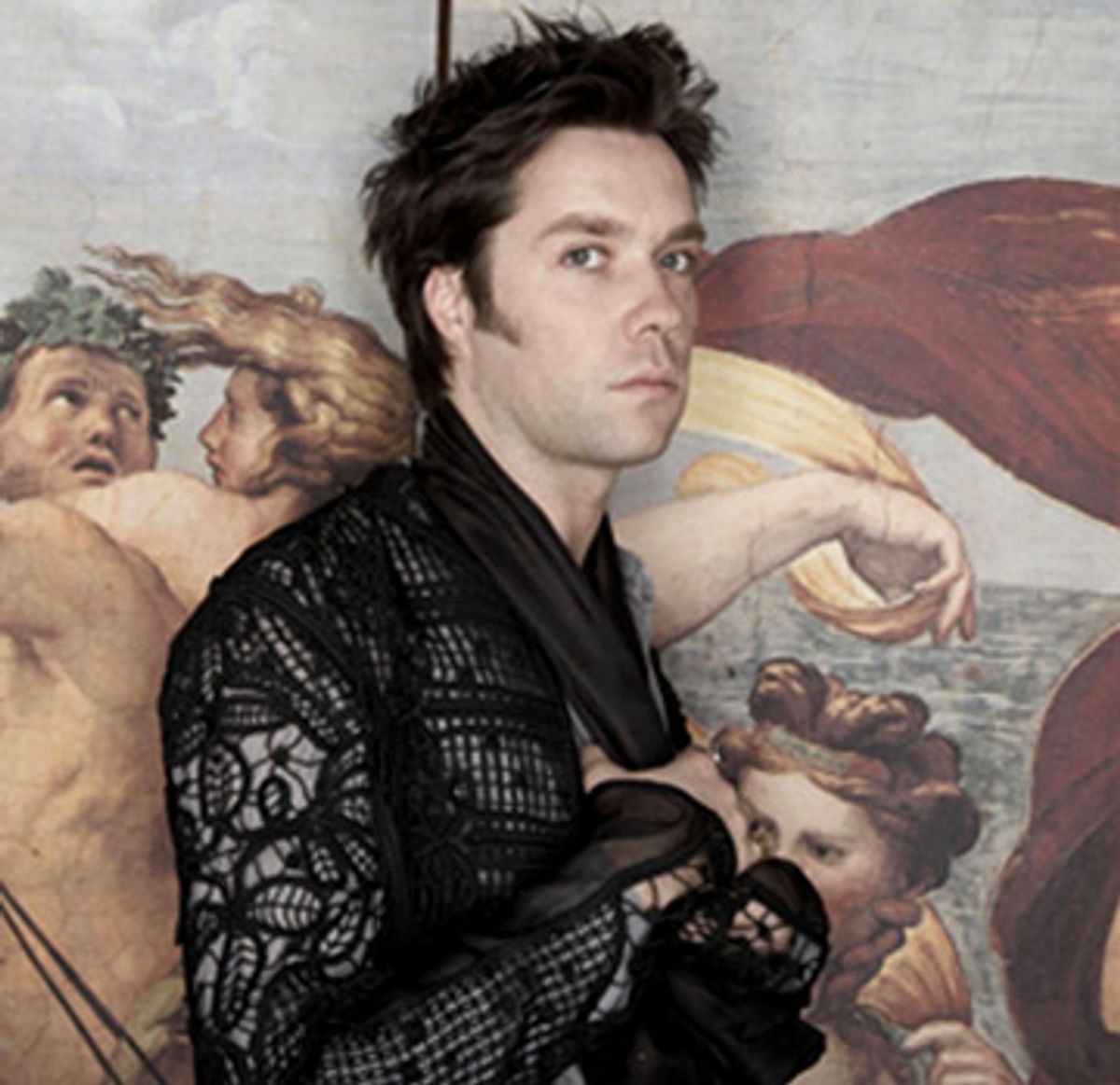 At 33, Rufus Wainwright is the man that became of the young Orpheus who stunned and amazed with his 1998 eponymous debut and 2001 masterwork, "Poses." Since then, he has released two critically acclaimed albums, fallen in love, survived addiction, had an opera commissioned by the Met, and even written its first act. Just a day after its release, his fifth album, "Release the Stars,"

did something that none of its predecessors had managed: "I'm No. 2 in England today!" he said with mock pride during our phone interview. "I'm right behind Linkin Park!"

Wainwright left his home in New York for Germany to write his new work, which has attracted attention for its grim view of America. "It is a sad situation," he says. "I still love this country, but I do feel like we have lost a big chunk of our soul. That's why I went to Berlin, in a lot of ways. Places that have experienced great defeat experience a kind of rebirth, which I think America has to do -- unless we want to get more decrepit. I don't think we have to destroy the place totally."

Cataclysms pervade the Wainwright catalog. In the beginning the disasters were personal -- in the loneliness of "Vibrate," the emptiness of "Want," the ecstatic self-erasure of "Poses" -- but his new album treats larger disasters: "Why does it always have to be water? Why does it always have to be holy wine? Destruction of all mankind?" Wainwright asks on "Do I Disappoint You," the album's opening track. The second song, "Going to a Town," finds its narrator leaving for a place "that has already been burned down," lamenting as he goes: "I'm so tired of America."

"I feel somewhat disconnected from this song," he says, aware of both the Geffen Records publicist listening in on our call and the realities of George W. Bush's America as he attempts to embrace this most powerful -- and for some, scandalous -- lyric. "I literally sat down before dinner one day and five minutes later the whole thing was there. So I just consider myself more of the messenger of a general pathos, really: what's happened to the democracy and with this war. I'm just stating the obvious at this point. It's more kind of a healing gesture, really. It's more getting through the stages of mourning."

"Going to a Town" has been hailed as among Wainwright's finest songs, on this album or any other. It also sets up perhaps the strongest of this album's thematic fugues in an exploration of the idea of flight before disaster, that great and unspoken post-millennial American fantasy. Wainwright reprises "Leaving for Paris," but not before offering some of the most disturbing lines he has yet sung, in tones so uplifting that you will find yourself bouncing along if you don't really pay attention:

The trumpets of angels blast as he works his way up the scales, gay Messiah ascending. An equally stark dissonance between melody and message might be found in "Poses'" "Cigarettes and Chocolate Milk," whose childhood nursery rhymes come so beautifully at odds with its meth-addled voice and story. That was a personal darkness, though, and a different time. It wasn't long after "Poses" broke that Wainwright entered a dark phase of crystal meth addiction that led to tales of debauchery, hallucinations and a Hail Mary call to Elton John that eventually helped get him into rehab. On "Release the Stars" Wainwright seems to have moved past personal apocalypses to dance about with the biblical one. But who could have imagined that the end of the world would sound baroque? Or that Wainwright and his boyfriend would be the only ones to make it out alive? Or that the two of them would play "Phantom of the Opera" as they went?

"I'm definitely a fan of juxtaposition," he explains. "Using the most beautiful line to say the most horrific thing -- I think one of the main things in songwriting is definitely friction between the words and the melody. It's got to be done very delicately because both elements are somewhat explosive, and all of a sudden the song becomes like a crystal meth lab. You know, you don't want to blow up your family."

Though free from family-slaying meth-lab explosions, "Release the Stars" has a good collection of Wainwright's slaves, impartial creations that tantalize with hints of more fully realized selves. And it's mostly the love songs. "Slideshow's" weak refrain -- "I better be prominently featured in your slideshow ..." -- keeps its melody from orgasmic wonder. "Tiergarten" reflects the hyper-manicured, German garden it's based on; it's pretty, simple and without any evident purpose. "Sanssouci" starts out sounding like a less inspired version of "Movies of Myself," and it ends that way too.

"I don't believe that people really change," says Wainwright, when asked how the years have changed attitudes and writing on love. "I think you just develop other personalities -- a whole set of people who you've been in terms of love. Whether it's kind of a sex fiend, or a romance addict, or in a devoted relationship -- which this album deals more with -- I've kind of lived a wide variety of them. With boys, that is."

As it happens Wainwright is no longer a foolish lover, but a jealous one who demands inclusion in slide shows. So where within him is the young Catullus who wrote "Foolish Love"? Or the Tin Pan Alley Daedalus who gave us "14th Street"? What about the denizen of the Chelsea Hotel who set down "Poses," which lets us all know what the night must have sounded like to Jay Gatsby as he stood on his dock, transfixed by green light?

"I definitely consider 'Poses' -- the whole album in fact -- to be kind of a miracle," he says. "Like the last breath of that moment when decadence is healthy, 'Poses' encapsulates that feeling. It's a kind of song and a kind of album that I'll never be able to repeat." Everyone knows that Orpheus doesn't get to look back. And yet, the near brilliance of "Release the Stars" makes one hope that Wainwright is able to find that place of pure magic again, and that perhaps this time he won't have to suffer so terribly in his own underworld to get there.