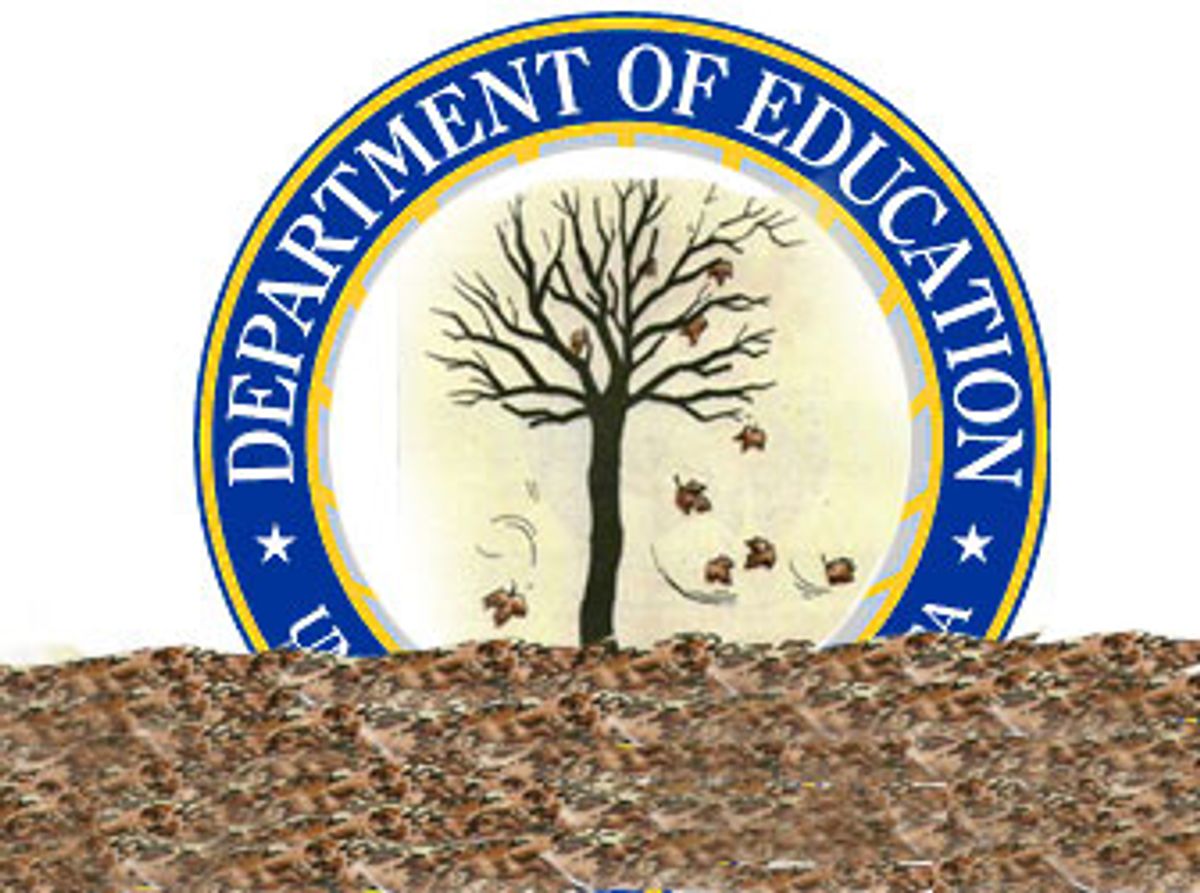 Secretary of Education Margaret Spellings sounded like a reformer when she testified on Capitol Hill earlier this month over recent revelations of waste, fraud and bribery in the $85 billion-a-year student loan industry.

"Federal student aid is crying out for reform," said Spellings, speaking before the House Committee on Education and Labor. "The system is redundant, it's Byzantine, and it's broken."

But education experts weren't buying it -- and neither were Democrats. Spellings glossed over the fact that the Department of Education, which she took over in 2005, had known since the start of the Bush administration about questionable financial practices and had only recently asked lenders to stop them. The committee's new Democratic chairman, California Rep. George Miller, whose attempt to stop the flow of cash had been thwarted while Republicans controlled Congress, rebuked Spellings for her inaction. Either she or her predecessor, Miller said, "could have stopped this hemorrhaging of money that [lenders] were not entitled to." For six years, there had been what one House staffer called a "Wild West atmosphere of no enforcement at the department," and it had cost taxpayers hundreds of millions of dollars.

From a 2001 internal Education Department memo warning the incoming Bush administration that lenders might be trying to improperly influence college financial aid offices, to a department whistle-blower, to numerous reports outlining a virtual hemorrhaging of the department's money, for nearly six years there have been signs pointing to something rotten in the state of the student loan industry. But time and time again, according to congressional staffers and Washington education experts, the department leadership and key members of Congress looked the other way.

"The day Bush was elected was the beginning of the gilded age for the loan industry," says Barmak Nassirian, of the American Association of Collegiate Registrars and Admissions Officers.

Between 2001 and 2006 a handful of companies that issue federally guaranteed student loans had what one House Republican staffer called "a banner five years," collecting hundreds of millions of education dollars by exploiting the so-called 9.5 percent loophole -- a 1980 provision that guaranteed certain lenders a 9.5 percent return on the loans they issued to students, no matter the actual interest rate of the loan. Nine-and-a-half percent may not seem onerous compared with the interest rate on an average credit card, but the student loan system was developed to allow young people -- most of whom have little or no credit history or collateral -- to borrow from the government at a low rate. By 2001, interest rates were less than 5 percent, which meant that on every loan billed under the 9.5 percent subsidy, the government was making up the difference by handing banks nearly twice as much as it gave the student borrowers.

In 1993, when Democrats controlled the White House and Congress, a law was passed halting the 9.5 percent payments for future loans. But eight years later, with interest rates low and the Bush administration in office, half a dozen or so lenders figured out that they could take a new loan and, by shuffling some paper, make it appear to be part of an older loan that would qualify for the subsidy. Suddenly, starting in 2002, these lenders -- including Nelnet, the Kentucky Higher Education Student Loan Corp. and the Pennsylvania Higher Education Assistance Agency -- were billing the Department of Education for more and more 9.5 percent loans, and the department began paying out hundreds of millions of additional dollars. While payments on 9.5 percent loans had held steady at below $200 million per year since 1990, according to a 2004 report by the Government Accountability Office, the amount of 9.5 percent payments rose from $209 million in 2001 to over $630 million in 2004. By June of that year, Nelnet was receiving 10 times the amount of 9.5 percent subsidy profits it did in December 2002, according to Department of Education data obtained and analyzed by the New America Foundation, a Washington think tank.

The increased payments should have raised a red flag, says Michael Dannenberg, director of the Education Policy Program at the New America Foundation. But the department "dragged its feet until 2007."

Rep. Miller agrees with Dannenberg. Miller told Salon he thinks the reason the loophole was left open was because of lax oversight within the Department of Education during the Bush administration.

"The department was warned in 2001 of the nature and extent of the problem and the fact that there was a scheme to milk millions of dollars from the taxpayers," says Miller, referring to a memo that was circulated department-wide. "They made a decision not to do anything about it."

The Department of Education disagrees with this characterization.

"We acted swiftly and appropriately within the law," says Kristin Conklin, senior advisor to the undersecretary of education. Conklin explains that the machinations by lenders, known as "recycling and refunding," were technically permitted under the law, and that to stop the high 9.5 percent subsidy payments, Congress had to act.

In 2003 Nebraska lender Nelnet actually wrote the department a letter explaining why and how it was charging 9.5 percent, and requesting guidance on whether the practice was acceptable. The department did not answer Nelnet's letter for more than a year, during which time Nelnet collected approximately $124 million in 9.5 percent subsidy payments from the department, according to Nelnet spokesman Ben Kiser. Unsure whether the earnings were legitimate, while it waited for the department's response, Kiser says Nelnet "deferred recognition" of the profits, holding them in a separate account. When the department finally answered Nelnet's letter, it made no explicit recommendations for or against the practice. So Nelnet went on billing the government, and the government went on paying.

But lax oversight by the executive branch of the government wasn't the only problem. The financial services industry has donated heavily to the campaigns of Republican members of the House Committee on Education and Labor for years, according to the Center for Responsive Politics. The list of donors includes JP Morgan Chase, Citibank, Bank of America and Nelnet. The industry's leading contributor is Sallie Mae, the nation's largest provider of student loans. In 2004, Sallie Mae donated three-quarters of its campaign contributions to Republicans.

Rep. Howard "Buck" McKeon, R-Calif., and Rep. John Boehner, R-Ohio, both of whom have served as chairmen of the Committee on Education and Labor, have received more than $50,000 from Sallie Mae, and Boehner's leadership PAC has received more than $120,000 from the company. At a 2004 fundraising event hosted by Sallie Mae, Boehner reportedly told the crowd of company execs, "Know that I have all of you in my two trusted hands." Nelnet didn't start contributing heavily until 2002, but was soon one of the industry's largest donors, giving close to 75 percent of its contributions to Republicans.

Steve Forde, a spokesman for McKeon, denies that the former chairman and his committee stalled on the 9.5 percent issue. Forde points to McKeon's work on the Taxpayer-Teacher Protection Act of 2004, which attempted to close the loophole.

"This is a matter of great importance to him," says Forde.

Rep. Tom Petri, R-Wis., a longtime member of the committee who appears to have received no significant contributions from the lending industry, has made affordable student loans a crusade for more than two decades. In an interview with Salon, Petri said that he has been frustrated for years by his colleagues' lack of interest in reforming the student loan system, which he says has suffered greatly from lax oversight by both Congress and the Department of Education.

"There has been a close link between the department, the committee, and Sallie Mae and other lenders," says Petri. "It became a problem because people weren't being as vigorous or sensitive to internal problems as they might have been."

In 2003, Joe Oberg, a researcher at the department, discovered the exploding 9.5 percent subsidy payments and reported his concerns to his superiors. But Oberg was silenced. Instead of heeding his warnings, he says, the department barred him from further research into the payments. Oberg says he took his concerns to the GAO, which was investigating the issue on behalf of Reps. Chris Van Hollen, D-Md., and Dale Kildee, D-Mich. The GAO report, which called on the department to change its regulations regarding the subsidies, helped force the issue in 2004, after a cover story in U.S. News and World Report titled "Big Money on Campus" provoked public outrage. For the first time in years it looked as if Congress might act to close the loophole for good. But the final bill, the Taxpayer-Teacher Protection Act, closed only part of the loophole allowing 9.5 percent payments, but again only for new loans, and only for one year. During debate over the act, Rep. Miller, then ranking minority member, warned his colleagues that the loophole was being inadequately addressed.

On Sept. 30, 2006, the Department of Education's inspector general issued a long-delayed answer to Nelnet's 2003 question about its use of the 9.5 subsidy. The report stated that the subsidy was not appropriate after all, and that the department could, and should, recoup $278 million it had erroneously paid the company. The department has since settled with the company, allowing Nelnet to keep the $278 million in exchange for its not pursuing payment of the more than $1 billion Nelnet believed the department owed it. (The Department of Justice is currently looking into the legality of the settlement. Nelnet is also unhappy with the decision, claiming the department knew what the company was doing all along.)

In November, when Democrats won back the House, Miller, an outspoken critic of the subsidy, became the presumptive incoming chairman of the House Committee on Education and Labor. In late January, three weeks after Democrats assumed control of Congress, the Department of Education finally issued a "Dear Colleague" letter, suspending all 9.5 percent subsidies that can't be proved eligible with an audit.

"She could have written that letter two years ago," says Dannenberg, of the New America Foundation. "And she should have."

In her May 10 testimony before the House committee, Spellings said that the reason the Education Department had not acted to close the subsidy loophole earlier was that it did not believe it had the authority to do so. Spellings said the department was, essentially, waiting for Congress to act. So while Congress and the department kicked the ball back and forth, hundreds of millions of federal education dollars continued filling the coffers of loan companies that had figured out how to, in Spellings' words, "game the system."

One day prior to Spellings' testimony, Congress had acted. In a show of bipartisanship virtually unprecedented in Bush's second term, the House passed the Miller-sponsored Student Loan Sunshine Act by a vote of 414-3. The new law bans lender gifts and requires colleges to disclose their relationships with lenders to students. Sen. Ted Kennedy, D-Mass., has introduced a similar bill in the Senate. Democratic presidential candidates Sen. Barack Obama, D-Ill., and John Edwards are both in favor of cutting banks out of the student loan equation entirely, and support encouraging students to borrow directly from the Education Department through its Direct Loan Program. The Direct Loan Program currently accounts for approximately 16 percent of the student loan market and is a less expensive program according to the Congressional Budget Office.

In his 2008 budget, Bush has proposed significant cuts to federal subsidies for lenders and increased funding for Pell grants.

Dannenberg -- who at 37 has just finished paying off his own student loans and recently began saving for his children's college tuition -- credits, among other things, a change in Congress for getting the ball rolling on some of these long-awaited reforms.

The administration, he says, "recognized that Democrats were going to be more aggressive in pursuing these excess subsidies," so made the moves it should have made years ago.

For now, according to Robert Shireman, executive director of the Project on Student Debt, the 9.5 percent loophole is finally closed, "unless somebody comes up with another very creative reading of the law."