Danish cartoons, no longer the rage

Danish politics lurched right as the scandal provoked Muslims worldwide. But now Danes are fed up with their own "Bush-lite" -- and are backing a Muslim immigrant. 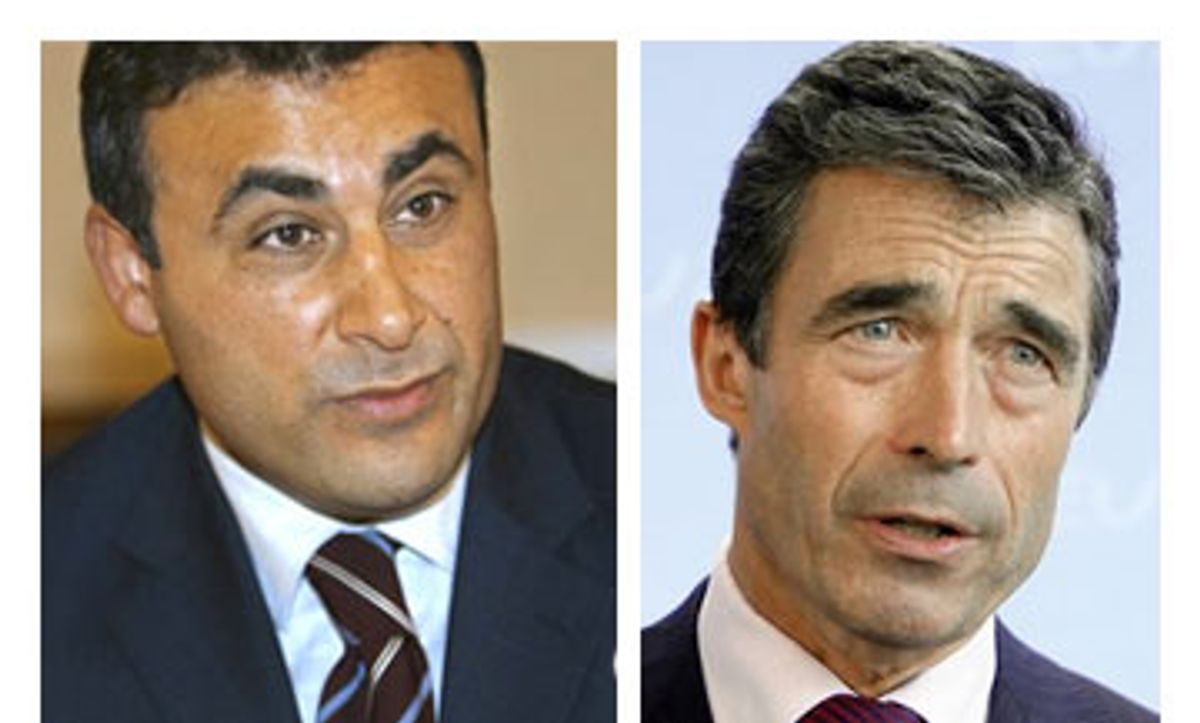 Many Danes were shocked when political cartoons depicting the prophet Mohammed, published by the Danish paper Jyllands-Posten, sparked Muslim outrage around the world in February 2006. Nevertheless, a majority of them backed Prime Minister Anders Fogh Rasmussen and the "never say sorry" policy of his government and its key parliamentary partner, the far-right Danish People's Party. I had spent the prior five years studying Islam in Europe and interviewing hundreds of Muslim leaders, and I wrote during the cartoon crisis that those in the Danish government and media who were spoiling for a culture war had failed to recognize the depth of Muslims' feelings and did not know what they had bargained for.

The scandal reached its apex as the Danish consulates in Beirut and Damascus were burned by mobs, and a boycott launched in Saudi Arabia against Danish goods led to big losses for Arla, Denmark's largest dairy producer. The cartoons had been published four months earlier, and protests from Muslims living in Denmark had petered out by the time demonstrations broke out elsewhere in February. Danes were unprepared for the international wave of anger and violence. By March 2006, according to research I've done, 250 people had died during protests against the cartoons, from the Middle East to Kashmir to Nigeria.

There was cynicism and grandstanding on both sides of the divide -- defiant diatribes from xenophobes defending free speech, and defiant diatribes from Muslim leaders bent on stirring religious radicalism. But after the hysteria died down, Danes were in for some soul-searching. They didn't like that the rest of the world suddenly thought they were racists. That discomfort grew over time, as their government and the Danish People's Party continued to pursue a zero-tolerance policy on immigration matters. Now, a little more than a year later, an increasing number of Danes want to restore more tolerant Danish values and are looking to a new political rescuer -- a Muslim immigrant, who was himself caught up in the explosive cartoon controversy.

The wave change became apparent on a Monday in early May, when Naser Khader, a popular parliamentarian, moved to form a new party together with two other defectors from Rasmussen's center-right government. Putting an end to the influence of the Danish People's Party in national politics is one of Khader's main objectives. Before the week was over, his "New Alliance" party had challenged the government's parliamentary majority, as a steady trickle of defectors winnowed Rasmussen's margin of power down to one.

Rasmussen harnessed his government to the whims of the Danish People's Party and set out to be a "Bush-lite." (Rasmussen's own party is called the Liberal Party, although the term does not denote leftist politics as it does in the United States.) He endorsed the White House's claims about weapons of mass destruction in Iraq and sent Danish troops to participate in the invading force. All of this earned Rasmussen an invitation to the White House and praise as a "good friend" by George Bush.

But Danes were fed up by this March, when the Danish People's Party used its influence to prevent the government from giving asylum to approximately 500 Iraqis who had served as translators for coalition forces and their families, and who now had reason to fear for their lives in their home country. The DPP had staunchly supported Danish participation in the war but refused to help the Iraqis, and people thought this was cruel: "We are responsible for putting these people out of their homes and now see how we treat them" was the reaction.

One recent defector from Rasmussen's party, Paul Schiøtt, a district party chairman, explained to a local paper that the reason he left to join Khader's New Alliance was that he could no longer look himself in the mirror. "I have felt badly for a long time about the Liberal Party's dependency on the Danish People's Party. The Liberals have in my view allowed themselves to be hugged and dictated to by a party whose view of humanity I do not share."

Khader became a target of activist Muslims during the cartoon crisis when he formed a new organization, "Democratic Muslims," in protest against the imams who worked to whip up anger against Jyllands-Posten, the Danish government, and moderate Arab voices arguing for a calm response from Cairo to Riyadh. Ahmed Abu Laban, a charismatic mosque leader with a past in the Muslim Brotherhood, who died unexpectedly in January, called Khader "a rat," while Ahmed Akkari, a hot-headed spokesman for a delegation of imams that toured the Middle East to push their message, suggested that if Khader ever became minister, someone should perhaps "dispatch two guys to blow up him and his ministry." As recently as April 2006, Khader announced that his days in politics were over because of such threats.

But now his future as a government minister is more likely than ever. His New Alliance gained 20,000 members in its first few days, and by the end of May, one-third of Danish voters said they approved of the new party, with more than 10 percent saying they would vote for it in the next election. In the fragmented Danish Parliament, that would give the party 20 seats and the ability to broker who forms the next government.

Khader is in many respects a typical immigrant and an unlikely candidate for the role of savior of Danish liberalism. He was born in Damascus, Syria, and came to Denmark in 1974. His father was a displaced Palestinian and insisted on a religious upbringing. Khader never speaks badly about his father and maintains that his own religion is a private matter. In general, he thinks that religion has no place in the public realm and has said that he would like to see Denmark become "a secular country," which would require a constitutional change to disestablish the national Lutheran Church. He also wants to create a civil registry and take the responsibility for running the population registry away from the church. (Amazingly, Muslims, Jews and other religious minorities in Denmark today have to go to the local Lutheran parish office to register newborns or the death of a relative. Likewise, proof of non-membership in the national church is required to avoid paying the compulsory church tax.) Khader knows such changes are unlikely to happen and has said he'll not push the issue.

But Khader and his supporters have promised to put different values at the center of Danish politics. They talk of an open and progressive approach to globalization, including tough but fair treatment of asylum seekers and immigrants, lower taxes, and welfare state reform. They also denounce the Rasmussen government for failing to distance itself from racist remarks made by Søren Krarup and Jesper Langballe, cousins and both former pastors in the Lutheran Church who were elected to Parliament from the DPP. Krarup recently said that there was no difference between the Muslim head scarf and the Nazi Iron Cross.

Khader would not be the first Muslim immigrant to attain a position as a government minister in Europe. Two women have already scaled that peak: Nebahat Albayrek, a minister of justice in the Netherlands, and Nyamko Sabuni, who is minister of integration and gender equality in Sweden. Neither Khader nor the two women are as dogmatic as former Dutch parliamentarian Ayaan Hirsi Ali, now at the American Enterprise Institute in Washington, D.C., who blames conservative orthodoxy and the prophet Mohammed for abuse and misogyny among Muslims. All three freely acknowledge their Muslim identity and are part of a quiet transformation of European politics that contradicts assumptions about the widening gap between Muslims and non-Muslims.

But the three do not hold their tongue when it comes to criticizing radical groups seeking to speak for Muslims. "I have only experienced one form for Islamism, and it is anti-modern and anti-democratic in nature," Khader wrote recently. "Islamism is not a faith, it is an ideology, and therefore there can be no happy alliance with democracy." Despite his criticism of Islamism, Khader supports Turkey's application to join the EU, which will be an important litmus test in European politics.

Khader and his colleagues went on a tour of the Danish provinces in mid May. The citizens of my hometown, Horsens, a red-brick provincial city of farmers and farmers' descendants, treated Khader and his colleagues as liberators when they went for a stroll through throngs of shoppers. New parties are rarely successful in Denmark, but in this case it looks like a groundswell.

The coming demise of the Blair-Bush era puts Rasmussen in a tricky position. His handling of the cartoon crisis, let alone the Iraq war, has come back to haunt him. Recently, Rasmussen announced that he would be happy to form a government with Khader's party after the next election, which is now likely to be brought up. The Danish People's Party has provided Rasmussen with his required parliamentary majority since 2001, and during the cartoon crisis the DPP stood to gain 10 seats and become the country's second-largest party. It's chair, Pia Kjaersgaard, has set the tone in Danish politics over the past two elections.

But Khader's party presents an opportunity for a new majority and an end to Kjaersgaard's influence over government policies. When asked if her party would contemplate a coalition with Khader's own, Kjaersgaard's answer was "No, no, no. They are the antithesis of everything we stand for." That is good news to many in Denmark, as it should be to the rest of Europe and beyond.

Jytte Klausen is a professor of politics at Brandeis University and author of "The Islamic Challenge: Politics and religion in Western Europe" (Oxford UP).