Will buying educational toys make your kid a genius -- or just leave you broke? Author Susan Gregory Thomas cuts through the baby-business babble. 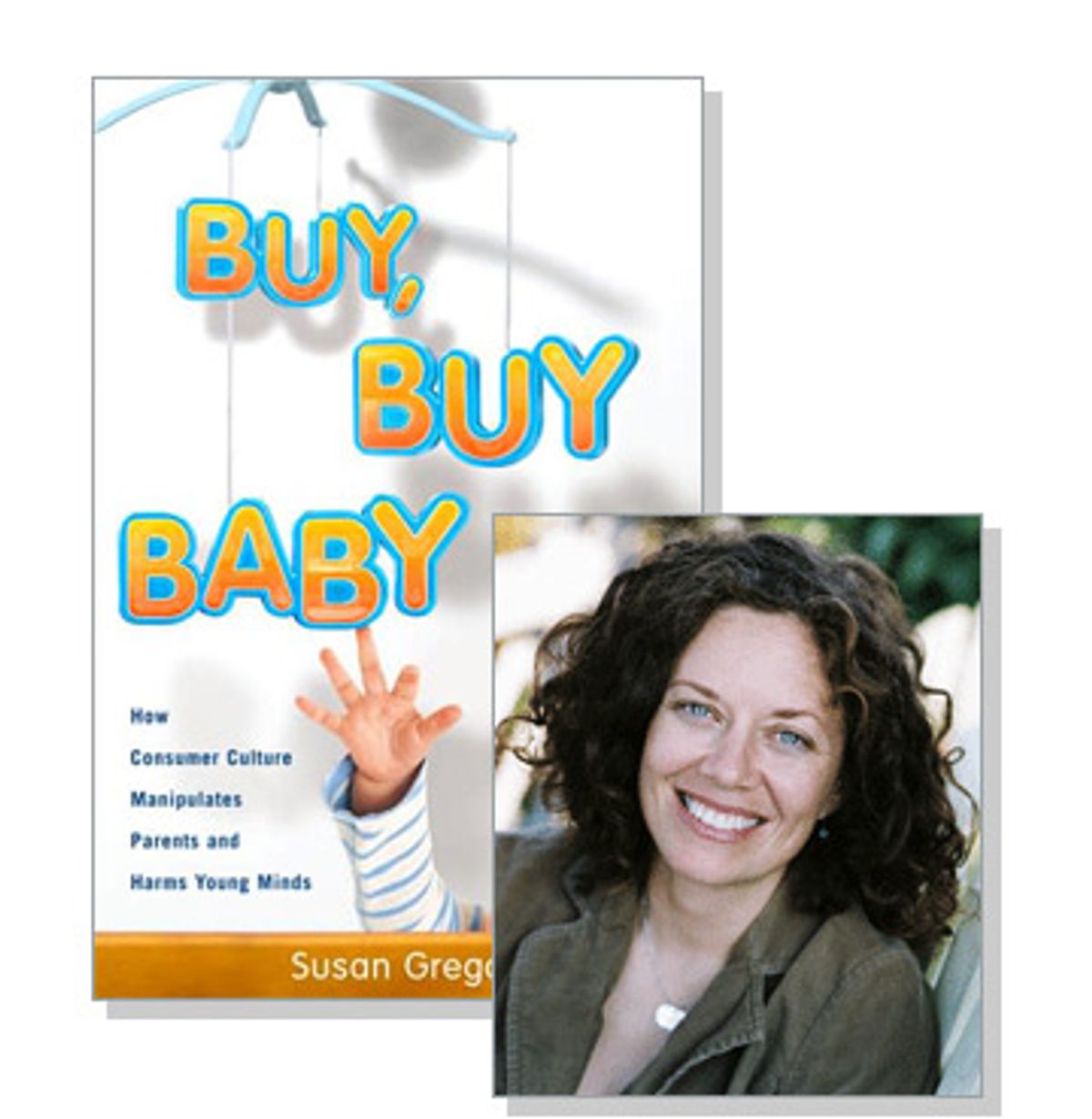 Baby Einstein videos, infant gym classes, talking toys that teach phonics: Every year more and more American parents snap up the latest kid-centric luxuries, convinced they can provide their children with a head start on everything from education to socialization. But are the secrets of good parenting really on sale at Toys "R" Us? Not according to journalist Susan Gregory Thomas. In her new book, "Buy, Buy Baby: How Consumer Culture Manipulates Parents and Harms Young Minds," Thomas contends that rather than enriching young minds, companies like Baby Einstein and Nickelodeon have become lifestyle brands for chic toddlers and have turned little ones into restless shoppers long before they understand the concept of buying. Eager marketers plaster familiar faces like Bob the Builder and Elmo on everything from books to blocks to Band-Aids in an effort to goose the bottom line. Even the train table in the Barnes & Noble children's department is a marketing ploy, placed there by the company peddling Thomas the Tank Engine toys.

Thomas is not the first to point out that much of the booming baby business -- a market she says is now worth $20 billion annually -- is a bunch of bogus hocus-pocus designed to separate parents from their cash. Last year, the child advocacy group Campaign for a Commercial-Free Childhood filed a complaint with the Federal Trade Commission alleging that the claims made by Baby Einstein's marketers amounted to false and deceptive advertising. More recently, the Education Sector, a well-respected research organization, released a report calling most so-called educational toys a crock.

But where Thomas' book excels is in her dissection of the ways in which the marketing juggernaut ultimately affects us all. Toddlers without a television in their home still recognize Elmo. Marketing firms with innocent-sounding names like the Geppetto Group specialize in pitching products to kids and teens. Even politicians such as Sen. Hillary Clinton and President Bush have fallen for aspects of the consumerist toddler zeitgeist. In fact, they might be said to bookend the business: Clinton helped launch the craze in the mid-1990s when she began citing studies on the important role the first three years of life play in child development. And Bush gave Baby Einstein the ultimate product placement, mentioning it and creator Julie Aigner-Clark in his 2007 State of the Union address.

Salon caught up with Thomas in New York, where she discussed the origins of the baby buying boom, how marketers prey on Generation X parenting practices and why -- and how -- moms and dads should fight back.

When did the "baby business" boom, as we know it today, begin?

Well, in 1994, the Carnegie Corp. published a report called "Starting Points." It was an investigation of new neurological research about how infant minds grow. It pointed out that you're never more open than you are in the first three years -- that's when you learn the foundations of physical activity, emotional security and cognitive development. The report got the attention of Hillary Clinton and actor Rob Reiner, and they put together a White House Council meeting in 1997 on the importance of the first three years. The aim was to put political pressure on Congress for federal support for early childcare. But the lasting legacy of this conference was not federal funding for early childcare. It was the "baby genius" zeitgeist.

Right around the same time as the White House conference, another, more specious study came out about what was called "the Mozart effect." It suggested that college-age kids would score marginally better on intelligence tests if they were played a certain section of a certain sonata by Mozart.

Julie Aigner-Clark, a very canny mother of a toddler, took note of that study. And she put together what we now know as the Baby Einstein empire, and Baby Mozart was the first video she developed. She based a lot of her ideas for stimulating the infant brain on this strange conflation of cultural trends: that babies were active geniuses and you really had to stimulate them adequately before they turned 3, otherwise they would never get into college, and the idea you would sort of be made smarter in math and spatial reasoning if you listened to Mozart.

But you write that there is no evidence that educational videos and the like do anything for infants and toddlers. So how do Baby Einstein and other similar companies convince parents otherwise?

Noam Chomsky said it best when he said the consumer economy takes our concerns, commodifies them and sells them back to us. If you look at the marketing rubric of, for example, Baby Einstein, what they talk about is enhancing a baby's natural curiosity. But what's so fascinating about it is that there is absolutely no research that undergirds those statements. There just isn't any. It's all marketing.

The book describes a number of companies that specialize in marketing materials to children, including Scholastic, the publisher of the beloved Harry Potter series. What is their strategy?

One of the things Scholastic started doing was to develop preschool curricula for media conglomerates. Disney, for example, is one of its biggest customers. Scholastic will develop a whole curriculum around a television show and have posters and activities and all kinds of things that preschool teachers can use. Disney pays Scholastic to develop it and offers it to the schools for free.

By and large, teachers and places are thrilled to have the free stuff. They'll hang the posters on the wall and they'll save the videos for a rainy day. It has a ripple effect because parents see that their child is watching Scholastic-approved videos in school, and they buy the idea that it must be educationally appropriate and vetted by the experts.

Many of the marketing firms you spoke with denied that they targeted their products to children under 3 -- but admitted that a lot of kids that age still watch the videos. Is that a cop-out?

It's disingenuous at the very best to say we don't test children, we don't conduct focus groups under the age of 3, or we know that they're watching in record numbers but we can't control that. But that's basically their line.

Even "Sesame Beginnings" products came under fire from a lot of commercial watchdog groups when the company came out with a DVD that said it was for 6-month-olds through adults.

It's complicated for an infant or toddler to process television. When they are put in front of the television, the only thing they seem to be getting out of it in a verifiable way is character recognition. That's why you see babies and toddlers so thrilled when they're at the supermarket and they recognize Elmo. But still, it wears what the marketing industry calls an "educational patina."

What is so awful about character recognition?

The problem is that the great social values that Elmo and the characters on "Sesame Street" teach are lost on children under the age of 3. They get solely a flat, one-dimensional character recognition. And the only other times that children are going to encounter the character are when a company is trying to sell the kid something. You don't see Elmo running around your park. You see Elmo when he's in diapers, when he's on juice boxes, when he's on Band-Aids and when he's on toothbrushes.

But toys have been around a long time. How are these things any different from Shirley Temple dolls and Davy Crockett hats?

Those were never marketed to infants and toddlers. The other difference is that parents in the '50s were much more involved with their children's consumption of media. The family gathered around to listen to the radio or watch "The Mickey Mouse Club." They were gatekeepers.

You also say that this merchandise may hold a generational appeal for today's young parents. Can you explain what you mean by that?

Generation X-ers were often latchkey kids. For example, I often came home before my mom did and turned on the television. And in the '80s, marketers -- together with television production studios -- came up with television shows that were basically commercials. You know, "Sesame Street" aired its first show in 1969 and its characters were really meant to be the village that raised American children. We have a soft spot in our hearts for these characters. So for many Generation X-ers, their happy memories of childhood are inextricably linked with consumer culture.

But a number of groups are countering those consumerist messages -- most notably the American Academy of Pediatrics, which says without apology that there should be no television for children under 2. Why aren't parents listening?

Today's parents want to be as involved with our children's lives as possible. That means more breast-feeding, attachment parenting and volunteering at the school. But everyone needs a break, and instead of just letting kids freak out or complain or whine or cry, Generation X thinks it is OK for them to spend that time in front of the television. Even the naysayers say, "I know that it's not making him into a genius, but at least I can take a shower." And this is really the first generation of parents for whom taking a shower has become a high-stakes proposition.

You have two kids. Did your research change how you parented them?

Absolutely. My daughter -- at age 3 -- came home from school talking about how certain girls at school weren't allowed to play something called the Princess Game unless they had come to school wearing a dress with the colors of a particular Disney princess. It was shocking to me that Disney had penetrated at that level. We hadn't shown her any of the Disney movies.

I said, "OK, if this is what's going on in school we'll get into it." We just did our own study of Cinderella. We went to the bookstore and the library, and it turned out that almost every culture in the world has its own Cinderella story. So we got out "Cendrillon," which was a Caribbean Cinderella story, and "Adelita," which was Mexican, and a Chinese one. Then we got the Disney Cinderella book, then we got the traditional Brothers Grimm. Then we started asking her, How come we don't see Cendrillon on Band-Aids? How come Adelita isn't on any toothbrushes? Then when we went to the grocery store, I'd ask, "Why would they put SpongeBob on that macaroni and cheese? Does SpongeBob have anything to do with that?" We began to talk about how characters are used to try to sell stuff.

Is that a conversation all parents should be having? Or is there something to be said for just leaving kids alone?

Life itself is very stimulating -- children don't need a lot of this extra stuff. Just being with your parents and getting to relax and hang out, or even just sort of sitting in the bouncy seat and watching your mom type on the keyboard as she does her work, or going to the market, or just taking a nap and cuddling, is all the stimulation a baby needs.