Steve Jobs and Bill Gates take the stage at a tech conference and come off more like old pals than business rivals. 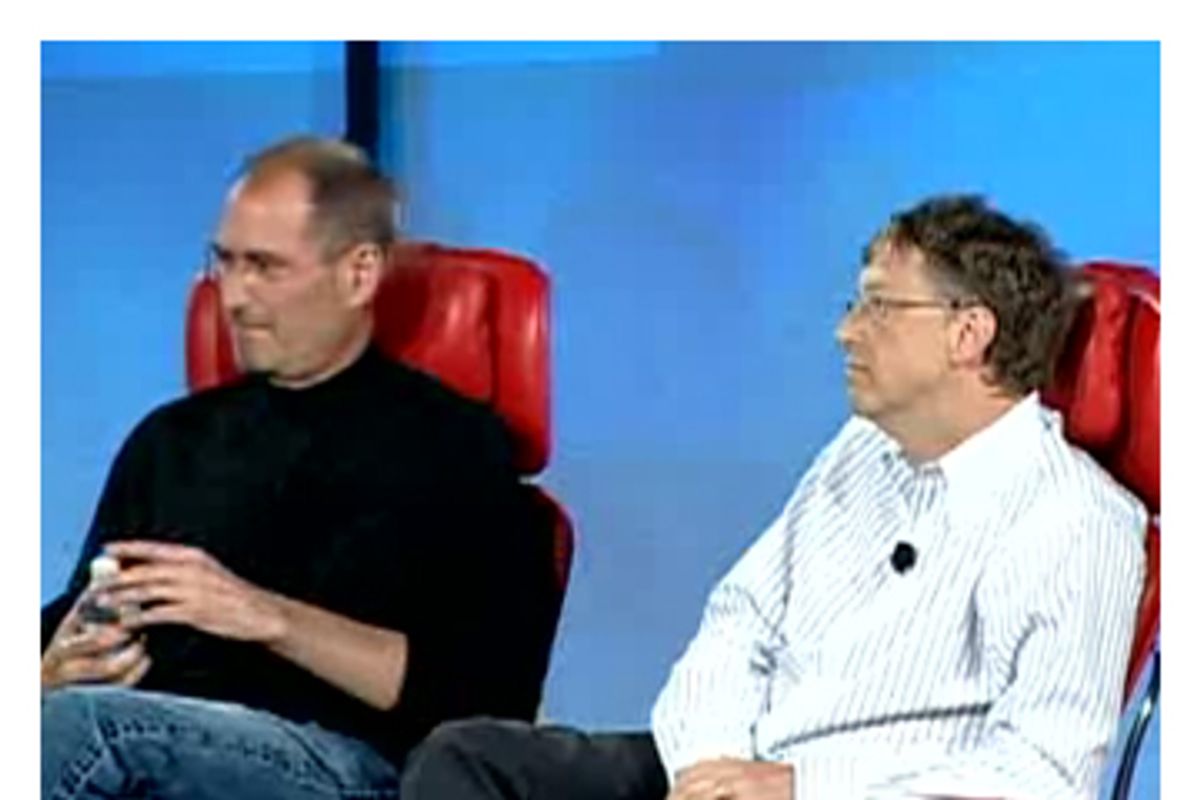 Just Wednesday afternoon, Jobs had knocked Windows software: He'd explained why Windows users love iTunes' jukebox software so much by declaring, "It's like giving a glass of ice water to somebody in hell."

But later, in the warm evening glow, Jobs dropped that familiar braggadocio and joined in the spirit that interviewers Walt Mossberg and Kara Swisher set, of thoughtful reminiscence and mutual appraisal. On those terms, the event was a fascinating bout of PC-industry psychoanalysis.

Many others blogged the event live (Engadget, the D5 blog, Dan Farber, Paul Kedrosky, Eric Savitz and more), so let me instead offer some impressions based on the unusual opportunity to observe these two industry pioneers side by side.

Gates has always tended to let his words wander into thickets of technical minutiae, but the trait only showed itself in deeper relief next to Jobs' ability to cut quickly and cleanly to the heart of an anecdote. As Gates began to fumble through some digressive detail in telling the tale of how Microsoft's floating-point BASIC ended up on the Apple II, Jobs watched impatiently, then finally broke in -- "Let me tell the story!" -- and provided the key bit of human color. For reasons nobody ever figured out, Jobs explained, Steve Wozniak had written, by hand, on paper, "a BASIC that's like the best BASIC on the planet, it's perfect in every way," except it did only fixed-point math. So Apple bought Gates' floating-point version for $31,000 -- and got the Microsoft code on a cassette.

Jobs is also faster with a joke than his old rival is. When Swisher asked them to describe "the greatest misunderstanding about your relationship and about each other," Jobs deadpanned, "We've kept our marriage secret for over a decade." Gates froze for a painfully long silence before mumbling something about how "it's been fun to work together" and "I kind of miss some of the people who aren't around anymore."

The two men reviewed their industry's and their own ups and downs (more downs for Jobs than for Gates), from the Apple II days to the rise of the Macintosh (from the start, Microsoft was an essential provider of Mac application software) to Apple's dark era in the mid-'90s as Windows rose to its hegemony to Jobs' triumphal return and revitalization of the company, including a rapprochement with its Microsoft foe. Jobs said he realized that "if the game was a zero-sum game, then Apple was going to lose -- but a lot of people's heads were still in that place, at Apple and in the customer base ... It was clear, you didn't have to play that game. Apple didn't have to beat Microsoft -- Apple had to remember who Apple was."

Jobs credited Gates with the "high-order bit" insight of, essentially, inventing the software business: "Bill built the first software company in the industry -- before anybody really in our industry knew what a software company was. And that was huge."

Which means, in a way, that even though Jobs has explicitly rejected the old Apple vs. Microsoft trope, and admits he has no expectation of seizing huge chunks of the PC market, he is placing his company in exactly the same market as Gates'.

When Mossberg tossed the two a question about the rise of Web-based software services, pointing out that both Apple and Microsoft are tied to the old "rich-client" model of personal computing, Jobs jokingly interjected that he was calling both of them "dinosaurs." While no one would suggest that either hugely successful company risks extinction, there was certainly a valedictory quality to the event, beginning with the walk-down-memory-lane video intros (with a remarkable 1983 Apple marketing clip of a "Dating Game" takeoff, featuring Jobs quizzing Mitch Kapor, Fred Gibbons and an impossibly callow-looking Gates), all the way to the standing ovation at the end.

"When Bill and I first met each other and worked together in the early days, we were the youngest guys in the room," Jobs said. "Now, I'm the oldest guy in the room most of the time. That's why I love being here." (D attendees' average age, weighted by various media moguls and billionaire CEOs in attendance, is somewhat higher than at those tech conferences focusing on small start-ups or new industries.)

Jobs continued, "I think of most things in life as either a Bob Dylan or Beatles song. There's that Beatles song that goes, 'You and I have memories, longer than the road that stretches out ahead,' and that's clearly true here."

Not only was it a deft reference to the title of Gates' decade-old book of prophecy; in an industry that keeps its eyes firmly averted from its own history and toward the promise of a golden future, it was a rare, touching and honest admission that, for both men, the past may be fuller than the future.

Jobs was, mostly, gracious. Yet the pursed-lip smile he wore through so much of the talk gave him the unmistakable look of someone who views himself as just a wee bit superior. Gates, oddly, came off as the more sympathetic of the two, despite his technical maundering and awkwardness -- or maybe because of their humanizing frailty. (Similarly, Swisher and Mossberg agreed that in Apple's current ad campaign pitting the frumpy "PC Guy" against the hipster "Mac Guy," John Hodgman's PC Guy is more likable.)

Gates was forthright in admitting, "I'd give a lot to have Steve's taste. We sat in on Mac product reviews, where there were questions, [and] I'd see Steve make the decision based on a sense of people and product that's hard for me to explain. It's magical."

At one point, discussing the thrill of trying to figure out just what features to pack into the new generation of mobile devices, like Apple's much-ballyhooed iPhone, Jobs said, "People are inventing things constantly. The art of it is deciding what's on and what's not on there -- the editing function."

"The editing function"! More than his quickness with a riposte or his "reality-distortion field" self-confidence, that is Jobs' edge. A decade ago, I wrote about Jobs as "the last of the personal-computer auteurs -- the only person left in the industry with the clout, the chutzpah and the recklessness to build a computer that has unique personality and quirks." Gates won a bigger PC market and more billions, but Jobs still puts his mark on products in ways no one else in the tech industry can match.