As administration lawyers scramble to find a new legal underpinning for "tough" interrogation techniques, the Senate Intelligence Committee slams a once-secret CIA program and its methods. 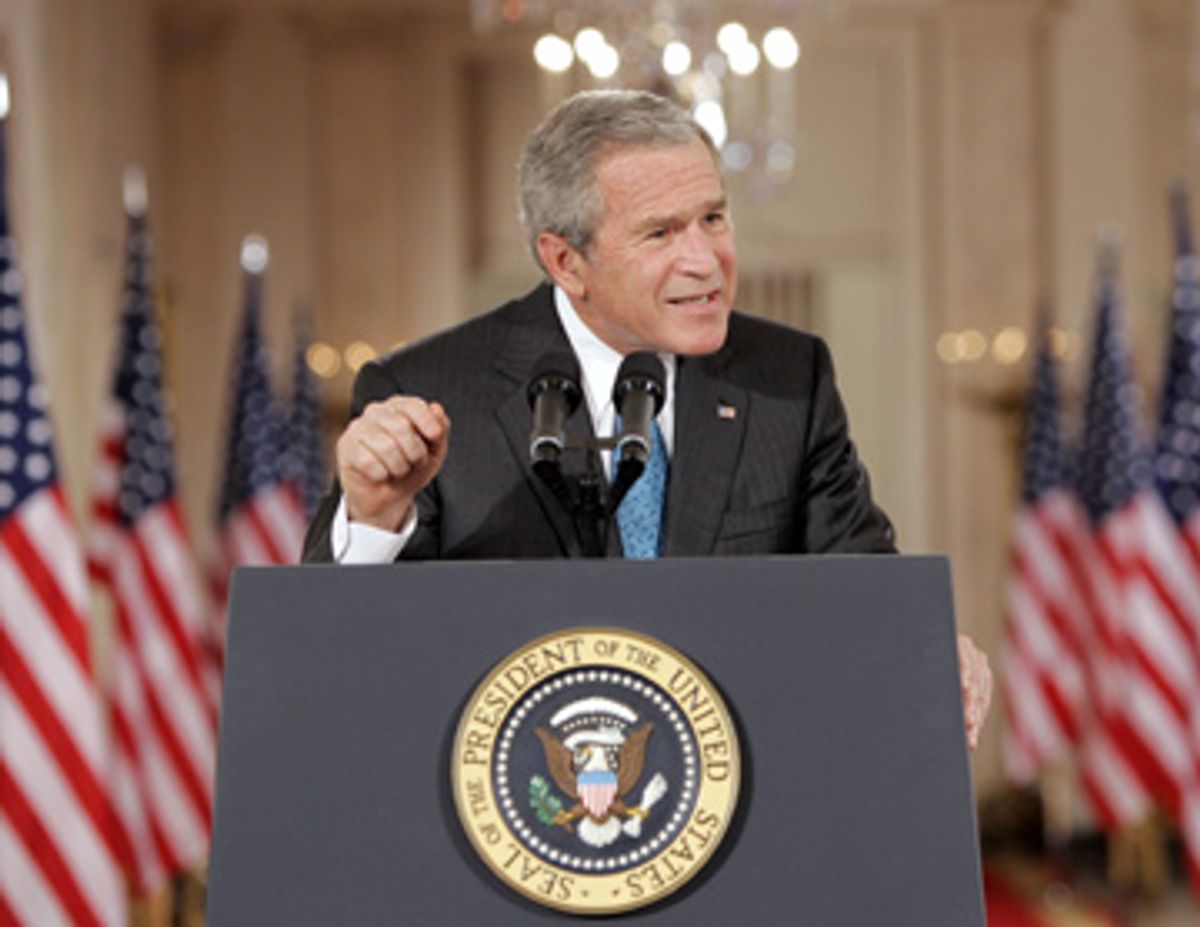 The Senate Intelligence Committee has signaled to the White House that an infamously abusive secret CIA program to interrogate high-level al-Qaida types may have to be scrapped, given "the damage the program does to the image of the United States abroad." It is a stinging rejection of a program that President Bush late last year called "one of the most successful intelligence efforts in American history" and comes as administration lawyers are reportedly crafting new, secret rules to govern it.

The rebuke to the White House was delivered in written comments that were passed by the committee last week and released Thursday to accompany the annual bill authorizing intelligence activities. Military intelligence experts and human rights advocates have already slammed the abusive techniques purportedly employed by the CIA -- sleep deprivation, stress positions, slapping, induced hypothermia and simulated drowning, or "waterboarding" -- for producing unreliable intelligence from subjects who will say anything to make the pain stop. Now the senators on the intelligence panel, which has direct oversight over the CIA, seem to agree, according to the testy language passed last week. "The Committee believes," wrote the senators, "that consideration should be given to whether it is the best means to obtain a full and reliable intelligence debriefing of a detainee."

This skeptical view comes months after Bush endorsed the "tough" techniques as particularly effective in a Sept. 6 White House press conference, during which he also revealed the existence of the previously secret CIA program. And the Intelligence Committee said in these new comments that the skepticism might have come much earlier, if only the White House hadn't kept all the panel members except the chair and the ranking minority member in the dark for the past five years. "The administration's decision to withhold the program's existence from the full committee membership for five years was unfortunate in that it unnecessarily hindered congressional oversight of the program."

The committee also dumped cold water on the White House argument that the CIA should operate under separate, special rules that would allow tougher interrogation methods that are clearly off limits to the military. (The same day that Bush announced the existence of the CIA program, Pentagon officials held their own press conference to disavow coercive interrogations and announced the release of a revised interrogation manual tailor-fitted to the Geneva Conventions.) The intelligence panel's statement frowns on any special arrangement to allow the CIA to use what Bush has referred to euphemistically as "an alternative set of procedures."

"Both Congress and the administration," wrote the panel, "must continue to evaluate whether having a separate CIA detention program that operates under different interrogation rules than those applicable to military and law enforcement officers is necessary, lawful, and in the best interests of the United States."

The stiff message from the Intelligence Committee was passed in a voice vote on an amendment offered by the chairman, Sen. John D. Rockefeller, D-W.V., but members of both parties told Salon it reflected a bipartisan consensus. "While the language in the provision is a bit stronger than I would have preferred," said Sen. Kit Bond, R-Mo., vice chairman of the committee, in a statement to Salon, "I am in agreement with the broad concerns it lays out." Explained a committee aide, "It lays out some concerns that the committee has ... It says that the committee is not sure that this program is the way to go as we move forward." Though the message does include the concession that "individuals detained in the program have provided valuable information that has led to the identification of terrorists and the disruption of terror plots," that bipartisan meeting of the minds makes this language a solid shot across the White House's bow.

The sharp retort couldn't come at a worse time for the White House. Administration lawyers are reported to be hard at work at new rules to govern the CIA interrogation program. The rules have been seen as an effort to burrow a hole in the Military Commissions Act passed by Congress late last year, which would seem to bar abusive interrogations outright. That law also requires the Bush administration to publish an executive order providing some legal rationale for the continuation of the CIA's interrogation program. But the executive order has long been delayed, reportedly as the administration struggles to draft a rationale that would allow the CIA to go further than the military when questioning so-called high-value detainees.

Meanwhile, the status of the CIA's secret interrogation program remains unclear. President Bush said that the network of secret prisons used for interrogations was empty when he unveiled the program late last year. But then on April 27, the Pentagon announced that Abd al-Hadi al-Iraqi, a former top advisor to Osama bin Laden, had arrived at the military prison at Guantánamo Bay, Cuba. He had been in CIA custody for months, but the agency had declined to alert the International Committee of the Red Cross of his detention. His treatment at the hands of the CIA during that period is unknown.