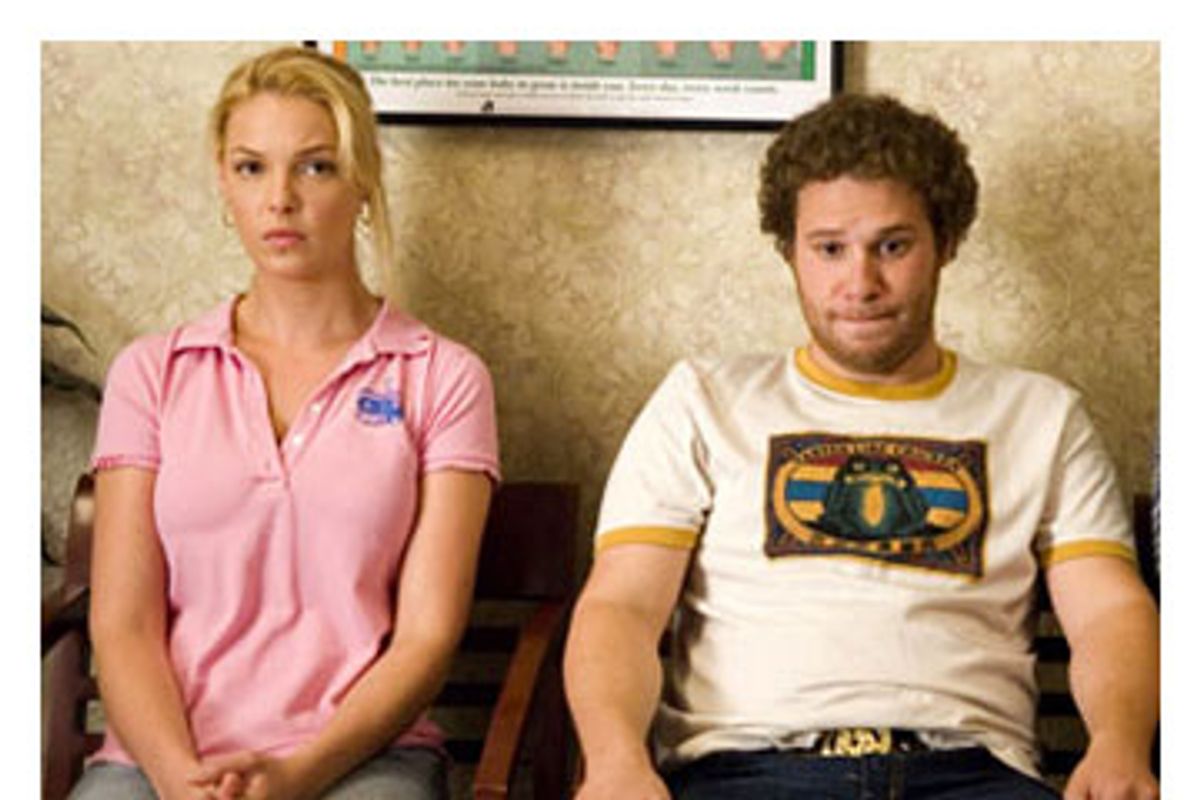 Great comedies work on us the way great dramas do: They burrow deep inside, planting timed-release capsules of mood and feeling that may self-activate hours, or even days, later. Writer-director Judd Apatow's "Knocked Up" is that kind of comedy, hilarious from moment to moment, but leaving behind both a warm glow and a sting. This is a picture that refuses to fetishize either the ability to conceive or the significance of our place in the universe once we've done so.

There's no self-congratulatory blather about parenthood as a higher calling: Apatow -- whose sweet-natured directorial debut, "The 40 Year Old Virgin," became a surprise hit summer before last -- suggests that good parenting, with all the flexibility and emotional commitment it demands, is as draining as it is enriching. There are no cutesy poo-poo diaper jokes here, no insider winking and nudging about how crazy-making our adorable little buggers are, and, best of all, no starry-eyed mooning over the way they bring innocence back into adult lives. I don't know whether to laugh or cry when I think of the moment in "Knocked Up" when Paul Rudd, as the semi-happily married parent of two supercute but hell-raising little girls, muses about how excited they get over simple stuff like blowing bubbles. His delight in their delight gives way to a purely adult brand of melancholy when he says, with comically exaggerated moroseness, "Their smiling faces just point out your inability to enjoy anything."

"Knocked Up" isn't just for parents, or for prospective parents: It's for any of us who have ever had to rise to an occasion, only to become paralyzed by fear that we're going to come up short -- which should cover just about everybody. It certainly applies to Ben (Seth Rogen) and Alison (Katherine Heigl) who, after a drunken one-night stand, discover they've inadvertently made a baby together. Alison is just getting her big break at the E! channel, where she works: Her boss (a slippery-smirky Alan Tudyk, of the late, great "Firefly") has given her the opportunity to be an on-camera interviewer. Ben is a tubby slacker whose four roommates (Jason Segel, Jay Baruchel, Jonah Hill and Martin Starr, each of whom gets the chance to be alternately aggravating and endearing) are also his business partners: They're working on -- although "inching toward" might be the better term -- a Web site that will inform users how far they have to wade into a specific movie to get to the naked girlie parts.

Neither Ben nor Alison is ready to become a parent, and their fears are only reinforced when they start examining the lives of Alison's sister, Debbie (Leslie Mann), and her husband, Pete (Rudd), whose marriage is visibly strained, partly -- though not wholly -- by the demands of parenthood. (Their two little girls are played by Iris and Maude Apatow, the real-life daughters of the director and Mann, who are married.) But for reasons that aren't, and don't need to be, spelled out, Alison decides to go ahead with the pregnancy. Ben, reluctantly, agrees to do his part -- except he has absolutely no idea what his part should be.

It's clear that Apatow doesn't intend "Knocked Up" as a right-to-life tract, and I hope it won't be celebrated -- or decried -- as such. The movie is simply delicate-handed enough to know that neither it nor the Supreme Court can dictate what a woman's choice should be. And it's intuitive enough to know that such a complicated choice can't be easily explained -- at least in terms that will satisfy anyone's politics. At one point Alison and Debbie's well-intentioned mother (played by Joanna Kerns) reminds Alison how a friend of the family became pregnant out of wedlock, had an abortion and then later went on to have "a real baby" -- a pointed reminder that even when we're faced with the most intensely personal of decisions, there's always going to be someone arrogant enough to think he or she knows what's best for us.

Still, in an age in which more and more couples wait until their mid-30s, or later, to have children, the mere idea of a woman in her 20s facing an unplanned pregnancy is something of a novelty. Newsstands carry magazines with weird titles like Conceive (whose motto is "Celebrating the Creation of Families") and Plum ("The First-Ever Pregnancy Magazine for Women 35 Years and Over"). When conception is harder to achieve, a fertilized egg becomes not the first tentative promise of a human being, but the Holy Grail, a reliquary for our awe and reverence, even when it grows up to be an overtired toddler having a temper tantrum in a supermarket. In the bizarro universe of white affluence, unplanned pregnancies are what happen to "other" people -- this isn't like the old days, when babies, both the planned and the surprise kind, just came along and you somehow dealt with them.

And so Apatow uses an unplanned pregnancy -- a jarring event that's also, perhaps paradoxically, one of the most natural things in the world -- as a device to explore parenthood and the nature of long-term partnership. "Knocked Up" isn't at all precious about either: At first, Alison isn't even so sure she likes Ben. And when she invites him to dinner to break the news (they haven't seen each other since the awful morning after that fateful night), he reacts just like the immature stoner bonehead she believes he is. "I assumed you were wearing a patch -- or a dental dam," he sputters, cruelly suggesting that after all, it's the woman's responsibility to take care of such things. He doesn't even have to know the right words for them.

But Ben is at heart a sweet guy, and he and Alison tentatively move toward common ground, making the kind of connection that could turn into love. They also fight, in ways that bring out the worst in each of them: Alison is impatient, demanding and judgmental; Ben is a little boy who's reluctant to grow up. The male-female arguments in "Knocked Up" are sometimes so vicious, so indicative of suppressed toxicity, that they're painful to watch. At one point Debbie advises Alison on how to gain the upper hand with a partner: "You criticize them a lot until they get so down on themselves they're forced to change." Her pert, cheerful certainty on this matter is what makes the line so funny, and also so horrifying. Pete has his own way of dealing with marital pressures. He's keeping a relatively benign secret from Debbie, and when she discovers it, she lashes out at him -- and the ensuing confrontation makes you feel horrible for both of them. Apatow has no compunction about going for uncomfortable laughs, as well as breezy ones.

This is a romantic comedy that's unafraid to face human suffering dead on. And yet, in the end, it's all the more joyous for that. "Knocked Up" is a beautifully shaped piece of work: There are no slack patches, no gratuitous feel-good moments -- if you walk out of "Knocked Up" feeling good, that means you've earned it. Over the years, as both a producer and a director, Apatow (who also created the much-loved TV comedies "Freaks and Geeks" and "Undeclared") has assembled a crew of favorite actors. He's cast many of them in this picture; it's clear how attuned they are to his sensibility: Rogen is an unlikely romantic-comedy lead whose charms sneak up on you gradually but persistently. Heigl is wonderful here: She gives Alison just the right mix of youthful vulnerability and fierce, mom-to-be determination. Heigl can pack a world of conflicted feelings into a single, brief take: At one point we see her exasperation at Ben's being an immature jerk segue into a realization that sometimes even an immature jerk can be a lot of fun. Just as Alison nudges Ben toward recognizing that there's more to life than just horsing around with his buddies, he frees her from the constraints of being too responsible.

Rudd is one of those rare comic actors who can give even abject silliness a surprising amount of gravity. And Mann, an underappreciated comic talent (she was marvelous as the ditzy heiress in the otherwise unmemorable "George of the Jungle"), finally gets the screen time she deserves. Her timing is always crystal-sharp; her motor purrs along on a seemingly endless supply of nervous energy. Even with that tumble of blond curls, that translucent skin, there's nothing angelic about Mann -- or, at least, she's an angel with angles.

"Knocked Up" is the kind of movie that gives even the players in very tiny roles -- like Charlyne Yi as a stoner-slacker girlfriend, and the unnervingly brilliant Kristen Wiig, of "Saturday Night Live," as a passive-aggressive network lackey -- a chance to shine. There's a generous spirit at work here, even amid all these intelligent, finely honed jokes. A cranky, dictatorial gynecologist turns out to be perfectly decent and kind; a nightclub doorman waxes poetic about the ugly decisions he has to make in order to do his job. There are also many moments of inspired ridiculousness: When Alison sees an OB-GYN Debbie has recommended, the guy takes a peek between Alison's legs, and announces far too cheerily, "Well -- you do look a lot like your sister!"

"Knocked Up" doesn't trade in easy platitudes about the joys of parenting: When Alison and Ben venture out to that first OB-GYN appointment, Apatow's camera shows us the weirdest-looking babies, not the most instantly adorable ones. This is, after all, a movie about facing your worst fears, and recognizing that even when we take a chance on love, happiness is never guaranteed. That uncertainty is what links it to the great American romantic comedies: It's not as elegant as, say, "Holiday" or "The Lady Eve" or "The Palm Beach Story," but it's wise enough to know that the false promise of happily ever after is more depressing than it is uplifting. Better to acknowledge the bumpiness of the road ahead than to fool yourself into believing you can iron out its kinks.

Even so, "Knocked Up" is shot through with rays of optimism, suggesting how we can put our bewilderment and confusion to work and learn how to be better, more compassionate grown-ups. The characters in "Knocked Up" get a shot at becoming their best selves -- by the seat of their pants, but if there's hope for them, there's hope for the rest of us, too. To err is human, to forgive, divine. And sometimes the biggest leap begins with a single, half-assed baby step.