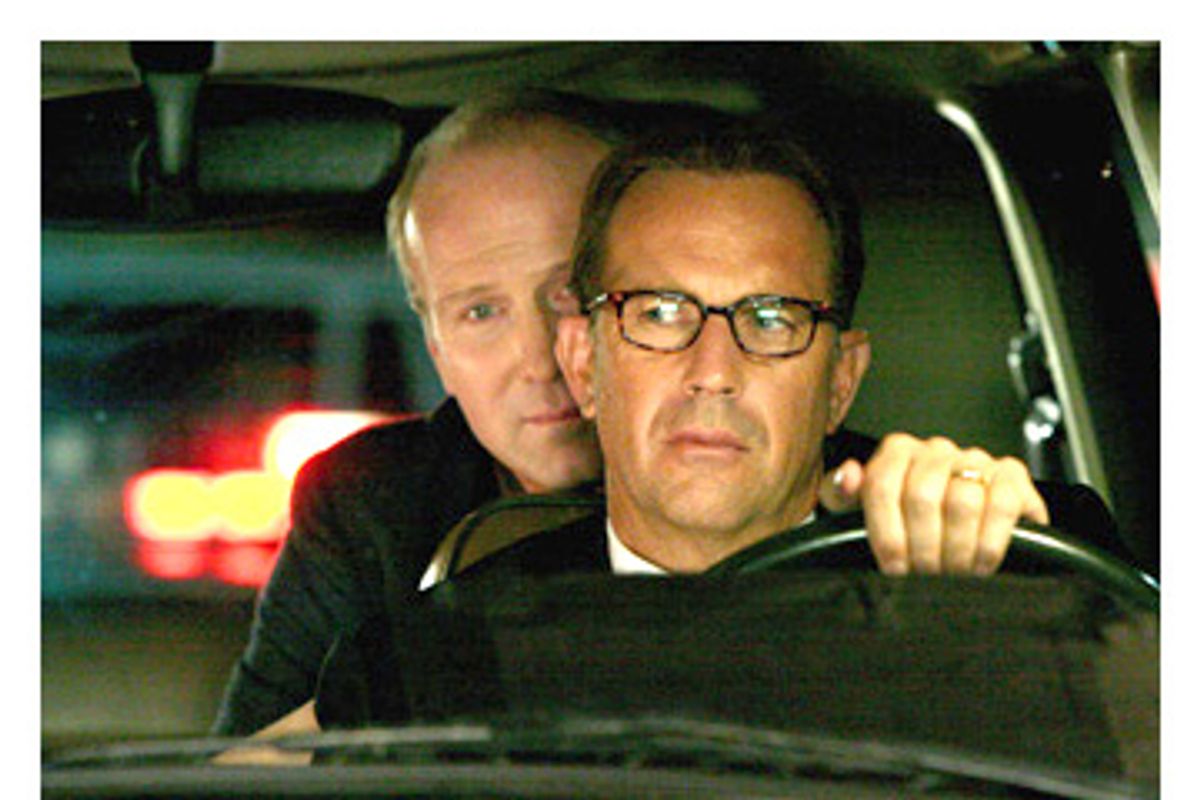 Meet Mr. Brooks: captain of industry. Amateur ceramicist. Serial killer. In Bruce A. Evans' sloppily misbuttoned thriller "Mr. Brooks," Kevin Costner plays Earl Brooks, a Northwestern packaging magnate, family man and upstanding citizen who happens to have a taste for meticulously executed murders. He's known as the Thumbprint Killer (he always finds a way to attractively showcase his victims' prints in blood at the crime scene) and he takes his orders from an inner voice that only he -- and we -- can hear, like an evil Harvey. We can see as well as hear this malevolent giant imp, who is played by William Hurt and who, for no explicable reason, goes by the name of Marshall. "I like being alive," he tells Earl quite plainly. "I like eating, I like fucking, and I like killing." He doesn't mention long walks on the beach, but we can assume he likes those, too.

Beneath its drab veil of self-seriousness, "Mr. Brooks" is nothing but just plain silly. Evans cowrote the script with Raynold Gideon (the two also collaborated on the screenplay for the 1986 Stephen King adaptation "Stand By Me"), and although the movie strives for chilly sleekness, it makes so many inadvertent goofball turns that it's hard not to giggle at it. When Earl, itching to carry out his naughty nocturnal deeds, needs to excuse himself from the bed he shares with his wife (Marg Helgenberger), he tells her he's headed to his studio to "play with some glazes." Now if that's not a believable cover, what is? But Earl's perfectly laid plans hit a snag when an eager serial-killer-wannabe, played by Dane Cook, blackmails him into showing him the ropes: He wants to be Mr. Brooks' Mini-Me. Meanwhile, brainy detective Demi Moore tracks the Thumbprint Killer ruthlessly, even as she's being trailed by another serial killer (Matt Schulze) whom she put behind bars earlier. He's escaped from prison, and although every cop in town is after him, he has no trouble finding run-down boarding houses to hang out in.

"Mr. Brooks" needs all that convoluted cat-and-mouse business to distract us from its aggressively dumb plot. Costner seems to be having some fun playing the respectable guy with an evil secret, but Evans' murky storytelling just weighs him down. Cook has all the charisma of a misshapen mud pie, although, sadly, even this schlep of a performance is probably an improvement on his stand-up routine. Only Moore is unsinkable: Strutting through her scenes in a series of sharply creased trouser suits, she gives the movie its few flashes of pizzazz. She takes the picture about as seriously as it deserves to be taken, which is not at all, but at least she attempts to jolt it to life. She's ridiculously believable even when she's explaining to a colleague that the persnickety Thumbprint Killer would never choose a victim who didn't have a vacuum cleaner in the house. Mr. Brooks, you see, likes to clean up after himself. He clearly has no idea that the movie he's living in is a godawful mess.