Berkeley Breathed, Salon's new Sunday cartoonist, tells us why he'd kiss Cheney if he could, why satirists can't touch Bush, and why his new children's book was flayed by the p.c. police. 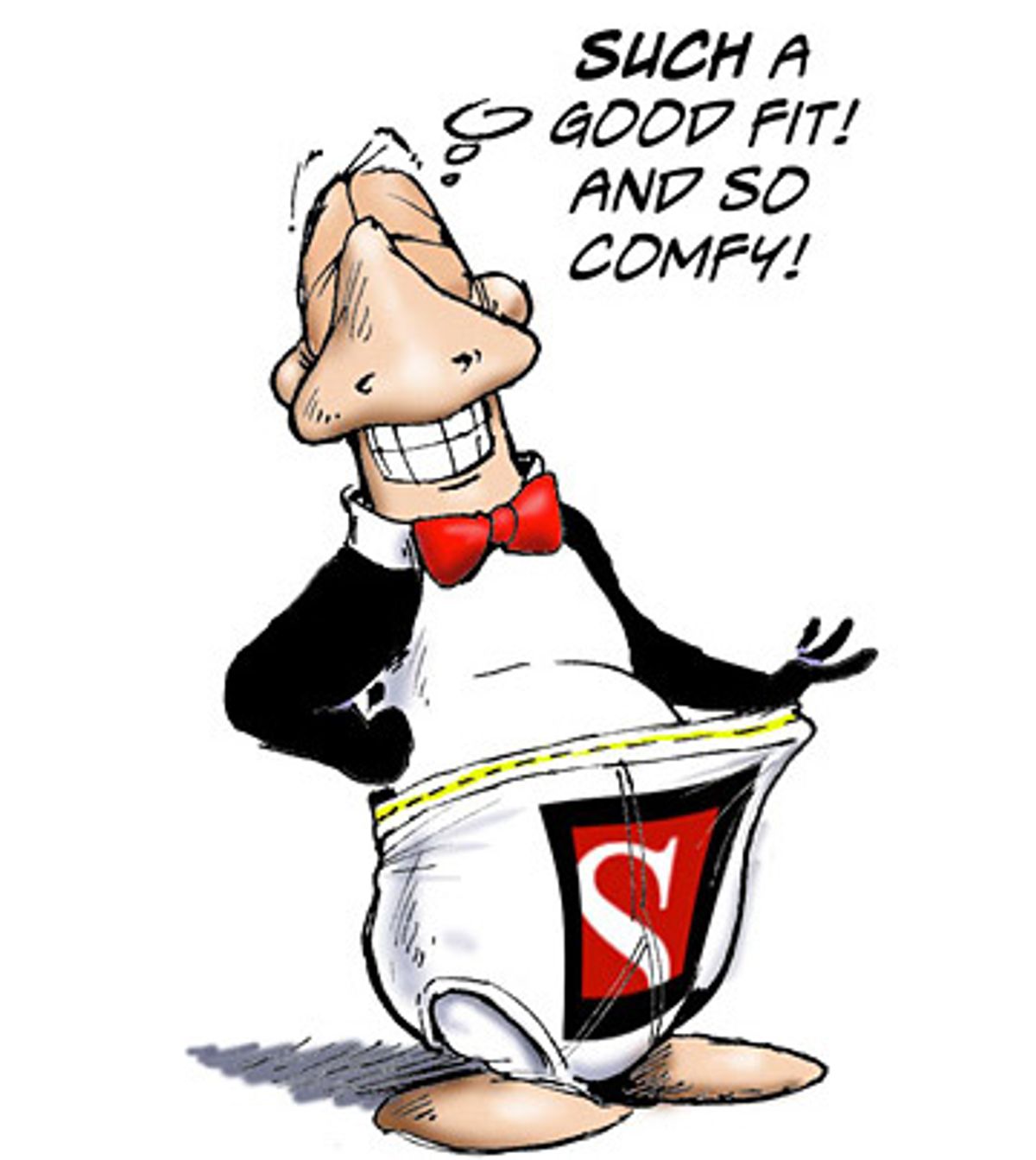 It's been almost 18 years since "Bloom County" ended, but Berkeley Breathed is still cartooning full speed ahead. He made his name with that Pulitzer Prize-winning 1980-89 daily comic strip; since then, he's left and returned to the comics page twice (first with "Outland," more recently with "Opus"), sticking to full-color Sunday strips that give his artwork more room to stretch. Breathed has also branched out into other media -- especially children's books, beginning with "A Wish for Wings That Work" in 1991. His latest book for kids, "Mars Needs Moms!"

unveils his new all-digital art style. It's the story of young Milo, who shares his name not only with a "Bloom County" character but with Breathed's own son. Milo doesn't see what's so special about his tyrannical, vegetable-obsessed mother until she's kidnapped by Martians; he follows them to Mars, where he discovers not only how useful a mother can be, but that his own mom is willing to sacrifice more for him than he'd ever realized.

In an e-mail conversation, Breathed discussed the hot buttons that "Mars Needs Moms!" has pushed with audiences and reviewers, as well as the state of some of his other projects and the frustrations of dealing with George W. Bush in satire.

The last time Salon interviewed you, in 2003, you said that your goal with "Opus" was "simply to have some fun." How's that been going for you? What are the fun parts of doing the strip?

Drawing Dick Cheney with a marsupial on his head, denying that it's there and blaming it on the left-wing media. What could be more fun than that?

You've recently floated the possibility of ending "Opus" and killing off the character. I realize this isn't the most appropriate figure of speech, but is the penguin an albatross for you? Does the persistence of the characters you've been following for decades make it easier or harder for you to do an ongoing comic strip?

I wouldn't be in the comic pages if not for Opus. The spiritual and comedic heart of a comic strip doesn't always appear, and you can't will one into being. A good comic strip character is born midwifed by serendipity, not design.

I was kidding about killing Opus, by the way. I'd like to walk the streets free from fears of spontaneous garroting.

What's going on with the "Opus" movie?

Good segue! He's dead. A stake through his promising cinematic heart, after five years of active development at Miramax. Animation isn't a game for the timid. There'll only be a movie if I'm writing it, which will probably keep him off the big expensive screen ... probably just as well.

You've mentioned that you've got a novel in progress. What kind of novel is it?

Everybody has a novel in progress. I hate to be left out of these trends. I have an idea that could not -- despite herculean efforts -- be squeezed into the 40 pages of a picture book. And once I train myself to write a page of text without immediately running off to paint the action, like a monkey reflexively jumping to an organ grinder, I shall begin.

Years ago, you declared that George W. Bush had "cut off our satirist balls" by being unwilling to take himself seriously, but "Opus" features some of the most vehement political satire you've ever written. What do you think is the job of a satirist at a political moment like this one?

Cartoonists -- any satirists -- are mere blowhards at the fringes of the mob, screaming at the crowd to throw the gasoline bombs at the storm troopers. Nobody pays attention to us, really, but we look amusing with our veins popping out. I think it builds confidence for the stragglers in the back.

Bush has given us a gift: far from not taking himself seriously, he's become the only human being on the planet that thinks he's not just uniquely competent ... but brilliant in his strategic, heavenly inspired prescience as to how the world works. This hilarious -- also arguably homicidal -- self-deception is what makes him a comical figure. Literally, it's as if -- I mean this with the utmost respect for both the office and the man -- my 5-year-old boy Milo was running the free world. Milo believes himself equally as shrewd in spotting who the bad guys are in any movie and declaring the complex strategy to deal with them: "Blast 'em all!"

But there's bad news for satirists. Bush has come full circle: His ridiculousness is approaching the sort of existential absurdity that is untouchable. Watch him try to string a sensible sentence together now. Anywhere. He's become one of those guys with the Marx Brothers in "A Night at the Opera" who tumble through the door in the stateroom scene. I can't make him funnier than when he's trying to explain himself in a town hall meeting. Any day now he will go with "I'm the decisioner" and we satirists will know that our balls have been cut off entirely by a very shrewd adversary. Reagan did this too by becoming senile.

Dick Cheney is a different matter. I'd kiss him if I could.

"Mars Needs Moms!" features your first fully digital "painted" artwork, and the color images have what looks like a lot of 3-D digital modeling in them -- they have a very specific "2007" look about them, in a way that the black-and-white line drawings on other pages don't. (And some of the characters and sets seem to have a hint of old Chuck Jones cartoons in their design.) How did you decide on your visual technique and style for this book?

This story popped forth in my mental scrapbook looking like a film ... which admittedly is my first love. I painted it as stills from a movie, which it's actually becoming. Watercolor and color pencils usually rule the realm of children's illustrations. The book I'm working on now will be drawn more conventionally. You still can't beat the weird verisimilitude of an elegantly drawn rough pencil line, though.

What were the picture books you liked best when you were a kid? Are your favorites different now that you've had two children of your own to read to?

To be honest, beyond the charms of Seuss' cartoons, children's books in the '60s weren't a depository of inspirational artwork. They had their charms ... but they rarely offered rich, graphic worlds that transported imaginations. Painters such as N.C. Wyeth would never have considered illustrating anything but adult novels. I wish he had. It took stumbling on a Chris Van Allsburg book when I was doing "Bloom County" in 1985 for the possibilities to occur to me. And indeed, this was when publishers discovered that the real way to sell lots of picture books ... was to make them just as captivating to look at for adults as children. This is revolutionary. It's the world that I could fit into.

What has having children taught you about creating a book that can worm its way into a 4-year-old's mind and heart?

A recent, instructive exchange with my son while reading the beta version of "Mars Needs Moms!" some months ago:

Me: "Then Milo pulled on his slippers and ran after the departing spaceship that held his captive mother..."

Me: He's got them shoved down his jammies. He'll put them on soon. Listen, the Martians have his mother. That's the important thing, right?

My son: Are the slippers in his butt crack?

Lesson learned: If you write it, draw it. They should give me the Caldecott Medal just for embracing at least this bit of kid-lit orthodoxy.

"Mars Needs Moms!" is about the idea that parents love their children so much they'd die for them -- and that children don't often realize that. Do you think young kids might pick up that message from the book, or is it more meant to strike an emotional chord with the parents who read it to them?

Both. And it does, from the comments I get. Read the readers' reviews for the book at Amazon. The idea was to illustrate for a child that their perspective on their parents might have more than one dimension. Some kids get this intuitively. Others could use some illumination. But interestingly, adults are reviewing their own mothers -- or parents -- through the prism of the story ... and this is when they get emotional. For me, it didn't occur to me that my mother showed much love through sacrifice until I took a closer look at her life. Her style wasn't that of day-to-day hands-on affection. But she delayed ending a deeply unhappy marriage for at least 1- years until my sister and I were nearly adults. Ten years of frustration and depression was the foul Martian air she had to breathe after giving us the last space helmet. Oh, heck, that's probably what was in my mind when I wrote the story. I didn't marry a psychologist for nothing.

You've mentioned that "Mars Needs Moms!" has run into trouble with "the daunting p.c. police of children's literature." What's the issue with it?

It's 1) the domestic depiction of moms and the domestic fantasy that the Martians are obsessed with: getting driven to soccer. Making their lunches. Being entertained. I got dinged by the kid-lit p.c. police for failing to mention a professional job for mom. Big no-no. This is very funny. As if working at Kmart -- or as the CFO for Intel -- means a damned thing to a 5-year-old. Bandaging her boo-boo does.

And 2) depicting moms as (domestic) self-sacrifice machines. This, in the kid-lit orthodoxy, provides reasons for women to feel guilty about the career choices they might make (and the sacrifice/guilt issues regarding children). Both of these nailed me in Publishers Weekly's eyes. It was a deliciously scathing review, the most important in publishing ... I can say "delicious" with a buoyant, flippant air because the book is a bestseller. I'm quite positive, by the way, that my Publishers Weekly reviewer was a woman whose own mother made her sit and eat broccoli until she wet her pants.

How has the world of children's books changed in the 16 years since "A Wish for Wings That Work"?

The fucking -- excuse me -- celebrities have invaded our turf and don't plan to leave. Everyone -- and I mean everyone -- who has a household name is lined up and booked on the "Today" show to promote their children's book. I happen to know that Saddam Hussein had been approached before the noose tightened. Too bad they couldn't have hung Madonna before she had a chance to dump her 10 million books all over the shelves. For crying out loud, Barney, the presidential dog, did a children's book. It was a bestseller, goddammit. I'm going to show up at the White House and suggest that it's my professional right to take a poop in Barney's doghouse. See how he likes that. I'm not bitter.

One theme of your work seems to be longing for respect -- a lot of Opus' story is about his uphill battle for dignity, and in "Mars Needs Moms!" Milo starts out frustrated at his "thundering, humorless tyrant" of a mother's lack of respect for him, and ends up respecting her more. Do you feel like you've gotten the respect that's due to you?

Now that you've brought it up, no. My mother still calls me "Berke" and not "Berkeley," even after I explained to her that a "berk" is common, working-class English slang for -- I'll put this gently -- a vagina. I'd like her to stop this. Mom, I hope you subscribe to Salon.