Little-noticed details in declassified U.S. documents indicate that Israel's Six-Day War may not have been a war of necessity. 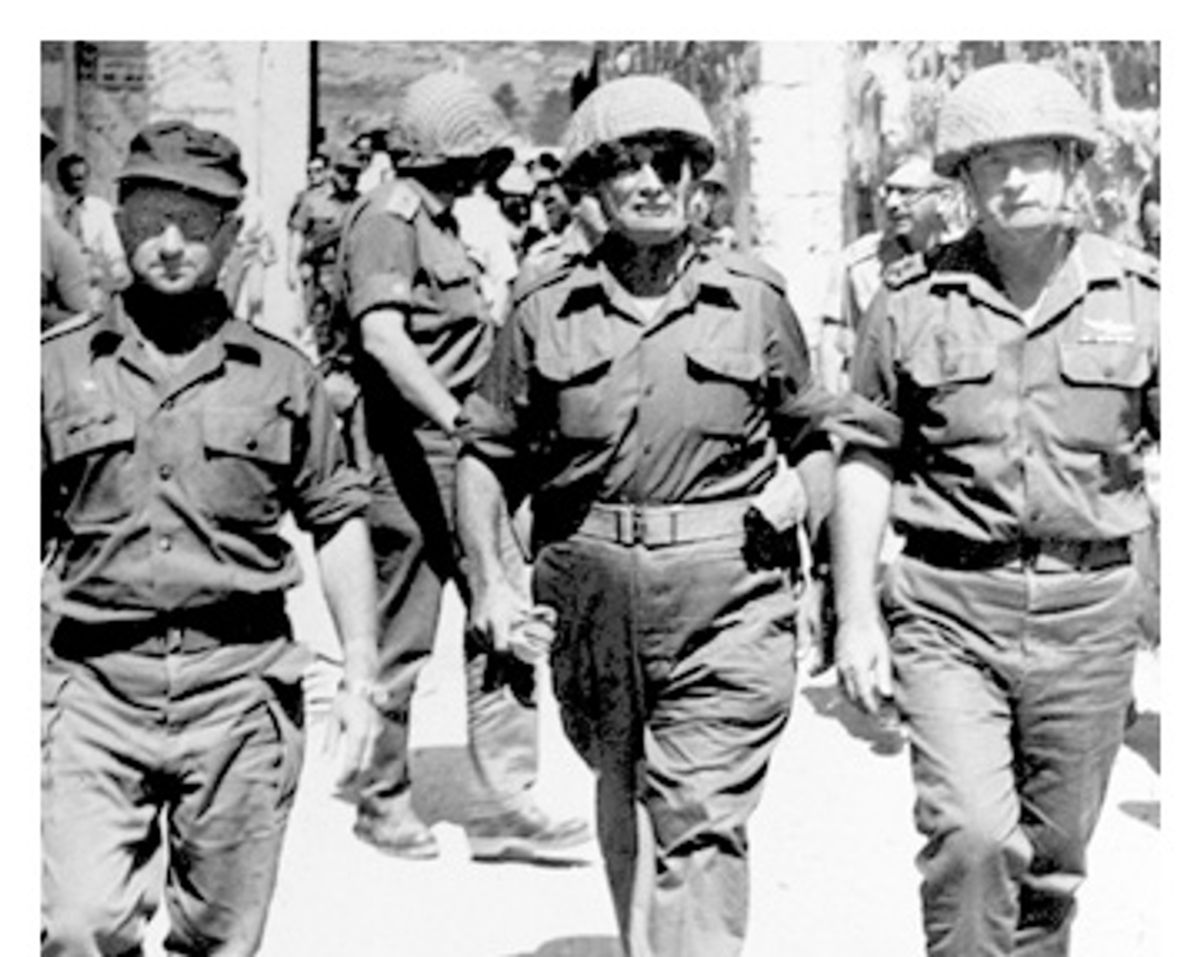 At a little after 7 on the morning of June 5, 1967, as Egyptian President Gamal Abdel Nasser's commanders were finishing their breakfasts and driving to work, French-built Israeli fighter jets roared out of their bases and flew low, below radar, into Egyptian airspace. Within three hours, 500 Israeli sorties had destroyed Nasser's entire air force. Just after midday, the air forces of Jordan and Syria also lay in smoking ruins, and Israel had essentially won the Six-Day War -- in six hours.

Israeli and U.S. historians and commentators describe the surprise attack as necessary, and the war as inevitable, the result of Nasser's fearsome war machine that had closed the Straits of Tiran, evicted United Nations peacekeeping troops, taunted the traumatized Israeli public, and churned toward the Jewish state's border with 100,000 troops. "The morning of 5 June 1967," wrote Israel's warrior-turned-historian, Chaim Herzog, "found Israel's armed forces facing the massed Arab armies around her frontiers." Attack or be annihilated: The choice was clear.

Or was it? Little-noticed details in declassified documents from the LBJ Presidential Library in Austin, Texas, indicate that top officials in the Johnson administration -- including Johnson's most pro-Israeli Cabinet members -- did not believe war between Israel and its neighbors was necessary or inevitable, at least until the final hour. In these documents, Israel emerges as a vastly superior military power, its opponents far weaker than the menacing threat Israel portrayed, and war itself something that Nasser, for all his saber-rattling, tried to avoid until the moment his air force went up in smoke. In particular, the diplomatic role of Nasser's vice president, who was poised to travel to Washington in an effort to resolve the crisis, has received little attention from historians. The documents sharpen a recurring theme in the history of the Israeli-Arab wars, and especially of their telling in the West: From the war of 1948 to the 2007 conflict in Gaza, Israel is often miscast as the vulnerable David in a hostile sea of Arab Goliaths.

"You will whip the hell out of them," Lyndon Johnson told Israeli Foreign Minister Abba Eban during a visit to the White House on May 26, 1967. The president's conclusions were based on multiple intelligence reports, including a CIA assessment that Israel "can maintain internal security, defend successfully against simultaneous Arab attacks on all fronts, launch limited attacks simultaneously on all fronts, or hold any of three fronts while mounting successfully a major offensive on the fourth." As Nicholas Katzenbach, U.S. undersecretary of state at the time, recalled: "The intelligence was absolutely flat on the fact that the Israelis ... could wipe out the Arabs in no time at all."

A key discrepancy lay between U.S. and British intelligence reports and those conveyed to the administration by the Israelis. On May 26, the same day Eban met with Johnson and Defense Secretary Robert McNamara, Dean Rusk, the secretary of state, relayed a message from Israel indicating "that an Egyptian and Syrian attack is imminent." In a memo to the president, Rusk wrote: "Our intelligence does not confirm this Israeli estimate." Indeed, this contradicted all U.S. intelligence, which had characterized Nasser's troops in the Sinai as "defensive in nature" and only half (50,000) of the Israeli estimates. Walt Rostow, the national security advisor, called Israeli estimates of 100,000 Egyptian troops "highly disturbing," and the CIA labeled them "a political gambit" for the United States to stand firm with Israelis, sell them more military hardware, and "put more pressure on Nasser."

As for the Egyptian president, there was a huge difference between his public and private signals. He had threatened Israelis with "annihilation," causing fear bordering on paralysis for a population devastated by the Holocaust. He had closed the Straits of Tiran, a source of less than 10 percent of Israel's shipping, but nevertheless a casus belli as far as Israel was concerned. He had expelled the U.N. peacekeepers from Sinai, further raising fears of war. (Israel, however, refused to accept those same peacekeepers -- a move that would have diminished the chance of war.) And, as the leader of the "Arab nation," Nasser was under great pressure from other Arabs to cut short Israel's nuclear ambitions and deliver the Palestinians back to the homes they had fled and been driven out of in the war of 1948.

But privately Nasser was sending strong signals he would not go to war. On May 31, he met with an American emissary, former Treasury Secretary Robert Anderson, assuring him that Egypt would not "begin any fight." Two days later, Nasser told a British M.P., Christopher Mayhew, that Egypt had "no intention of attacking Israel." The same day he met again with Anderson, agreeing to dispatch his vice president, Zakariya Mohieddin, to Washington, in an apparent last-ditch attempt to avoid war. (Anderson and Johnson had also spoken of a visit to Cairo by Vice President Hubert Humphrey.)

Rostow decided that Israel should know about the secret visit. In a June 2 note to the president, the national security advisor urged that the United States inform Israel of Mohieddin's impending trip to the White House: "My guess is that their intelligence will pick it up." The same day, Nasser sent a telegram to the American president indicating that Egypt would not attack Israel, but that "we shall resist any aggression launched against us or against any Arab state."

The archives for the 1967 war, as with the documentary evidence from other Arab-Israeli wars, thus reveal a history far more complex, and far more interesting, than the inflated portrayal of Arabs poised to crush Israel. "One against 40," declared David Ben-Gurion in describing the odds facing Israel in the war of 1948, ignoring the fact that comparisons of total populations meant little. The records show that the key Arab and Jewish forces -- a much more crucial benchmark -- were about the same, and that after a June 1948 cease-fire, a rearmed Israel had a decided advantage, which it parlayed into victory. Fifty-nine years later, in today's conflict in Gaza, the tragic, well-publicized deaths of Israelis in Sderot from crudely built Qassam missiles -- nine in the last six years -- are dwarfed by the deaths of 650 Palestinians last year (more than half unarmed civilians, according to Amnesty International) from attacks by Israel, one of the most potent and sophisticated military powers in the world, armed with nuclear weapons.

Yet the David vs. Goliath narrative persists, obscuring a more nuanced view of the balance of power in the region. Much of this has to do with Americans' familiarity with the story of Israel as a safe haven for Jews ravaged by the Holocaust. By contrast, Arabs, especially Palestinians, have long been seen as a vaguely menacing Other, as depicted in Leon Uris' hugely influential best-seller, "Exodus." The "Exodus" history, in which Arabs are alternately pathetic or malicious, holds no room for a more layered narrative of the struggle between Arabs and Jews, in which someone like Gamal Abdel Nasser, blustering for the Arab street, may have been privately seeking a way out of war.

Did Nasser truly want peace? We may never know. On June 3, 1967, after Secretary of State Rusk had informed Israel of the pending visit from Egyptian Vice President Mohieddin, Rusk relayed a message from the president to Nasser. "In view of the urgency of the situation," Rusk wrote, "we hope it will be possible for him to come without delay." That same day, however, at a Pentagon meeting between Mossad director Meir Amit and McNamara, the prospects for war seemed closer than ever. Amit told McNamara bluntly that he was "going to recommend that our government strike." This time, the Americans did not object; indeed, the CIA had grown sympathetic to Israel's war aims, in which Nasser, seen as too close to the Soviets, would be defanged. When McNamara asked Amit how long a war would last, the Mossad director replied: "Seven days." And so the meeting between the White House and Mohieddin, scheduled for June 7, never took place. By that time, it was already Day 3 of the Six-Day War, and Israel was already in control of Sinai, the West Bank, Gaza and the skies over much of the Middle East.