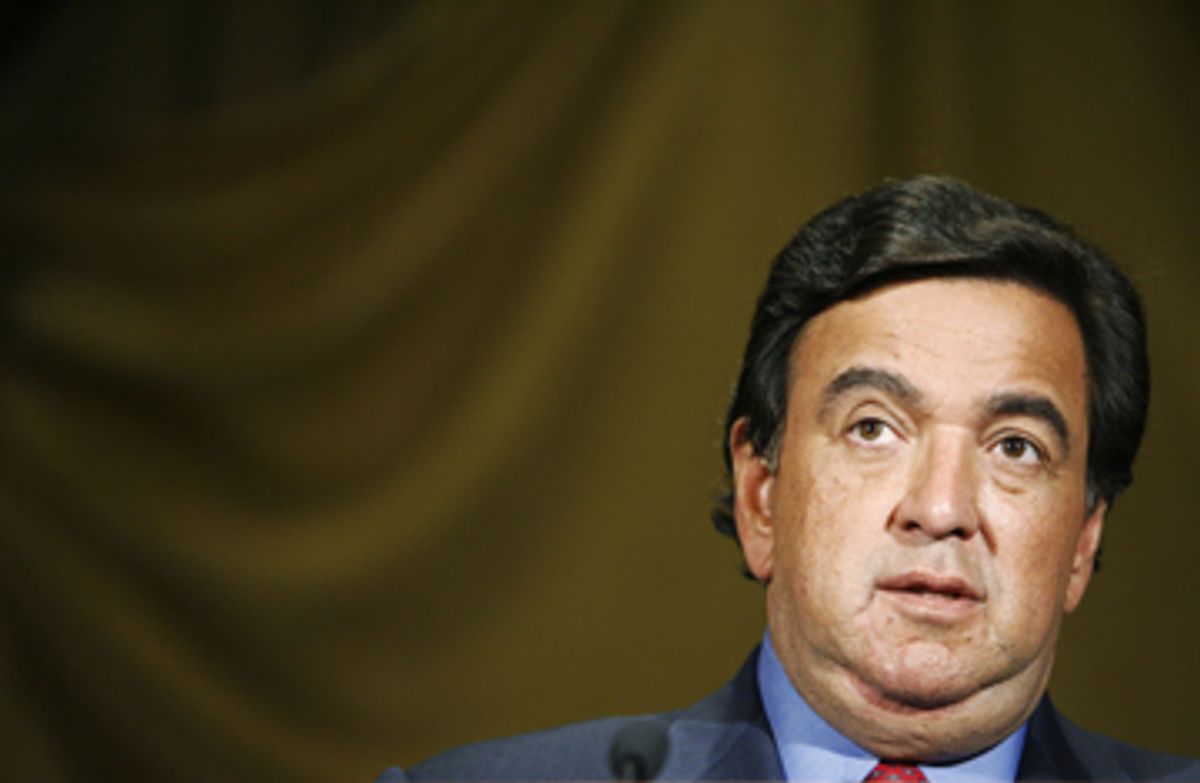 New Mexico Gov. Bill Richardson showed up in the spin room minutes after Sunday's second Democratic presidential debate and announced to reporters, "I think I won." He was smiling, but a drop of sweat escaped his hairline and trickled down the side of his broad face. "I feel I did very well. I feel I am going to move into the first tier with this performance."

It may have been an overly optimistic prediction, though he probably would have made it even if he had fallen down on the stage, knocked over the lectern, and called Wolf Blitzer a four-letter word. This is a delicate a time for Richardson's presidential ambitions. Despite some good television spots and moderately upticking poll numbers in New Hampshire and Iowa, much has been going wrong for his campaign. "It's an important debate for me to do well," Richardson had confided on Saturday during a street walk in Manchester. "Because I need to break out."

Of all the second-tier Democratic candidates, Richardson has been seen as the one most likely to make a move, mainly on the strength of his résumé. He's Hispanic, a Western governor, a former United Nations ambassador, a former secretary of energy, a former congressman, and a man who has personally negotiated with dictators and tyrants in Sudan, North Korea, Iraq, Afghanistan and Cuba. Plus, he is the only Democrat in the field who can pull off polished cowboy boots. But presidential campaigns are not about résumés as much as they are about performance, and Richardson has had his troubles.

In the first few months of the campaign, he admitted to falsely claiming for decades that he was a 1966 baseball draft pick by the Kansas City A's. He told a reporter that he supported Attorney General Alberto Gonzales during the U.S. attorneys scandal because he was Hispanic, but then called for Gonzales' resignation a few days later. He called the compromise immigration bill in the Senate a "good start" but a few days later announced he opposed it. He said his model Supreme Court justice was Byron White but changed his mind when he found out that White wrote the dissent in Roe v. Wade. To top it all off, there is the mother of a fallen Marine in New Mexico accusing him of slighting her dead son's memory, by repeating on the campaign trail an anecdote she says never happened.

All these missteps came into painful relief a week ago on Sunday, when Richardson was pummeled for an hour by Tim Russert on NBC's "Meet the Press." By the end of the show, the candidate seemed to have sunk in his chair. He was looking at the table, not Russert, when he answered questions. At other times his eyes darted around. "I'm not perfect," he said about backing Gonzales initially because of his ethnicity. "I should not have said that," he admitted, when asked about his 1999 claim that nuclear weapons secrets were safe despite unfolding security scandals at the Department of Energy. "I got in trouble again," he said, when Russert pointed out that he claimed to be -- gulp, gasp -- a fan of both the Red Sox and the Yankees.

Richardson's political advisors maintain that he did well on the show, but even Steve Murphy, one of his top advisors, acknowledged that it was a rough ordeal: "Lizzie Borden's dad didn't do to well during the ax murder either," he said, comparing his candidate to a 19th-century homicide victim.

The "Meet the Press" appearance left Richardson teed up for the political chattering class, resulting in a string of nasty articles that openly doubted Richardson's prospects in a cluttered Democratic field. It may also have had an impact among voters, who are still getting to know Richardson. Susan Wolt, a public school food service program director, said she had to turn off the television that previous Sunday morning. "I was thinking very positive and then Tim Russert opened up all these questions and made him seem waffling," she told me at a house party for Richardson on Saturday. "It was getting too aggressive and too hostile for a Sunday morning, so I turned it off."

Wolt said she still didn't know how she would vote, but she had traveled from her home in Plaistow to Manchester to see the candidate speak at 9 a.m. on the front yard of a clapboard home ringed with pink flowers. She said she was drawn to Richardson, in part, because of his television advertisements, which are funny and self-deprecating. They show Richardson facing off with a buffoon employer, who reads off the governor's résumé while eating a sandwich. The spots are also striking for how little time they allow Richardson to address the camera -- relatively unknown candidates more typically use such ads to explicitly introduce themselves to voters.

In person, Richardson's performance can swing wildly even within a single speech. At his best, he is down-home, confident, folksy and authoritative, a sort of liberal Fred Thompson, the Republican actor-turned-candidate from "Law and Order." At his worst, he looks tired and disconnected, and his speech is interspersed with awkward pauses and "uhs." He meanders, adding extra words to his sentences and losing his own train of thought. "Is this heaven? Look at this," he said, at the house party, which had attracted about 15 voters on a sunny day. "And I don't just say that in Iowa. You remember 'Field of Dreams,' the movie, the baseball movie. Well, I say that in Iowa. I have yet to be in that field yet." The New Hampshire crowd did not appear impressed.

Richardson's stump speech consists mostly of a list of issues: six of them, to be exact. He sometimes posits them as his priorities for a metaphorical first six days in office: End the war in Iraq by pulling out all the troops. Achieve energy independence, in part by dramatically strengthening fuel-efficiency standards. Fix education, in part by creating a minimum wage for teachers. Offer health insurance for every American, through tax credits and expanding federal programs. Fix the economy, in part by using the tax code to support small business. And restore America's respect for civil rights, by closing the prison at Guantánamo Bay, protecting a women's right to choose, and allowing gays and lesbians to serve openly in the military.

It is a respectable list, and Richardson has briefing papers to back it up. But on the Manchester front lawn, and later on Saturday at the Democratic state convention in Concord, Richardson never sold the contents of that list with any emotional appeal stemming from his individual talents or biography. What he offered instead were issues, on which most of the Democratic field more or less agree.

He has yet to find a way to truly distinguish himself in one of the most crowded fields of Democratic front-runners in recent memory. Hillary Clinton is running as the most competent candidate. Barack Obama is running as the most aspirational. John Edwards is running as the liberal populist. It is not entirely clear where Richardson, the moderate Western governor with foreign policy experience, fits into the storyline. At the convention in Concord, Dennis Kucinich the left-wing gadfly, got louder applause.

An inability to stand out continued to dog Richardson at the second debate, where he struggled for the first hour even to get in a word. Fifteen minutes passed before Richardson got a first question directed to him, and once he started speaking he often found himself cut off by Blitzer, the moderator, for straying off topic. He was never given a chance to meet one of his primary goals: Establish himself as the only major candidate with a plan to withdraw all troops from Iraq in 2007 -- a reversal of his previous support for the war and a policy that notably puts him to the left of Edwards. "Wolf, frankly, shut him off of this," complained Murphy, the consultant. "John Edwards has endorsed leaving a large number of troops in Iraq." (Edwards has endorsed a deadline for troop withdrawal, saying he wants all troops out of Iraq within about a year, except for an "embassy protection force.")

In the second half of the debate, Richardson performed better, appearing more comfortable and taking strong stands on both education and pressuring China over the Sudanese genocide. The night clearly ended as an improvement over his performance in the first debate in South Carolina, where Richardson had struggled to hear the questions and scowled at the television cameras. "I wish the time had been more proportionate, especially on the Iraq issue," Richardson said, maintaining the positive spin in the spin room. "But I think I had a strong performance."

Richardson's opinion, of course, is not the one that matters in the end. On Saturday, after the house party and the convention, Richardson walked down Union Street, in a largely Hispanic section of Manchester. He chatted with a car mechanic in Spanish and attracted a small crowd of children. He stopped in at several corner stores, and then spoke to a small crowd of diners at the Don Quijote Restaurant. The place is a New Hampshire institution of sorts for Spanish-speaking residents. Unless Richardson steadies his campaign performance in the coming months, its name could also become a symbol of his presidential ambitions.