The Obama campaign released a new Facebook tool quickly after the site upgraded its system. Could that be because one of Facebook's founders now works for him? 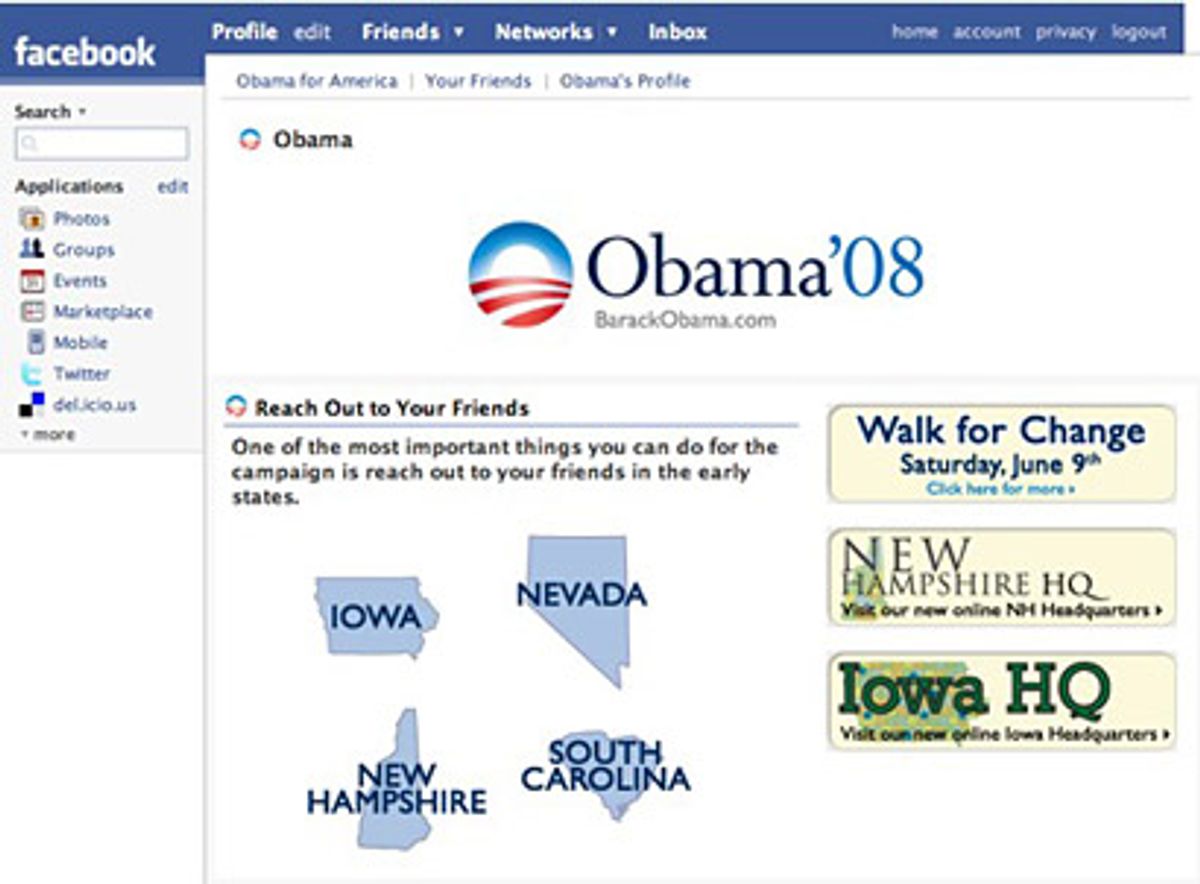 At the techPresident blog, Joshua Levy and Micah Sifry charge that Barack Obama's campaign has received an unfair upper hand from the online social networking site Facebook. And not only that, but Facebook may have violated campaign finance rules in helping the candidate out. While their story is a bit murky, with neither Facebook nor Obama's campaign giving any firm answers, it is bolstered by an eyebrow-raising connection -- Chris Hughes, one of Facebook's founders, now works for the Obama campaign.

The alleged bit of favoritism concerns the Facebook Platform, a system that the company unveiled on May 24. The Platform lets independent developers create applications that can easily plug in to people's Facebook pages. The applications do all sorts of things -- Flixster lets people share movie reviews, iLike shows off Facebookers' music ratings, and so on. While Facebook was developing the system, it allowed several companies -- including Microsoft, the Washington Post, Digg and others -- to access it, and many unveiled applications as soon as the Platform launched. Levy and Sifry say that Facebook also gave special access to the Obama campaign. The campaign released its own Facebook app just hours after the company launched the developer platform; although all of Obama's major rivals maintain Facebook pages, none have yet created their own Facebook applications.

Obama's Facebook application is a high-class production. As the blogger Rick Klau points out, the app lets Facebook users add Obama's information to their own pages with a single click -- kind of like an audio-and-video bumper sticker for the Web. The app has been a hit, too; more than 13,000 people have added it so far (and these things grow geometrically -- the more pages the app is on, the more people see it, the more people add it, and on and on until the whole planet's got Obama on their pages). Clearly, argue Levy and Sifry, the app was a long-planned thing; Facebook programs aren't something "a coder puts together in an afternoon," so to have built something so good so fast, the Obama camp must have been tipped off to Facebook's Platform before its public launch.

Chris Kelly, Facebook's chief privacy officer, offers Levy and Sifry a vague explanation, neither confirming nor denying, apparently, that the company gave Obama an assist. Kelly says instead that parts of Facebook's Platform have been available since last September, and "we've had a number of conversations with many campaigns over the intervening months about how they can use the developer API and Facebook Platform." But Levy and Sifry say that they spoke to Obama's rivals and determined that no one else knew about the Facebook Platform before it launched. Obama's campaign gave Levy and Sifry a non-answer: "The Obama campaign produced the tools ourselves, followed the guidelines set out by Facebook and look forward to welcoming more friends to our network."

What makes this story more than an odd mystery is Facebook's link to Obama. Chris Hughes was a sophomore at Harvard when he helped his roommates, Mark Zuckerberg and Dustin Moskovitz, set the site up, and last year, after graduating, he went to work for the company full-time. "But five months ago," as the Wall Street Journal reported in a recent admiring profile, Hughes "put his career on hold to move to Chicago, in the dead of winter, for a 'significant' pay cut, in favor of a 14-hour-a-day job with Mr. Obama's campaign. His goal: to transfer the same magic that transformed the way college students interact to a presidential campaign."

Is it possible that Hughes brought too much of the Facebook magic with him -- including even inside knowledge of an upcoming feature? Levy and Sifry say that if this did occur, Facebook "may have made an illegal in-kind donation to Obama." It's not clear yet that it did. But it doesn't smell too good.