How one American mom's desire to donate breast milk to African orphans, with a little help from Oprah, stirred up a milk bank mess. 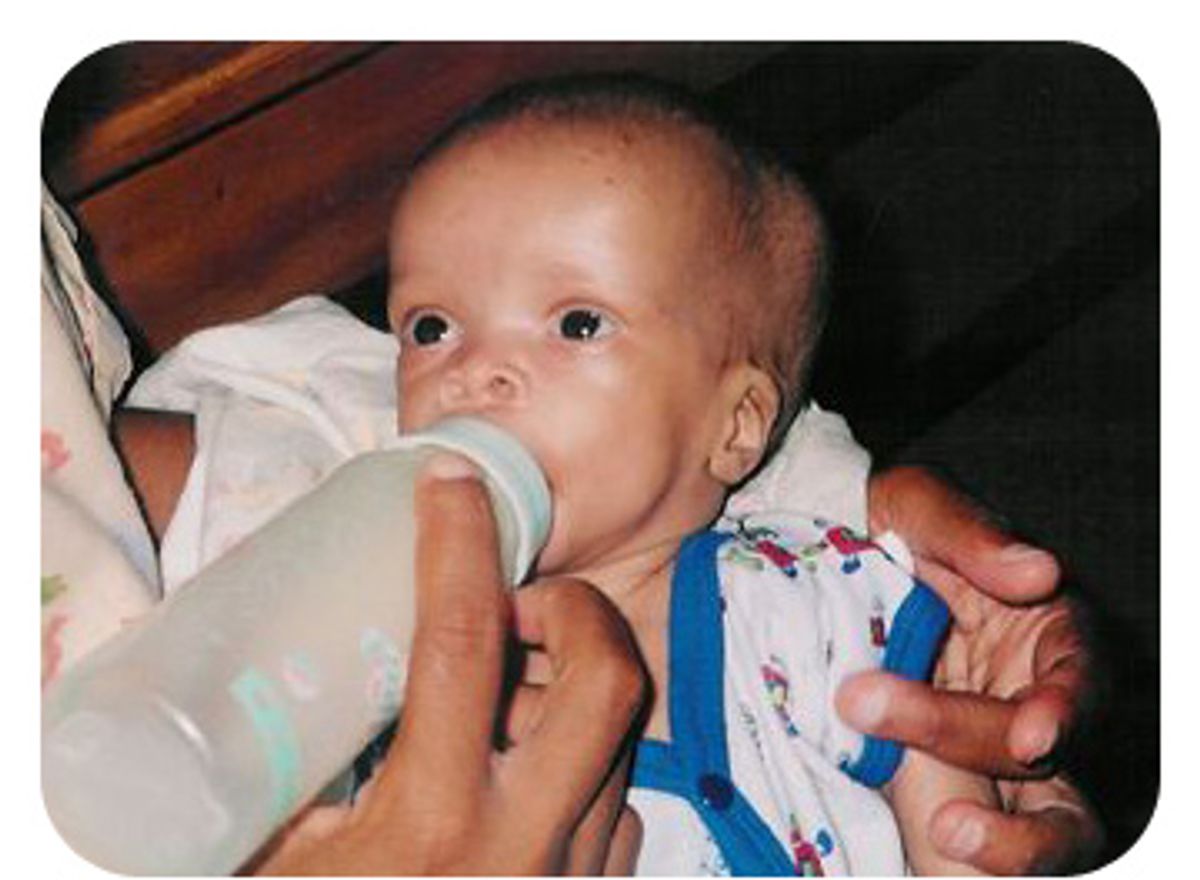 When Oprah Winfrey profiled a young mother who was sending American women's excess breast milk to African AIDS orphans last year, the philanthropic project seemed immune to controversy. After all, these babies represented some of the most helpless and needy children on earth, and breast milk was supposed to offer them a six times greater chance of survival. The larger-than-life media-genic symbolism of it all -- American women giving their very bodily fluids to feed frail, desperate third-world foundlings -- made the project all the more irresistible. Jill Youse, a charming, self-effacing young woman from Minnesota with no background in activism, much less lactivism, had happened on the idea while trying to figure out a way to donate a freezer full of her own excess "liquid gold." When she spotted an online article about an orphanage in South Africa that wanted breast milk for AIDS orphans, she contacted it with her offer.

"They told me, 'You do know we're in Africa, don't you?'" she recalls. By the time she learned that the shipping would cost $2,000, she was already determined to get those babies her milk no matter what it cost her. Eventually, she arranged a less expensive (if more theatrical) way to transport the milk.

"I flew to Boston and met a staff member who was returning to Africa at the airport," she explains. "And I really thought that was the end of it."

But sometimes good publicity is the mother of invention. Newspaper articles about Youse's bit of charitable windmill tilting inspired other mothers with freezers full of translucent blue baggies to contact Youse about donating milk to AIDS orphans as well. Soon Youse was committed to arranging yet another shipment to Africa -- this time about 5,000 ounces from an assortment of donors. In the coming months Youse would partner with various corporations (like Quick International Courier), the most important of which would be Prolacta -- a for-profit milk bank based in Monrovia, Calif., which would screen donors, test their blood and milk, and pasteurize and store the milk to be sent in batches to various orphanages in Africa. "They stepped forward and committed to helping me," says Youse. "I'm very grateful for their generosity. In an ideal world for-profits step forward to help nonprofits. I'm so proud to partner with them."

The effort -- dubbed the International Breast Milk Project -- attracted yet more media attention, including a profile in Time.com, an interview with Foreign Policy and an appearance on "Oprah." "I don't know if people can relate to the Oprah effect," Youse laughs, "but it is real."

In the wake of the "Oprah" spot in October, the project was deluged with applicants. "We had agreed to process and send 10,000 ounces in 2007," Prolacta CEO Scott Elster says. "And we didn't know if Jill could actually collect that much. Suddenly we were overwhelmed."

But in the meantime, some donors were wondering exactly where all their breast milk was going. Frequently asked questions on the IBMP Web site only confirmed that Prolacta had committed to a total of 10,000 ounces, while statements from Youse referring to 800 donor applicants suggested that far more milk was coming in. Some critics guessed that the milk banks had received something close to 400,0000 ounces.

Where was the all the milk going? According to some prospective donor mothers, e-mail responses from Prolacta employees were vague, reiterating the 10,000-ounce commitment but not accounting for the veritable spigot of mama milk that Oprah's coverage had helped open. After Mothering Magazine began promoting IBMP last week, Jennifer Laycock, aka author of the Lactivist blog, finally posed the question: "Is the International Breast Milk Project a Scam?"

Thus was born a tempest in a breast pump. Laycock's postings summed up the questions encircling the project: Was Prolacta selling milk meant for African orphans for its average $35 an ounce? Was Jill Youse on the Prolacta payroll? Had Prolacta taken IBMP under its wing to boost its public image and fill its empty freezers?

Earlier this week, Prolacta and Youse attempted to clear the milky waters. According to Elster, all milk received from the inception of the IBMP project to May 31 of this year will go to Africa. After May 31, however, IBMP will send 25 percent of all donations received to Africa, and 75 percent will be sold to Prolacta for $1 an ounce. What kind of profit margin does this mean for Prolacta? Potentially a motherlode. If, as Elster told me, the average donation runs around 180 ounces, then that would mean that 135 ounces (75 percent) "sold" to Prolacta would generate around $4,725 (at $35 an ounce) for the company, or about $3,890 after subtracting the expense of donor processing (about $700 per donor) and the cash payment to IBMP.

Jill Youse emphasizes that since she doesn't take a salary or employ any staff, all the money IBMF generates from this arrangement will go toward helping African orphans. She says she's thrilled with the new arrangement. "We ask for this because we think the money will go a lot farther," she explains. "Prolacta just keeps saying yes to whatever we ask for."

Laycock agrees that if Prolacta and IBMP continue to fully disclose this arrangement, she "can't fault them for being sneaky or accuse them of being a scam." Even with the fate of all that frozen breast milk decided, however, Laycock is still skeptical about Prolacta's mission. There are currently two basic avenues for breast milk donation in the United States: nonprofit milk banks organized under the Human Milk Banking Association of North America and 17 milk banks that sell milk to Prolacta (for $1 to $2 an ounce). One of the most prominent of the Prolacta-associated banks is the National Milk Bank Project, which Laycock says was not fully open about its relationship with Prolacta: "It took a long time for donors to the National Milk Bank Project to realize that they were essentially donating to Prolacta," she explains.

Over the years, critics have pointed to the fact that Prolacta's product is essentially the same as that of the not-for-profit milk banks (which sell their milk for about $3 an ounce). To differentiate itself, Prolacta makes it very easy for mothers to donate their milk -- sending phlebotomists to women's homes, along with breast pumps and shipping materials. Prolacta has also suggested that its milk was more thoroughly tested and emphasized that it could guarantee a certain caloric value per ounce. Eventually many of the nonprofit milk banks also began guaranteeing caloric consistency.

In early 2006 Prolacta finally released a product that wasn't simply overpriced breast milk but something new: a milk fortifier -- a concentrated additive made from human milk to be added to breast milk for premature infants. (Neonatal intensive-care units typically fortify breast milk for premature infants with fortifiers made by formula companies out of cow milk and soy-based products. But for extremely frail newborns, foreign proteins from cows or soybeans can trigger potentially fatal allergic reactions.)

Laycock remains skeptical that Prolacta has discovered a human-milk-based fortifier. "Why you do only hear about it on Prolacta's Web site?" she asks. "Where are the articles in peer-reviewed journals?"

Despite this potentially groundbreaking product, Elster admits that his company has yet to become the liquid gold mine that some skeptics imagine. "People think we're some sort of juggernaut," he says of the 7-year-old company, adding that the commitment to the International Breast Milk Project has been a "challenge". "Yes we hope to make a profit. But we've been open seven years and we've only made $1 million in sales and sunk $13 million into investment." He pauses. "As a CEO, I really hate to say this."

Prolacta's profits aside, a question remains: Should we really be sending frozen breast milk to Africa? Given the shipping, the refrigeration, the sheer expense of transporting precious little of the precious liquid around the globe, is it more important as a symbol than as an effective solution? As Laycock observes: "Fifteen thousand ounces will feed three babies for six months. If those dollars spent processing and transporting milk could be spent setting up milk banking in a country, one can only imagine how much more they could accomplish."

In part, Youse agrees with this sentiment, though she adds that not all communities in Africa are good candidates for setting up local breast milk banks. In addition to widespread HIV infection among potential donors, there are cultural and practical obstacles. "In some places, it can work, in others it's never going to happen," says Youse. But in general she acknowledges that transporting milk safely to Africa is extremely expensive and not terribly efficient.

IBMP and Prolacta make strange crib fellows. As both Youse and Elster spin it, their new arrangement represents a healthy sort of symbiotic relationship between charity and capitalism. But at what price? Is giving 45 ounces of breast milk at a cost of $135 to African babies really a good exchange rate for a commodity that can deliver $3,890 to a for-profit company? At this point, such questions are impossible to answer -- especially before Prolacta presents results from its clinical trials. Ironically, though, if the International Breast Milk Foundation does open a wellspring of donations for Prolacta, thereby helping to fund a lifesaving milk fortifier, the women that set out to save the lives of African babies may end up doing far more to save babies back home.

Carol Lloyd is currently at work on a book about the gentrification wars in San Francisco's Mission District.