Having never expressed remorse for his crime, Scooter Libby instead enlisted his neoconservative friends to win him reduced prison time. 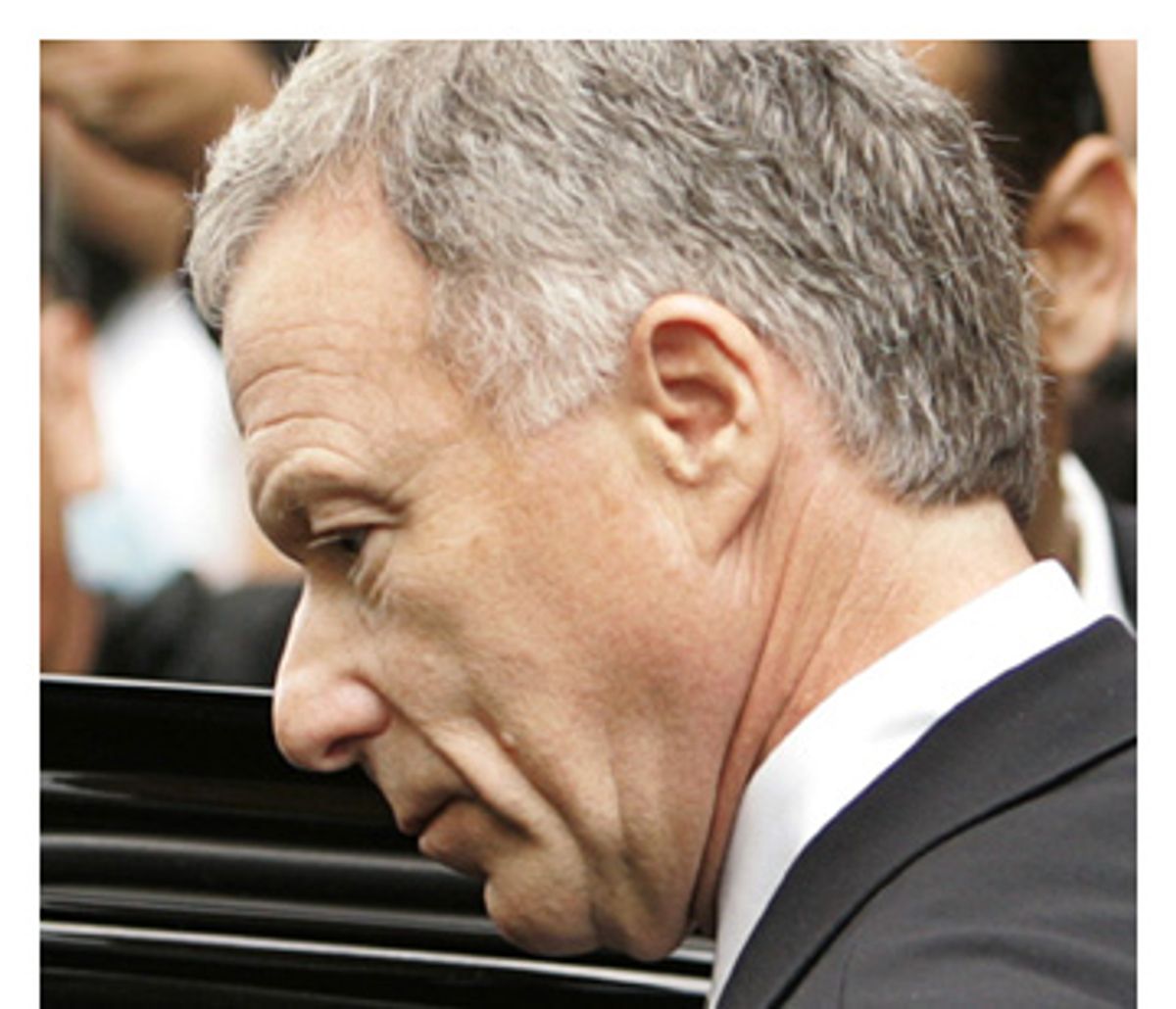 Those who served most closely with him described their feelings with persuasive intensity. One after another they used the same words: "Raymond Shaw is the kindest, bravest, warmest, most wonderful human being I've ever known in my life." Gradually, however, Major Ben Marco breaks through his brainwashing to discover that Raymond Shaw is a sleeper agent programmed to install the Manchurian candidate as president.

One after another, in nearly the same language, in letters that Gen. Peter Pace, chairman of the Joint Chiefs of Staff acknowledged had been prompted by I. Lewis "Scooter" Libby, in his attempt to mitigate a harsh sentence for his conviction for perjury and obstruction of justice, dozens of people described the former chief of staff to the vice president with the warmest feelings.

"I know Mr. Libby to be a patriot, a dedicated public servant, a strong family man, and a tireless, honorable, selfless human being," wrote Donald Rumsfeld, the former secretary of defense.

"Mr. Libby was one of the most dedicated public servants I have known in my career," wrote Eric Edelman, the undersecretary of defense for policy.

"I can say, without hesitation, that Scooter was among the finest and most selfless public officials with whom I have ever worked," wrote John Hannah, Vice President Cheney's national security advisor.

"Scooter Libby is one of the most genuine, kind, hardworking and patriotic people I know," wrote Elizabeth Denny, Cheney's social secretary.

"The Scooter Libby I have known for a number of years now is someone about whom such crimes as perjury and obstruction of justice seem as improbable to me as life on Mars," wrote Midge Decter, the neoconservative writer. Her husband, Norman Podhoretz, the neoconservative editor emeritus of Commentary magazine, wrote: "Like everyone else who knows him, I find it inconceivable that a man of his sterling character, who is also famous for his lawyerly scrupulousness, could deliberately have told lies to a grand jury, or for that matter to anyone else." (Decter and Podhoretz's son-in-law, Elliott Abrams, convicted of lying to Congress in the Iran-Contra scandal and subsequently pardoned, is a deputy national security advisor.)

Unmoved by these letters, Judge Reggie Walton imposed a sentence of two and a half years and a $250,000 fine, and told Libby, "Your lies blocked an extremely serious investigation, and as a result you will indeed go to prison." Almost immediately, Cheney praised Libby's "personal integrity," and added his wish that the sentence will be overturned on appeal: "Speaking as friends, we hope that our system will return a final result consistent with what we know of this fine man." Thus, Cheney encouraged his former chief of staff to maintain his steadfast refusal to implicate his former boss in the crimes Libby felt compelled to cover up with his lies to the grand jury.

To be sure, others convicted of crimes often submit similar testimonials before sentencing. But most of those who throw themselves on the mercy of the court express sorrow at what they have done. Libby, however, refused to show remorse. He offered no contrition, only an exercise in victimhood. Like the child who has killed his parents and demands mercy for being an orphan, Libby tried to murder the truth and then got dozens of people to plead for leniency based on his good character.

The act of procuring these letters is further evidence of Libby's stove-piping of disinformation. Libby could not reasonably have expected to sway the judge, but there is a higher authority to which he is appealing. These letters constitute the beginnings of the Libby Lobby's pardon campaign.

Ironically, the longest, most detailed and among the most personal letters supporting Libby is also the most damaging. In "Re: Character Reference for I. Lewis Libby," Paul Wolfowitz writes, "I am currently serving, until June 30 of this year, as President of the World Bank." Either obtusely or obliquely, Wolfowitz's opening line emphasizes the symbiotic nature of their careers, both men having fallen from grace within weeks of each other after years of collaboration. "It is painful for me to reflect on the fact that his life would have been very different if we had never met. He would almost certainly now be a successful attorney in Philadelphia." Wolfowitz describes their 35-year association, going back to when he was an assistant professor at Yale and Libby was his assistant, and how he recruited Libby to serve as his assistant in the State Department and then in the Defense Department. According to Wolfowitz's account, Libby was an indispensable man in ending the Cold War, winning the Gulf War and waging the "global war on terror." But he was also, Wolfowitz writes, of "service to individuals."

The leading example he offers is a stunning revelation, which does not reflect on Libby's charity, compassion and sympathy as Wolfowitz might imagine. The story about Libby "involves his effort to persuade a newspaper not to publish information that would have endangered the life of a covert CIA agent working overseas. Late into the evening, long after most others had left the matter to be dealt with the next day, Mr. Libby worked to collect the information that was needed to persuade the editor not to run the story."

Unintentionally and foolishly, Wolfowitz has hanged the guilty man again. Wolfowitz's defense of Libby is composed with the same care and skill that Wolfowitz brought to the invasion and occupation of Iraq, creating the opposite effects of what he desired. In this bizarre disclosure, rather than exculpating Libby, Wolfowitz incriminates him; for this story is damning evidence of Libby's state of mind -- that he knew he was engaged in wrongdoing in leaking the identity of a CIA covert operative, Valerie Plame Wilson, to two reporters, Judith Miller of the New York Times and Matt Cooper of Time magazine, and in vouchsafing it to White House press secretary Ari Fleischer for the purpose of his leaking it to the press, which he promptly did.

In their filings and sentence pleading, Libby's lawyers argued repeatedly that he did not know that Plame was covert, that he did not "knowingly disclose classified material," and, as his lead attorney, Ted Wells, told the jury in his closing statement, that Libby acted in "good faith," always believing that he was operating within the law. On Oct. 30, 2006, his lawyers filed a claim denying that "any damage to the national security, the CIA, or Ms. Wilson herself was, or could have been, caused by the disclosure of that status."

Once again, Wolfowitz has blundered. Just as he has undone himself at the World Bank, this time he has inadvertently exposed Libby's "good faith" for bad faith. Indeed, the Wolfowitz letter shows that Libby knew the consequences of revealing the "status" of a CIA operative. As evidence introduced in the CIA leak case proved, Cheney had confided the secret to him and ordered him to spread it. But Libby has never mentioned the previous incident of apparently trying to protect a covert CIA operative. If Wolfowitz remembers the story, and it's credible, so Libby must recall it too. Therefore, he must also have known that his defense was based on false premises contrary to what he understood to be right and how he had acted in the past. He sent his attorneys to court to make a case he consciously knew was wrong from his own prior experience of having protected a national security asset from exposure. One can only wonder if Libby ever told his lawyers the story that Wolfowitz has recounted or whether he misled them, too.

The sentencing letters in support of Libby are a treasure trove of ironies and hypocrisies, pointing to the past actions of the epistolary authors or Libby. Seeking to arouse sympathy for his former disciple, Wolfowitz writes, "Harriet and Scooter Libby are both deeply loving parents and the suffering of their children has been a torture for them both." The word "torture" is an especially artless choice. Libby, in fact, was instrumental in Bush's torture policy, even browbeating and isolating administration officials who raised questions about it, as one of them who was subject to Libby's scorn told me.

Yet Douglas Feith, a former undersecretary of defense, wrote in a letter, "Scooter showed an admirable concern for preserving civil liberties." In the Pentagon, Feith oversaw the Office of Special Plans, constructed as a parallel intelligence operation apart from the regular channels to give a stamp of approval to what turned out uniformly to be disinformation about Saddam Hussein's weapons of mass destruction and supposed links to terrorism. These falsehoods, collected almost exclusively from the neoconservatives' favorite Iraqi exile, Ahmed Chalabi, were siphoned from the OSP to the OVP (Office of the Vice President), where Libby was in charge of packaging them. Libby and Cheney appeared at CIA headquarters numerous times, occasions on which Libby forced analysts to respond to his relentless interrogatories in order to get them to give their stamp of authority that the information was true. Within the CIA, the analysts even began to prepare for these visits with "murder boards," according to former CIA director George Tenet's memoir, "At the Center of the Storm." He quotes a senior analyst: "Were they trying to push us and drive us? Absolutely." Secretary of State Colin Powell rejected "one of Libby's lengthy briefs out of hand as a basis for his Feb. 5, 2003, speech before the United Nations Security Council on Saddam's WMD and al-Qaida connections, but nonetheless still delivered a speech replete with disinformation. (Powell and Tenet were not among those who wrote letters on Libby's behalf.)

Another letter writer, John Bolton, defended Libby's perjury merely as a lapse of "perfect recall." He also offered opinions on the handling of intelligence. "With classified information, it was frequently hard to know who was cleared to see what or what could be discussed with whom. If there is anyone who fully understands our 'system' for protecting classified information, I have yet to meet him." Bolton, the former U.N. ambassador and undersecretary of state for arms control, was Cheney and Libby's ally within the State Department, blocking and spying on Powell. Bolton gamed the "system" to keep information from Powell, sought to intimidate State Department Intelligence and Research Bureau analysts into accepting his skewed views, and tried to reassign them when they did not bend. Libby, for his part, was also crucial in blackballing Foreign Service officers, experienced in nation building, who were involved in Powell's elaborate "Future of Iraq" project.

Kenneth Adelman, a neoconservative former member of the Pentagon's Defense Policy Board, who had declared that the war in Iraq would be a "cakewalk," wrote a letter for Libby, too. "Your Honor," he wrote, "this is punishment enough. Hence I ask that this decent man not be subjected to time in jail, and allowed to cope with his conviction as best as anyone could in these circumstances. After all, Scooter Libby is a good person."

A neoconservative is a Bush administration official who has mugged reality and claims he's the victim. Neoconservatism has now been reduced to a clemency plea.