The CIA's favorite form of torture

If the Bush administration forces the CIA to drop "tough" interrogation techniques like waterboarding, the agency will probably fall back on a brutal method that leaves no physical marks. 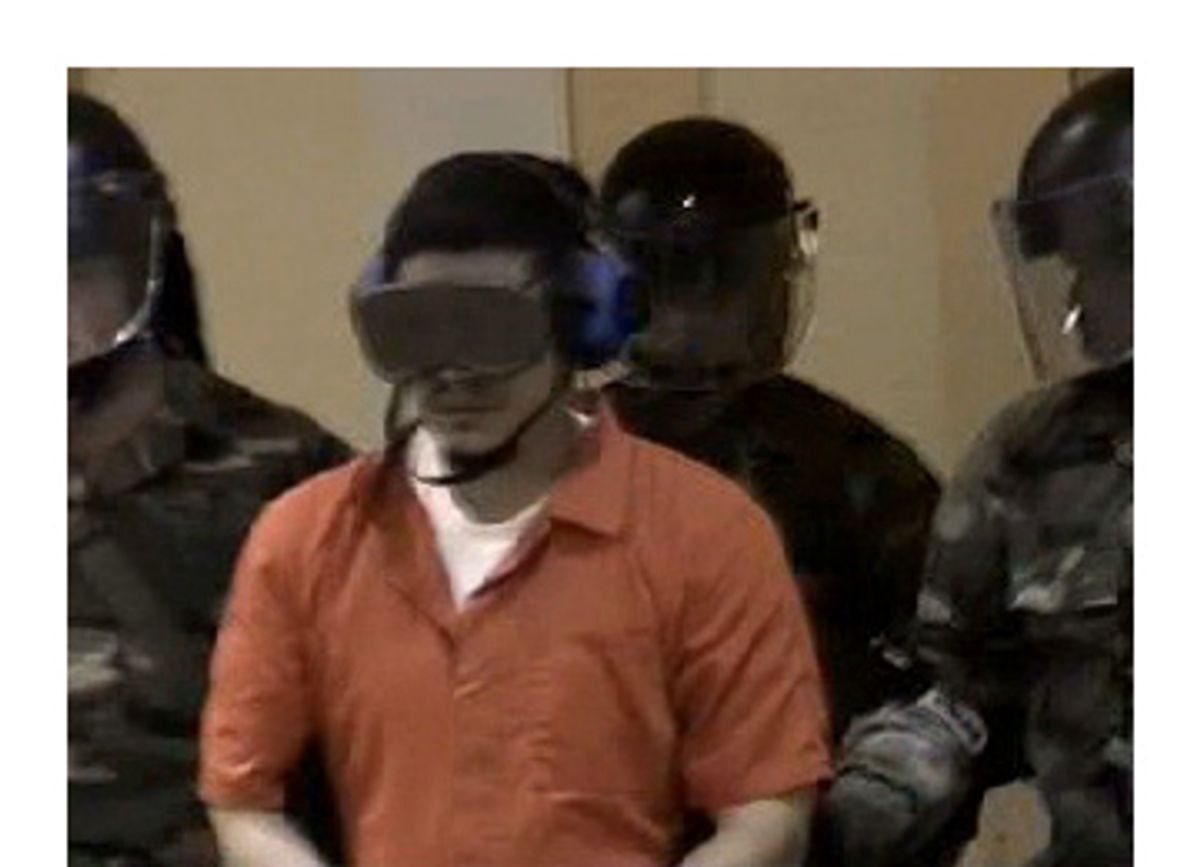 According to news reports, the White House is preparing to issue an executive order that will set new ground rules for the CIA's secret program for interrogating captured al-Qaida types. Constrained by the 2006 Military Commissions Act, which contains a strict ban on abuse, it is anticipated that the order will jettison waterboarding and other brutal interrogation techniques.

But President Bush has insisted publicly that "tough" techniques work, and has signaled that the CIA's secret program can somehow continue under the rubric of the Military Commissions Act. The executive order will reportedly hand the CIA greater latitude than the military to conduct coercive interrogations. If waterboarding goes the way of the Iron Maiden, what "tough" techniques will the CIA use on its high-value detainees?

The answer is most likely a measure long favored by the CIA -- sensory deprivation. The benign-sounding form of psychological coercion has been considered effective for most of the life of the agency, and its slippery definition might allow it to squeeze through loopholes in a law that seeks to ban prisoner abuse. Interviews with former CIA officials and experts on interrogation suggest that it is an obvious choice for interrogators newly constrained by law. The technique has already been employed during the "war on terror," and, Salon has learned, was apparently used on 14 high-value detainees now held at Guantánamo Bay.

A former top CIA official predicted to Salon that sensory deprivation would remain available to the agency as an interrogation tool in the future. "I'd be surprised if [sensory deprivation] came out of the toolbox," said A.B. Krongard, who was the No. 3 official at the CIA until late 2004. Alfred McCoy, a history professor at the University of Wisconsin-Madison who has written extensively about the history of CIA interrogation, agrees with Krongard that the CIA will continue to employ sensory deprivation. "Of course they will," predicted McCoy. "It is embedded in the doctrine." For the CIA to stop using sensory deprivation, McCoy says, "The leopard would have to change his spots." And he warned that a practice that may sound innocuous to some was sharpened by the agency over the years into a horrifying torture technique.

Sensory deprivation, as CIA research and other agency interrogation materials demonstrate, is a remarkably simple concept. It can be inflicted by immobilizing individuals in small, soundproof rooms and fitting them with blacked-out goggles and earmuffs. "The first thing that happens is extraordinary hallucinations akin to mescaline," explained McCoy. "I mean extreme hallucinations" of sight and sound. It is followed, in some cases within just two days, by what McCoy called a "breakdown akin to psychosis."

It is therefore as insidious as some forms of obviously abusive coercion that are likely to be forbidden under the new CIA rules, like waterboarding, the technique of strapping a subject to a board with his feet raised and pouring water on his face to produce a sensation of imminent death. Legally, however, sensory deprivation is more nebulous than physical abuse, and that is what worries human rights advocates.

"People finally came to an understanding of what waterboarding really was, and once that happened, it was no longer sustainable," noted Elisa Massimino, Washington director of Human Rights First. Just like waterboarding, Massimino said, extreme sensory deprivation techniques "push people beyond the brink of what they can bear, physically and mentally. Once you understand that, the veneer of acceptability -- the myth that 'it's not torture, it's just harsh' -- completely falls apart." But compared to the outcry over physical torture, she described a "deafening silence" about techniques like sensory deprivation.

The issue, said Massimino, is that sensory deprivation is relative -- she compared it to a "rheostat." Former CIA executive director Krongard made the same point about sensory deprivation's variability, saying that the techniques exist on a spectrum. The term could refer to anything from being left alone in a room to being subjected to complex get-ups combining goggles, earmuffs, mittens and darkened cells that quickly drive subjects into psychotic states.

On the low end, said Krongard, sensory deprivation techniques would pass muster with most observers. But he admitted that taken to extremes, some methods "would not pass anybody's muster." Sensory deprivation techniques taken to extremes would clearly violate the Geneva Conventions, according to international law experts, and would appear to be illegal under the Military Commissions Act, which bans "severe or serious mental pain and suffering." McCoy stated that based on his experience tracking down and interviewing subjects from the CIA's early research, some subjects never fully recover.

Sensory deprivation has apparently already been employed during the so-called war on terror. The prevalence of its use has been hinted at in images of alleged terror-plotter Jose Padilla and of detainees at Guantánamo shown wearing blacked-out goggles and earmuffs -- basic deprivation tools intended to soften prisoners up mentally by plunging them into a sensory void. A source familiar with the 14 high-value detainees interrogated at the CIA's so-called black sites and transferred to military custody at Guantánamo late last year, said the CIA appeared to have used some form of sensory deprivation techniques on most, if not all, of those 14 high-value detainees.

But the CIA's reliance on sensory deprivation goes all the way back to the early days of the Cold War. It is a big part of the CIA's 1963 "KUBARK" interrogation manual, obtained in 1997 by the Baltimore Sun. That agency manual describes sensory deprivation as a central tenet of coercive interrogations. For particularly rapid results, the manual endorses the use of a "cell which has no light (or weak artificial light which never varies), which is sound-proofed, in which odors are eliminated, etc." Following that plan, the manual says, "induces stress; the stress becomes unbearable for most subjects." The manual adds, "The subject has a growing need for physical and social stimuli; and some subjects progressively lose touch with reality, focus inwardly, and produce delusions, hallucinations, and other pathological effects."

As proof, the KUBARK manual refers to a raft of CIA-sponsored Cold War research on sensory deprivation, including studies at McGill University in Montreal and the National Institute of Mental Health. Subjects in that research were placed in isolated water tanks or confined to silent rooms on soft mattresses, wearing blacked-out goggles and earmuffs. In one study, subjects experienced "visual imagery somewhat resembling hallucinations" within three hours. In another study, only 6 of 17 subjects could last 36 hours on a mattress in a quiet tank that prohibited movement. The stress is described in the KUBARK manual as "unbearable."

The dark world of CIA-sponsored sensory deprivation research is plumbed in depth in the book "A Question of Torture: CIA Interrogation From the Cold War to the War on Terror," written by McCoy. "They've been doing this for 50 years," McCoy explained. His book discusses more CIA-sponsored research at McGill by Dr. Donald O. Hebb, who during the same era placed 22 college students in small, sound-proof cubicles, wearing translucent goggles, thick gloves and a U-shaped pillow around the head. Most subjects quit within two days and all experienced hallucinations and "deterioration in the capacity to think systematically."

The theory behind the CIA's fascination with sensory deprivation, McCoy said, is that subjects are so starved for stimulation that they will even crave interaction with their interrogator. "The idea is that they break down and then they cling to the interrogator, because you are hungry for stimulus," McCoy explained.

There is a debate about whether breaking down the subjects in this manner produces any good intelligence. Military intelligence experts raise serious doubts. Peter Bauer, a former senior interrogation resistance trainer for NATO, called sensory deprivation methods "coercive techniques that could produce false information, rather than actionable intelligence." Bauer, who was the most forward-deployed Army interrogator during Operation Desert Storm, said sensory deprivation can drive people to come up with lies "based on ending the harsh treatment. That is not an effective way to conduct intelligence collection operations."

But the White House has apparently adopted the CIA's logic, which suggests that sensory deprivation is not going to go away any time soon. When President Bush unveiled the CIA interrogation program Sept. 6, he called it "one of the most vital tools" against al-Qaida. "Part of it is that they really do believe these techniques work," explained Darius Rejali, a professor at Reed College and author of the upcoming book "Torture and Democracy," due out later this year. "It is a kind of hall-of-mirrors effect. All the information they are getting is all from coercive interrogation," he said. "Everything begins to reflect everything else. It all looks like it is making sense."

The White House has pledged to inform the Senate Select Committee on Intelligence of all future CIA interrogation methods. The upcoming executive order is supposed to be a public document and will most likely rationalize the CIA program in cryptic legalese. Congressional staffers said they expect the CIA to issue separate and secret guidelines that explicitly lay out for agents what interrogation tools are at their disposal.

If the White House is preparing a bid to legally rationalize psychologically coercive interrogations, it must do so in a new legal environment that gives administration attorneys little room to maneuver. The Supreme Court has ruled that the basic tenets of the Geneva Conventions apply to all detainees. And the Military Commissions Act contains an abuse ban designed to rein in administration attorneys who have used the most imaginative interpretations of the law to proceed with coercive interrogations. It is that law that requires the White House to issue the executive order that will govern future CIA interrogations.

But human rights groups were confounded when Bush signed the Military Commissions Act into law on Oct. 17 and announced that it would allow what he has called "tough" CIA interrogations to continue. "This program has been one of the most successful intelligence efforts in American history," Bush added proudly.

If the White House chooses to go the sensory deprivation route, it is unclear what, if anything, Congress could do to put a stop to it. There are limited tools available to the Senate Intelligence Committee, the committee with direct oversight of the agency, to step in. As one committee aide explained, "We don't have a veto over it."