Clooney, Pitt and Damon gamely give it another go in this raffish, if fluffy sequel to a sequel to a remake. 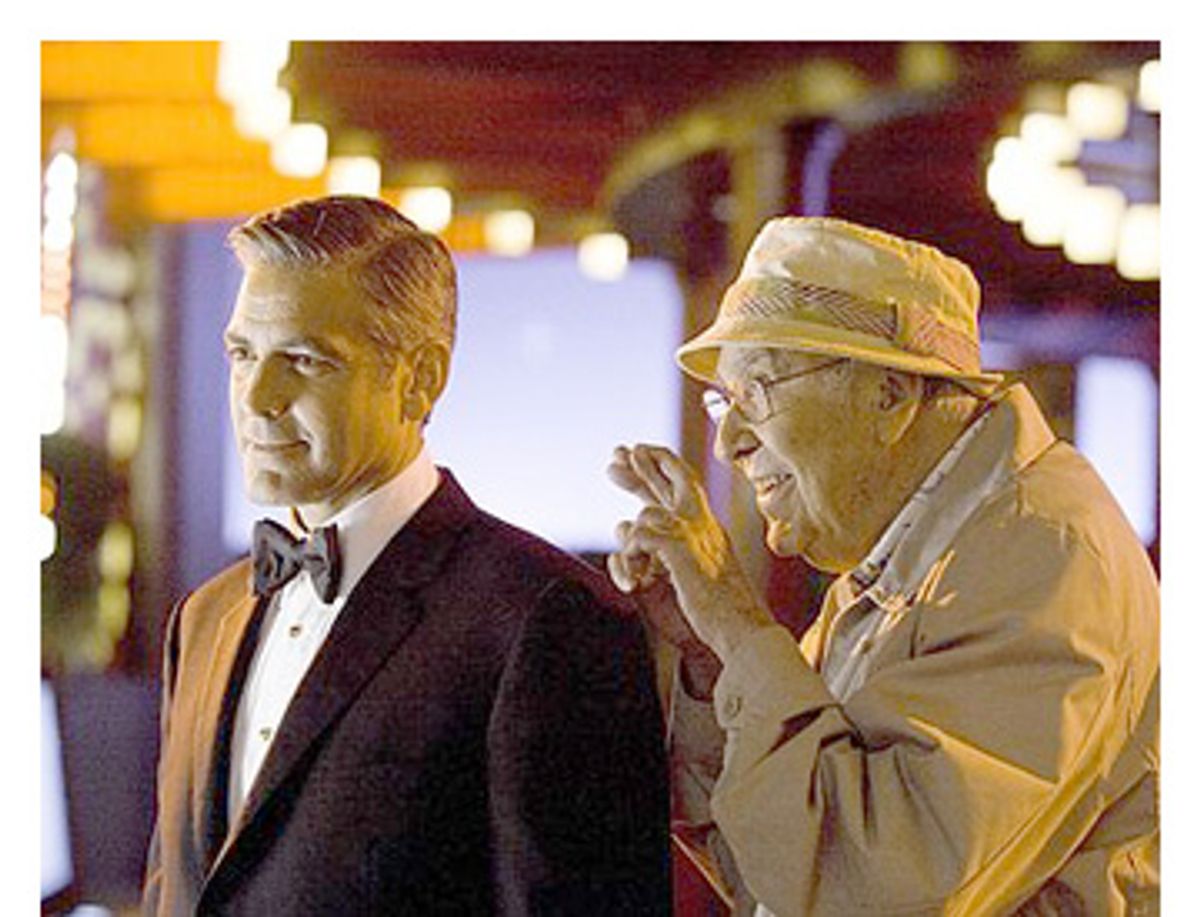 The one wholly believable and sensible precept in Steven Soderbergh's sequel to a sequel to a remake "Ocean's Thirteen" is that Elliott Gould -- once again playing the endearingly hapless Vegas business schmoe Reuben Tishkoff -- is a guy worth saving. Shortly after the opening of "Ocean's Thirteen," a heart attack lands Reuben in the hospital after he's bilked in a business deal by the crooked hotel magnate Willy Bank (Al Pacino). Danny Ocean (George Clooney) summons the rest of the gang from near and far, dragging them away from their various and sundry illegal activities, to wreak revenge on Willy -- and to rally 'round the bedside of the ailing, demoralized Reuben, sending waves of goodwill to hasten his recovery.

The rest of "Ocean's Thirteen" has a pleasingly casual, raffish quality -- it's enjoyable to watch, particularly if you've got nothing better to do. But is that really enough? The 2001 "Ocean's Eleven," the first picture in the franchise -- a remake of Lewis Milestone's iconic but not particularly good 1961 heist comedy -- was pleasurable for the way it grooved on style, treating it as rocket fuel, not merely fumes. In "Ocean's Eleven," the joy of watching Clooney -- one of only a few contemporary actors who has true, old-style movie-star glamour -- was enough of a draw by itself, but the picture around him was also clever, silly fun. I had a better time at the second installment in the series, the 2004 "Ocean's Twelve," than most people I know, who were bothered by the movie's overly insiderish tone. But I still enjoyed the interplay between the characters, even if 11 of them, let alone 12, are too many for one director to handle.

But with "Ocean's Thirteen," which Clooney has sworn will be the last in the series, the veneer is wearing irreparably thin. Once again, there are a zillion guys running around -- including Brad Pitt as Danny Ocean's right-hand man, Matt Damon as an eternally Boy Scoutish grifter, and Scott Caan and Casey Affleck as squabbling brothers -- and most of them just don't have enough to do. That's particularly true of Don Cheadle's Cockney explosives expert and Bernie Mac's -- wait a minute, what, exactly, does Bernie Mac's character do? In the previous pictures he was a safecracker. This time around, his big scene involves trying to sell a gaming table to Pacino's Willy Bank. If that's the best you can come up with for a marvelous comic actor like Mac -- the script is by Brian Koppelman and David Levien -- then it really is time to pass the dice.

Here, Ocean's 13 put their noodles to work to destroy Willy Bank's enterprise by clearing out his coffers at the gaming tables. They also want to prevent him from earning the "Five Diamond Award" review rating that every single one of his hotels has earned in the past. (Ocean's guys make sure that the poor awards inspector, played by David Paymer, endures a host of indignities, including being insulted by hotel staff and finding thriving colonies of cooties in his bed.) Those goals may seem modest but that doesn't keep the plot of "Ocean's Thirteen" from being excessively convoluted. Ellen Barkin shows up as Willy's barracuda-in-a-red-dress business associate, but her scenes are forgettable, even if her dress isn't. And although Pacino -- done up in a comically phony Sunkist-orange tan, and hair of approximately the same color -- appears to be having fun as he barks his way through this villainous role, the performance doesn't have much resonance: After he sends poor Reuben to his hospital bed, there isn't much left for him to do but stomp around like an ill-tempered hound dog.

"Ocean's Thirteen" is reasonably fun if you don't scrutinize it too closely. Clooney, as always, is fabulous to look at, although you may get through the whole movie only to find yourself hard-pressed to remember one significant thing he said or did (other than, perhaps, showing up at one point in a fake mustache and a '70s-style medallion-laden black turtleneck). The picture is certainly genial enough: There's nothing pinched or mean-spirited about it. And it's not giving too much away to tell you that Gould's Reuben, heartened by the way his friends turn out en masse to help him, makes a full recovery. Addled, sweet, a little nutty: As Gould plays him, Reuben Tishkoff is a guy worth saving. But it's time to send the Danny Ocean franchise out to sea, for good.