The public outrage over Paris Hilton's early release from her L.A. prison cell may be justified -- but why are we expending so much energy protesting the antics of a spoiled media whore? 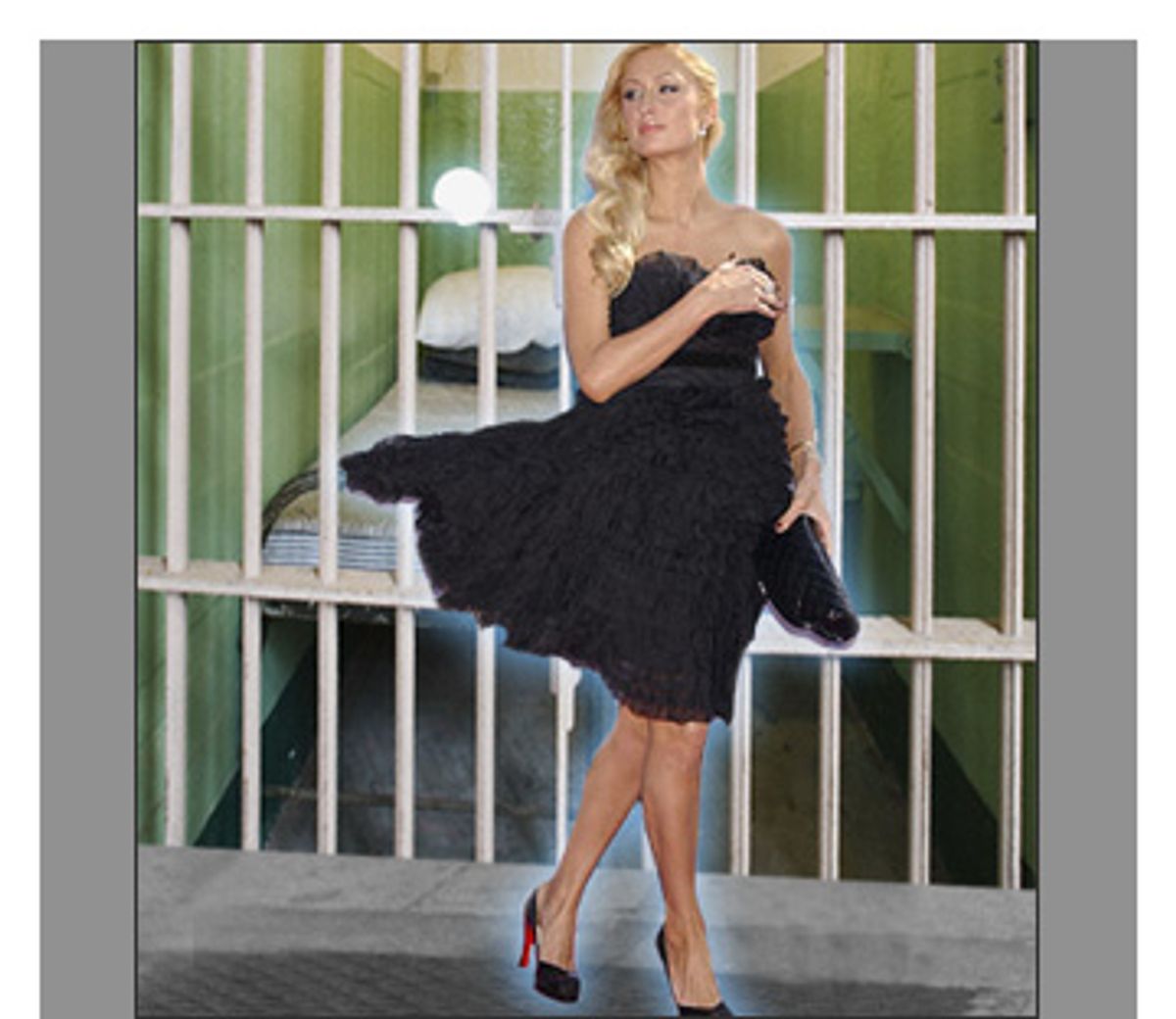 "There's nobody in the world like me. I think every decade has an iconic blonde -- like Marilyn Monroe or Princess Diana -- and right now, I'm that icon." -- Paris Hilton

"I hate reading! Someone tell me what's on this menu!" -- Paris Hilton

If Marilyn Monroe and Princess Diana were "candles in the wind," and Anna Nicole Smith was a bonfire in a hailstorm, Paris Hilton, for all her frailness and vulnerability, is a huge, flaming meteor that can penetrate the Earth's atmosphere, bypass all weather completely and destroy millions of lives wherever she happens to feel like plummeting.

Proximity to Ms. Hilton is a proven health hazard: She blows all the clothing, morals, inhibitions and self-control of her victims sideways, leaving them emaciated, dehydrated, broke, disoriented and immune to even the most powerful panty-biotics.

Paris has managed to hold herself together comparatively well during severe marathons of hard partying -- at least compared with the rest of her friends.

While Paris tiptoed around looking vacuous but relatively docile, La Lohan, Britney Spears, Brandon "Greasy Bear" Davis, Nicole Richie et al. sunk into binge-puking, Mercedes-totaling, infantile oblivions, involving willful and sustained refusal of all food but Vicodin, stints in inpatient rehabilitation facilities that cost $45,000 a week, and unsightly public meltdowns, leading to the consumption of more big bowls of cocaine and opiate painkillers and more trips to rehab (rehab being the new day care for shrieking Hollywood narcissists who can afford never to develop their own maturity, self-control or respect for other human beings).

While Paris is constantly derided for being stupid and whorish, she is, in fact, a post-Warholian pop genius of media manipulation: an extraordinarily talented infamy artist. In an information-saturated age, no publicity is good publicity, but there is enormous money to be made in disgrace. Fame is made of quantity of attention, not quality. More attention (positive or negative) means ... you win, even if you're incarcerated.

Today's outrage centers on La Hilton's release from prison, for the "medical condition" of galloping emotional feebleness brought on by advanced, drug-resistant wealth. The release was a tragic P.R. decision. As of the posting of this article, the ball, ridiculously, is still in the air. The sheriff's office is being held in contempt, and our general contempt for Paris is being held in check until some responsible grown-up is able to resolve this absurd morality farce.

She might have used this 23-day opportunity in the clink to become a black Muslim and great spiritual leader. Or write "Mein Kampf II: Bones for Blondie."

Or have a scorching lesbian affair with a fellow inmate, captured on a guard's cellphone ("The Banlieue Is Burning: One Night Just Outside of Paris"). She could have done crafts that would have sold for bajillions on eBay -- God's eyes, potholders. The missed merchandising opportunities alone are heartbreaking: Think of how much bank Martha Stewart made off of her Hard-Time Poncho pattern.

"What transpired here is outrageous," L.A. county supervisor Don Knabe whined to the Associated Press. Knabe said he received more than 400 angry e-mails and hundreds of phone calls from all over the country ... apparently from pathetic, boring, homely, forgettable, attention-starved losers with tragically uninteresting lives and nothing better to do than attempt to elevate their own labile self-esteem and moral superiority by vengefully pissing on Paris Hilton.

While much of America was getting its panties in a fist-size knot over Paris' lack of panties, there were plenty of other things we might have paid attention to. Lookie! The Iraq war! Presto! The "ongoing investigations" of atrocious, illegal acts committed at the highest levels of government! Instead, we are engaging in our new favorite dysfunctional love-hate relationship: Public stoning of the celebrity hooker.

When a starlet is enhanced by too many cocktails and breezy sexual sophistication, it makes her a target, because we get to regard her as indecent.

Nothing shows so well how unkind we are, as a society, than the way we report on our fallen women. Even the cool kids get in on it. At the MTV movie awards, Sarah Silverman remarked that the prison wanted Paris to feel more at home, so it "painted the bars to look like penises ... I'm afraid she's going to break her teeth on them."

David Letterman hurled his rock: "You know what [Paris' surveillance anklet] means for me? A lot of nasty scratches on my back."

The prevailing cultural trope of "Kill the slut" has claimed quite a few bodies over the years: Marilyn Monroe. Princess Diana. Anna Nicole Smith.

Linsday and Paris? Run for your lives.

Before the DUI, Paris was being talked about because she liked urinating in hotel lobbies and taxicabs and restaurant booths. This "outrageous" behavior didn't exactly make her go broke. Paris Hilton charges $200,000 to show up at a party for 20 minutes. This works out to $10,000 a minute to spend time with a woman whom you can't even sit with on the good sofa.

(Just to give this price tag some sense of proportion, in 2004 the average per capita annual income in Iraq was $422. So it would take the average Iraqi over 20 years to earn one minute with Paris Hilton, or around 24 Iraqis one year to divide and share that one minute with Paris between them -- which would just be a complete waste of money unless they could use that one minute to swallow all her jewelry and handbag and shoes.)

Paris has come to embody the angst of our increasing sense of powerlessness -- she's the blonde whom we punish, because we understand her crimes. We don't really understand all the crimes of the administration -- congressional bribes, organized mass deceit via domestic propaganda, policy fixing, violations of privacy and human rights.

Those are too legally complicated. While we were busy ogling Lindsay's drug binges, Janet Jackson's "wardrobe malfunction" and Britney's shaved head, our leaders larded us with misinformation, illegally invaded another country, murdered we-don't-even-have-any-idea-how-many innocent civilians (not to mention independent journalists), stole a nation's oil, tortured enemy prisoners, quietly bankrupted our economy and our international moral standing in service to the short con of military Keynesianism, effectively built Dick Cheney his own private Praetorian Guard, and ushered in the most serious threat to American freedom in our history: the very real threat of despotism.

God, that is depressing. Hooker! Where's the hooker? "If you put Paris in jail, you feel like you haven't been screwed by the Man," said a friend of mine. "If Paris goes to jail, there is still a middle class. There's still an illusion of hope. We're not the Philippines, yet. There's still some kind of justice, and we're not all just fucked."

You can kick the blonde all you want, but kicking the wrong ass, while momentarily satisfying, really won't make life better.