Paris isn't free -- and neither are we

Paris Hilton's strange celebrity hits a new nadir after Friday's chaotic perp walk. Will we ever be free from her now? 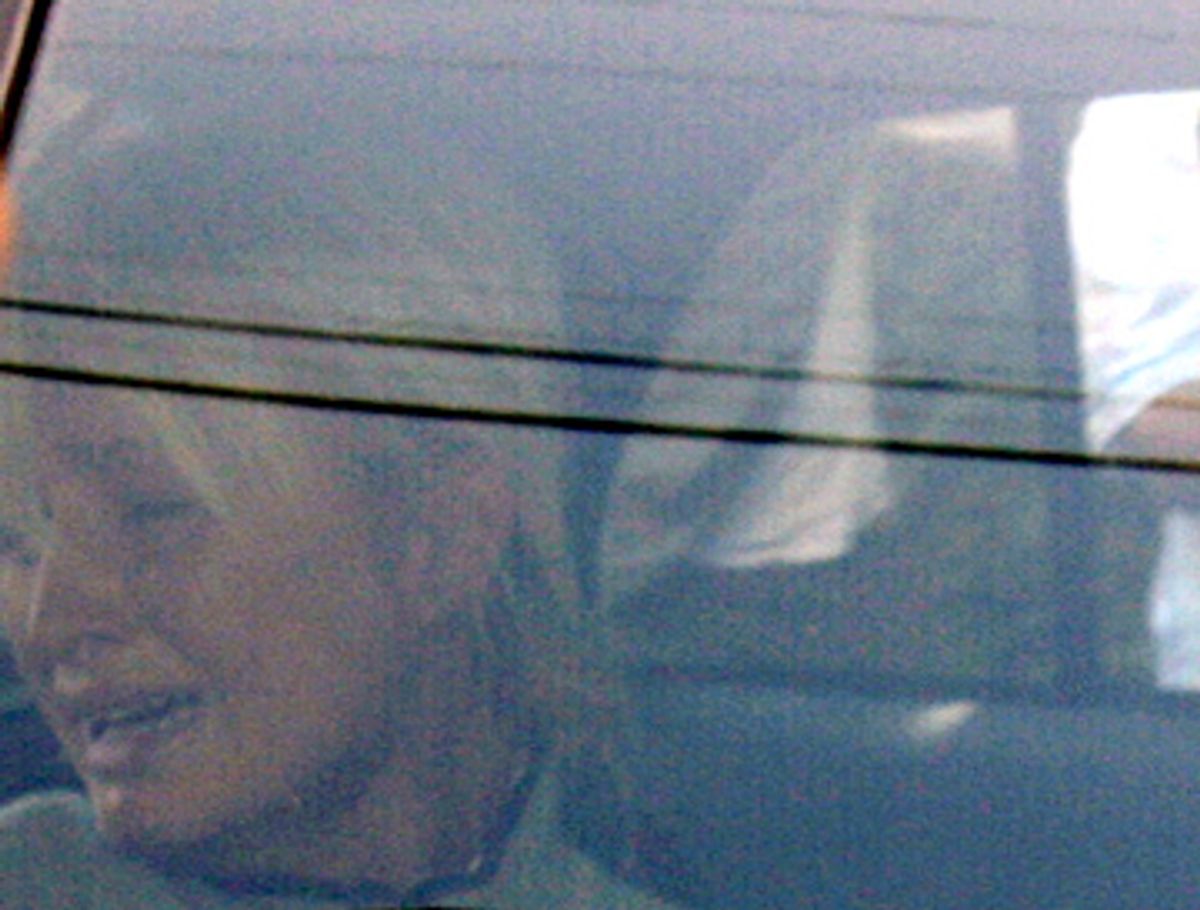 Resistance is futile. You can avert your eyes, cover your ears, change the channel and close your browser, but you can't escape the truth: Paris Hilton has become an omnipresent cultural icon, a symbol of the depravity of our times, and thanks to Friday's sobbing, O.J.-level arrest spectacle, she's destined to remain at the forefront of that rushing flow of global news until we're all old and gray.

Earlier this week, though, there was a glimmer of hope: As Hilton began her 23-day stint in a Los Angeles jail (a sentence that had already been reduced by half), a nation joined hands and solemnly prayed that prison might be the one thing that could convince Hilton to put away the party dresses, close the cellphone, retire the baby-doll voice, put down the apple martini and go home. Together, we dared to dream that the dark realities of life in the big house would teach Hilton, once and for all, not only that drinking while driving isn't just bad publicity, it's a crime that endangers innocent people, but that we're tired of her face, and we want her to finally have the good taste to do what so many criminals and porn stars and flashers have done before, once they've had their comeuppance: disappear. Surely, Paris Hilton had the money and the resources and the good sense, at long sweet last, to finally make herself scarce!

So when the news came out on Thursday that Hilton was released from jail and sent home with a house-arrest ankle bracelet, after just three days, due to an unspecified "medical condition" that many have speculated is her deteriorating emotional and mental state, a great cry of protest rose up from the land. Why?! When our prisons are filled with men and women serving time for their crimes, why should one pretty young heiress walk free?

A member of the prison's medical team told the New York Post that Paris was let go because she was on the verge of losing it: "She was crying a lot ... She's in lockdown for 23 hours. She was depressed." Ah, yes. As opposed to the rest of those in our nation's prisons.

From that point on, even the least interested among us, who had averted our eyes and begged the universe to spare us the latest details of Paris' incarceration, couldn't help perusing the gory details: OK! magazine reported that Paris, upon release yesterday, began planning a major house party for last night. A friend of Hilton's (who told OK! about the party) allegedly said, "Paris has had an awful five days in prison ... She wants to see her friends and have fun. She's been punished enough already."

A fellow inmate reported that Paris cried continuously in prison, and was repeatedly pressing her "medical alert" button, summoning guards. The inmate also claimed that Paris was eating officer-level food, not regular mess. Paris' parents reportedly planned to visit her in the slammer this weekend, but her aunt Francesca Hilton told Us Weekly that "now, we will have to have a party" instead.

But television-viewing, tabloid-consuming proles weren't the only ones recoiling at these latest developments. Judge Michael T. Sauer, who originally sentenced Hilton to prison and specifically noted that she should not be allowed work furlough, work release, house arrest or other fame-based dispensations, was apparently angered by the news of her return home. By Thursday night, he'd called for a hearing Friday morning. And when he heard that Hilton had arranged to attend the hearing via teleconference, the judge ordered the sheriff's department to pick her up.

Which brings us to another media spectacle, perhaps the finest hour of Hilton's "poor little rich girl" performance yet: Friday afternoon helicopter footage shot Hilton being led, in handcuffs, to a police car, while paparazzi snapped photos of her in the back seat, sobbing. "This has got to be one of the worst, if not the worst day, of Paris Hilton's life," the anchor of Headline News intoned, while trial attorney B.J. Bernstein reminded us, over and over, that Hilton was just the unfair victim of a power struggle between a judge and a sheriff.

And once Hilton's hearing was over and she was returned to jail, the news was even more grim. "Paris Hilton left the courtroom in tears, screaming for her mother," a Headline News anchor told us, solemnly. "It was not a pretty sight."

Even after years of watching Hilton direct the media like her own obedient little phalanx of winged monkeys, it would take a coldhearted cynic to doubt that Hilton was experiencing real pain and anguish upon returning to prison. At the very least, we were witnessing a coddled child having a severe allergic reaction to the real world. Hilton could certainly be losing her doughnuts in a medically authentic way, since by all appearances, she's never been punished, never been forced to eat anything she doesn't like, never had to sleep anywhere uncomfortable or wear anything unflattering. While the rest of us are more than passingly familiar with deprivations and things not going our way, Hilton could actually blow a fuse from what would look, to an outsider, like a mildly unpleasant experience. That pea under a stack of mattresses might not bruise you. But you don't sleep on 5 million-thread-count sheets, now, do you?

And when you consider the fact that she's protected by relatives who talk openly to the press about throwing a party to celebrate their insipid child being released from prison early after having driven drunk? It makes simple sense to assume that not only is she unapologetic for her crime, she's absolutely indignant about her punishment. The Associated Press reported that "as Ms. Hilton was led away to await her trip back to jail, she turned to her parents and said, 'It's not right!'" You almost have to feel empathy for the girl, dragged off to endure flavorless food and sleepless nights on scratchy sheets, all the while fancying herself a pretty blond Mumia Abu-Jamal.

Let's just pray that those bad prison sheets scratch her tender white ass enough to get her out of our faces for good. Because we certainly didn't ask for this, either. No matter how the talking heads and pundits have tried to convince us that Paris is a reflection of our shallowness and stupidity as a culture, most of us have never wanted her to be a symbol of anything. Is the crotch flash an act of subversion, in which Hilton channels the paparazzi to put her image on every cover, from tabloids to respected newspapers alike? Is Hilton, like her understudies Lindsay Lohan and Britney Spears, just a frightened child, overwhelmed and intoxicated by all of the attention the media gives her?

We don't care anymore. And now she's become a symbol of something that bestrides her like a colossus, the inherent inequality and corruptibility of the criminal justice system -- which only means that the insanity will never, ever end. Paris Hilton's image will appear everywhere, across the globe, her every word will be broadcast to millions, this person who never did anything, who never had a marketable skill or talent to show for any of it, and who's never, in her short life, had a single interesting thing to say.

Even pointing that out has become hopelessly clichéd, infinitely repeated, until no one remembers what's real and what isn't. The most outraged protest will only melt into a hopeless morass of punditry and reactionary pronouncements, floating into the digital abyss with the rest of the pop cultural detritus: a TMZ headline, a mug shot from the Smoking Gun, a pilfered phone list, a nasty exchange transcribed for Gawker.

We are powerless. All we can do is pray that one day, Paris Hilton will show mercy on us all, and go away.