Tales of the other Tony

While you were watching "The Sopranos," Broadway threw itself a big party ... well, maybe not that big. 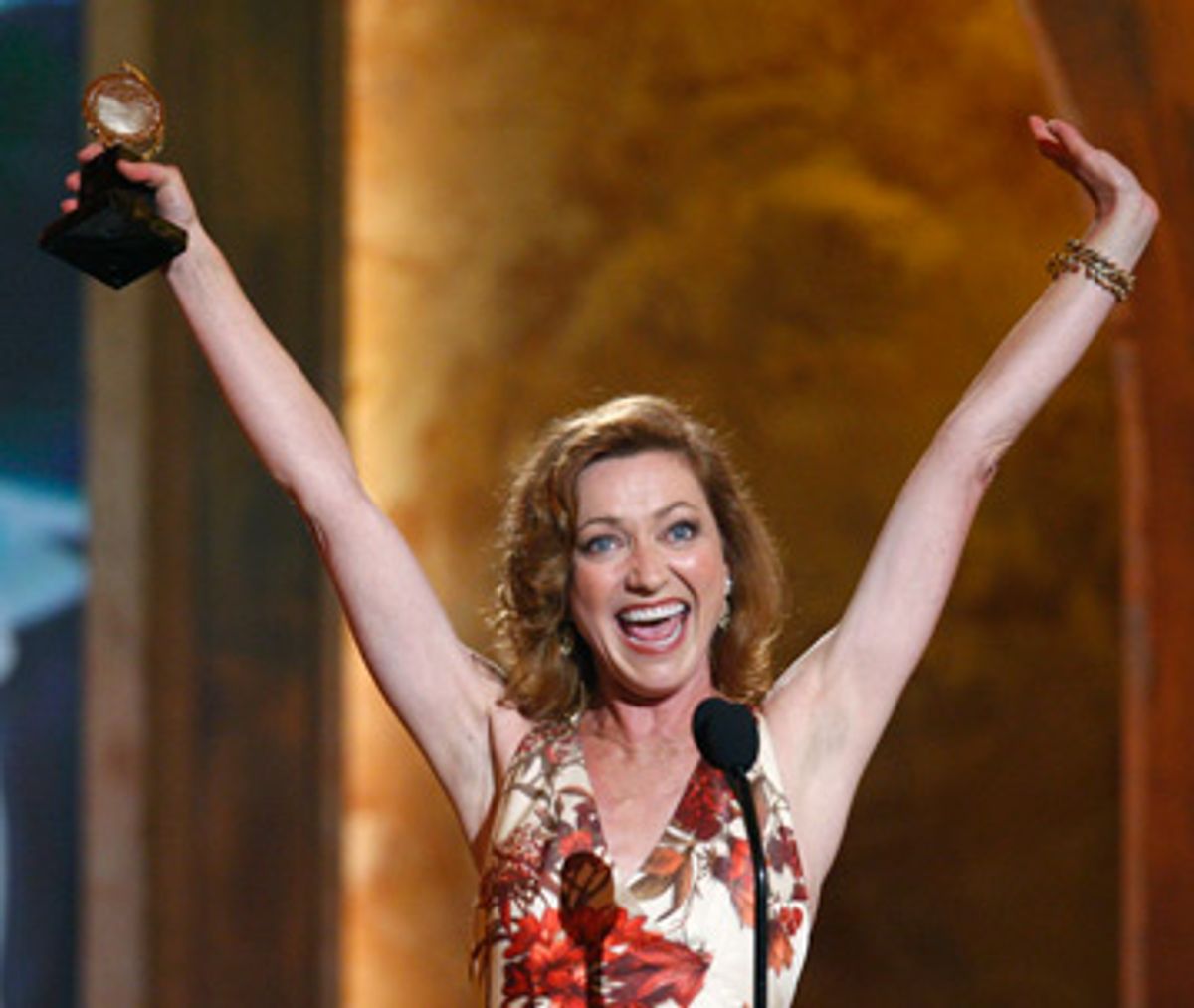 Crowds of beautiful people decked out in gorgeous clothing. Music. Dancing. Yes, one of New York's most vibrant communities threw itself an amazing party Sunday night. Unfortunately, the Puerto Rican Day parade was ending just as I was due to take my place on the Tony awards red carpet and await the arrival of luminaries like Donnie Osmond and Doogie Howser.

Bigger stars than Donnie and Doogie also strolled down the ruby rug, but the truth is, the Tonys, Broadway's big toast to itself, are a decidedly low-wattage event. For every star who strolls into Radio City Music Hall accompanied by a chorus of pleading and first-name calling (Liev Schreiber, Ethan Hawke, Felicity Huffman), there are two or three eager thespians who saunter down the carpet at a snail's pace, occasionally glancing over to the press gang with the hopeful look of dogs at the pound. Sorry, Xanthe Elbrick ("Coram Boy"), David Pittu ("LoveMusik") and Orfeh ("Legally Blonde: The Musical"): You haven't been in enough movies for earn the paparazzi's attention and you weren't in the night's big winners, the rock musical "Spring Awakening" and Tom Stoppard's "The Coast of Utopia."

Sam Waterston's furrowed eyebrows and gruff "No," in response to my question about whether he ever talks politics with presidential hopeful and fellow "Law and Order" castmate Fred Thompson made it plainly clear that Elbrick, Pittu and Orfeh weren't missing out on much -- the red carpet is no place for real discussion. But I did manage to learn that John Turturro, one of the evening's presenters, has the Spurs winning the NBA Finals in six games; that Justin Bond, a nominee for "Kiki and Herb: Alive on Broadway" and resplendent in lascivious red lipstick and a low-cut gown, thinks theater people are much more boring than music people; and, after some serious pressing, that "Spring Awakening" cast member Jonathan B. Wright only appears to be pleasuring himself onstage during the sexually charged musical.

Wright's "Spring Awakening" costar John Gallagher Jr. won the night's first award -- for his featured performance as the tortured, tragic Moritz. His victory turned out to be a good omen. "Spring Awakening," about the sexual coming-of-age of a group of German teens, took home eight awards, including those for best musical, best original score and best direction. That was one more award than the number earned by best-play winner "The Coast of Utopia," Stoppard's weighty trilogy about Russian intellectuals. But the seven awards earned by Stoppard's eight-and-a-half-hour behemoth set a record for most Tonys won by a play.

For a bunch of people who make their living onstage, the winning actors and actresses were a relatively staid group, as Frank Langella (best actor, for his complex portrait of Richard Nixon in "Frost/Nixon"), Jennifer Ehle (best featured actress in a play, "The Coast of Utopia"), Christine Ebersole (best actress in a musical, "Grey Gardens") and David Hyde Pierce (mild upset winner for his performance in the musical "Curtains") all offered demure, gracious acceptance speeches. Only Julie White of "The Little Dog Laughed," who beat out the likes of Vanessa Redgrave and Angela Lansbury for the award for best actress in a play, showed much spunk, calling the Tony voters "a bunch of wacky, crazy kids" and thanking her agent for never being venal and conniving "to my face."

If the onstage scene was mostly dull, backstage was even worse. Aside from the elegant Bill T. Jones, who won for his "Spring Awakening" choreography and who delivered some heartfelt words about the role of avant-garde dance on Broadway and the theater's difficulty in attracting young African-Americans, there was hardly a winner who gave more than the rote remarks about how great it is to win. It wasn't entirely their fault, though -- the questions lobbed their way were as fluffy and empty as the profiteroles and éclairs lining the complimentary media-room buffet table. But around the fourth iteration of "No, I didn't expect this; yes, my collaborators were amazing," I'd grown mighty envious of the fella to my left, who was watching reruns of "30 Rock" on his laptop.

Uber-clever "Utopia" playwright Stoppard briefly broke the fawning monotony with a gag about retitling a musical version of his play "Serf's Up," but it wasn't long before people whose names and faces I didn't recognize from shows I haven't seen went back to talking about why their production was a life-changing experience and the epic struggle to have it produced. By the time "Spring Awakening" capped the evening with its win for best musical ("This is the thing that's everyone talking about?" I heard a waiter mutter backstage during an on-air performance by the show's cast), I was only half paying attention. Instead my mind wandered out the window to the lights twinkling across the Hudson in New Jersey. Had Tony Soprano been whacked?