The photo-sharing site blocks users in Germany and several Asian countries from looking at "restricted" pictures. 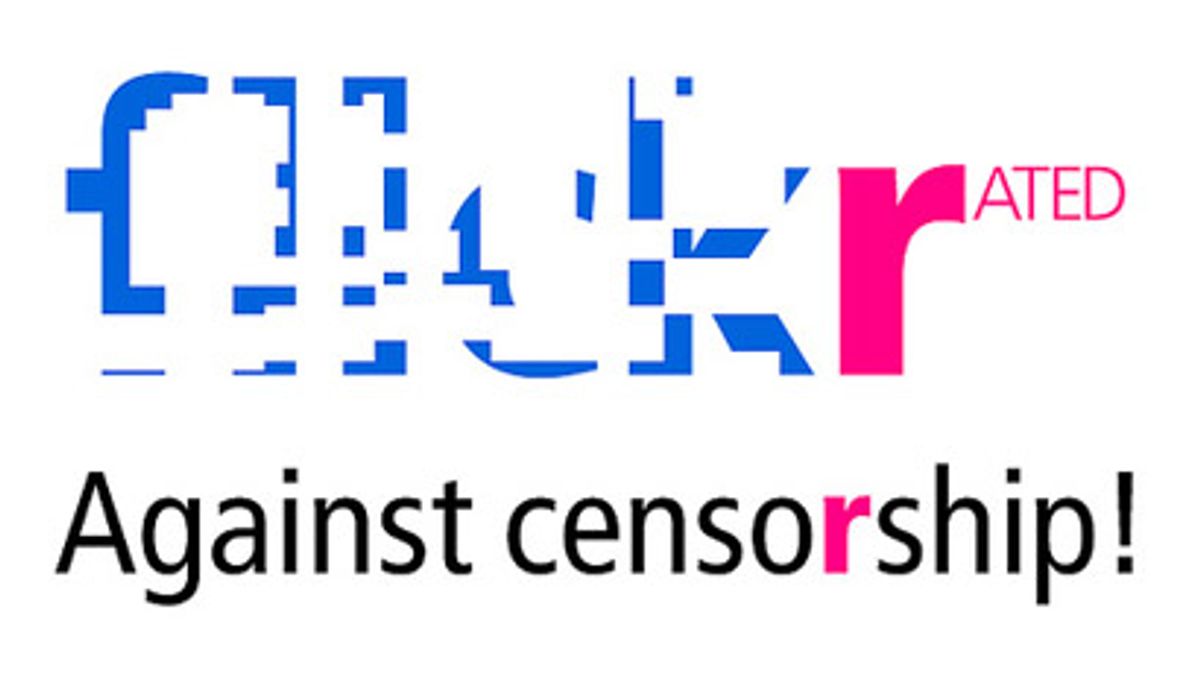 Flickr won't let people in Singapore, Germany, Hong Kong or South Korea look at photos of breasts, butts, backs, as well as Nazi symbols or other images deemed offensive in those countries. In the past few days, Flickr instituted a new "SafeSearch" policy that prohibits users in these places from turning off content filters. Why the company did it isn't clear; Stewart Butterfield, Flickr's co-founder, posted a couple messages on Flickr's boards that strongly hinted that the plan goes against Flickr's own wishes, and was instead pushed by Yahoo, Flickr's parent company. The explanation hasn't satisfied the Flickr faithful, who've been flooding the photo site with many quite creative examples of protest art.

Many blame the Flickr blockages on Yahoo's policy of satisfying censorship authorities in the countries in which it operates. In 2000, Yahoo was sanctioned by a French court for violating laws prohibiting the sale of Nazi memorabilia; now Yahoo, Google and other Web firms censor their sites in accordance with the Chinese government. Singapore, Hong Kong and South Korea have laws blocking various kinds of speech; Germany, meanwhile, strictly prohibits Nazi imagery, and courts there have ruled that they have the power to block non-German Web sites that display banned content.

In one of his posts, Butterfield explained that including Germany in the new filtering scheme was a tough call. "The decision came down to the wire, but we decided to include Germany," he wrote. "We're still hoping that that was the right decision. It definitely was not a decision that was made lightly and there is no intention to annoy, frustrate or inconvenience Flickr members in Germany."

The problem is not only that Flickr is now censoring images, it's that it's doing so quite indiscriminately. Every Flickr image can be tagged by users as falling into one of three "safety" categories -- safe, "moderate," or "restricted."

But a Singaporean's idea of "restricted" might very well be a German's idea of a fun way to spend the afternoon. Nazi symbols are blocked in Germany, but nudes -- well, nobody there has a thing against naked people! As a Flickr user named Remmy quite eloquently puts it:

The point is: I want to see the nudes! I want my nudes to be accessible to the ones who like to see them. Plain simple, this is my right. I know of no German law that would prohibit me from seeing any kind of nudity (of course except anything with children involved, this is out of question). Hell, I can see tits and asses and even an almost explicit presentation of sexual intercourse on public TV after 6 p.m.! There is no law that would prohibit this. And there is absolutely no need for Flickr to block all properly flagged "moderate" and "restricted" photos for users in Germany.

Butterfield responded to the storm with a rather cryptic message, one that suggested the decision was out of his hands:

Unfortunately I can't give a more detailed update yet or any concrete good news, but please don't take our silence to mean that nothing is happening. We are doing our best to make the situation better as quickly as possible. I'm sure it doesn't make a lot of sense from the outside, and we would prefer to be able to share all the context -- believe me, this is extremely uncomfortable and we'd *strongly* prefer not to be in this position -- but we don't have a choice at this time.

Again, we will post more as soon as we can -- in the meantime, all we can do is apologize.

The one winner in this story is Thomas Hawk, the CEO of Zooomr, the upstart Flickr competitor whose slogan is "No limit photo sharing." Earlier this week, Yahoo's shareholders rejected a resolution to adopt an anti-censorship policy at the company. On Wednesday, Hawk announced that he would adopt the same policy at Zooomr.

On Wednesday, Hawk was busy on Flickr's message boards, posting a few messages criticizing the company for its stance. And how did Flickr respond to Hawk's comments? According to him, the staff deleted his messages.