When it comes to relationships, the polyamorist motto is "The more, the merrier." Considering the sorry state of traditional marriage, is multi-partnering due a closer look? 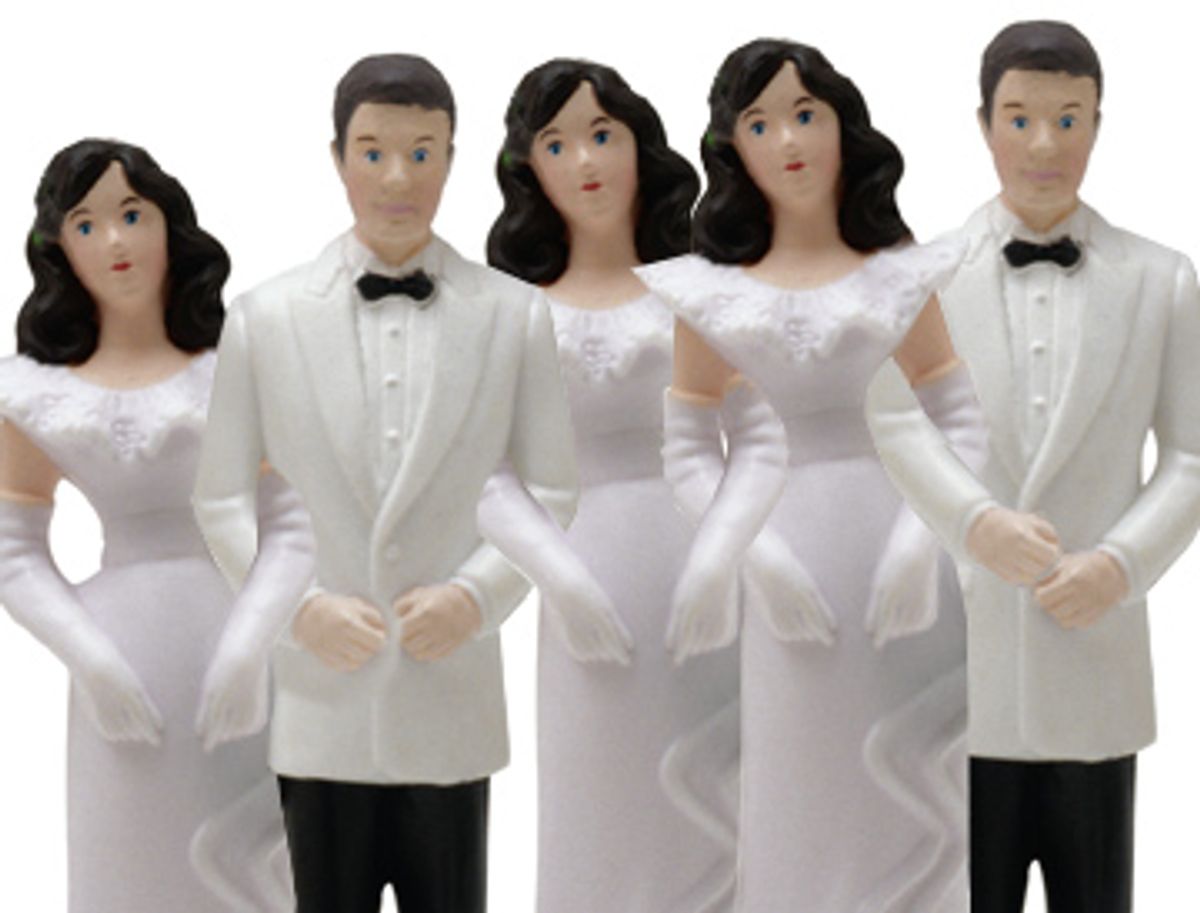 You may have seen a bumper sticker around town that says "Marriage =" and then, as if it was an elementary equation, silhouettes of a man and a woman. Traipsing through the wooded parking lot of the Pines Retreat Center in Brooksville, Fla., I notice a car with a different version of this bumper sticker: Instead of one male and one female, this one has three of each.

This is the Florida Poly Retreat -- "poly" meaning polyamory, "the state or practice of having more than one open romantic relationship at a time," according to Merriam-Webster Online. That means there's no such thing as cheating or affairs, because everything's out in the open.

Certainly it isn't for everyone. But considering the state of traditional marriage -- according to a recent New York Times report, in 2005, married couples became a national minority for the first time in history -- multi-partnering might be due a closer look.

"As I'm fond of saying, polyamory ain't for sissies," says Anita Wagner, a 54-year-old legal secretary and poly activist in the Washington, D.C., area, whom I spoke to on the phone before the retreat. Anita has a primary partner with whom she's in a long-term committed relationship; she also has another boyfriend and a girlfriend; her partner has two other girlfriends. As far as being able to sort out the details of their relationships without acrimony, Anita tells me, "I'm very proud of us."

Cherie has been involved in two quads, the first in 1992 before she even knew the term "polyamory." It "wasn't something we went looking for," she says ("we" being she and her now ex-husband) of the intimacy that developed between them. The second quad, which started in 2000, bought a house together. "It turns out mortgage companies like having four people with incomes" to sign the paperwork, she says. That quad eventually split into pairs, but different pairs than it started with (it gets complex). Currently Cherie lives with her partner Chris Seeder and has two long-distance sweeties, Fritz Neumann and Franklin Veaux.

Cherie's quad experience, she says, "really caused me to think about what marriage is and why it didn't fit in my life."

"Relationships grow and change," and, she explains, "when you feel you're very secure in your relationship ... then having sides, swings, relationships and romances aren't threatening to that primary relationship."

Besides a disinclination toward monogamy by those who practice polyamory, it's difficult to characterize it in a simple way because of the various forms a relationship can take: no partners, one partner, five partners of varying sexes who may or may not live with you. "There is no poly lifestyle," Franklin says at the round table when I use the term. "That's like 'the monogamous lifestyle.'"

As for who practices poly, Robyn Trask of Loving More, a polyamorist association and magazine, offers me a survey her magazine did in 2002 of 1,000 poly practitioners (who, given their lifestyle, could conceivably be speaking for another 4,000). The survey found the following: 40 percent of the poly population have graduate degrees or higher (as opposed to 8 percent of the general population). Most were raised Christian (87 percent) but identified as pagan (30 percent). One-fifth had never married; one-fifth had been divorced. And only 49 percent were sexually involved with someone they described as a love interest.

That last figure would seem to undercut the easy assumption that polyamory is all about sex. It's safe to assume some poly relationships are more geared toward the sexual -- as some subset of all relationships are -- but where poly seems to veer away from simple "swinging" is in a greater willingness of participants to take on a new partner as a whole person, messy emotions and all. Though there are many ways to practice poly, the one that treads closest to the monogamous model seems to be "poly fidelity," or sexual faithfulness to a group of partners -- what one person at the Florida conference explained to me as "expanded monogamy."

Janet Kira Lessin and her husband, Dr. Sasha Lessin, of the World Polyamory Association in Maui, call their circle of seven partners a "pod" and its members ... "podners." Their poly practice includes a spiritual level: "We really emphasize the interpersonal synergy that occurs when you include other people in your personal definition," Sasha Lessin says, "and using the relationship to transcend the separate self sense."

"They can still be with us in other ways," Sasha says, but until they clear, they're outside the condom-free circle. A recent St. Petersburg Times story featuring Cherie Ve Ard reported that when she finds a new romantic interest "she sends him a 'sexual history disclosure spreadsheet,' complete with names of partners, the types of sexual contact they had and the results of tests for sexually transmitted diseases. Ve Ard expects the same in return."

This is the part where some people start to think: "This sounds like a lot of work." All relationships require maintenance and also practical considerations, like health insurance. Cherie goes as far as to advise poly groups to form limited liability corporations in order to be covered as a business. And then, of course, there's the inevitable jealousy. People in open marriages aren't impervious to it; they just learn to handle it differently.

"In the monogamous world," Cherie tells me, "jealousy is usually handled at the trigger point. It's assumed that your partner isn't going to flirt with other people." Poly people don't get the luxury of being on romantic autopilot -- if a partner's flirtations upset them they have to think about why. It means a lot of self-assessment.

Nan Wise, a New Jersey sex therapist and relationship counselor who identifies as polyamorous, sees the jealousy and new relationship energy -- that twittery feeling of finding someone new, which your primary partner might not have if they're not also in a new relationship -- as one of the biggest banana peels poly relationships can slip on. Our bodies release a chemical when we're in that initial love stage -- PEA or phenylethylalanine -- that Nan calls "a chemical speedball." "Do not operate machinery in this state," she says.

And the idea, I'm told at the round table, is definitely not to just add more people when a relationship is rocky. One person says you have to be "very aware of what your poly-saturation point is."

When I first meet Carli she is in the throes of a breakup. Married to a man for 14 years, she became involved with Susan 10 years ago and the couple became a trio. Then Susan decided she wanted out. "I know that I am and have been grieving," says Carli. "But I love these two people, with all their warts and wrinkles." Her sadness doesn't dull her wits. Lean, tan, warm and extroverted, Carli is one of those women who can carry on a perfectly sensible conversation while all the time the eyes in the back of her head are always on her kids.

In Carli's case there are about six of them. Two are hers, the others are members of the co-op school where she works three days a week. It's the women at the co-op she considers her community. At one point she tried a local poly support group in the Central Florida area, but, she says, Susan kept getting hit on.

Two months after we talk on the playground at her school, Susan is back in the picture -- and though Carli's clearly happier, the vibe is different. "I don't think I'd be sexual because I'm very conscious of the whole STD thing," she says, aware that Susan might be getting involved with someone else. Having done volunteer HIV education, she's skittish of trusting anyone's word on their sexual history. Susan still comes and stays overnight once a week, so for the kids, things are kind of back to normal. They missed Mommy Susan, as they call her (Carli and her husband are just Mommy and Daddy), but always knew she had her own house.

If the prospect of multiple partners seems troublesome, the subject of multiple partners with kids around can be even stickier. Robyn Trask, who has three children, says that she has known people who have lost custody of their children as a result of their poly life. The ideal, she says, would be to get more social workers and therapists to see that "[polyamory] is like any kind of family, but it has more people in it."

At the Florida retreat round table, Trask points out that the nuclear family is a relatively new invention. In bygone days it wasn't unusual to have several generations or extensions of family under one roof. In that way, polyamory can also be seen as a throwback to a time when big households were the norm.

Take the Tell family. Miriam and Rebecca became involved 10 years ago, but expanded their relationship in 2005 when they "married" a third partner, Robin, and took the new last name Tell. When I call their Albany, N.Y., home, I interrupt them in the practice of singing arpeggios with their 1-year-old daughter, Nadia. "She can't actually sing the notes but she imitates the emphasis," says Miriam, Nadia's birth mother. When Robin, her dad, tries to get her to sing for me, 900 miles away, she just looks at the phone.

"We've joked that people are going to say, 'How do people do this without three [parents]?'" says Miriam. As a freelance writer she was able to work at home, staying with Nadia until she was 8 months old. But by January her business was picking up. At that point, Robin had a job he wasn't crazy about, so he quit to watch Nadia. Now Robin has found a dream job, so Rebecca is stepping away from her position as a case manager at a homeless shelter to stay with the baby -- which will be good practice, as it turns out, since the current plan is for Rebecca to carry the next child.

The Tells are aware that their lifestyle is exotic to outsiders and Miriam is bemused when I ask what the sleeping arrangements are like. "We have a massive king-size bed in one room and a twin in the other and we just kind of shuffled around," she says. Sometimes one person wants more attention; sometimes another wants more space. "I think people are always concerned about it because they think there has to be some underlying angst and competition -- and that's just not there. Sure we've had our fits of angst but not particularly around that issue."

They have given plenty of thought, though, to how their unusual arrangement will affect Nadia. "Our social circle has a lot of parents and one triad so ... we're glad she's going to have people she can talk to about having three parents," Miriam says. As for how Nadia herself might react later on, Miriam says she'll handle any potential rebellion the same way she handles a lack of understanding from anyone.

"We always start off acknowledging that we know this is weird, we know this is unusual ... but when you come and see our family it's not that different from yours. We have chores, we have a mortgage, we cook dinner. We try to get our daughter to bed and sometimes she doesn't go to bed when we want her to," she says, with an occasional chirp from Nadia in the background. "Really, our day-to-day lives are pretty unremarkable."