"Sopranos" finale an act of genius? Fuhgedaboudit! Great art may provoke us to the point of violence, but our favorite TV shows shouldn't. 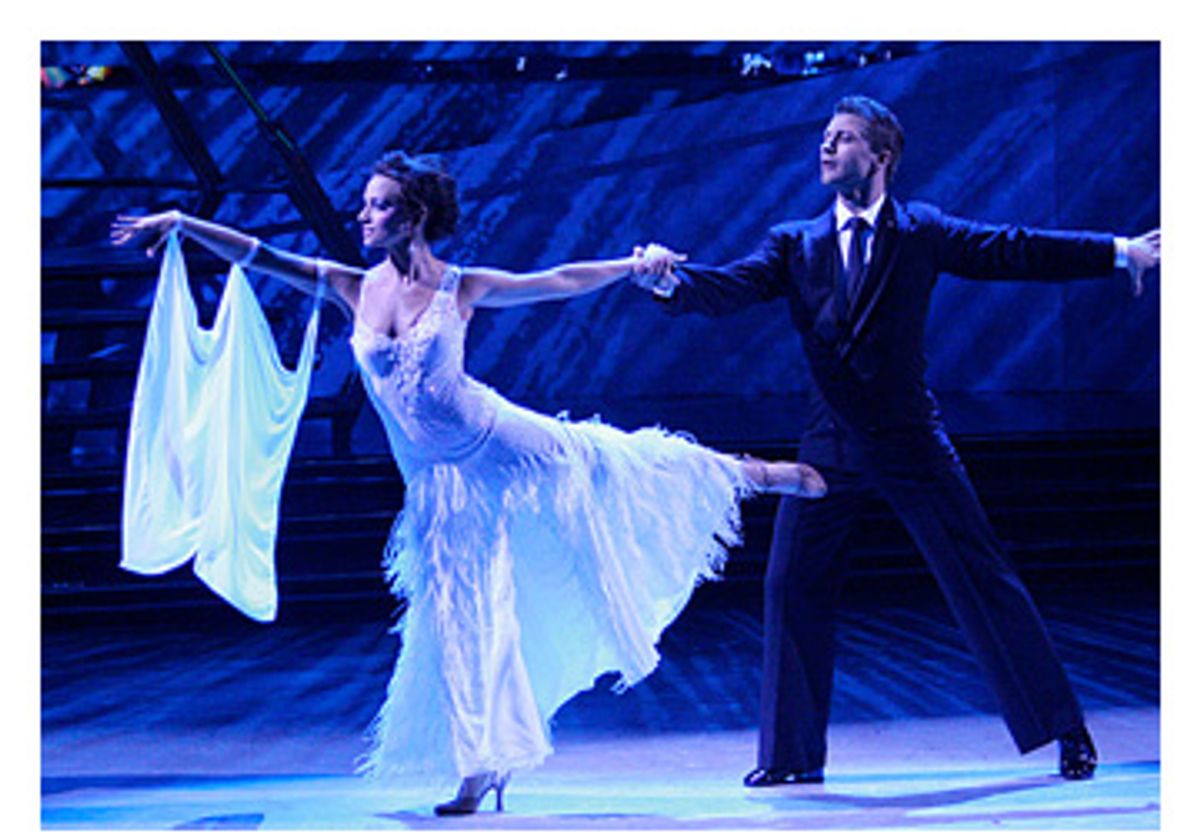 Tens of thousands of rioters filled the streets of Jersey City Sunday night to protest "The Sopranos" creator David Chase's ambiguous ending. Rioters threw bottles and large platters of baked ziti, and then began overturning cars and setting SUVs on fire, shouting "It's all a big nothing! It's all a big nothing!"

By Monday morning, the country had plunged into a nihilistic downward spiral, and productivity was down 35 percent nationwide. "Seven years I watched Tony Soprano do his thing, and for what?" said Minneapolis lawyer Sal McAllister, "All he is to me now is some asshole bully."

Demonstrators stormed the HBO offices, looking for "that drunk" Chris Albrecht, certain that Sunday's finale was all his fault. Other angry fans read and reread David Chase's interview with the Newark Star-Ledger, looking for some hint of what he intended with such an alarmingly incomplete ending.

Meanwhile, the country's intellectual elites delighted in the outcry, since it clearly meant that they were, once again, better than everyone else. Rallying to Chase's defense, critics and know-it-alls declared his ending "brilliant in the way it captures the torturous, open-ended nature of the human condition." Janice Smellnicore of the Boston Morning Herald raved, "First, we wondered if our satellite dish was malfunctioning. Then we wanted to brain David Chase. In short, we felt exactly like Tony Soprano! Bravo, Mr. Chase! Your act of subversion is, at the very least, not lost on this perceptive critic!"

Embarrassingly, I have now watched the episode three times. I am fascinated by the fast-growing conspiracy theories. The speculation so far:

I think the end reflected the anxieties Tony feels all the time: He or his loved ones could get wiped out anytime, not just because he's a mobster, but because he's a regular suburban American guy who could get capped, or blown up by terrorists, who has kids who are bad parallel parkers and cross the street without looking. In the Star Ledger interview, Chase talked about the "terrorists" that Tony turned in and said, "That was sort of the point of it: Who knows if they are terrorists or if they're innocent pistachio salesmen?" -- which I thought was sort of the point of the whole last scene. Anyone you see might be a menace ... or not.

Thanks for all of your legwork! I would've watched the last episode a few more times, too, but I was busy overturning cars and setting stuff on fire.

It was a rough couple of days. One minute you're polishing off a big plate of spaghetti in front of the last episode of one of your favorite shows ever, the next minute you're out on the streets, pulling people from their vehicles and beating their faces in. I guess that's what David Chase wanted, ultimately -- to show us that a rough beast lurks within every man, not just within Tony Soprano.

And I have to admit, once I stopped crushing things and weeping inconsolably, I started to think about how it feels to be David Chase. It can't be all that fun, creating a pop cultural colossus so impossibly huge and omnipresent that it blots out the sun. Imagine just one day of the rest of Chase's life: the jackasses and humorless mouth-breakers out there, stopping him on his way to his favorite deli, wanting, needing to know why he sent Tony to prison, or had him rat, or killed him off. Can't you feel his pain? OK, try to ignore the fact that he's unwinding in his luxurious villa somewhere in the French countryside right now. Money doesn't fix everything, people. Just look at Tony Soprano.

And hey, I'm all for ambiguity, all for thwarting audience expectations. You don't have to be up to your pencil neck in art films to appreciate a little subtlety. Of course we should've known, after the first slow half of this season, that Chase wouldn't be pandering to his audience's needs, not for a second.

Plus, even though this show started as the story of a mobster seeing a shrink, I heartily support its quest to become too big for its own britches. Chase set the bar higher and higher, exceeding our expectations in countless ways. I'm happy to give him the benefit of the doubt. He earned the right to end his story any damn way he pleased.

We, in turn, earned the right, over the course of eight long years, to think whatever we want about his ending. Personally, I think his ending sucked.

Of course, now we know that it looks like Chase intended to suggest that Tony got whacked at the end. The guy who played Agent Harris, Matt Servitto, told the New York Post that the final scene originally ended with the menacing Members Only guy approaching Tony's table.

This last bit of information made me want to start weeping and crushing things again. Why oh why did Chase cut that last shot? I had started to make peace with the notion that Tony was simply on edge, fearing for his life, and that he was doomed to spend the rest of his life the same way, taking his Communion onion rings and silently saying "Amen" as he dodged bullets and evaded prosecution and lived to see another day. He was just like us, living in a dream world, chowing down on fried crap, listening to Journey while the apocalypse loomed.

Instead, we were supposed to get that Tony was killed? So then, why didn't we get it? I noticed that the music ended on the word "Stop," I knew it wasn't a technical malfunction, but I still didn't have any clue what had happened.

I can't help feeling that the relentless references and mob clichés were manipulative and, frankly, beneath Chase, at least in terms of creating the last scene of the entire series. Why undercut the scene with sly bullshit or even an elaborate mystery? If it's just another moment, then make it just another moment -- make that beautiful. If we're seeing the end of it all, then make that clear. The combination of references and ambiguity and then the black screen and silence -- I think he tried to do a few contradictory things at once, and it was a failure. He undercut himself -- created something dramatic, then pulled the rug out from under it, and in the end, it felt like a practical joke. The experience wasn't engrossing or enlightening or even powerful; it was just alienating.

That can't be the point. I don't care what his intentions were -- his goal couldn't have been to take people out of the story and make them check and recheck their TiVos and the digital cable boxes. And don't talk to me about how people booed Beethoven and couldn't stand Van Gogh. This isn't some dadaist experiment -- it's a mob show, for God's sake! Even if it's a great crime drama, or a true work of art, it shouldn't end with what's perceived as a technical difficulty. It's not consistent with the visual and narrative paradigm that we've experienced over the course of six seasons.

Yes, I know: Art is designed to provoke us! The more violently we're provoked, the more brilliant the art is! But this isn't a painting, or a sculpture, or a piece of music. This isn't a two-hour film. This is a show on TV, one that many of us have watched for eight years running. We've been made to expect payoffs all along. Whether Chase has screwed with our heads or not along the way, there were always some satisfying conclusions at the end of each season. To give us one thing for eight long years, and then suddenly get all artsy on us and turn the lights out? That's a bad call, plain and simple.

Sure, people are talking about the fact that Chase is covering his ass so he can make a movie, but that's too cynical even for me to buy. No way do you build the last scene of your legacy around the promise of future payola.

"The Sopranos" will go down in history as a truly great, groundbreaking TV drama, of course. This last scene won't change that. But a clear ending would've been nice, if only to put an end to the rampant speculation and predictions that have dominated any discussion of the show for the past few years. That was going to be the saving grace of this last episode, no matter how it ended, wasn't it? To shut everyone up, once and for all, about the escaped Russian or the fact that Sopranos "sing" or every other theory in the book? Ultimately, the problem with Chase's ending was not that it confused most people, but that it gave those who can't tolerate confusion (or consider themselves above it) an excuse to inform us of what we saw on Sunday night, whether it was a brilliantly executed nod to the mob genre, a truly provocative choice that will keep us angry for years ("That's the beauty of it, dude!"), or just a clever way for Chase to hedge his financial bets.

Why, just today I got an unsolicited 2,000-word manuscript in my e-mail that clarified everything: The finale actually ended with Holsten's exploding in a spectacular, fiery terrorist blast, killing everyone. The first sentence? "I think I might be the only person who was not particularly confused by the finale of the Sopranos this Sunday."

Don't stop believing, my man. You keep filling that void. But pass the onion rings first, will you?