Mister Fantastic, Invisible Woman, the Human Torch and the Thing return in this ambitious second film in the "Fantastic Four" franchise. 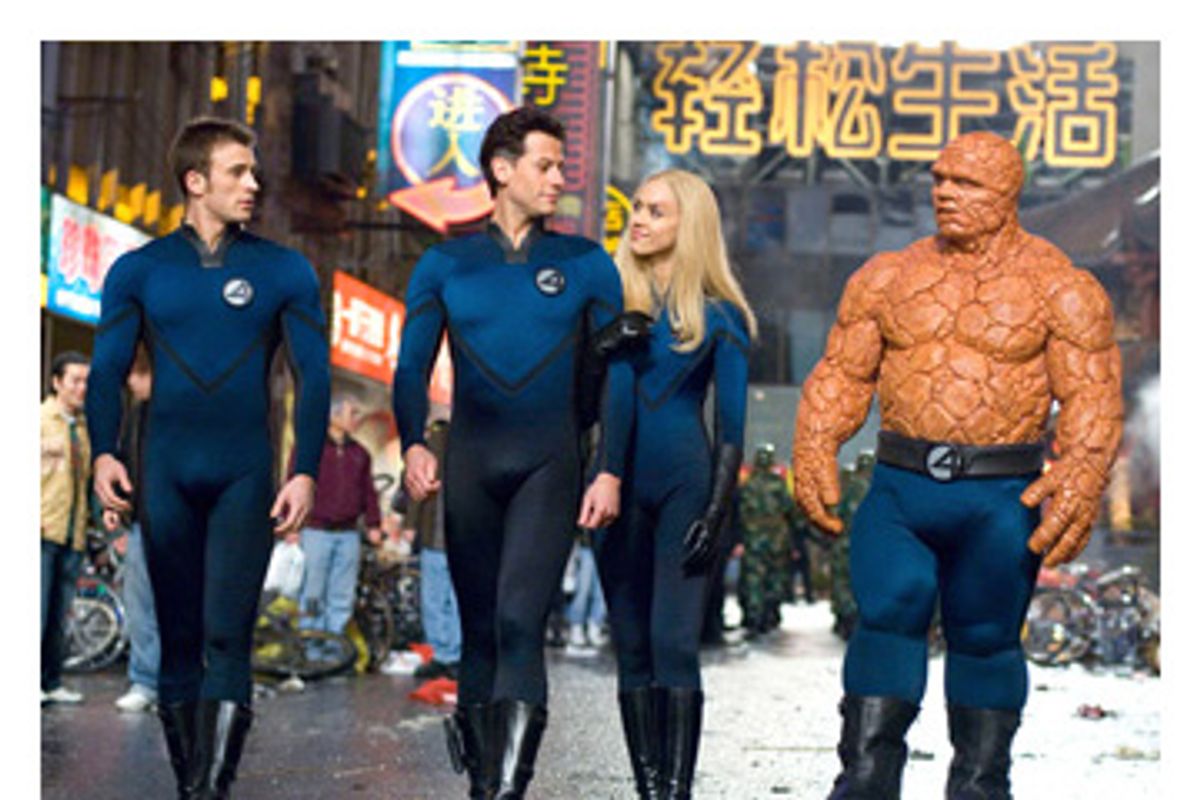 Over the past few weeks, I've heard lots of grumbling from diehard Fantastic Four fans about how much they hated the 2005 "Fantastic Four," chiefly because they believed it didn't do justice to one of the great comic-book series of all time. They seemed to be waiting for "Fantastic Four: Rise of the Silver Surfer" with a mixture of dread and anticipation, probably because the Silver Surfer -- created by Stan Lee and Jack Kirby in 1966 -- holds a special place in the hearts of Fantastic Four fans. A complex, conflicted counterculture hero rendered in silky-sleek art deco lines, the Silver Surfer skims through the air on a surfboard capable of making the universe's cosmic energies all wiggy-waggy. He's a reluctant servant of a malevolent being named Galactus, and he has been sent to Earth to prep it for its destruction. But his nature is far from destructive, and he ends up betraying his boss -- he's a kind of cosmic conscientious objector, a highly enlightened beach bum whose impulse is to preserve, not destroy.

"Fantastic Four: Rise of the Silver Surfer" -- like the first picture, it was directed by Tim Story -- is more ambitious than its predecessor. It's also more cluttered and less fleet: The light, pleasingly casual quality of the first picture has evolved into something forced and metallic. As the film opens, Reed Richards, aka Mister Fantastic (Ioan Gruffudd), and Sue Storm, aka Invisible Woman (Jessica Alba), are planning their wedding. Johnny Storm, aka the Human Torch (Chris Evans), Sue's brother, is alternately trying to get Reed to concentrate on his upcoming nuptials (he knows how much the wedding means to his sister) and distract him: He and Ben Grimm, aka the Thing (Michael Chiklis), drag Reed off to a raucous bachelor party, which gives the excessively flexible groom-to-be the chance to unwind and stretch out, quite literally, on the dance floor.

But disaster strikes just as Reed and Sue reach the altar. The four superheroes have to find a way to counteract a mysterious force that has been wreaking havoc on Earth. The guy behind all the meshugas is that slick cat in the gleaming sterling skin.

The plot of "Rise of the Silver Surfer" is tangled and convoluted; if you aren't already familiar with the mythology, you may find yourself lost early on. (The script is by Don Payne and Mark Frost, from a story by Frost and John Turman.) This new story doesn't add any new layers of complexity to the relationships among the four main characters; the dramatic conflicts between them feel forced and manufactured. Even so, "Rise of the Silver Surfer" isn't complete torture to sit through: There are a few amusing moments (including an encounter between the Thing and a grumpy bear, who meet face-to-grouchy-face in the Black Forest) and a Stan Lee cameo that adds a dash of sweetness to the picture.

And the Silver Surfer himself -- largely a CGI creation, although the man behind him is Doug Jones -- is mesmerizing to watch. He looks something like the Oscar statue done up in silver rather than gold, or a futuristic chrome hood ornament. His muscles are taut and sculpted; his package is chastely Ken-like. (The picture is rated PG.) This killer bod speaks in a voice both dignified and mournful, provided by Laurence Fishburne, and it has just the right amount of gravity. "Fantastic Four: Rise of the Silver Surfer" features some special effects that try hard to be epic, including a scene in which the River Thames is drained down to a dry, parched hole. But the Surfer himself, ambiguous, tortured and principled, is the best effect by far. He moves with grace and beauty, and when he's on-screen, he adds just a little more light to the movie around him.