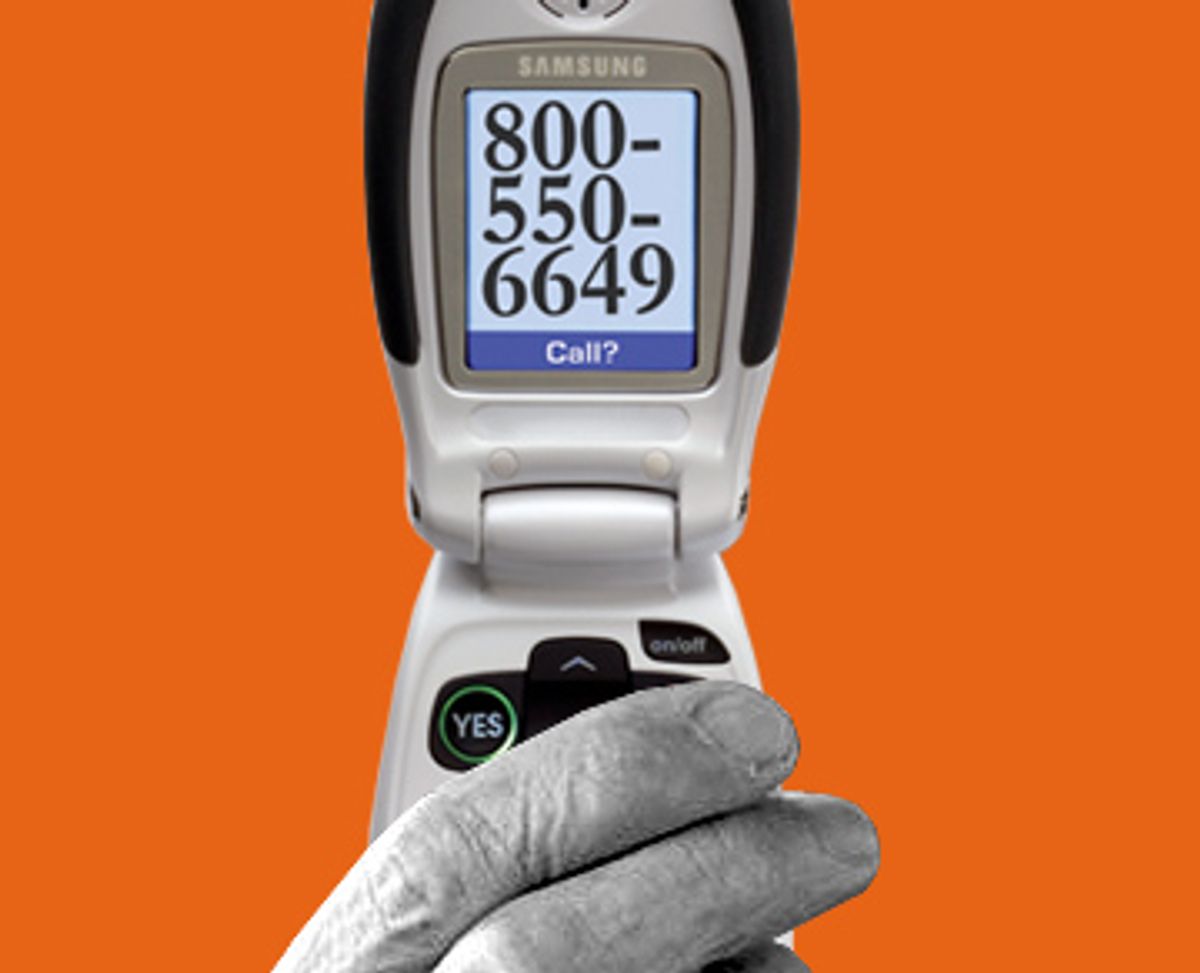 The young tech writer approaches the Jitterbug phone like he approaches a slice of grandma's meatloaf: apprehensively, but with a bit of curious hope, too, as the old lady is wise, and who knows what thrills are to be found in exploring her tastes? The apprehension does not quickly wash away, either; the young tech writer is a vain sort, and the Jitterbug, a phone designed to appeal to grandmas, grandpas and tech-fearing boomers, projects a certain dowdiness that the writer fears is adverse to how he prefers to roll. Here is a phone that's only a phone; it dials, it rings, it collects voice mail, and that's all. Yet despite the limitations, as he begins to use the thing, the young man feels slowly seduced. A phone that's only a phone, so old-school it even has a dial tone. Is this what he's been missing all along?

The Jitterbug is a big, curvy, face cream-colored device that Arlene Harris, a veteran telecom exec, dreamed up in response to what she calls a vital social need. It sometimes seems like everyone has a mobile phone, but there are millions of senior citizens, Harris says, who are too scared either to pick one up or to derive much satisfaction from the phones that their sons and daughters have given them. Many millions of younger people, too, yearn to be free from phones that do a whole lot -- the phones do e-mail, they do the Web, they take pictures, they keep a calendar. But they end up doing nothing very well.

It may be possible to find a mobile phone, today, that you really love, but I don't know anyone who's encountered such bliss. Most of the cheap ones on the market -- and cheap is what most of us want -- are more a pain than a pleasure. Jitterbug addresses the problem by going for radical simplicity -- a strategy that has proven successful in music players (the iPod), and in video games (the Wii), and could perhaps be just as big in the market for mobile phones.

The Jitterbug's simplicity begins with thoughtful industrial design. As it sits flipped closed in your hand, the phone feels like a throwback to the cells we were using around 2001; at 4.4 ounces, it's slightly heavier than alternatives you'll encounter in stores today, and it's got fat, inviting edges that are comfortable in a closed palm (the phone reminded me of OXO's Good Grips kitchen equipment). Flipped open, the Jitterbug looks even bigger still. The numbers on the dial pad are shockingly, comically large -- you can make them out from 5 feet away, and when I passed the phone around to other people, nearly everyone chuckled a bit when opening it up.

Most cells on the market today seem to be aiming for sexy; to say that a phone is "sexy," indeed, is probably the highest compliment you might pay its designer. The Jitterbug is the opposite of sexy. Its roundedness is cute, but it's a chaste, playful cute -- more like the VW Beetle than the BMW Z3, or like Drew Barrymore rather than Angelina Jolie. This is not a look for everyone, of course. When I asked Harris what the phone says about its owner, she used the words "elegance" and "comfort," which seem right, but not quite complete: I'd add "frumpish," too, and if you're the sort of comer whom friends might secretly call "finger guns," this is not the phone for you.

But this speaks to what's so unusual about the Jitterbug. Unlike most phones, the Jitterbug is quite clearly concerned with function over aesthetics; it's for people who want a phone for what it does, not for what it says about you. Flipped open, the phone stretches from your ear to your mouth. Most other phones go only half as far -- hold the phone to your ear and its mouthpiece reaches your cheek. Modern microphones are good enough to pick up speech from this distance, but people who've spent long lives speaking into land lines find the position unnatural -- they often move the small phones back and forth from their ears to their mouths, Harris says. A smaller phone is sleeker, but the bigger handset feels more like a phone should.

For similar reasons, Harris added a feature to the Jitterbug that I've never seen on a cellphone -- a dial tone. The tone serves as a sign you're getting a cell signal; instead of counting cell bars, you flip open the phone and put it to your ear to quickly check if you can talk where you are. I found the tone a bit unsettling; I didn't get its purpose until Harris explained it to me. But I can see how older people might feel differently -- on a land line, a dial tone tells you your phone's not dead, so why shouldn't it be the same on a cellphone, too?

Talking on the Jitterbug will feel radical for anyone used to more modern mobiles, but that's only because it's been so long since we've had phones this limited. I can describe the experience of using the Jitterbug in two words: dial, talk. Harris points out that in the late 1990s, most cellphones worked just this way. What's happened since then is what most people call "progress" -- computer chips got smaller and faster, and cellular networks got fatter, capable of carrying much more than voice conversations. But this sort of progress, she says, resulted in a glut of terrible phones. To justify building faster networks, cell operators now cram phones with tons of features most of us don't need. They want to sell us ringtones, they want us to trade pictures, they want us to download movies and music from our phones -- all this activity juices mobile operators' revenue, but at the same time, it ruins the simplicity and elegance of the phones' main purpose, talking.

As I write this, another company is on the verge of offering up an innovative product that promises to solve just this problem. Apple wants to revolutionize the mobile experience with a device that does everything -- e-mailing, surfing and talking -- beautifully. Even if Steve Jobs can pull off that trick, Arlene Harris points out that not everyone wants to do everything. Some people want to do just one thing: They just want to talk. The iPhone starts at $499, with a two-year contract, and what everyone expects will be a high-priced monthly data-plan. The Jitterbug costs $149, with service plans starting as low as $10 a month. Talk, as they say, is cheap.

Correction: An earlier version of this story claimed that Jitterbug service plans start "as low as $20 a month." In fact, Jitterbug offers an "emergency use" pay-as-you-go plan for $10 a month. Under this plan, you don't get any free monthly minutes; instead, for $25, you can buy a bundle of 100 minutes which last for a whole year. The cheapest plan that includes minutes is $20 a month; for that price, you'll get 60 minutes per month of talk time.