God forbid Steve Carell should keep pouring his comic talents into brain-dead heart-warmers like this. 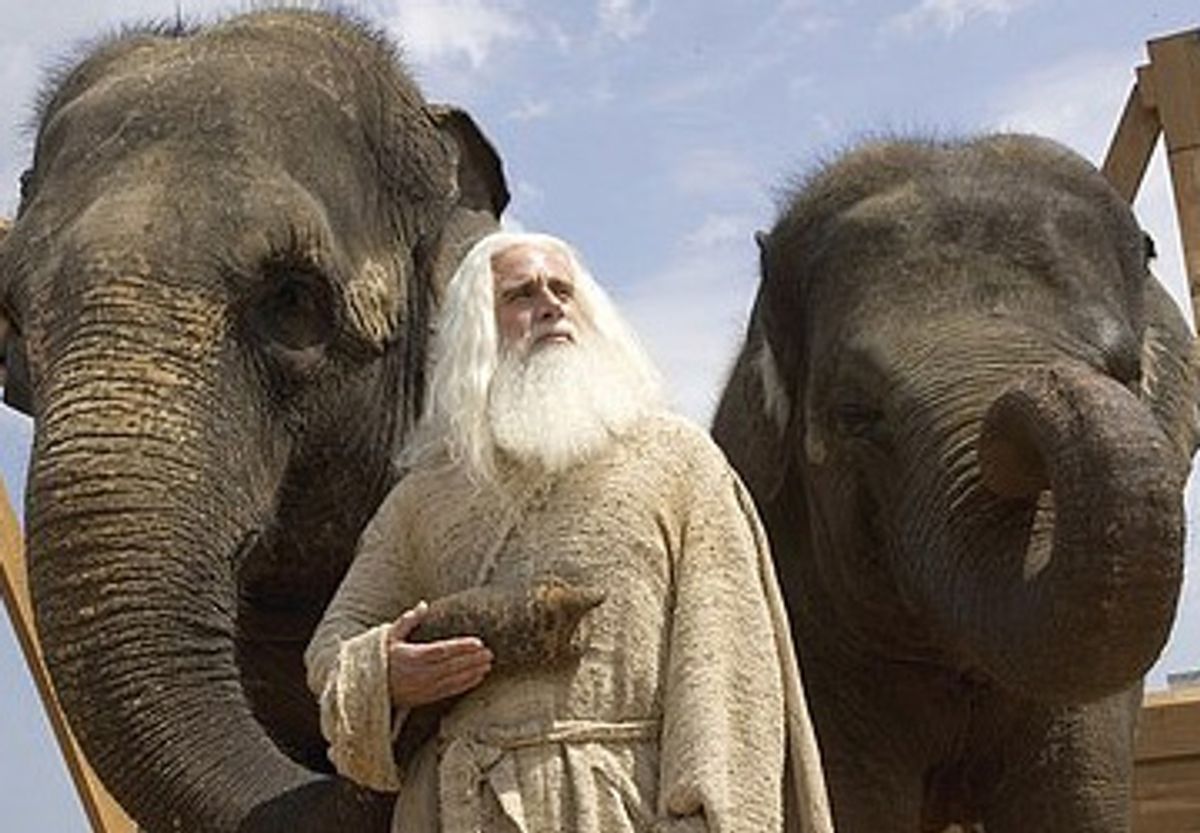 In the summer of 2005, with the release (and surprise success) of "The 40-Year-Old Virgin," Steve Carell seemed poised to be the savior of movie comedies. With his alert, slightly sharp features, and the kind of toothy smile that could belong to a cartoon forest creature or a TV newscaster, he was a guy we could trust not to go soft.

Or so we thought. In "Evan Almighty" Carell is on the fast track to becoming Robin Williams, a guy who lost the plot far too early on and began pouring his considerable comic gifts into brain-dead heart-warmers. "Evan Almighty" is Tom Shadyac's follow-up to his 2003 "Bruce Almighty," in which Morgan Freeman's God grants exclusive powers to Jim Carrey's frustrated TV reporter. In "Bruce Almighty," Carell played newscaster Evan Baxter, and he reprises that character here; now he's a newly elected congressman who has just moved into a boxy-luxe Virginia tract mansion with his wife, Joan (played, with "Get me out of here" resignation, by Lauren Graham), and we can see from the start that his ambitions have already made some dangerous tears in the fabric of his family. Her face beaming with optimistic wonder, Joan remarks to him, just as the two are getting into bed on the first night in their new house, that earlier in the evening one of their sons had "asked if we could all pray together" -- even as John Debney's score, a sofa painting rendered in comforting, inspirational-sounding flutes and woodwinds, tootles its barely subliminal message of "The family that prays together stays together."

Suddenly, the heavens opened, and I received a message of my own, beamed down direct from my own personal Mount Olympus: It was the voice of Preston Sturges, one of the great gods of American comedy, telling me, "Build your own ark and paddle your ass the hell out of there." But part of my earthly mission is to sit through these things so others don't have to. And so I persevered, suffering through this dawdling story of how Evan is called upon by God (once again played by Freeman, in a series of outfits ranging from grown-up first Communion suits to creamy-white cricketing costumes) to build an ark and to become a better person. Pretty much in that order.

For a movie that's supposed to be about reconnecting with God and ourselves, and cherishing the Earth we live on, "Evan Almighty" is a surprisingly dispassionate picture: It's limp and milky, a soft, dull little thing whose jokes hit with a dispiriting plop. (The script is by Steve Oedekerk, who also wrote "Bruce Almighty.") Once in a while, we get glimpses of a potentially brilliant visual idea: Early on, Evan begins to notice that animals -- cats and birds, snakes and tarantulas -- have started gravitating toward him, always in pairs. At one point, in the office of a crooked congressman (played by John Goodman), Evan settles onto a couch behind which looms a giant aquarium, and the fish inside zip over en masse to scrutinize him with their big, fishy eyes.

But Shadyac can't treat the image as a fillip; he has to work it over until its charm has been fully crushed. (Similarly, at one point the camera points squarely at an old small-town movie palace marquee that reads "The 40-Year-Old Virgin Mary," lingering on the in-joke long enough that any 4-year-old in the audience would have time to sound the words out.) I'd hoped the animals, at least, would provide some amusement or wonder, but they're mostly relegated to the background. In fact, they're barely present at all: Most of the animal gags in "Evan Almighty" involve hearty splats of bird poop falling from above.

Evan, at first reluctant to build that ark, starts sprouting unwanted (and unshaveable) facial hair; when he tries to leave his home in his usual business attire, God makes it clear he wants Evan to wear the robe instead. Eventually, Evan becomes his humble servant -- but actually, he's more like a hostage. Carell brings nothing to this role other than a stock catalog of dumbstruck expressions and flat, beatific smiles. One of the wonderful, vital things about Carell as a comic actor is that he does look a little crazy -- his everyday, nice-guy qualities are tempered, and enlivened, by the possibility that he could, at any minute, tip over into insanity. But here he has the bland focus of a Moonie. In a late scene, when Evan -- now fully transformed into a storybook-Bible Noah, with flowing burlap robes and a studiously ungroomed white beard -- beams with so-called love at his family and his gathered constituents, he's a little too Jim Jones-like for comfort. "Evan Almighty" is clearly designed to be a sweet little movie about the importance of doing God's work on Earth. To that end, let's light a candle to save Steve Carell from the career that's being carved out for him.