Hitting a wall on immigration

A weakened President Bush and a narrowly divided Congress may be about to miss the chance to help solve the dilemma of 12 million illegals in America. 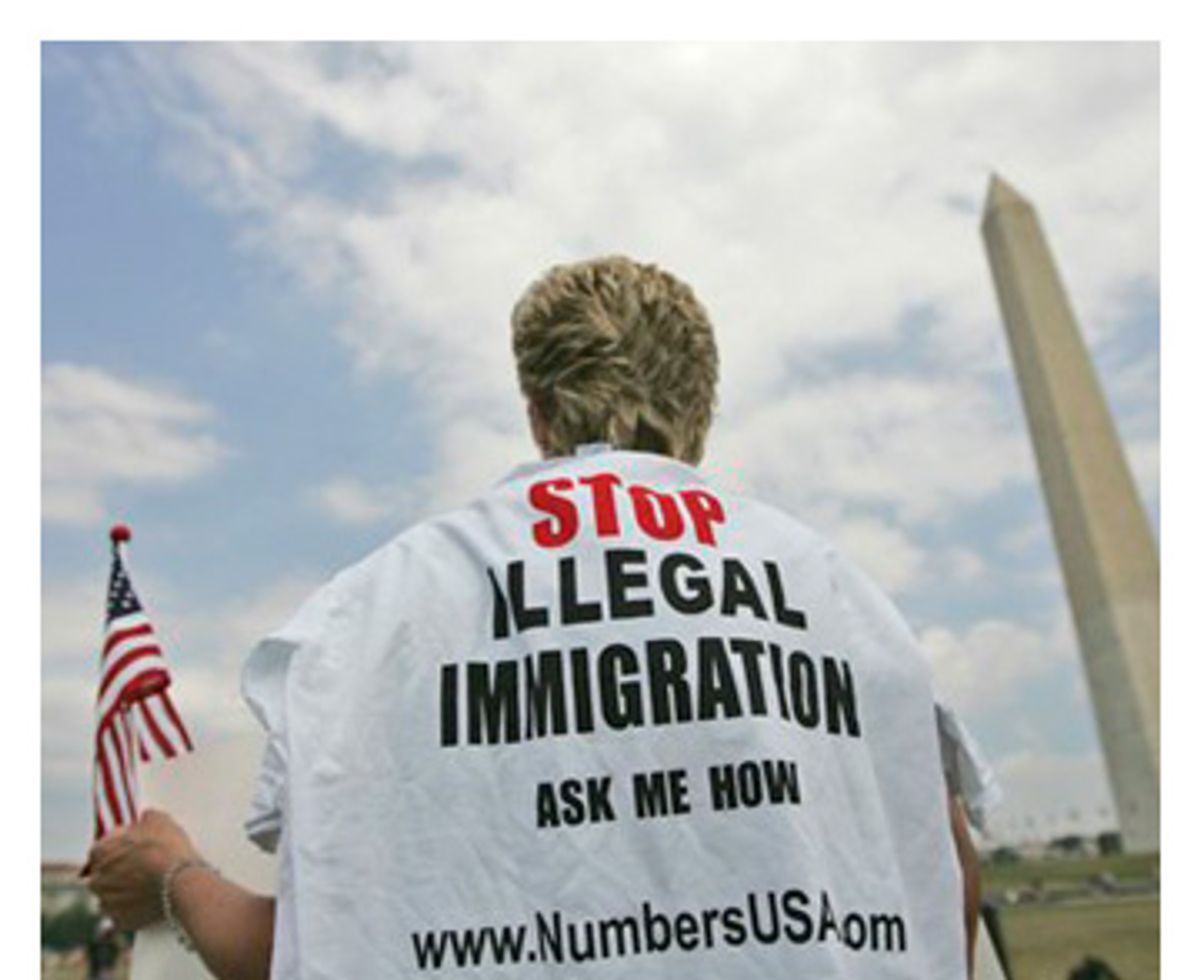 Around lunchtime Tuesday -- as busboys without legal visas and dishwashers without work permits brace for restaurant rush hour -- the Senate will vote on the fate of all those who live in the shadows fearing an immigration raid.

Unless there are 60 votes to stave off a conservative Republican filibuster, the immigration bill, which has already been through one near-death experience, will be formally interred in the legislative cemetery for the remainder of the Bush administration. Buried with it will be the hopes of finding a path to legality and eventual citizenship for the estimated 12 million immigrants residing in the United State illegally.

Against the backdrop of scorched-earth 21st-century politics, a legislative compromise like the immigration bill is an anachronism, a time capsule akin to the 1957 Plymouth Belvedere recently unearthed in Tulsa. Six years into the George W. Bush presidency, it is difficult to imagine that the White House would find itself allied with the congressional Democratic leadership against an angry social-issue uprising on the right. But immigration reform may be remembered by liberals as that rare entry in a tiny ledger titled "Bush's Good Deeds."

Even if Tuesday the Senate Republicans produce the roughly 20 votes needed to join with 40 Democrats in ending a filibuster, the battle to pass this landmark immigration legislation will be far from over. The Senate will then skirmish over nearly two dozen amendments (many of them designed to be punitive to immigrants) before voting Thursday on whether to shut off a second attempt at a filibuster. That will set up the Senate to approve the bill Friday night before Congress recesses for its Fourth of July break. Then, over the summer, the entire gauntlet will begin again with the House attempting to pass its version of the bill.

But already the immigration bill is weighed down with questionable provisions. The legislative compromise -- worked out by a bipartisan team that included Ted Kennedy and John McCain -- authorizes a new temporary-worker program that would permit foreigners into the country with no hope of permanent residency or citizenship. The bill also veers away from the time-honored principle of family reunification in granting visas for immigrants. Instead, the legislation sets up a difficult-to-decipher "point system" in which would-be immigrants get credit for various laudable attributes (such as an advanced degree or the ability to speak English), a Rube Goldberg scheme that troubles both high-tech employers and immigrant-rights groups.

Even now, at a still-early stage in the legislative sausage-making process, the bill is already a mishmash. A punitive amendment that may be adopted on the Senate floor would require those wanting to legalize their immigrant status to return to their home countries within two years before being permitted to return to the United States. A second so-called touch back is already mandated in the bill for immigrants who want to become citizens.

So on the eve of the first make-or-break test vote in the Senate, it is tempting to wonder about the haste to pass immigration legislation now, with a narrowly divided Congress and a weakened president. With the passions raised by right-wing talk radio and anti-immigration TV zealots like Lou Dobbs, there would appear to be a robust argument for waiting for a more opportune moment to attempt to liberalize the nation's immigration laws.

But this calculus does not take into consideration the larger symbolic stakes in this week's battle on the Senate floor. If the immigration bill fails, the anti-immigrant right will claim a major victory and ratchet up their rhetoric about sealing the border. As Simon Rosenberg, the president of the New Democratic Network who has championed the importance of the Hispanic vote for Democrats, puts it, "For the good of the country, it would be important for us to pass immigration reform to prevent us from going through two more years of divisive, racist rhetoric."

In theory, conservative resistance on the immigration issue may cost the Republicans vital Hispanic support in both the presidential campaign (McCain is the only GOP contender supporting the bill) and the 2008 congressional elections. National polls have consistently found that a majority of voters back giving illegal residents of the United States a path to citizenship, though the notion does lose support when it is labeled "amnesty." Moreover, an NBC News/Wall Street Journal poll earlier this month found that only 13 percent of those surveyed believe that deporting illegal immigrants is "a realistic and achievable goal."

All four Democratic presidential contenders currently in the Senate (Hillary Clinton, Barack Obama, Joe Biden and Chris Dodd) support ending the filibuster and are expected to vote for the final bill. And early indications suggest that the Democrats are likely to gain a few Senate seats in the upcoming elections. Would not a more liberal bill emerge in 2009 if there were a Democratic president and a somewhat more sympathetic Congress?

Janet Murguía, the president of the National Council of La Raza, makes the case against waiting until after the presidential election. "Our worry and our concern is that a new president would not see immigration as a top priority," she says. "It will be a very polarizing and difficult issue. And the fight isn't going to get any easier as we go along. I would think that any presidential candidate -- whatever his or her public position on the issue -- would really hope that the whole thing would be solved in this Congress."

Tamar Jacoby, a senior fellow at the right-of-center Manhattan Institute and a zealous advocate of immigration reform, offers a similar assessment. "The chances of getting a bill in 2009 are risky at best," she says. "They don't take up health-care reform, they don't take up Social Security every year. And the votes probably won't be there unless you suddenly have 60 Democratic senators." Jacoby also raised the specter of an anti-immigrant backlash: "The economy could go sour, we could have a terrorist attack. Who knows?"

It's hard to believe that in the end, it all comes back to the political possibilities raised by Bush's presence in the White House. Only a Republican president can call on party loyalty to bring with him enough potential GOP support for a liberalized immigration bill to make its way through the Congress.

If the immigration bill goes down to defeat Tuesday (and no one is making confident predictions either way), it will be another sign of Bush's diminished status as a president only a mother (Barbara Bush) and Dick Cheney could love. It would be ironic if the unpopularity of the Iraq War cost Bush his only chance to pass liberal social legislation. And it would be tragic if the fallout from Bush's failures deprived those 12 million people without legal visas of a chance to build new lives free of fear.