Why the iPhone matters

Everything you've always wanted to know about Apple's new phone, and why it could change your life even if you don't buy one. 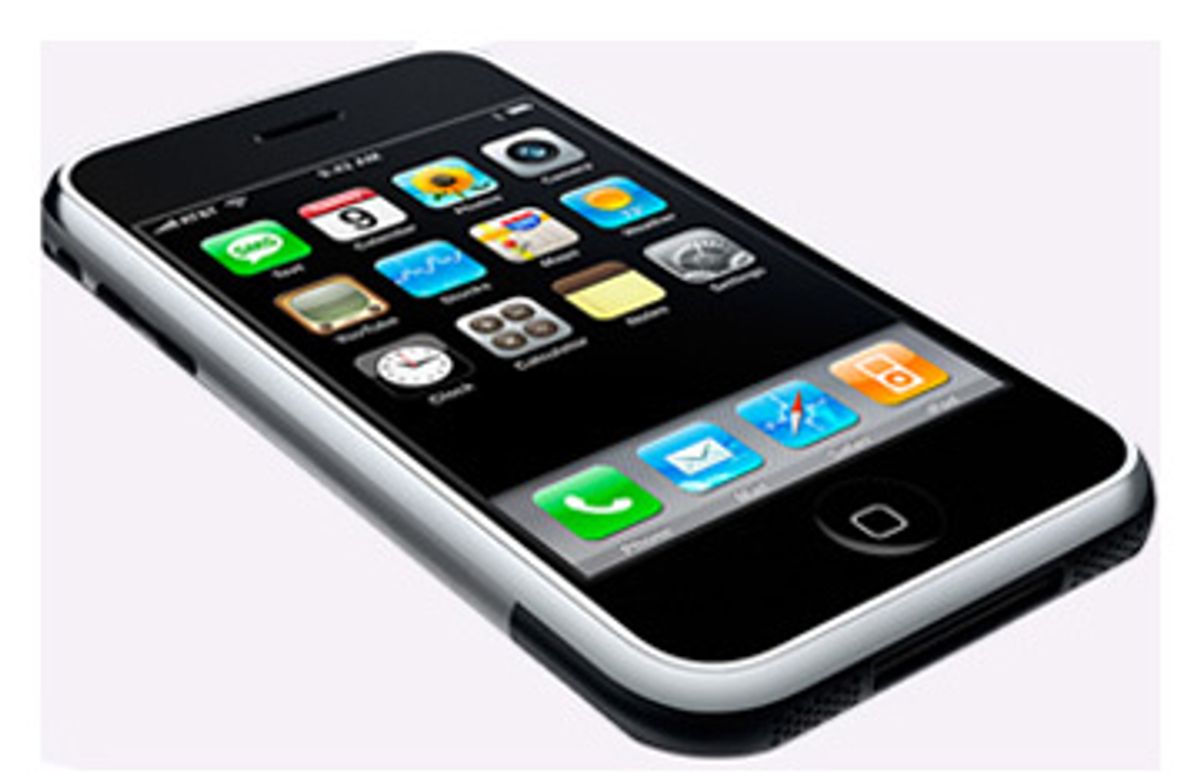 The iPhone -- Apple's first phone, which could either be its last phone, or the world's first truly great phone and the only phone you'll ever need -- comes out Friday. That's 170 days and about 8 hours since CEO Steve Jobs unveiled the device at the Macworld show in January. It's been a long wait. Jobs is fond of announcing new things when they're ready; he bounds onto the stage, surprises you with something he insists is truly new and delicious, puts on a flawless demonstration (during which he'll say "Boom!" a dozen or so times), and by the end you're ready to stop by the Apple Store to unload your cash.

The iPhone is different; Jobs is making us wait like never before. People who follow Apple have been anticipating the phone for years, and in the past six months, speculation about all it can do has consumed techies to the point that you fear for some people's sanity were the phone to disappoint. You know something's really big when it goes meta, and with the iPhone, now, we're in several layers deep -- journalists are writing not only about the iPhone, but also about how people can't stop talking about the iPhone, and about how the press can't stop writing about how people can't stop talking about the iPhone. The sane response -- and I don't blame you -- is to wish that people would just shut up already about the iPhone. The great gadget blog Engadget even put out temporary iPhone-free RSS feed to accommodate such phone-weary readers.

This article is about why you should care despite the hype. Let's call it an attempt -- one necessarily flawed, because the thing is not yet out -- at a sophisticated exegesis of a sociological phenomenon. I'll cover what's important about the iPhone as well as why the buzz about the iPhone makes sense -- why, that is, you should care about the phone even if you don't plan to buy one.

Let's do it Q&A style, starting at the basics:

What is an iPhone?

Jobs' standard line seems filched straight from a Ron Popeil demo. The iPhone, he says, is three amazing devices packed into one: it's a fantastic phone, it's the best iPod Apple has ever built, and it's a groundbreaking "Internet communicator" that makes the Web more portable than it's ever been before. (See Apple's 20-minute iPhone film.)

This last one is key. We all have phones and iPods, but the portable Internet is a fairy tale every tech company has been laboring to realize for a long while. So far, we've got nothing very great. The best portable Internet app is e-mail on a BlackBerry, and it feels stunted compared with what you get on a full machine.

Apple says the iPhone will give us the Internet on the go -- and because Apple has a vaunted history of making good on big claims about consumer technology, it's wise to take it seriously.

So that's why people are nuts about the iPhone -- because you can search Google on a bus?

Well, don't underestimate the importance of searching Google while you're riding a bus. The tech world is betting big on "the mobile Internet," which could prove to be a huge pastime and, thus, a huge business opportunity.

But that's only the brainy reason people like the iPhone. There's a more visceral appeal to the device, a sensation it triggers somewhere below the neckline, and to appreciate this effect I'll have to refer again to Ron Popeil. Malcolm Gladwell once pointed out that Popeil designed his mega-bestselling rotisserie cooker, the Rotisserie Showtime, with television in mind. The infomercial maven labored over the precise slant of the Showtime's glass casing in order to bathe the rotating chicken in light; he spent many hours tinkering with the speed of the rotisserie's motor, getting it so the meat cooked to a mouthwatering golden brown.

Gladwell writes that "Ron understood that the perfect brown is important for the same reason that the slanted glass door is important: because in every respect the design of the product must support the transparency and effectiveness of its performance during a demonstration -- the better it looks onstage, the easier it is for the pitchman to go into the turn and ask for the money."

You can say the same thing about Steve Jobs, who has been endeavoring all his life to create electronics that are transparent and visually stunning, things that part us from our money not for what they do -- or not mainly for what they do -- but for the surpassing style with which they do it. When he unveiled the Mac more than 20 years ago, Jobs rigged up the machine to play "Chariots of Fire" and to announce to a crowd of astonished fans, "Hello, I'm Macintosh." Why do you need your computer to tell you who it is? You don't. But the demo sure showed off the little guy well.

Aesthetics are the essence of iPhone's buzz. The phone is, like all other Apple products, beautiful -- palm-size, just a couple of buttons and an all-glass face that, if it works as it should, will respond to the slightest touch. Only folks who haven't seen its interface wonder what's so great about the iPhone. It's just amazing. A two-finger pinch zooms in -- boom! -- and a pull zooms out, a flick of a digit slides through a list of song names or contacts, and when you flip the iPhone on its side, its picture also adjusts to the new orientation. As it is for every celebrity, our love for the iPhone is mainly about its face. The big question is whether its charms go deeper.

Are you saying the iPhone may not work as well as Apple says it will?

The question is really unnecessary: When the iPhone goes on sale, the marketplace will decide, as the MBAs say, whether it's any good. We're already seeing the earliest assessments, and soon everyone will begin to weigh in. Newsweek's Steven Levy got to try one, and he likes it. So do the Wall Street Journal's Walt Mossberg, David Pogue of the New York Times, and USA Today's Edward C. Baig.

Yet the iPhone is so different from everything else on the market -- and so few of us have had any time with it -- it's really quite difficult to resist wondering if its function may not live up to its form. In particular, there's the keyboard. The iPhone's sleekness depends on few buttons. But will a screen-based keypad really work well in the real world? Can you dial on this thing when you drive, or type e-mails without much frustration? If you're on the fence about the phone, and if typing is important to you, it'd be wise to wait to try it out before you jump in.

There's also the problem of AT&T, the phone's exclusive cell provider. Will AT&T's network -- and the iPhone's support for only the slower EDGE rather than the faster 3G networking spec -- prove hardy enough to deliver a truly functional "mobile Internet"? These are questions for which we have no answers yet.

So is it possible the iPhone could flop?

Only a fool would predict doom for the iPhone. Apple aims to sell 10 million iPhones -- that is, it wants to capture less than 1 percent of the cellphone market -- in 2008. Nobody's betting it can't; it plans to ship 3 million units to stores this Friday, and it could sell out in a matter of days.

The more interesting question is, what would constitute a success for the iPhone -- what numbers would justify the hype? Apple controls more than two-thirds of the market for portable music players, but nobody believes the iPhone could capture such margins in the cell business, which is an order of magnitude bigger and far more varied than the market for iPods. More than 200 million cellphones are sold every year. If people just can't get enough of the iPhone, if it breaks past the 10 million mark and Apple starts releasing all kinds of phones -- cheap ones, small ones, colored ones -- as it did with the iPod, the thing could alter the cell industry as we know it.

What do you mean? How could the iPhone change the larger phone business?

Let me tell you a story. Last week I met with Jon von Tetzchner, the CEO of the Norwegian Web browser company Opera. Von Tetzchner was in San Francisco to promote the latest version of Opera Mini, a small program that people can download on their phones to speedily breeze through the Web. Surfing the Web on Opera Mini on an ordinary cellphone isn't as pretty as surfing the Web on the iPhone, but it's still quite useful. Through an ingenious server-caching system, the program shrinks down most Web sites so they come to your phone blazingly fast, and it allows you to scan and zoom in to Web sites in much the same way that you can on the iPhone.

Opera Mini will work on just about any phone on the market today -- except the iPhone. (That's the other problem with Apple's phone: It's locked down to other developers.) I asked von Tetzchner whether this worried him. In releasing a program for people to get the Web on their phones, wasn't he just going to get soaked by the upcoming iPhone tsunami?

But von Tetzchner sees the picture exactly differently. Let's say Apple sees crazy success, selling more iPhones than Steve Jobs ever dared dream -- 20 million, 30 million, even 50 million phones over the next couple of years. How will its competitors react to this assault? Obviously, they'll produce better phones. They'll design better hardware, they'll spend more on their user interfaces, and they'll turn to software companies -- companies like Opera -- for help in improving the Web on mobile phones.

And this gets to why you should care about the iPhone even if you aren't buying one. Today everyone uses a Mac. Even if you've got a Windows PC at your desk, you're really sitting down to a computer based on an idea first offered to the public by Steve Jobs in 1984. The mouse, the menus, the windows -- they were all on Mac first, and they spread to those of us who didn't buy directly into Jobs' regime only because Apple's competitors saw the Mac's features as vital to their own success. Go out to any consumer electronics store now and you'll see the same dynamic playing out for music devices: Everything on the market looks and feels like the iPod and offers much the same features.

It could happen for phones, too. You may not buy an Apple, but it's possible your next cellphone will claim to be a fantastic "Internet communicator" and will offer a great way to surf the Web. If that happens, thank Apple.

OK, you convinced me. The iPhone will be big. How do I get one?

You line up. The iPhone goes on sale on Friday at 6 p.m. at every Apple and AT&T store. You'll need to part with $499 for the phone, and at least $60 a month for a cell plan, and you've got to sign up for a two-year contract. Good luck.

Correction: I originally said the Mac was released more than 30 years ago in 1984; it's more than 20 years ago, naturally.