The reporter who has covered the last eight presidents speaks about problems with current journalism and the unprecedented secrecy of the Bush administration. 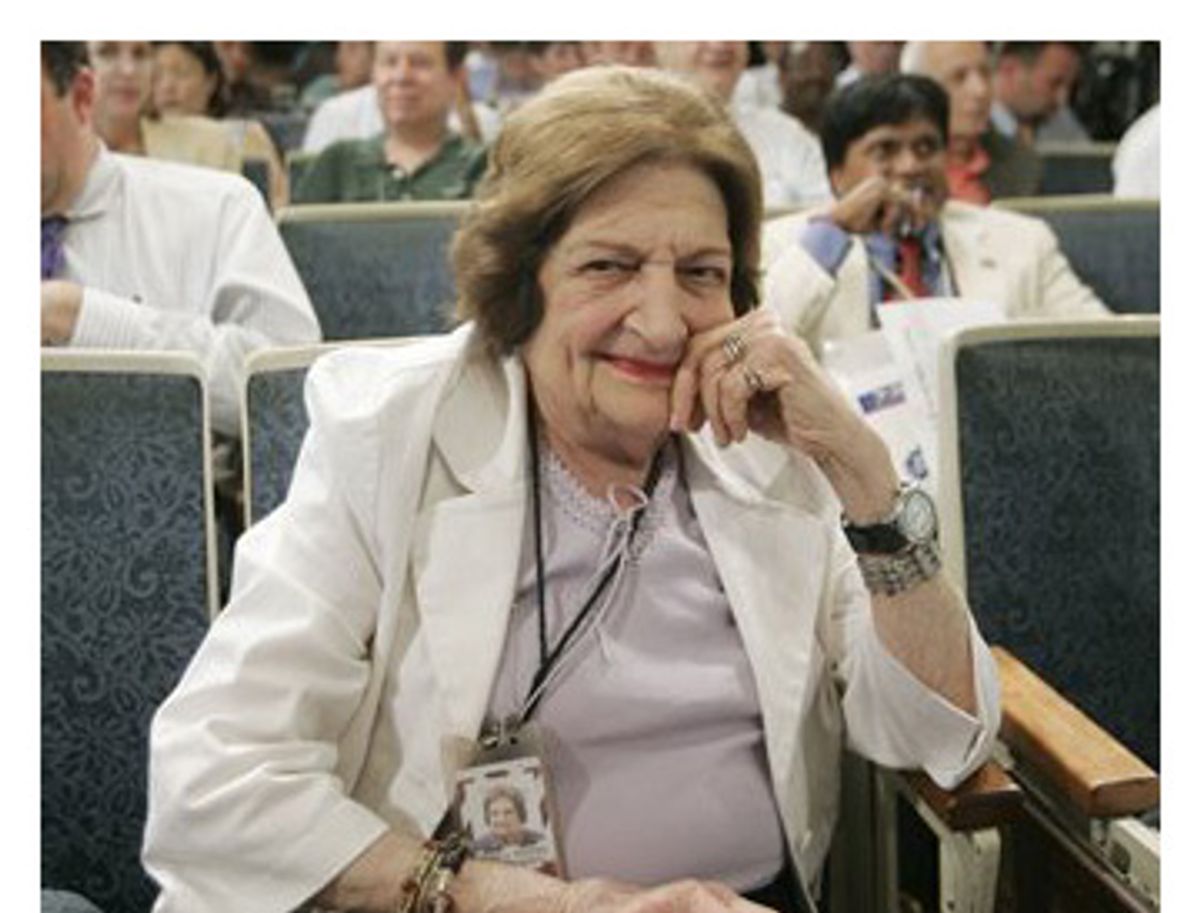 Last Thursday, I wrote about an acrimonious exchange at the White House press gaggle between Helen Thomas and Tony Snow regarding the number of Iraqis who have been killed during the war. Thomas relentlessly challenged the administration's tactic of labelling everyone killed in Iraq a "terrorist," and demanded to know how many Iraqi civilians had been killed during the four-year-and-counting war. Snow claimed he did not know the answer because the U.S does not "track" that information.

About that exchange, I wrote: "It is unnecessary to identify the reporter asking these questions because there is really only one White House correspondent who would." Several commenters suggested an interview with Thomas, and following up on those suggestions, I interviewed Thomas this morning regarding the state of modern journalism, the Bush administration and related issues.

Following is a verbatim transcript of that interview, edited solely for length:

GG: You have covered every President since John Kennedy. I wanted to ask if you could identify how the White House press corps has changed over time, if it has, and what differences are there in terms of how journalists cover presidents?

HT: Well, that's a big order. But I do think that in the good olden days, reporters were really straight reporters. I worked for a wire service, UPI, for 57 years, and I covered the White House for UPI from the 70s onto Bush, and then became a columnist. So I certainly know both sides.

I did think that tough questions were always very important. With Kennedy, we knew he enjoyed the banter with the press, and he had the first live televised news conferences. And it made a big difference in terms of really capturing the imagination of the public. It was the first time they really saw reporters in action, they saw a witty president that was able to dodge questions as deftly as anyone, and he had great eloquence. That was the first time the American people really became interested in presidential news conferences.

And then Johnson had a love-hate relationship with the press. He couldn't live without us, and yet at the same time, he thought we were hurting him every day. The words "credibility gap" were created in that era.

With Nixon, that is when news management and manipulation really began. Now, every president wants to put his best foot forward, and always be able to manage and manipulate news coverage.

All presidential candidates, especially, vow to run an open administration. But they step foot in the Oval Office and the Iron Curtain slams down. Suddenly, all information that I think belongs in the public domain becomes their private preserve.

The manipulation of the press has become greater and greater. This is the most secretive administration I have ever covered. And they're all secretive.

HT: Very much so. Reporters, after Watergate, realized that we had let so much go by us. They got much tougher when President Ford took over. It wasn't animosity. It was anger that we hadn't asked the right questions. And the press became tougher.

But they really went soft after 9/11. Reporters, I'm assuming, did not want to be called unpatriotic and un-American when we were in a national crisis.

And I don't think the corporate heads exactly wanted anyone to rock the boat at that time.

But I kept asking questions about the validity of going to war against a country that had done nothing to us.

GG: How have you been treated by your colleagues that cover the White House, in light of the approach you take as compared to the approach that they take?

But when he got to me, I said: "Mr. President, why don't you respect the wall between church and state?" And he said: "I do," and I said: "No, sir, you don't. Otherwise you would not establish, for the first time in history, a religious office in the White House." And he drew back, and I said: "you're secular." So we had this dialogue.

That afternoon, I got a call from Ari Fleisher, the White House Press Secretary, saying: "What's the idea of blindsiding the President"?

Well, after that, I did go to a couple news conferences, and I was called on, and I asked the President why he had seen Sharon, the Israeli Prime Minister, 9 times, but never would give any meeting with Arafat. My questions did not sit well. After that, I was never called on at a News Conference. I would show up but didn't like being a prop.

And then they put me in the back row, which didn't matter. What matters is the question. You get one chance at the barrel with the president. You should not let it slide. I mean, they are public servants, presidents are. We pay them. And they should be accountable.

[Other reporters] are nice to me, but I'm not trying to please my peers. I'm trying to get the information that the American people have to know, they have a right to know everything that affects their lives and that is done in their name.

GG: You mentioned the fear of being accused of being unpatriotic after 9/11 -- is that fear eroding now?

I think reporters definitely retreated and they let the country down. I wrote a book, called Watchdogs for Democracy? -- with a question mark -- because I was really upset, because I felt reporters should be asking important questions to save lives.

They began coming out of their shell with Katrina. They were basically unleashed then, were allowed to ask the questions to show the misery that was going on, and also to question the administration. Since then, they have become tougher. I do think that their corporate heads gave them the go-ahead during Katrina.

But we really let the people down. The fact that news agencies went along with the fact that they wouldn't show any photographs of coffins? The President attended no funerals and so forth.

And all of the whole business of casualties are not even mentioned for the Iraqis. I called the Pentagon -- used to call and say "how many Iraqis have been killed?" They'd say: "We don't track that. They don't count."

[Thomas added, in response to my mentioning the Washington Post series on conditions at Walter Reed, that she was not impressed with the Post's coverage: "Walter Reed, for God's sake, that's been there, the whole issue had been reported by others. Why did the Washington Post suddenly jump on it? Other reporters had done stories on it. Where was the Post, for God's sake? We're into the fifth year of this war."]

GG: There is a new global Pew poll that conducted a major survey of world opinion of 47 countries that was just released yesterday, and it shows that public opinion of the United States in virtually every country over the last 6 years has declined enormously. And there is a real confusion among Americans about why that is, and they have a hard time understanding why that is.

Have press failures in discussing what we are doing in the world played a role in that?

HT: I think the American people, like people all over the world, know that under international law, you only go to war if you're attacked or you have a treaty with another country to go to war if they're attacked.

An unprovoked war, based on every rationale that turns out to be untrue, certainly has caused our esteem in the world -- we are despised -- not because we gave them something and took it back. It's because we were on a pedestal. We had a halo. Everything we represented, people all over the world aspired to.

And what we did was absolutely betray those great values and principles. You do not attack a country that did nothing to you.

GG: One of the polls that was released 6 months after we invaded Iraq showed that 70% of Americans thought that Saddam Hussein was responsible for the 9/11 attacks. And a recent poll shows that 40% of Americans still believe that -- believe that Saddam Hussein had a role to play in planning the 9/11 attacks, which, of course, is a complete and utter myth.

How is such an obvious myth allowed to take hold among such a large percentage of the American populace? Is that a matter of great concern? Why do you think that happened?

Even Tony Blair said that in 45 minutes we could be obliterated by a missile launched by Iraq. I'm paraphrasing. Every talk show said that the smoking gun would be the mushroom cloud.

That's why it was so effective. There were no voices to counter it. Congress laid down on the job. I think we have to hang our heads in shame. The truth is always the first casualty of war, to coin a cliche.

GG: One of the concerns that many people have, in light of what the President and his followers are saying about Iran, is that it seems to be quite similar in terms of how the rhetoric is evolving when compared to what was done leading up to Iraq.

How serious of a possibility do you think it is that there will be some sort of military confrontation with Iran before the President leaves office?

HT: It's clearly a danger. The neocons definitely want it. Yet most of them are jumping ship now -- running to safe houses, like Georgetown University, John Hopkins University School of International Studies. They're fading into the woodwork, because they know things are on the skids.

Certainly Israel now considers Iran a big problem, a danger, as they did in terms of Iraq. But I think the Iranians are afraid now. We have two aircraft carriers pointing missiles, and submarines, in their backyard. They are getting softer. They invited the UN inspectors to come in. So diplomacy is working.

But the real question is -- will this President do anything rash, go even further? He doesn't even understand that diplomacy works. Nobody wants their country shot up, not even the worst dictators.

GG: I really appreciate your taking the time to do this interview. I hope you know that there are a lot of people who really admire what you do. I read the transcript of the White House press gaggle every day and it's always easy to know exactly which questions are yours because they're the ones that are probing and demand real answers.

HT: There are a lot of people who think I'm off the wall, but that's OK.

I always say to them -- who are you? We pay you. You are working for the American people. It doesn't mean we're antagonistic. It means we care about this country, and care about truth. And I honestly believe we will be better off when we face the reality of what we've done.