It is always valuable when the premises of the Authoritarian Mind are explicitly revealed.

On Tuesday, Tucker Carlson invited Jonah Goldberg onto his show so that they could both giddily share their deep personal affection for Dick Cheney while debating which of Cheney's strong and manly attributes are their favorite ones. In just two minutes of chatty, giggly Cheney worship, the following tough-guy cliches flew from their mouths:

* he's "a politician who doesn't look at the polls. . . another Harry Truman";

* "Have you ever seen Dick Cheney give a speech? I mean, the contempt for the audience is palpable" -- "I know, I -- see, I love that. He looks like he should be eating a sandwich while he's doing it, eating lunch over the sink . . I love that";

As always, the pulsating need among the strain of individual represented by Tucker Carlson and Johan Goldberg to search endlessly for strong, powerful, masculine figures so that they can feel those attributes and pose as one who exudes them (Jonah Goldberg: "love to have a beer with the guy") is its own stomach-turning though vitally important topic. The same is true of the fact that the movement of which they are a part virtually always venerates as Icons of Courageous Sandwich-Eating Masculinity precisely those figures who so transparently play-act at the role but whose lives never exhibit any such attributes in reality. That, too, is its own rich and abundant topic.

But I want to focus on one specific exchange between Tucker and Jonah as they explored the Greatness of Dick Cheney:


CARLSON: But I'm bothered by Cheney's -- but does -- Cheney's secrecy, his penchant for secrecy. I mean, this is a cliche, a stereotype, but it's rooted, apparently, in truth. The guy really is secretive to a degree we haven't seen in a while. That is -- I mean, we do have a right to know what our government is doing, don't we?

GOLDBERG: Yes, sure, although I think you would concede, even though you and I disagree about some foreign policy stuff, you and I would agree that there are some things that should be kept secret. We might disagree about what they are.

GOLDBERG: And you know, but I do think that what Cheney has learned after a lifetime in Washington as a power player, is that the person who holds the secrets has power. And he is using that for what I would say, or probably what he believes to be certainly good ends. A lot of people disagree on that, but he's trying to do best as he can and he sees holding onto power as a tool to do that.

That, of course, is the defining mentality of the Authoritarian Mind, captured in its purest essence by Jonah. Our Leaders are Good and want to protect us. Therefore, we must accept -- and even be grateful -- when they prevent us from knowing what they are doing. The less we know, the more powerful our Leaders are. And that is something we accept and celebrate, for our Leaders are Good and we trust that the more powerful they are, the better we all shall be.

No inferences or interpretations are required to describe Jonah's mentality this way. That is precisely -- expressly -- what he said. And though it is rarely expressed in such explicit form, this is the mindset which, more than anything else, has enabled the rampant lawbreaking and unprecedented secrecy of the last six years.

We do not need open government, do not need to know what our Leaders are doing, must not demand that they act only within the limits of law -- because we place our faith in them, trust in them as warriors for the Good who want only what is best for us. Transparency and oversight diminishes their power, makes them weaker. And we want them to be as powerful as possible. Or, as Jonah so succinctly put it: "the person who holds the secrets has power. And [Cheney] is using that for what I would say. . . to be certainly good ends."

There is only one other instance I can recall of the Authoritarian Mind so vividly revealed. Several months ago, the animated show, Family Guy, introduced a new character, Jillian, who was the new girlfriend of Brian, the family dog.

Jillian is unusually stupid, which was the source of most of the show's jokes. She said things like: "Oh my God, Brian, I was watching something on TV about this guy named Hitler . . . somebody should stop him" and "I know, the lemonade's good, right? I just wish they didn't have to kill so many lemons to make it."

In the episode where Jillian first appeared, Brian's family invited Jillian over for dinner for the specific purpose of asking her questions to elicit stupid answers that would entertain them. The following exchange ensued:


Stewie: So Jillian, what are your views regarding Homeland Security? Do you think that we should support what the President's is doing?

Jillian: Well -- I just think -- for starters -- that sometimes the Government has things they can't tell us, and truth-ish-ly, we should just accept that.

Coincidentally, several days after that episode was broadcast, right-wing blogs were excitedly discussing an argument that had taken place that day on the television program, The View, between Bush critic Rosie O'Donnell and Bush defender Elizabeth Hasselbeck, during which the following exchange occurred (at roughly 2:05 of the video):

O'Donnell: Would you say you trust the Bush administration as much as you did when he first took office?

Hasselbeck: You know what -- in a time of war -- I think you are in a position where you have to trust your government.

This is a photo of the scene where Jillian (seated at left) expressed her views about the need for us all to accept that it is best when the Government operates in secret: 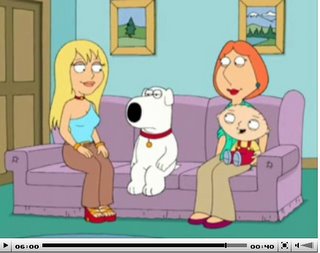 And this a photo of the scene where Hasselbeck (seated at right) expressed the same view: 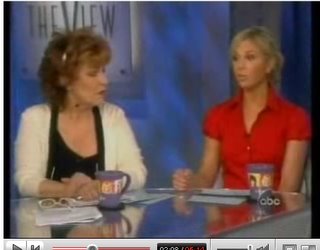 Our government leaders know that they can act in complete secrecy -- and can act illegally -- because such a sizable portion of our population, and our press corps, not only accepts, but eagerly desires, such behavior in our Leaders. The authoritarian mind, by its nature, craves powerful government officials, the more powerful the better, because -- as Jonah made clear -- they place blind faith in the Goodness of those Leaders and crave an all-powerful figure whom they can follow and who, in exchange, will protect them.

And anything which diminishes that power -- whether it be the limits of the law, checks from other branches or the media, or even the basic obligation to govern out in the open -- will be opposed by the authoritarian follower, for whom maximizing the strength and power of the Leader is always the overriding goal. Conversely, anything which limits the power of the Leader is to be opposed.

Anyone observing our political culture over the last six years -- from the blithe acceptance of rampant government secrecy to those defending the President's right to act without legal limits -- ought to be able to infer that these are the premises motivating the Bush movement and their media enablers.

But such inferences are not even required. These propositions ought to be beyond dispute due to those instances in which authoritarian followers like Jonah, Elizabeth and Jillian make as explicit as can be that they desperately want our Leaders to consolidate as much power as they can and have us know as little as possible. That is how our Leaders become more powerful, which is good, because our Leaders are Good. So much of the last six years is attributable to how pervasive this classic authoritarian mindset has become.