If the British people really do want less spin and more substance from their prime minister, then Gordon Brown could be the man to deliver it. 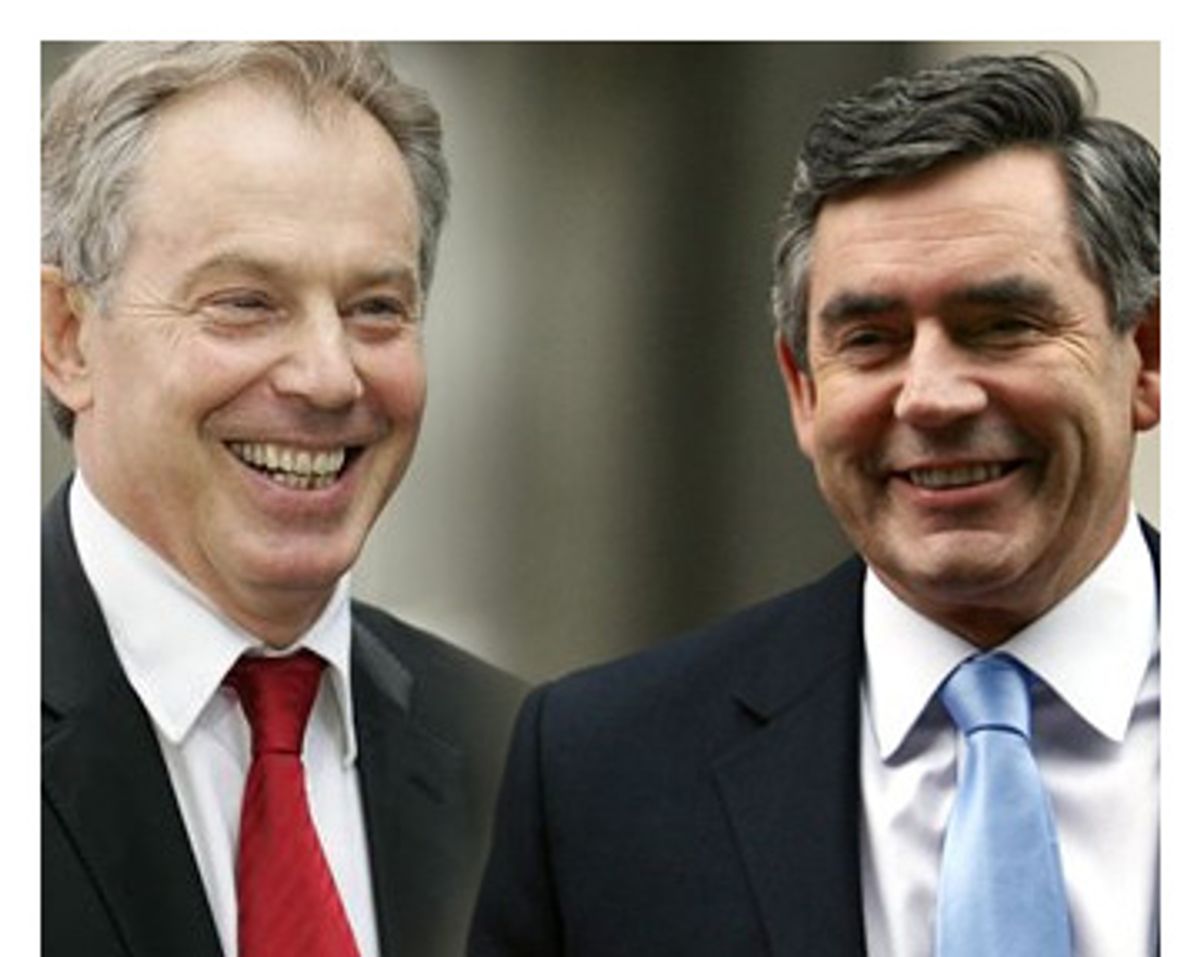 So, where's the pomp and circumstance? The British love their arcane national rituals, whether it's the changing of the guard at Buckingham Palace or the ornate, even ostentatious, display of finery at the state opening of Parliament. You can't open a new hospital, school or bus stop in this country without some member of the royal family turning up to unveil a plaque commemorating the occasion.

But the actual transfer of power from one prime minister to the next is a curiously undignified affair. The old premier is often still cramming personal effects into a van at the back of 10 Downing Street while the new one is posing for the cameras at the front. There are no parades or processions, no inaugural balls. The lack of ceremony says a lot about the British attitude toward politics: Government is a mundane, messy business; better just get on with it. And the contrast between Tony Blair's and Gordon Brown's entrances into Downing Street says a lot about what to expect from the Brown premiership.

When Blair swept into Downing Street in 1997, after trouncing a decrepit, demoralized Conservative Party, the streets were lined with cheering throngs. People shouted, screamed, whooped for joy. They even waved Union Jacks! You would have thought the Brits had just won the World Cup or a war or something. When Brown trundled in on Wednesday, however, the streets were pretty much bare. There were crowds and Union Jacks scattered here and there, but just as many people were yelling, "Good riddance, Blair!" and "Britain out of Iraq!" as were shouting a welcome to Gordon Brown.

Brown was not elected prime minister, of course, so there was none of 1997's post-victory buzz. Under the British system of government, when a prime minister steps down (or is ousted) between elections, the members of the ruling party -- not the people -- choose his or her successor. Brown is keenly aware that he lacks a popular mandate. He's also keenly aware that voters are almost as disgusted with his Labour Party as they were with the Conservatives 10 years before. He's waited a long time for the top job; he has no intention of becoming the British equivalent of a one-term wonder, a kind of Scottish Jimmy Carter.

Brown wants to win the next election, which he can call anytime over the next three years or so, in his own right. That's why his little speech outside 10 Downing St. was so humble, so earnest, so contrite -- so, well, un-Blair-like. And that's why he's likely to focus relentlessly on the domestic issues that matter most to British voters: the National Health Service (NHS), education, and housing.

A decade ago, Blair's political gifts -- his soaring rhetoric, his ability to project warmth and sincerity -- were crucial in making the Labour Party electable again. Since joining Bush in the Iraq war, though, these same qualities have been Labour's greatest liabilities. Blair came to be seen by many as smarmy and sanctimonious, stubbornly preaching to a choir that was singing a completely different tune. His sermons -- about the NHS, Africa, the war on terror -- began to grate as things went from bad to worse in Iraq.

In contrast, Brown -- the son of a Church of Scotland minister -- sounded as if he were dutifully reciting his catechism when he spoke for the first time as prime minister outside 10 Downing Street. His political agenda never strayed far from home, and his rhetoric barely got off the ground. "At all times I will be strong in purpose, steadfast in will, resolute in action in the service of what matters to the British people," he intoned. "I've heard the need for change. Change in our NHS, change in our schools, change with affordable housing, change to build trust in government, change to protect and extend the British way of life. And this need for change cannot be met by the old politics." He even quoted his old school motto -- "I will try my utmost" -- a phrase so appallingly saccharine that people would have retched all over their carpets if Blair had said it.

But Brown was utterly convincing, right down to the way he fumbled with the microphone before he spoke, because, despite more than a decade as Blair's most powerful ally and rival, he really is different. Brown is a man to whom smiling does not come naturally. When he suddenly remembers to smile -- as he did, quite awkwardly, outside No. 10 -- his face bursts into an unnatural glare, like a fluorescent light flicked on in a dark room, as opposed to the warm, glowing grin of Blair. Brown is also more of an old-fashioned public servant and less of a glad-hander than his predecessor. He signaled this difference, albeit symbolically, in his first act as prime minister, by revoking the Blair order allowing two special advisors (neither of whom is still in government) to issue instructions to the civil service. That was the clearest sign he could give that the days of the dreaded Blair spinmeisters were over. If the British people really do want change -- less spin, more substance; less saving-the-world, more saving-the-NHS -- then Brown could well be the man to deliver it.

That is not to say that Brown will ignore foreign affairs or Britain's "special relationship" with the United States. Brown is just as committed as Blair to Africa. He will robustly defend the free market against the efforts of other European leaders, like French President Nicolas Sarkozy, to constrain it. And he is unlikely to make any drastic course corrections in Iraq, given that Blair announced before he left office Britain's intention to start withdrawing troops.

But Brown will probably be more bulldog than lapdog when it comes to dealing with Washington. It's hard to imagine him comfortably donning a bomber jacket and exchanging backslaps with Bush at Camp David. Brown is just as avidly pro-American as Blair, but he is far more enamored of America's economic policy than its foreign policy. In any case, the first test of the special relationship under Brown is not likely to come from Iraq but from the U.S. Department of Justice's investigation of BAE Systems, a U.K.-based defense contractor accused of bribing Saudi officials. The company denies any wrongdoing. The Blair government recently quashed a similar investigation in Britain, further fueling the perception of sleaze at the top. Brown could score two quick victories -- establishing his squeaky-clean credentials at home and pleasing the United States -- by instructing British officials to cooperate fully with the Department of Justice.

As the Blair family piled into a car to leave Downing Street for the last time, a reporter called out (sarcastically, no doubt) to Cherie, the prime minister's wife: "We'll miss you!" Cherie smiled, waved and shot back: "I don't think we'll miss you!"

The feeling is mutual. Few people in Britain are sad to see Tony Blair go, despite his many accomplishments. He began the process of repairing and revitalizing the NHS; he brought devolved government to Northern Ireland; in places like Kosovo and Sierra Leone he showed what, before Iraq at least, a "moral" foreign policy might have looked like. He could have been the people's prime minister, but he went a war too far -- and paid the political price.

Even Blair himself seemed relieved to be going. During his final appearance at the prime minister's question time in the House of Commons, he replied to a query about Britain's relationship with the European Union by simply saying, "Au revoir, auf Wiedersehen, arrivederci." After tendering his resignation to the queen, Blair hopped an ordinary commuter train back to his constituency in northern England to quit as a member of Parliament, too. He seemed glad to be done with the bickering and the carping, ready to move on to less thankless tasks -- like sorting out that little spot of bother between the Israelis and the Palestinians.

Blair started his premiership with the highest of hopes and ended it on a disappointingly low note. Brown takes over with the British people expecting far less of him and of politics in general. But if he's not deflected from his domestic agenda by foreign crises, he might yet deliver what Blair could not.