This delicious tale of a rat who cooks is pure joy, a grand achievement -- one of the most beautiful animated pictures ever made. 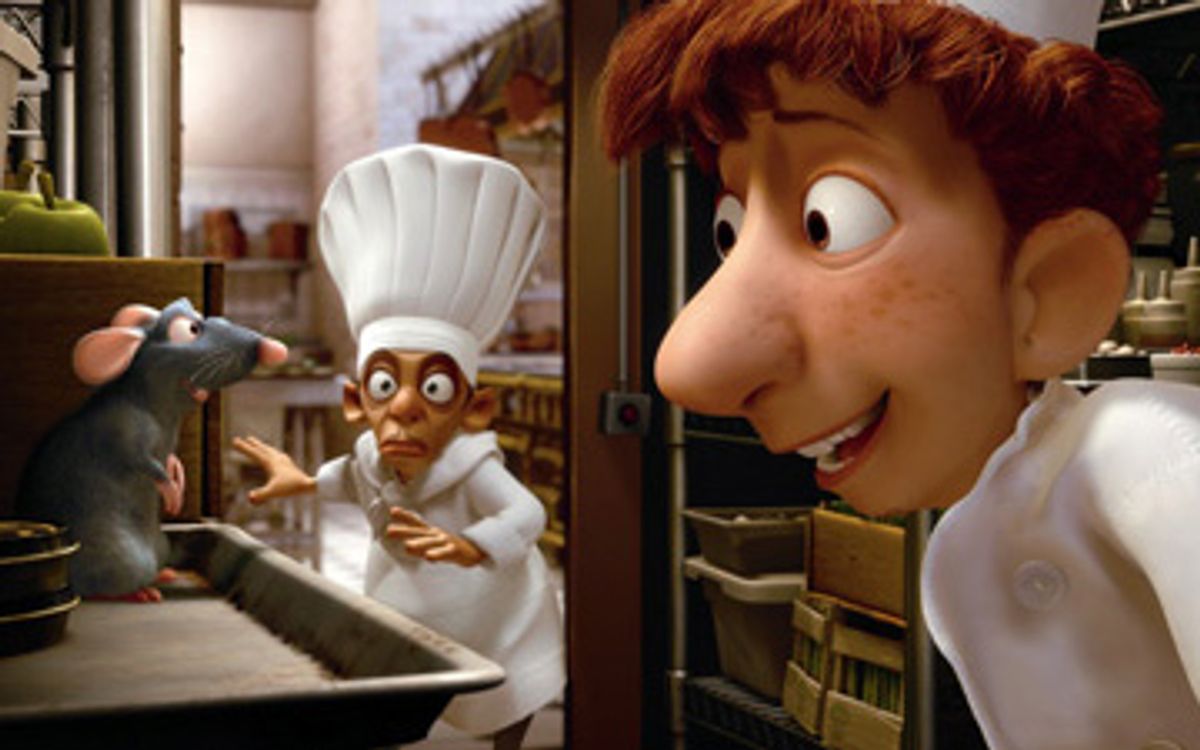 One of the great pleasures of Brad Bird's "Ratatouille" -- just one of many in a picture that is itself about the rewards and the frustrations of seeking pleasure -- is its inherent lightness, the way it seems wholly unaware that it's a grand achievement of animation, even though it is. Bird is one of the great modern animators -- as well as an astonishingly gifted filmmaker, period -- precisely because he doesn't set out to wow us. His colors are never garish; his characters are always written, fleshed out, not just storyboarded; and his ideas, while easy enough to grasp, stretch beyond the typical homilies of being true to oneself, or of asserting that everyone is special. In fact, Bird's pictures -- which include the gentle but assertive 1999 Cold War fable "The Iron Giant" and the 2004 superhero adventure "The Incredibles," a movie about families and the nature of democracy -- honor and celebrate individuality even as they recognize that the development of potential (and not just mindless praise of the raw, unshaped material in all of us) is what's important. Each of us has a specific set of gifts, but recognizing them isn't enough; it's what we do with them that counts.

And so with the Disney/Pixar "Ratatouille," Bird gives us the most distasteful setup imaginable -- rats! in the kitchen! not only touching the food, but preparing it -- and turns it around into something we couldn't have expected. Remy (his voice is that of comedian Patton Oswalt) is a French rat with a highly attuned sense of taste and smell, such that his father, Django (Brian Dennehy) and his large network of rat friends and family put him to work sniffing around for hidden rat poison. Remy knows that as a rat, it's his lot in life to scrounge and to steal. Still, he's a rat with a dream: He wants to become a chef, to be the creator of something, not merely a thief or hanger-on.

Remy's idol is a jolly, rotund celebrity chef named Gusteau (Brad Garrett), whose dictum is "Anyone can cook." At least that was his dictum: Gusteau, whose heart was broken over a bad review by spiteful food critic Anton Ego (a deliciously nasty Peter O'Toole), which resulted in the loss of one of his restaurant's stars, has passed on to that great kitchen in the sky. But he hasn't left this earth altogether. A cheerful, vaporous mentor rising from the pages of one of his own cookbooks, he appears to Remy to guide and inspire this sincere and intelligent little rat. Remy finds his way into the kitchen of the once-great chef's Paris restaurant -- which is now being run by a greedy, self-serving operator named Skinner (Ian Holm) -- and forges a tentative, tempestuous kinship with its skinny, lackadaisical garbage boy, Alfredo Linguini (Lou Romano), who will help him do the work of turning his dreams into reality.

"Ratatouille" is a practical-minded picture, a story that's less about dreams than it is about work. But it's also about the delight that work, done well, can bring. Bird captures the heady chaos of working in a kitchen, the edgy, adrenaline-fueled ballet in which a handful of players avoid one another, and help one another, as each keeps a hand in a dozen things at once. Bird shows us arms and legs dashing by in a blur, onions being chopped with surgeonly precision, the contents of frypans being tended as if they were great art instead of just dollops of eggs and cream. (Even if you've never worked in a restaurant yourself, you'll recognize the authenticity of the setting if you've read Anthony Bourdain's "Kitchen Confidential"; Bourdain gets a thank-you credit on the film.) The kitchen of "Ratatouille" is also, incidentally, a racially diverse one: This may be a cartoon Paris, but it doesn't exist completely in a cartoon world.

In an early scene, the ghost of Gusteau takes Remy on a tour of the restaurant kitchen, asking him to name all the players and their functions. When Gusteau gets to the lowly, gangly helper Alfredo, Remy says, "Oh, that's nobody." Gusteau quickly corrects him -- "He is not nobody. He is a part of the kitchen" -- and from that simple statement, the ultimate meaning of "Ratatouille" begins to unfold. In Brad Bird's world, everyone has a role to play. As one character will intimate later, not everyone can be a great artist. But great art can come from anyone, or from anywhere.

But it may be doing "Ratatouille" a disservice to talk about its intentions and meanings before stating, outright, that the picture is pure joy. I admit that I generally prefer short-form animation -- the perfect miniatures of Chuck Jones, Max Fleischer and Walt Disney -- to full-length features. I also prefer traditional 2-D animation to the computer-generated kind. But CG or not, "Ratatouille" is one of the most beautiful animated pictures I've ever seen: I'll even put it up against what is, for me, the gold standard, Walt Disney's luminous 1937 "Snow White and the Seven Dwarves."

Bird's palette is soft but vibrant, and he favors rounded, gently shadowed shapes. In stark contrast to the aggressive hyperrealism of so much computer animation, his figures seem to breathe, and even when the action is lively, it's never manic. His character design itself is a form of stealth: If you don't much care for rats -- and face it, how many of us do? -- you may feel a twinge of repulsion when you first see Remy's translucent pink bulb of a nose, his little pink hands peeking out from sleeves of gray fur. But he's so expressive, so matter-of-fact about his inescapable ratness, that it's easy to fall for him. The shambling, sleepy-eyed red-headed Alfredo, with his giant schnozz and mile-long legs, resembles a young Pete Townshend. Bird also gives us a sharp-edged and very French female character in Colette (Janeane Garofalo), an ambitious but experienced kitchen hand who eventually softens toward the inept Alfredo. With her almond eyes and businesslike bob, she's like a sexually alluring, but no less confident, version of Edna E. Mode.

Remy is alternately impatient with and tolerant of Alfredo's slacker-kid helplessness, and their friendship -- which blossoms around the art of cooking -- feels all the more genuine because it doesn't immediately ignite. But even though the story trots along at a healthy clip -- despite its 110-minute length, "Ratatouille" is never dull -- what's most wonderful about it is the way Bird layers so many lovely details. Remy doesn't just pop grapes into his mouth; he drains each one until it's the shape of a tiny wineglass, savoring every drop. When Remy first spends the night in Alfredo's Paris apartment -- it's a small but cozy garret overlooking the Eiffel Tower, a resplendent contrast of physical poverty and visual, egalitarian richness -- he sleeps in an oven mitt that's been set on the windowsill. The lair of the nasty critic Ego is a comic-nightmare vision straight out of Charles Addams, a coffin-shaped study that suggests nothing so much as a man shut off from the world.

Near the end of the picture, Ego has a speech that begins with a statement about the uselessness of critics, about the way they live for the experience of slapping things down instead of creating anything worthwhile themselves. The speech winds its way around to a more complicated revelation, about the importance of finding beauty and wonder in unexpected corners of our world. Still, I suspect many professional critics will take Ego's speech as a slap on the wrist, and people who hate critics -- you know who you are -- will feel they've received some juicy vindication.

But for me -- a person who writes about movies but doesn't make them -- Ego's speech rings completely true, and I can't read it as Bird's way of cutting down critics, of painting them as evil creatures who must be reformed. If anything, I wonder if he doesn't feel a kinship with them. Criticism, done right, isn't about destruction; it's about the pursuit of pleasure and delight and surprise, the seeking of both sensation and meaning, and sharing it with as many people as you can. At the end of "Ratatouille," I felt nothing but gratitude for the joy that Bird and his very large team -- doing work that I know is painstaking, time-consuming and extremely difficult -- were able to give me. Sitting down at the keyboard later, to work out the meaning of that pleasure, is my job. But the deep happiness I got from the movie itself is still my truest reward. I'd gotten the last bit of juice from every grape, and I couldn't ask for more.