How the home of hanging chads, Katherine Harris and butterfly ballots is shaking up the Democratic primary. 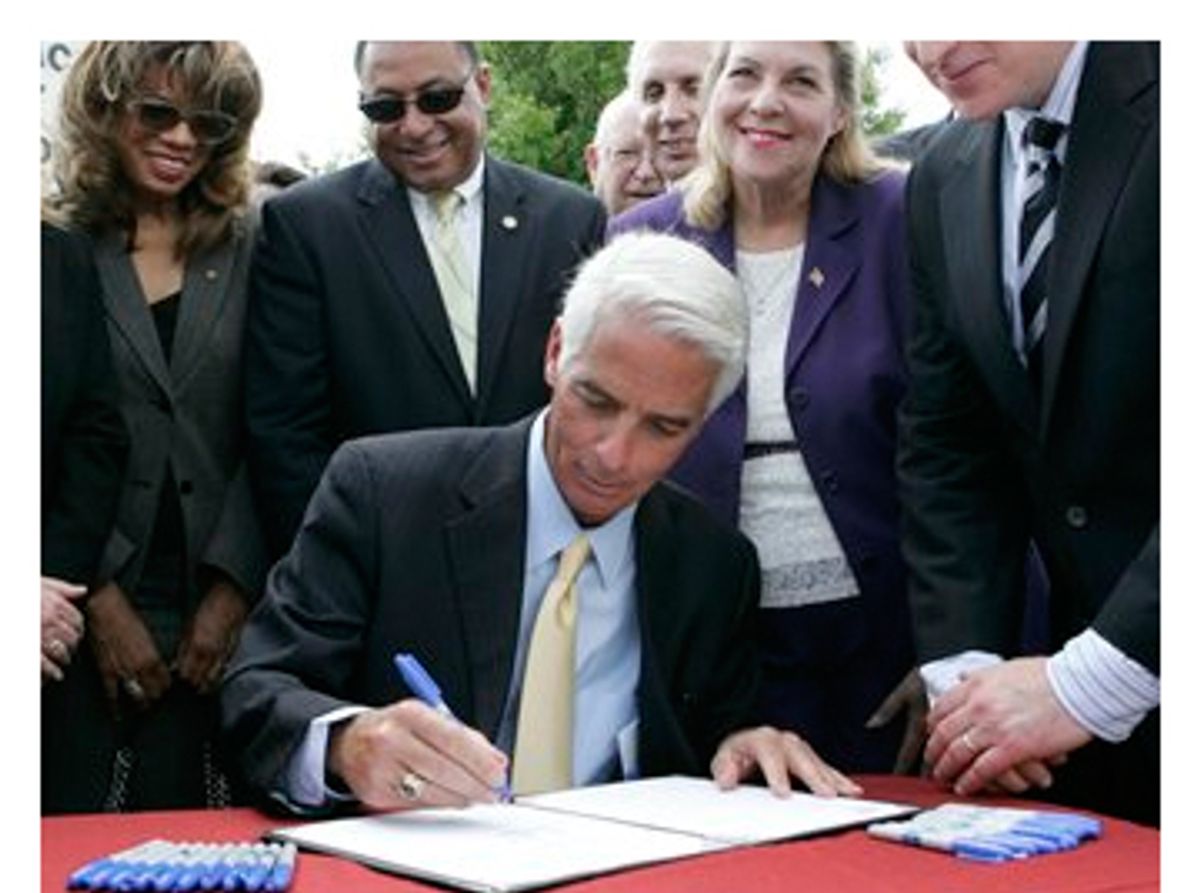 The biggest political event over the past three months in the Democratic presidential race had nothing to do with the candidates, their fundraising prowess, their debates or their TV spots. In fact, it originated with the Republicans, though it had no direct connection to the Bush White House.

After that dramatic drum-roll buildup, this one-state shift in the primary calendar may seem comically anticlimactic, especially since the move got little attention outside of Florida. But six weeks later, it is slowly becoming apparent that Florida destroyed the last vestiges of sanity in the 2008 presidential calendar by moving its primary. And for the Democrats, Florida potentially becomes Hillary Clinton's firewall state -- the primary in which she could launch a comeback even if she endures a string of early defeats. (A Jan. 29 Florida primary may also end up shaping the Republican race, but its implications are harder to decipher. Also, the Republican National Committee takes a more laissez-faire approach to the primary calendar, while the Democrats are constantly tinkering with their rules.)

The reason why the order of the caucuses and primaries is so important is that, historically, momentum (what an underdog Republican named George Bush called the "Big Mo" back in 1980) matters in choosing a nominee. In 2004, John Kerry romped to the Democratic convention largely because he won the Iowa caucuses and the New Hampshire primary. Similar back-to-back victories by Al Gore in 2000 left Bill Bradley on the canvas.

Last summer, the Democratic National Committee, in the name of regional, racial and ethnic diversity, anointed four small states for special treatment in picking a nominee by barring all other states from holding caucuses or primaries in January 2008. According to the DNC calendar, the presidential race would begin with the Iowa caucuses as it has for three decades (Jan. 14), continue with the newly upgraded Nevada caucuses (Jan. 19), the traditional New Hampshire primary (Jan. 22), and then go to the South Carolina primary (Jan. 29), which had been moved up in 2004 to add a state with a heavy African-American vote to the mix.

The new schedule had major flaws --- an earlier than ever starting date and the unnecessary insertion of Nevada (Senate Majority Leader Harry Reid's home state) ahead of New Hampshire, a state that zealously guards its first-in-the-nation primary. But it did give the presidential candidates a chance to prove their mettle in four diverse and affordable states before being confronted with Super Dooper Party Pooper Tuesday on Feb. 5, when nearly half the voters in the nation (including those in California, New York and Illinois) are slated to cast primary ballots.

John Edwards, in particular, seemed to benefit from this initial setup, since the first phase of the race would begin in his strongest state (Iowa) and end in the state of his birth (South Carolina), whose primary he won in 2004.

But everything changed when Florida moved its primary as part of an overall electoral reform bill, which won unanimous Democratic support in the legislature because it also eliminated touch-screen voting. A binding Jan. 29 Florida primary is an explicit violation of DNC rules and should automatically trigger sanctions that would take away half the state's convention delegates and penalize candidates for campaigning there. That is the theory anyway -- and the DNC, from chairman Howard Dean on down, will continue to publicly cling to this position until the party's Rules Committee takes up the Florida mess at its late August meeting.

The practical problem is that no political party in its right mind wants to penalize Florida, one of the must-win states for both parties in the 2008 election. Imagine TV cameras at a Democratic Convention panning the empty seats in the Florida delegation. If a Republican-dominated state like Utah or even Texas violated the DNC rules, it is a safe bet that they would be enforced to the hilt. But Florida is different, and it is the state that proves that, as a Democratic Party insider put it, "the emperor has no clothes."

Any possibility of the DNC brokering a fig-leaf compromise with Florida -- such as a non-binding "beauty contest" primary -- ended when Crist also scheduled a statewide vote on a property-tax limitation for Jan. 29. With state employee unions militantly opposed to this referendum, Florida Democrats will not agree to anything that would limit turnout on Jan. 29.

So it is hard to imagine how the DNC will prevail in enforcing its rules, which, incidentally, Florida originally supported. Asked in an interview for a scenario under which Florida would relent, Jim Roosevelt, the co-chairman of the DNC's Rules Committee, said bravely, "Maybe I'm an inveterate optimist, but I don't give up hope on that. Especially since the Democrats in Florida have played by the rules and the Republicans in Florida have put them in a difficult spot."

Florida has put virtually all Democrats not named Hillary in a difficult spot. Because the Democratic vote in Florida is concentrated in just four major media markets (Miami-Ft. Lauderdale, West Palm Beach, Orlando and Tampa-St. Petersburg), a full-scale primary campaign in the state can be waged for as little as $7 million, which is less than Howard Dean spent on the 2004 Iowa caucuses. But it will be difficult for any Democrat to compete with Clinton in Florida -- even Barack Obama, who may be able to outspend her -- because of her strengths among older and Jewish voters, two demographic groups that tend to vote heavily in Florida primaries.

The biggest potential loser in all this (other than John Edwards, who may quickly learn that Florida is not really a Southern state) is South Carolina and its primary. Instead of having the week after the New Hampshire primary to itself, South Carolina will now have to share the limelight with Florida, a state four times its size. For the moment, South Carolina Democrats are looking on the bright side of life. As former Democratic state chairman Joe Erwin, who played a major role in getting early status for the state on the political calendar, put it, "We've got all the presidential candidates invested in the South Carolina primary. The candidates are still coming here on a regular basis. This state is Iowa and New Hampshire with one thing added -- diversity."

Many of the problems caused by the jumping-bean Jan. 29 Florida primary could, in theory, be solved if all the other early states moved a week earlier in the calendar. But such a move to maintain a hint of rationality in the selection of a presidential nominee would run right up against the egos of Michigan Democrats. Michigan Democratic chairman Mark Brewer -- picking up a theme long advanced by Sen. Carl Levin -- has threatened to move his state's caucuses (now slated for Feb. 9) to the front of the line if Iowa, Nevada, New Hampshire and South Carolina do not abide by the party's calendar. Like Florida, Michigan is enough of a swing state in the 2008 presidential race to probably successfully call Howard Dean's and the DNC's bluff.

This bring us to perhaps the most powerful person in presidential politics who is invisible to the public outside his home state -- Bill Gardner, the secretary of state of New Hampshire since 1976. Originally a Democrat, but now about as nonpartisan a figure as can be imagined in 21st century politics, Gardner has the sole power to set the date of the primary, so that it maintains its first-in-the-nation status. When Gardner moved the 2000 primary to a date earlier than the one selected by the DNC, not even the state's Democratic governor knew in advance. As Fergus Cullen, the New Hampshire GOP chairman, says admiringly, "Billy Gardner sets the date, and he doesn't have to follow the rules of either party."

During a lengthy phone interview, Gardner gave few hints about the date for the 2008 primary. In fact, he would not even flatly guarantee that it would be next year. "I would like very much that, at least, this state does not have a [primary] this year. But" -- and here Gardner gave an audible sigh -- "it's not beyond the realm of possibility." Gardner also radiated a degree of fatalism about Michigan's intention to challenge New Hampshire for primary primacy. "Michigan's just going to do what they can and there may not be much for us to do about it," he said. "They're determined to wait us out and have an event. It might be Internet voting. But they're going to do it."

Small wonder that David Yepsen, the most influential political journalist in the first caucus state, wrote in the Des Moines Register last week that both Iowa political parties should be prepared, if necessary, to move the caucuses from their planned Jan. 14 date. Since moving two or three weeks earlier -- to adjust to Gardner's eventual decision in New Hampshire -- could create the ludicrous notion of Iowa voting on New Year's Eve or Christmas Eve, Yepsen suggested Dec. 17, Jan. 2 and Jan. 7 as alternate dates.

In truth, New Year's Eve for the Iowa caucuses makes about as much sense as anything else in this crazed system for selecting our presidential nominees. It would be comic, if the job at stake were not the presidency. And it is somehow fitting in a macabre way that the state that has brought everything to the brink of chaos is Florida -- the home of hanging chads, Katherine Harris and butterfly ballots.