Some Dems celebrate a new Senate bill to boost gas mileage. But it's premature to toast the end of our high-octane bender. 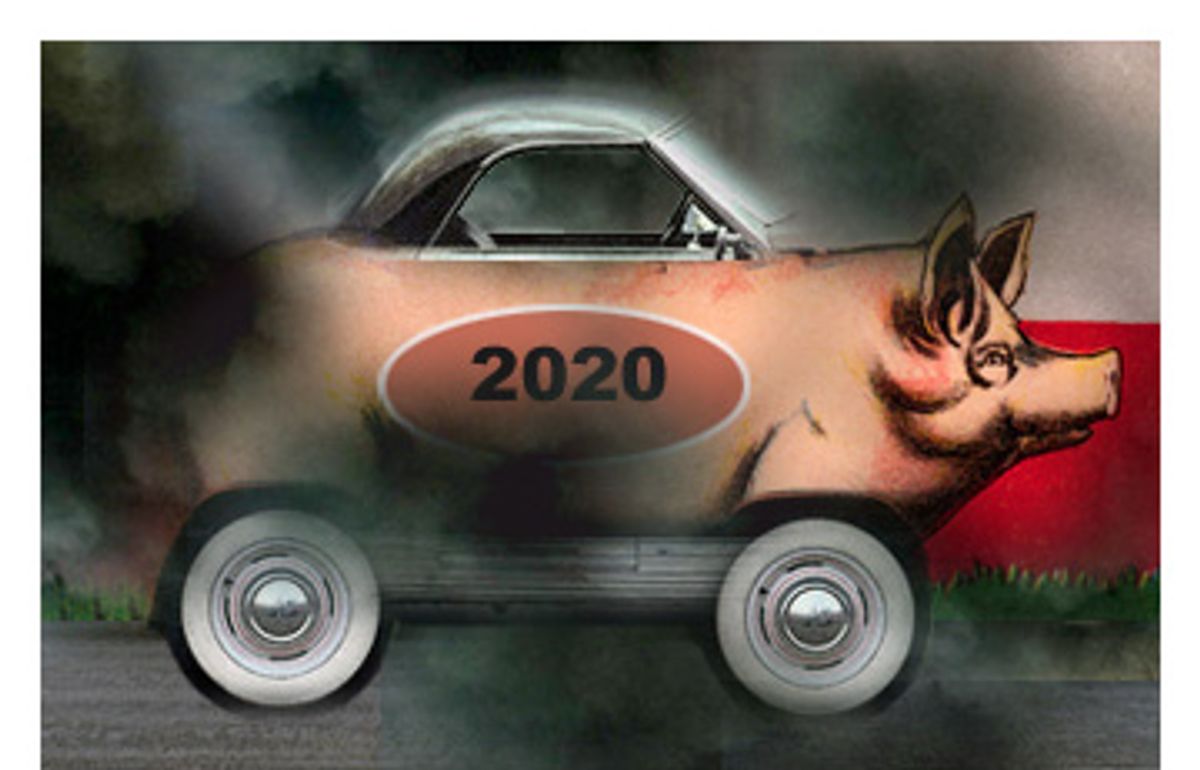 After years of stalling, the Senate on June 21 passed legislation that would significantly boost the fuel economy of cars, trucks, SUVs and minivans sold in the United States.

The energy bill requires that by 2020, the average new vehicle sold will get 35 miles per gallon, an increase of 40 percent over the current corporate average fuel economy (CAFE) standard. Achieving the new goal would cut America's dependence on oil by 1.2 million barrels per day, according to the Union of Concerned Scientists, almost as much as the U.S. imports from Saudi Arabia.

"This is a victory for the American public," declared a triumphant Sen. Dianne Feinstein. Democratic senators weren't the only ones crowing. "This vote represented the first time in 30 years that the Senate said to the auto industry, 'Enough of your lies, your pollution, your gas guzzling, your failure, we've got to make some progress,'" says Dan Becker, director of the Sierra Club's global warming program. Even the New York Times editorialized that the fuel economy move was a "hugely important breakthrough."

A close look at the bill, though, suggests it may be premature to break out the apple juice and toast the end of the U.S.' gas-guzzling bender. The bill is loaded with compromises, and it hasn't made it to the House yet. If it does become law, it will improve the nation's fuel economy by 10 miles per gallon by 2020. And because the law only applies to new vehicles, any drop in greenhouse gas emissions would not be fully realized until a decade after that.

"The CAFE increase proposal is not appropriate to the scale of the problem," says Kassie Siegel, climate program director at the Center for Biological Diversity. "Scientists are telling us that just 10 more years of business-as-usual emissions will make it difficult to avoid climate disaster." Becker understands the problem. But when it comes to existing U.S. laws, he says, the CAFE standard is still the best way to cut auto emissions, second only to power plants as a source of greenhouse gases. "The single biggest step we can take to curb global warming is to make cars, SUVs and trucks go further on a gallon of gas," he says.

For years, trying to raise the standard has meant an endless slog through the halls of Congress for incremental change. And that's the best-case scenario. At times in the past decade, despite a gradual increase in fuel mileage for all cars, drivers' love affair with SUVs caused total gas consumption to rise. This year the Sisyphean battle has been no different.

In the spring, a tougher energy bill received serious consideration in the Senate. It would have required that CAFE standards continue to rise 4 percent a year after 2020. But the dickering among senators edited that requirement out. The watered-down bill doesn't even meet the goal for fuel economy that President Bush, hardly an avowed conservationist, set in his State of the Union address. Worse yet, the way the Senate bill is written, there's no guarantee that the U.S. will actually make it to 35 miles per gallon by 2020. A loophole could make the actual increase much lower.

It takes about a decade for the nation's vehicle fleet to turn over -- for new cars to replace old ones -- so any change to CAFE takes years to have a real impact on the average fuel economy of vehicles on the road. Detroit fought the Senate bill, arguing -- as usual -- that it would be too expensive to comply with. That's not credible, considering that if you averaged the mileage of the most fuel-efficient cars, trucks, SUVs and minivans sold in the U.S. today, you'd already get a combined mileage of 31 miles per gallon. "We could already be at 31 miles per gallon, so going up to 35 in 13 years is just not enough," says Robert Shull, deputy director of auto safety and regulatory policy for Public Citizen.

In fact, cars that Toyota sells in the United States almost meet the 2013 standard already, getting just shy of 35 miles per gallon. (Automakers' CAFE ratings are found here.) Meanwhile, in Japan and Europe, cars and trucks on the road today already handily meet the United States' big goal for 13 years from now. In Japan, the current average is 45 miles per gallon, according to the Pew Center on Global Climate Change. Both the European Union and Japan have ambitious plans to toughen their standards.

The most worrisome aspect of the bill is that it won't force automakers to meet its relatively modest goals. If the National Highway and Traffic Safety Administration can show that it's not "cost effective" for automakers to meet the 35 mpg goal, then it won't have to require them to do so. "It's a big loophole," says Shull of Public Citizen. "Industry has perfected how to push through that loophole. It's going to be very easy for them to do much, much less than what the Senate thinks it has demanded. It's not a mandatory increase to 35 miles per gallon."

If there's a loophole that favors the automakers, you can expect the NHTSA, which is in charge of administrating CAFE, to find it. "They are a wholly owned and operated subsidiary of the Detroit automakers," says Becker. "Since 1989, they have sat on their tailpipes and done virtually nothing to improve fuel economy standards. Their approach to regulating the industry is to ask the industry what they want, and then do it."

There's also no guarantee the CAFE standard forces automakers to improve the gas mileage of their fleets. Some manufacturers regularly pay hefty fines for crossing over the CAFE border. For years, luxury automakers, such as BMW and Porsche, have simply eaten the fee as the cost of doing business in the U.S.

While the CAFE debate moves to the House, probably this fall, another approach has surfaced to get drivers to choose cleaner cars, trucks, SUVs and minivans. Still want to buy a gas guzzler? Fine, go ahead, but you'll have to pay a surcharge. The state would then use that money to fund rebates on more fuel-efficient cars.

In June, the California state Assembly voted down such an ambitious "feebate" bill, called the Clean Car Discount Act.b

With 1.8 million new passenger cars and trucks rolling out onto California's roads every year, Luskin's bill is part of the state's effort to reduce greenhouse gases at the tailpipe to comply with California's ambitious plan to curb global warming pollution. In the state, transportation accounts for 40 percent of all greenhouse gas emissions.

"People who are buying Hummers and muscle cars don't care about the environment," says Rosemary Shahan, president of Consumers for Auto Reliability and Safety, who supports the legislation. "They can still do that, but somebody else would be buying a much more fuel-efficient minivan thanks to them. Suddenly, lower and more moderate-income drivers would have access to that technology."

Theoretically, the program would create an incentive to automakers to produce more of the cleaner models. California, with some 20 million cars on the road, is their biggest U.S. market. Yet, unsurprisingly, the Alliance of Automobile Manufacturers vigorously opposed the legislation, taking out a full-page ad in the Sacramento Bee, denouncing it as a punitive car tax.

In the past, feebates have been proposed in Maryland, Connecticut and California. But they haven't yet been enacted anywhere except Washington, D.C., in the modest form of a somewhat higher registration fee for gas guzzlers and a somewhat lower one for hybrids. A big barrier: The federal government sees feebate programs as the states' interfering with CAFE, which has landed California in litigation in the past.

Siegel of the Center for Biological Diversity agrees. "We need a better response than we'll make the average SUV get 35 miles a gallon by 2020," she says. "We have to do way better than that, and we can." She suggests raising gas taxes to account for carbon emissions, or putting a cap on carbon emissions of the whole fleet of new vehicles, instead of just regulating their miles per gallon. But for the moment, CAFE is the best existing instrument for change -- however puttering it may be.