The Hillary and Bill show 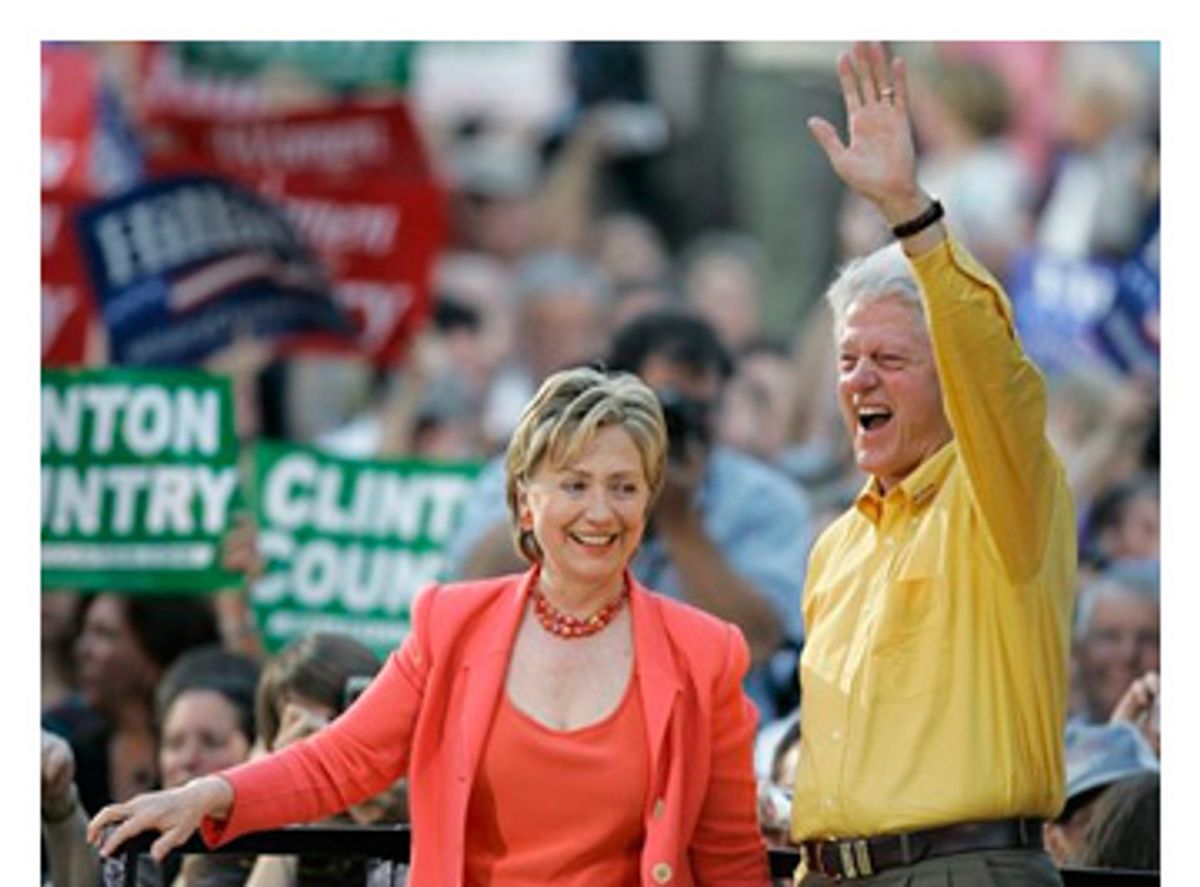 Splendid with feeling, Bubba is back.

"I'm a little rusty so you will have to forgive me," said Bill Clinton, the former president and first gentleman-in-training, as he took the stage Tuesday amid roughly 1,000 sun-blanched supporters of his wife, the presidential candidate Hillary Clinton.

The crowd laughed, because everybody knew his modesty was false. On a bad day, Bill is still better on the stump than any candidate now running for president. His pregnant pauses are perfectly timed, his intonations exacting and his Southern twang still hits all the down-home notes. America knows all too well his way of squinting for emphasis and rolling his lip against his teeth between sentences. They are trademarked blasts from the nation's more peaceful and satisfied past.

They are also the reason Bill traveled to Iowa this week for six events over three days, marking his first time on the trail with his wife in the only early voting state, where she trails slightly in the Democratic polls. He is making his debut as a surrogate and helpmate, despite the fact that it has been decades since he entered a room or addressed a crowd that he did not command. "This is the kickoff," said Mandy Grunwald, a senior advisor to the Clinton campaign on Monday night in Des Moines.

But the kick must be precise, since the campaign of Sen. Hillary Rodham Clinton straddles a contradiction. On the one hand, she is determined to present herself as her own woman, a Midwesterner "raised in a middle-class family," who worked her way through college and developed her own career as a public servant, legal advocate and New York senator. She speaks on the stump about her mother, who was born in the 1920s to teenage parents, and about her father, who made her work through college to earn money for books. "Ready to Lead! Ready to Change!" read the banners that greeted the Clintons at each of their stops on the swing through Iowa. "Women for Hillary" read the signs handed out to voters.

On the other hand, Hillary is selling herself as the candidate to continue her husband's dynasty. Her stump speech is riddled with references to the past, when she toiled in the White House shadows while he ran the country and much of the world. "It really does break your heart," she said in Des Moines, after being introduced by Bill on Monday night. "Six and a half years ago we had a balanced budget and a surplus. Six and a half years ago we'd seen the creation of 22 million new jobs in America. And more people lived without poverty than at any time in our history. We had a feeling that we were prepared for our future." Bring back the Bill Clinton White House, she was telling the crowd, only this time with me in the lead.

To minimize the confusion, the former president kept himself on a tight leash, limiting his introductions to about 10 minutes and focusing his talk on the biography of his wife. "Here's what I want to say to you: I'd be here tonight, if she asked me, if we weren't married," Bill said in Des Moines, negotiating the dangerous waters of their once-rocky marriage. "She is by a long stretch the best qualified non-incumbent I have ever had the benefit of voting for in my entire life." He did not mention that Hillary Clinton has only held elected office since 2000, less time than even Barack Obama, who is often criticized for being too green. But then Bill was crediting his wife with his own time in office, first as governor then as president. "You want someone to be president who knows what it is like for real people," Bill said, lowering and slowing his voice to emphasize the words "real people."

To clarify Bill's subordinate role, the campaign planted a hand-painted sign in the crowd to provide the former president with an opening punch line. "There is a guy out there with a sign from a group I belong to. It says 'Fathers for Hillary,'" he said on Tuesday. On Monday night, the sign said, "Husbands for Hillary." The audience laughed and cheered both times.

By most estimates the Iowa caucuses will be won or lost with only about 50,000 votes going to the winning Democratic candidate, which ups the value of any draw Bill Clinton can provide. The electronic billboard at the Iowa fairgrounds in Des Moines broadcast, "Iowa Welcomes Hillary and Bill Clinton," and the tickets in Iowa City boasted of an appearance by the couple, not just the candidate.

"I love to see Bill," said Tom Carsner of Iowa City, who pointed out that he's a supporter of John Edwards but came down by the banks of the Iowa River to watch the couple speak. He said he was still bothered by Bill Clinton's personal indiscretions while in office. "Monday, Wednesday and Friday, I want to kick him in the ass and throw him in the river," Carsner said of the former president. "Tuesday, Thursday and Saturday, I am happy that he was there to stop Newt" Gingrich, the former Republican speaker of the House who battled with the Clinton White House in the 1990s.

Though it was impossible to measure, no one seemed to doubt that Bill Clinton will continue to increase the number of people his wife can draw to events on the trail. "The last two times that President Clinton was in Iowa City, the events were at the basketball stadium," said Brian Flaherty, who chairs the local county Democratic Party. "He filled it both times." The stadium holds about 15,000 people.

On Monday night in Des Moines, the crowd appeared to range somewhere between 1,500 and 3,000. Hay bales were brought in to frame the couple as they took to a stage surrounded by metal bleachers and American flags. It was not hard to see Bill Clinton's pleasure to be back in the game he always seemed to win before. "I like the other people running for the nomination," Clinton told the crowd. "Senator Biden, Senator Dodd and Governor Richardson, they have rendered enormous service to this country and they deserve our respect." He paused a beat, long enough for everyone in the crowd to think that he would not mention his wife's strongest rivals, Obama and Edwards. "And I like to hear what Senator Edwards and Senator Obama have to say," he said finally, in a masterful demonstration of nuance the current president simply lacks.

Then he hugged his wife, and took his seat onstage on a stool. Over the next 30 minutes, he looked up at her, as if in wonder, laughing at her jokes even though he had heard them all before. The torch had been passed, sort of. "If you help me, if you caucus for me, I promise you I will work my heart out for you," Hillary Clinton told the crowd at the end of her address. "I will have good help along the way. And we will once again be proud to be Americans."

Fireworks began to explode in the night sky, and the Jesus Jones song "Right Here, Right Now" began blaring from the speakers. The former first couple dipped down into the crowd to shake hands and sign posters. As they made their way along the barriers, Bill led the way, and Hillary followed a few feet behind. The voters clamored for both.