I now pronounce you ... one unbelievably crappy movie. 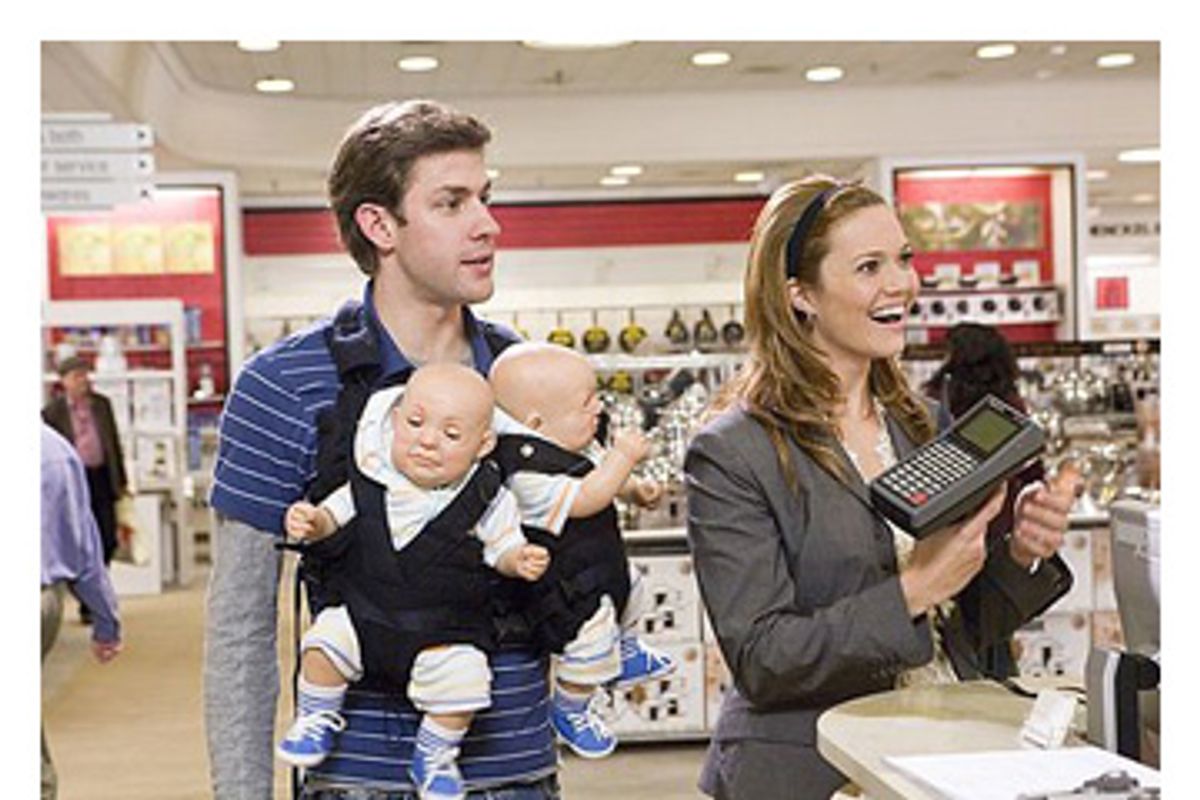 "License to Wed's" Ben and Sadie are the kind of beautiful Mars and Venus who exist only in romantic comedies. She's a bouncy Chicago florist; he's a baseball-cap-wearing coach. They meet in the latte line at a Starbucks, and a love born of the mutual taste for $5 coffees soon blossoms. Before long, Ben is down on one knee, and Sadie is accepting his proposal by declaring, "I would marry you tomorrow in a potato-sack dress if it meant spending the rest of my life with you."

Of course she doesn't mean it.

In the next breath, she's shooting down Ben's idea of a tropical elopement with her own fairy tale. All her life, Sadie has had her heart set on getting married at St. Augustine's -- the church her grandfather helped build and where her own parents took their vows.

Said house of God is run by the Reverend Frank (Robin Williams), a longtime family friend whose church, Ben (John Krasinski) and Sadie (Mandy Moore) soon discover, is popular enough that it's booked two years in advance. At this point, any other overscheduled urban couple might decide that's just about enough time to get the Vera Wang and the reception hall and the right band. Instead, when Reverend Frank mentions that a cancellation has created one opening for just three weeks from the present, Sadie gleefully leaps for the slot.

The hitch to their hitching is that the couple must complete the Reverend's marriage preparation course, a series of trials that would make Heracles cry but, the Reverend assures, has a 100 percent success rate.

Does Reverend Frank merely expect them to get in touch with their shared values, explore how they'll resolve conflict? No, Reverend Frank needs to control every aspect of their lives until -- and if -- they walk down the aisle. He makes them swear off sex until the honeymoon, a plan Sadie naturally has no trouble with but one that may just kill her horndog fiancé. The Reverend has them engage in assorted humiliating role-playing and word-association games, the likes of which most of us haven't seen since the apex of the disco era. He shames them before the congregation when they arrive late for services. He tests their potential as parents by marching them through a maternity ward and forcing them to carry around some pretty expensive-looking crying, excreting baby dolls.

Yet Frank, who seems to sadistically relish putting his couples through their paces, is portrayed as merely a wily prankster, aiming to impart a few warm lessons in commitment via such potentially fatal tests as having the bride drive blindfolded down the street. Awwwww. For good measure, he even bugs their apartment and listens in on their private conversations, a strategy that suggests the Reverend has seen "Meet the Parents" a few times.

The difference between "License to Wed" and "Meet the Parents," the film it so dearly wishes it were, is that the earlier movie had Robert De Niro as a man whose cloak-and-dagger past suited his menacing, ridiculous techniques with his daughter's suitor, and it had Ben Stiller, whose wound-up, Speedo-sporting Greg Focker was a perfect foil for his would-be interrogator.

Instead, "License to Wed" may be the longest, unfunniest promo for a TV show ever. It's directed by Ken Kwapis, who has helmed several episodes of "The Office" as well as "The Sisterhood of the Traveling Pants." And "Office" fans will recognize not only Krasinksi, but also three of his costars in cameo roles.

On "The Office," Krasinski's dryly cynical, sweetly vulnerable Jim may be the prime-time viewer's favorite imaginary boyfriend. Here, however, he looks embarrassed and lost, spending most of the movie smirking and bulging his eyes. Meanwhile Mandy Moore, who has let her darker side shine in movies like "Saved" and "American Dreamz," is reduced to flipping her hair to show her character's range of two emotions: happy and rilly, rilly frustrated.

Then there's Robin Williams, as a pastor who acts a whole lot like Robin Williams, smiling genially while channeling M.C. Hammer, Elvis, "Family Feud" and a borscht belt's worth of musty wisecracks.

But if the leads are sketchily drawn, the supporting cast is a collection of stock characters grafted into a nightmare uglier than a bridesmaid's gown. Looking for the pretty girl's rich, successful male friend who seems a better match for her than our hero? Check! Her fusty grandma with a drink in her hand? Check! Her bitter, recently divorced older sister? Check! What about the guy's wisecracking African-American buddy who's into Sizzler and strippers, the one with a harpy wife and some feral kids? Sure! Midriff-baring fat guys belly-dancing and pouncing on potato skins? You bet!

Despite its fuzzy, getting-to-know-you message, the movie itself offers zero motivation for any of its protagonists. Why does Sadie rely on her male buddy more than her boyfriend? Why do her parents hide stiffly behind their cocktails? And mostly, why is Reverend Frank such a creepy know-it-all? Frank has a perfect track record of divorce-free marriages, but the only relationships in his own life are with his dog and his young protégé (Josh Flitter), the sort of wisecracking, overweight boy one usually has to prowl the CBS prime-time lineup to find. He's Reverend Frank's accomplice, lackey and, conveniently, a child who seems to have no parents or bedtime.

While "Knocked Up" affirmed that adult responsibility, in all its poopy-diapered, too-tired-to-screw glory, is indeed often less appealing than bong hits with your buddies, it also unsentimentally embraced the exhilarating satisfactions of family life. "License," in contrast, makes no convincing case for the pain and humiliation it puts its victims through, other than the medicinal notion that Reverend knows best.

Although Ben does belt the Reverend once in the course of their trials, he and Sadie never join forces to tell him to shut the hell up. They struggle and flail a little, but eventually -- gratefully -- recognize his wisdom. When Sadie voices concern over failing the class, he soothes her by saying, "Who says the course is over?" And that's what makes "License to Wed" so maddening -- its contrived insistence that this pop-psychology-spouting, bedroom-spying pastor knows what the couple needs better than they themselves do. Just do what the man in the collar says, it suggests, and it'll be all right. It's an offensive idea, one we get enough of in real life. And worse? It's not even funny.